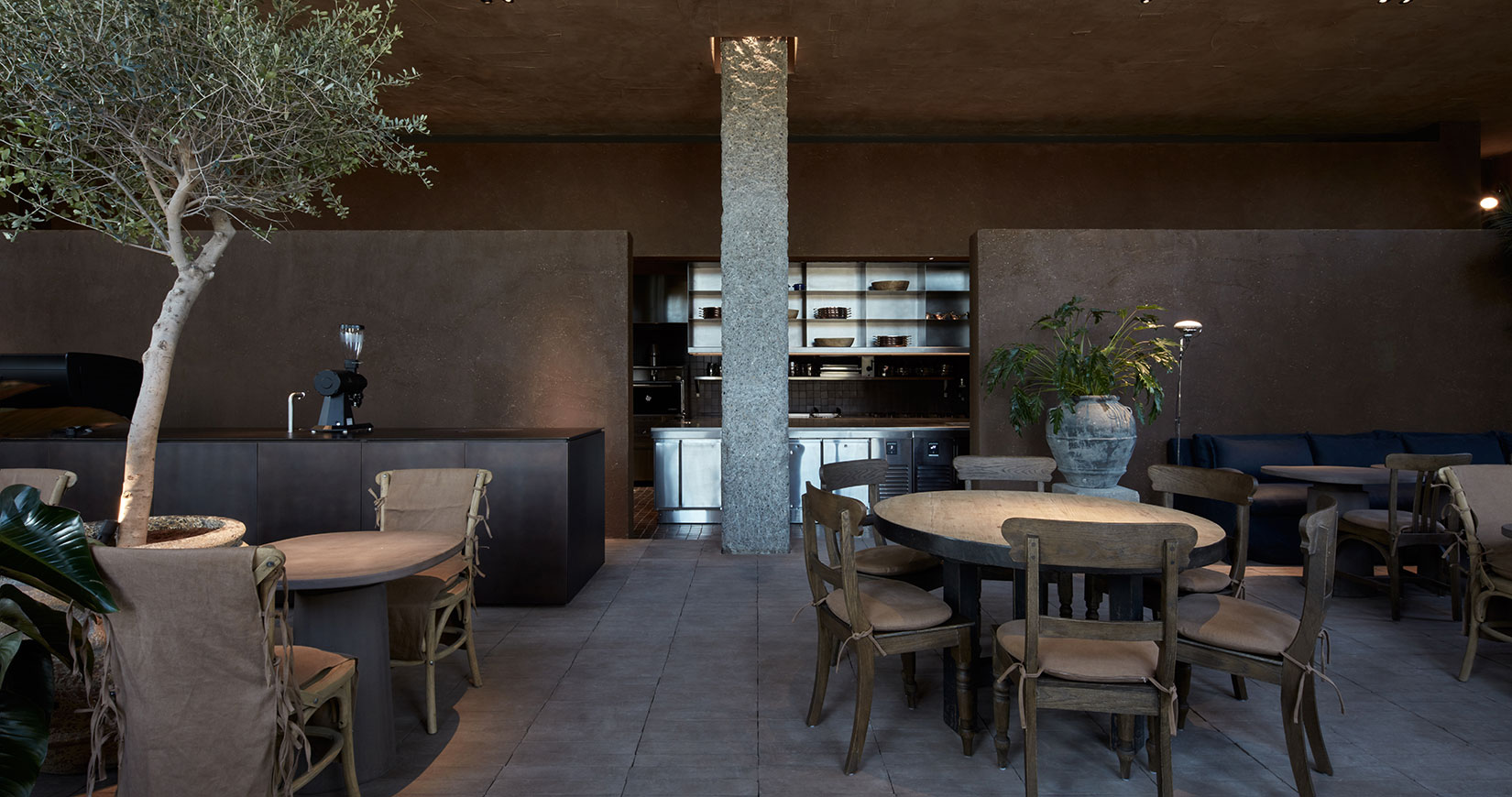 With its name rooted in the Latin word for ‘Earth’ or ‘land’, Terra is a new eatery in Dubai, UAE that acts as a natural retreat from the urban bustle of the city, exposing the raw surfaces of its construction materials which are offset with deep greens from the wild foliage.

Designed by self-proclaimed ‘nomadic studio’ Bone, Terra is not unlike the young practice’s minimal yet robust portfolio of projects that focus on honest, natural materials and brutalist references juxtaposed with textured warmth. In this particular project, creating a sheltering atmosphere was imperative, Bone says. 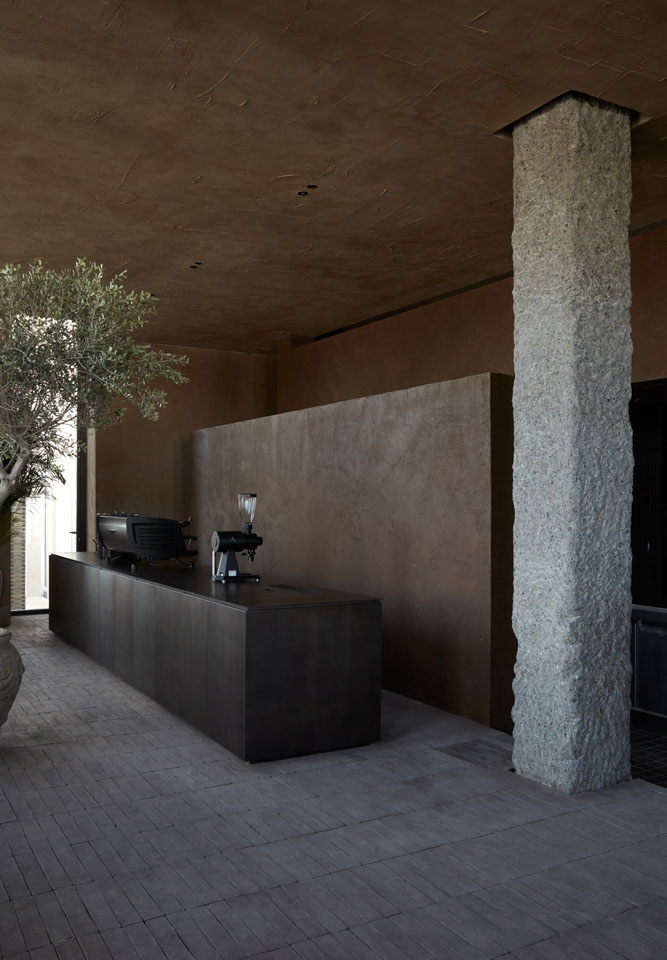 “We wanted to celebrate the elements of raw architecture and invite people into a unique and rich space. The textures all play a role in encouraging the inhabitants to relate to the space in a way that is imperfect, yet strong,” explains Natalie Mahakian, who co-founded Bone, alongside partner Achraf Mzily.

The interior space is reminiscent of a courtyard, complete with a lush garden that envelops the shop while interweaving between the various seating areas in the dining space. It additionally acts as a natural barrier between the eatery and the street level, which it opens up to. 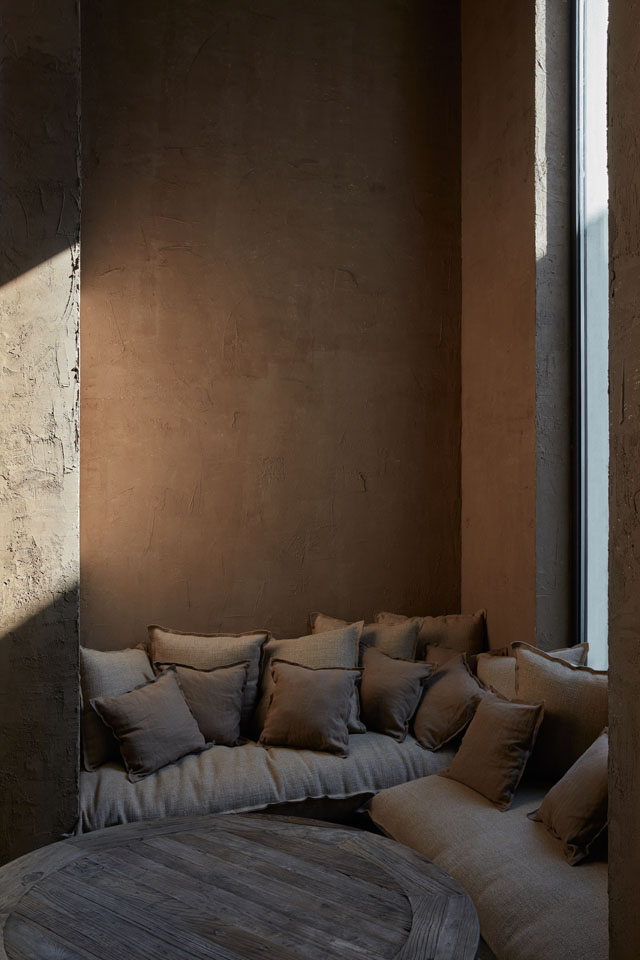 “We were inspired by nature and rural architecture that brings  people together through its construction and hands-on approach. Indoor and outdoor areas both show examples of imperfect features that come together to make one jubilant space. The greenery and trees that are outside converse with the ones inside, uniting both spaces,” says Mahakian.

More: Read  February’s ‘The Land Issue’ – Note from the editor 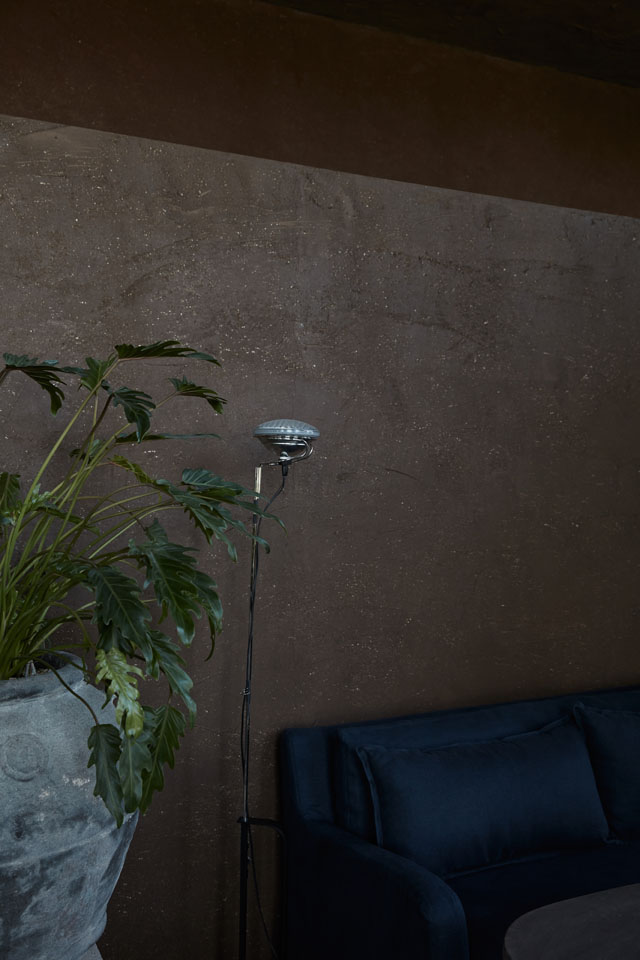 Five-metre-high pivoting glass doors welcome visitors to the interior dining space from all three façades, while the shop faces the east, allowing sharp rays of sunlight to penetrate through the clear glass doors during the brisk hours of the day. The sunlight also exposes the hues and undulations of the clay walls and the uneven surfaces of the terracotta tiles used across the space. 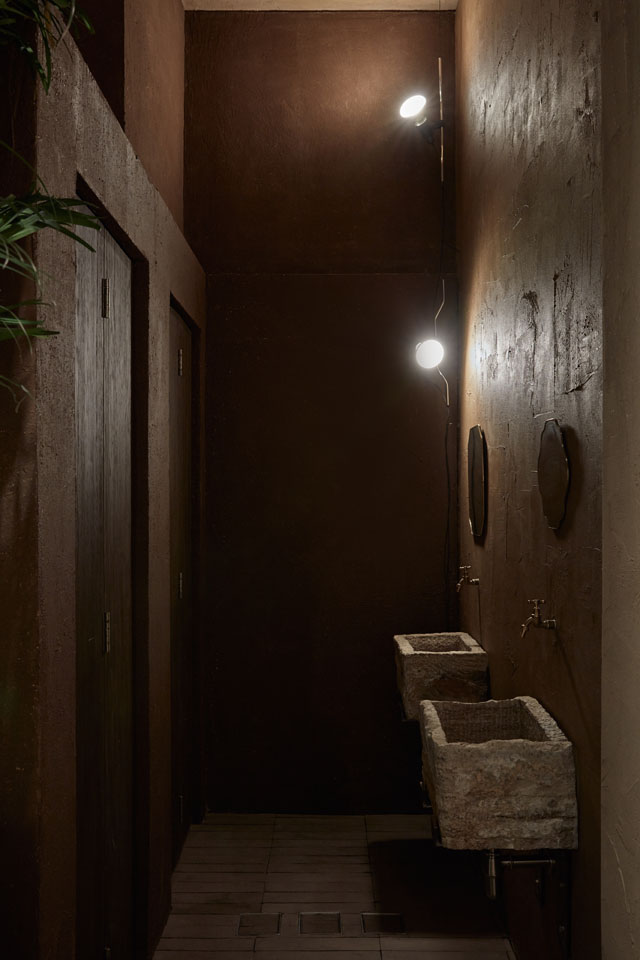 Traditional construction and application techniques are exposed throughout, evoking a sense of natural and homelike hospitality while lending itself to a blurring of the boundaries between architecture and craftsmanship. Several specialists aided Bone in bringing the space and its elements to completion. 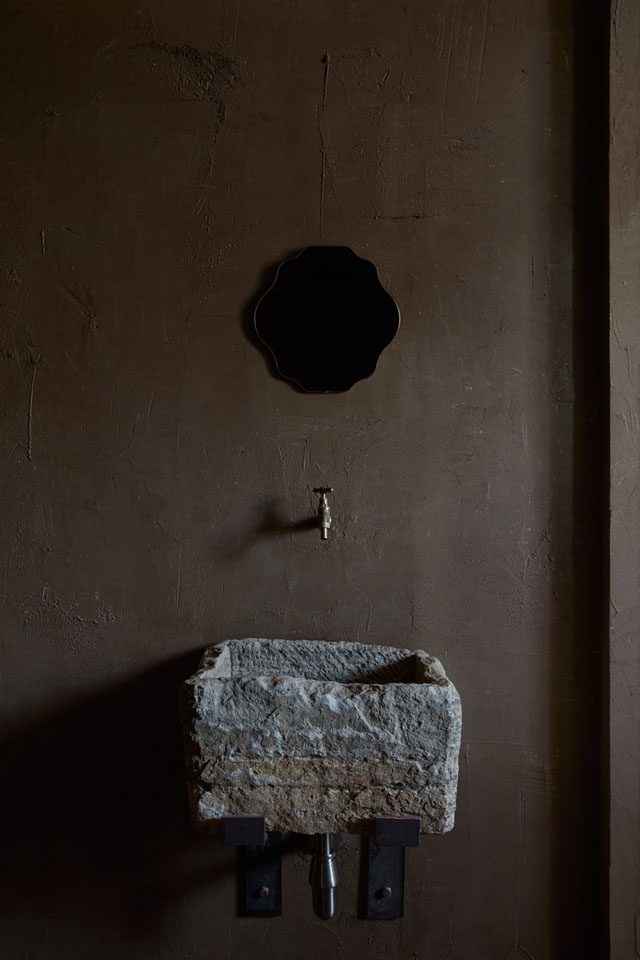 The raw earth surfaces, which emulate different colours, are natural and pigment-free, using clay that has been sourced from different parts of Italy by Matteo Brioni, who developed the traditional raw earth surface finish to be healthy, hypoallergenic, versatile and sinuously adaptable to any surface. Matteo’s brothers, who own Fornace Brioni, have also collaborated with Bone to compose the terracotta floor tiles that grace the space with their imperfections and artisanal craft. 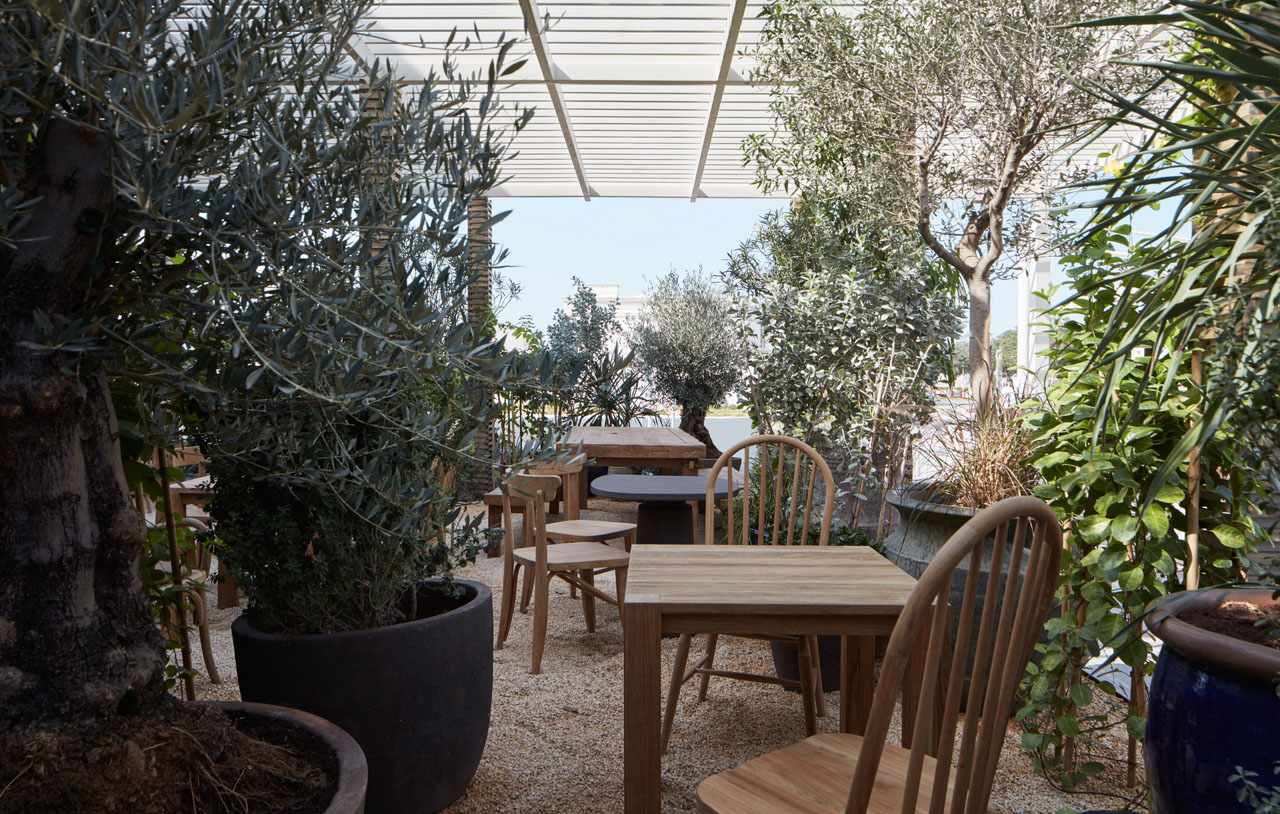 “The finishes in the restaurant, from the floor to the walls, are all composed using traditional means of manufacturing. The terracotta tiles on the floor are different from one another because of the handmade trace that makes the tile special. The texture on the walls is all applied by hand in an artistic manner. No two walls or tiles are the same,” says Mahakian. 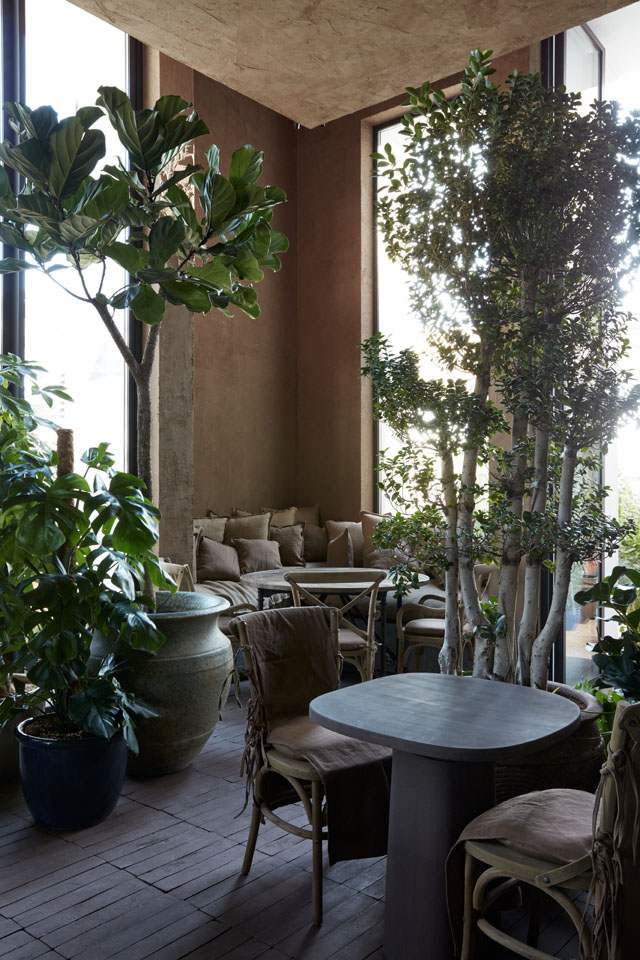 A slot punctuated in the cacao walls frames the hand-hammered column at the centre of the space, displaying the tailor-made kitchen that allows guests to enjoy the culinary energy on view. All equipment is integrated, producing a refined working space with seamless counters. 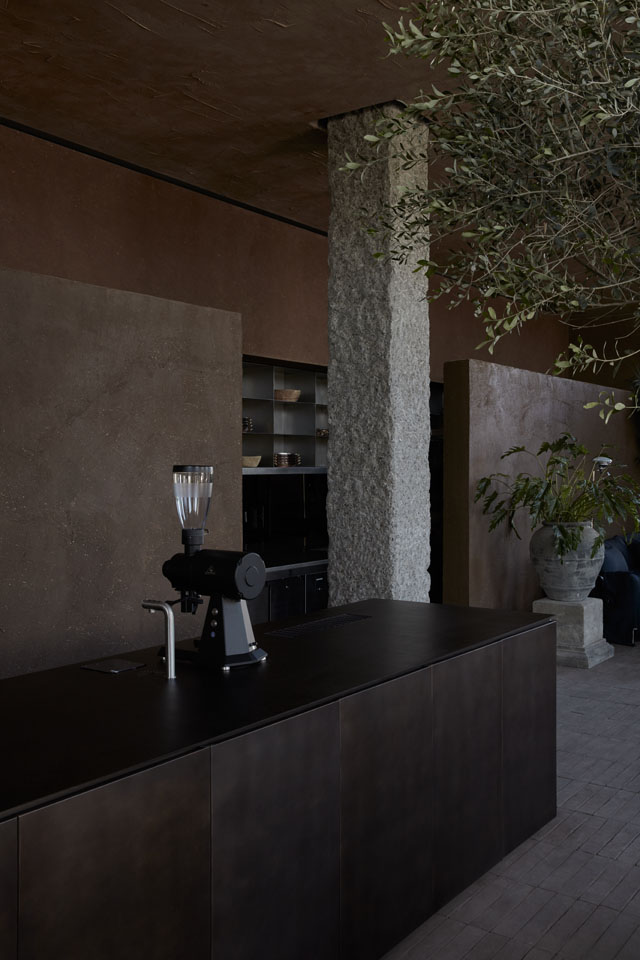 Essentially, it is the earthy materiality and hues that play a vital role in the intimate ambience of the space, in addition to its monochromatic palette. Moreover, the studio considered additional materials for the project to enhance its sense of warmth, such as reclaimed and weathered wood, linen fabrics, smoked metals and handmade ceramics. A romantic atmosphere is further established using specifically arranged spotlights by Flos that dot the interior space. These elements come together to soothe the otherwise brutalist forms found across the space, just as they do in many of Bone’s other projects.

“Brutalist forms are known to be cold and sterile volumes that come together,” Mahakian says. “In Terra, we wanted to reexamine how Brutalism can also be warm and inviting…when combined with traditional craftsmanship.”