Casa Eterea responds to the isolationist demands of today's travelers Mirrored buildings exist the world over, from Saudi Arabia to Italy, Sweden to the Netherlands. Typically situated in isolated locations so as to maximise their ability to reflect their environments, such structures often walk the line between art and architecture. Joining the ‘mirrored building’ camp is its newest member – Casa Etérea, an off-grid hideaway conceived by Mexico-based Singaporean writer Prashant Ashoka. 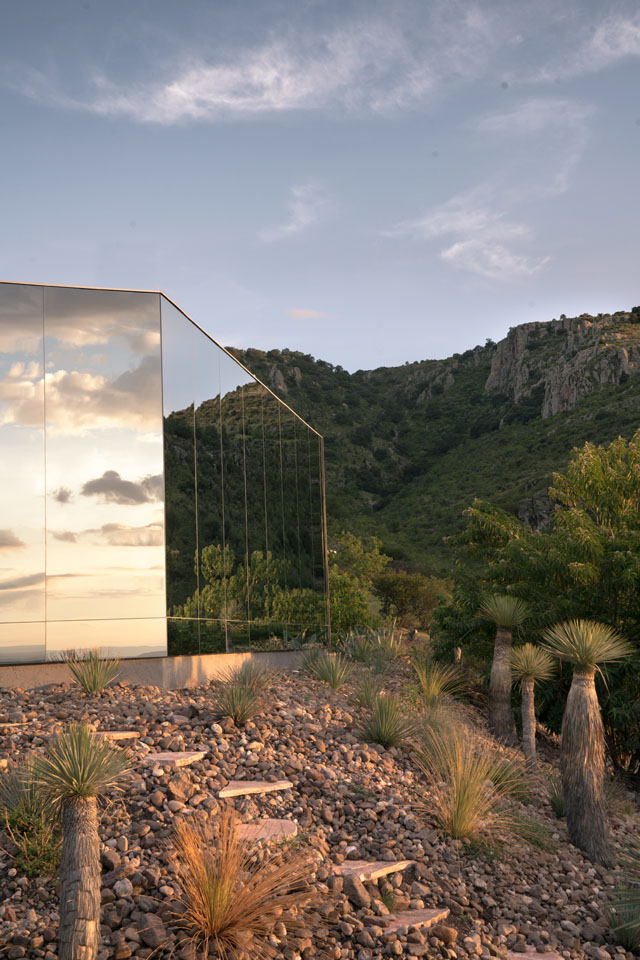 Spanning 75 square metres and located a 20-minute drive from the UNESCO World Heritage Site of San Miguel de Allende in Mexico, Casa Etérea (or ‘Ethereal House’ in English) not only responds to the isolationist demands of tourism for the foreseeable future, but also to pressing climate issues by drawing all of its power from solar energy, and its water supply from collected rainwater. Distinguishing it from its architectural predecessors, the new home also uses a patterned ultraviolet coating on its mirrored exterior, making it visible to birds while remaining reflective to the human eye. 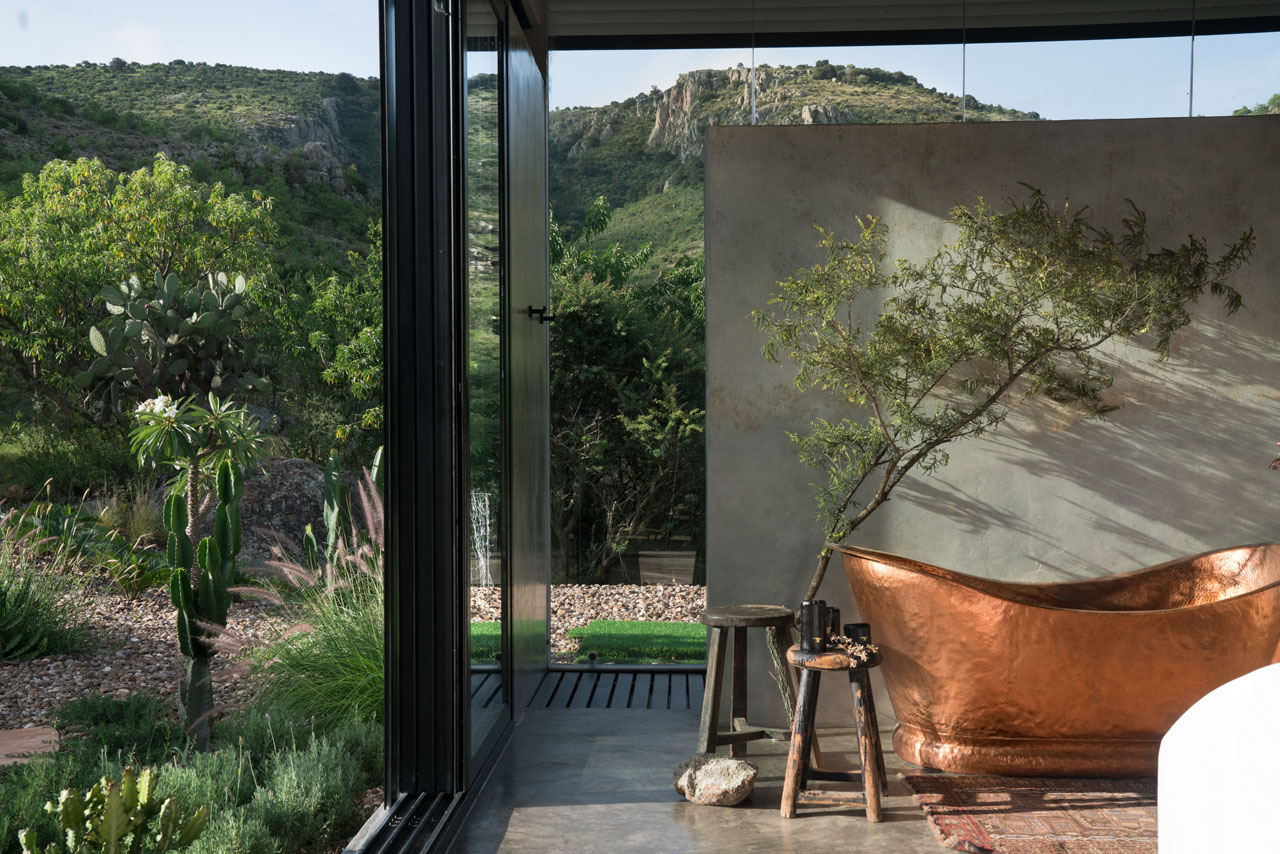 Ashoka first came across the site while visiting San Miguel de Allendr, one of the most visited towns in Latin America. He felt drawn to that particular region and explored the area surrounding the Palo Huérfano volcano, which sits just outside of the city limits. For him, the site was a “pristine plot of land with towering cliffs”, and the beauty of the dramatic landscape proved to be seductive. “I knew immediately that it would be the perfect place to build a retreat where people could connect with nature,” says Ashoka. 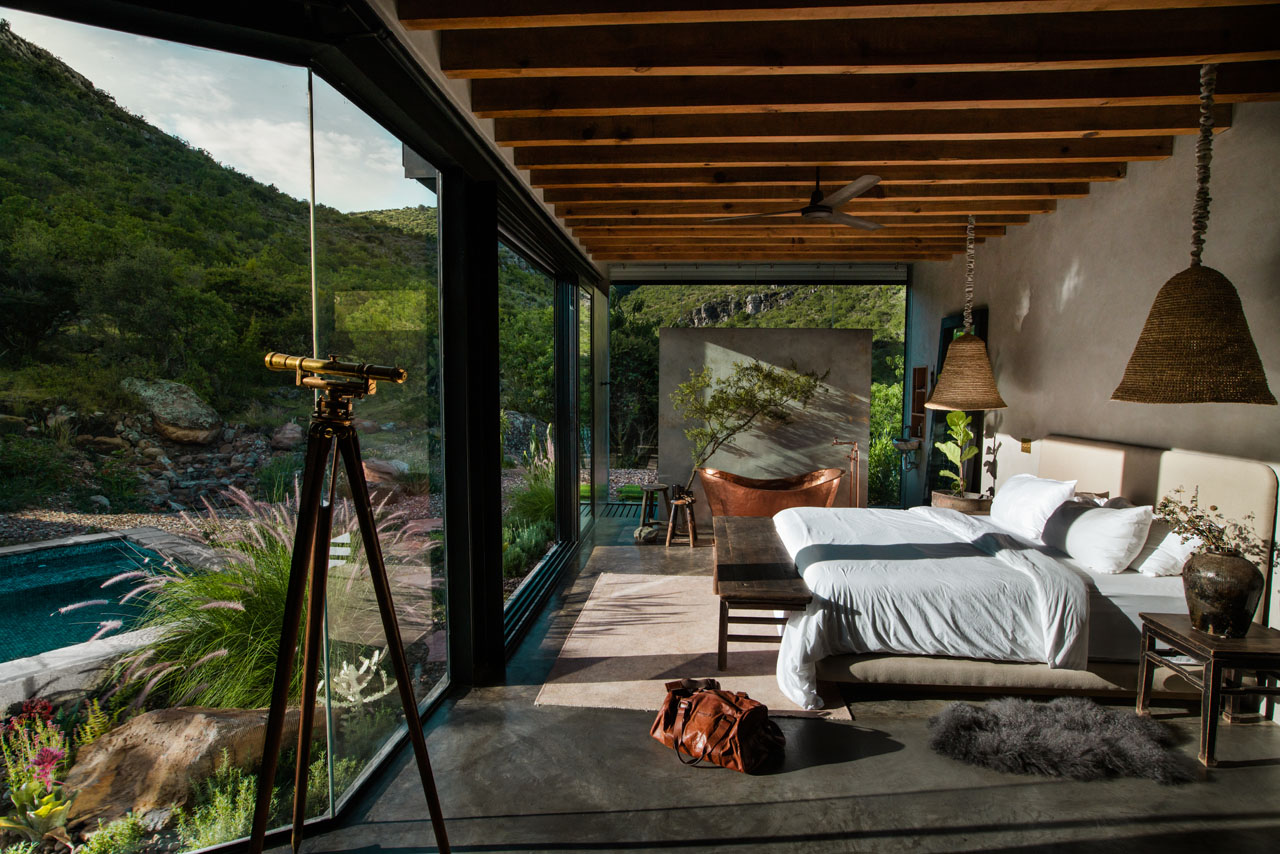 Casa Etérea consists of an open-plan space with two rectilinear volumes that merge at a 120-degree intersection. It features a bedroom, seating area, washroom, dining area and outdoor pool. Conceptually, Ashoka’s plan was to create a “theatre to nature”, and he worked with the intention of leaving the landscape minimally impacted. Thus, the foundation of the house was built entirely from rock collected from the nearby Los Picachos mountain range, and by situating the house according to the site’s orientation, it manages efficient ventilation. “The house naturally regulates temperature in the semi-arid desert climate of the central Mexican highlands,” he adds. 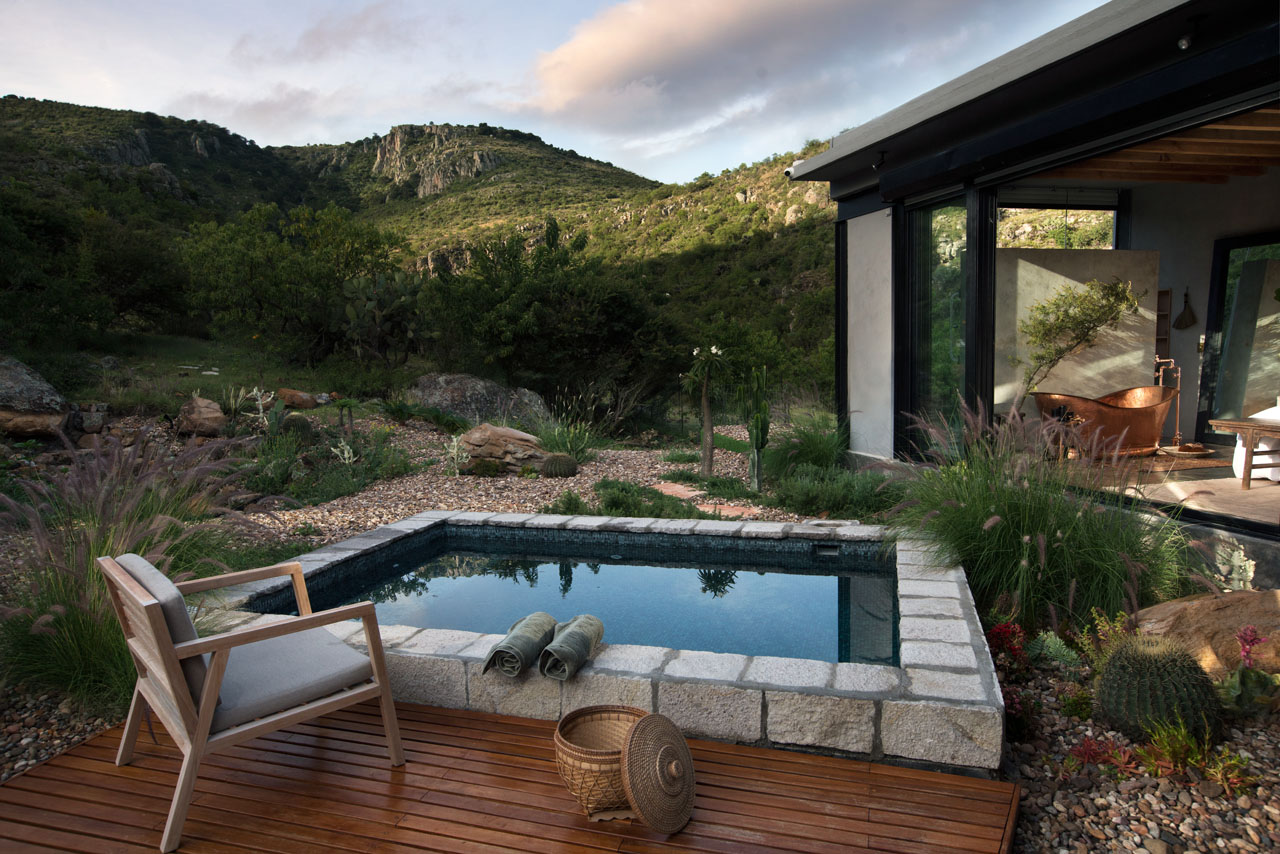 Bringing Casa Etérea to life required a large team effort: Ashoka worked with NAMUH for the interiors, as well as glass and mirror designer Oskar Chertudi Maya. Gabriel Lopategui offered project design consulting, and Octavio Cambron Munguia oversaw the landscaping. Project management was handled by Mario Gonzalez, and Antonio Santana took on the pool and solar design. And while there were many cooks in the kitchen, the group was collectively inspired by the concept of ‘emotional architecture’. Coined by renowned Mexican architect Luis Barragán and sculptor-painter Mathias Goéritz, the term refers to designs that appropriate colour, light and space to create nuanced emotional characters. 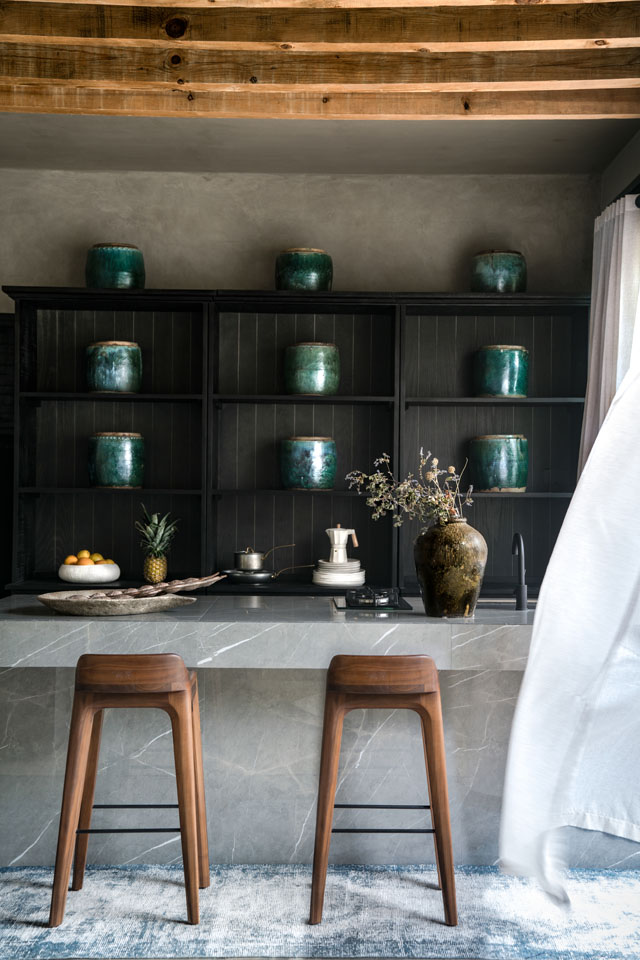 “I was very moved by Barragán’s emphasis on light and shadow,” says Ashoka. “These intangible aspects of design lend great emotion to spaces, and I wanted to use light as a ‘structural’ element to my design.” 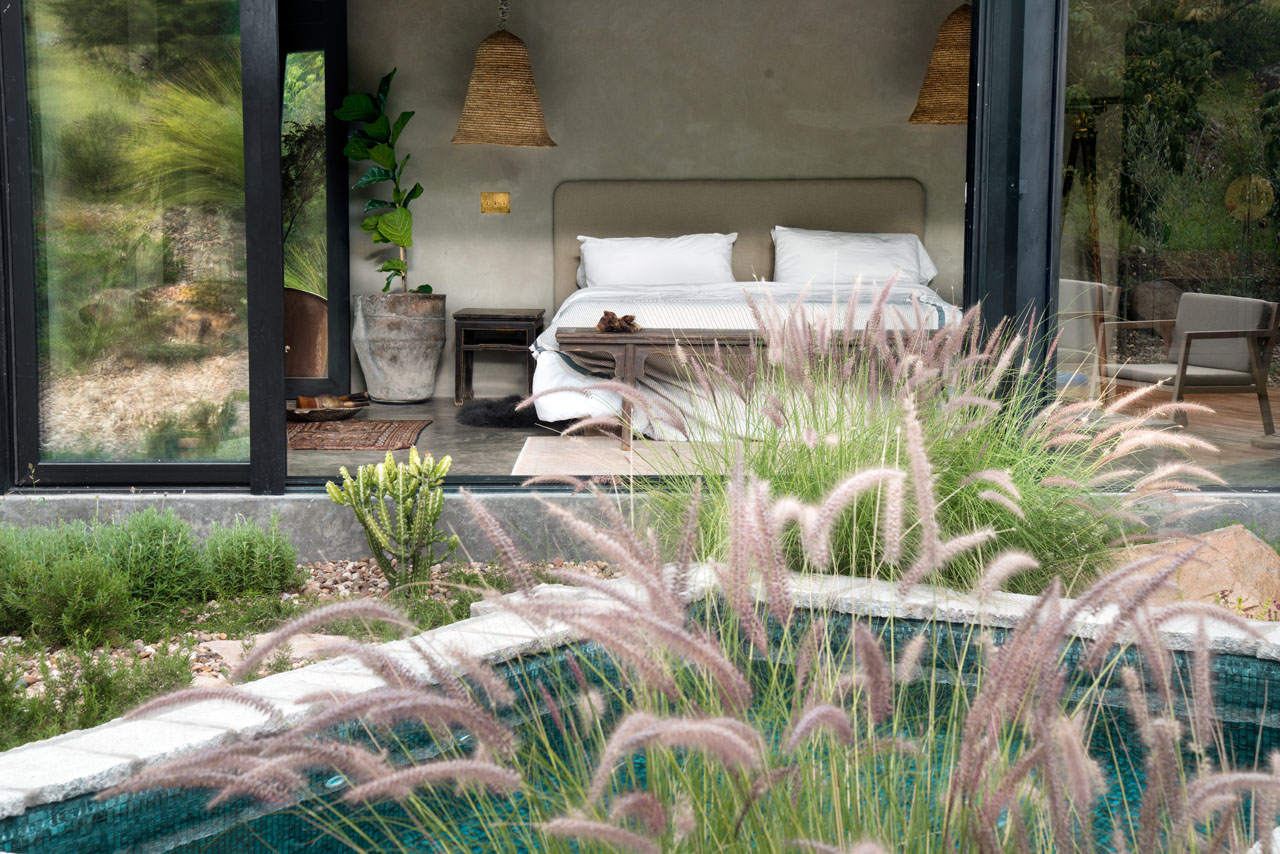 As the mirrored façade catches the first light of the day, it beams as a phosphorescent blue-tinted box, contrasting greatly with the blackness of the mountainside. While in the warm orange and red hues of the sunset, the house appears like a mirage, before disappearing as nightfall creeps in. The mirrored panels further create a visual abstraction and interactive experience by diffusing the space between the landscape and the structure. This allows the volume to take on a transitional quality, says Ashoka, as it reflects the change in seasons. For the interiors, Ashoka and NAMUH opted for organic materials, such as wood, stone and ceramics, as they wanted the space to be “warm, inviting and earthy.” Throughout, exposed ceiling beams and concrete walls combine to create an unimposing backdrop for statement pieces, such as the copper bathtub and the soft leather seating. And while the interiors were designed with intent, it’s light and shadow that provide character to the space; as do the views of the soaring cliffs. 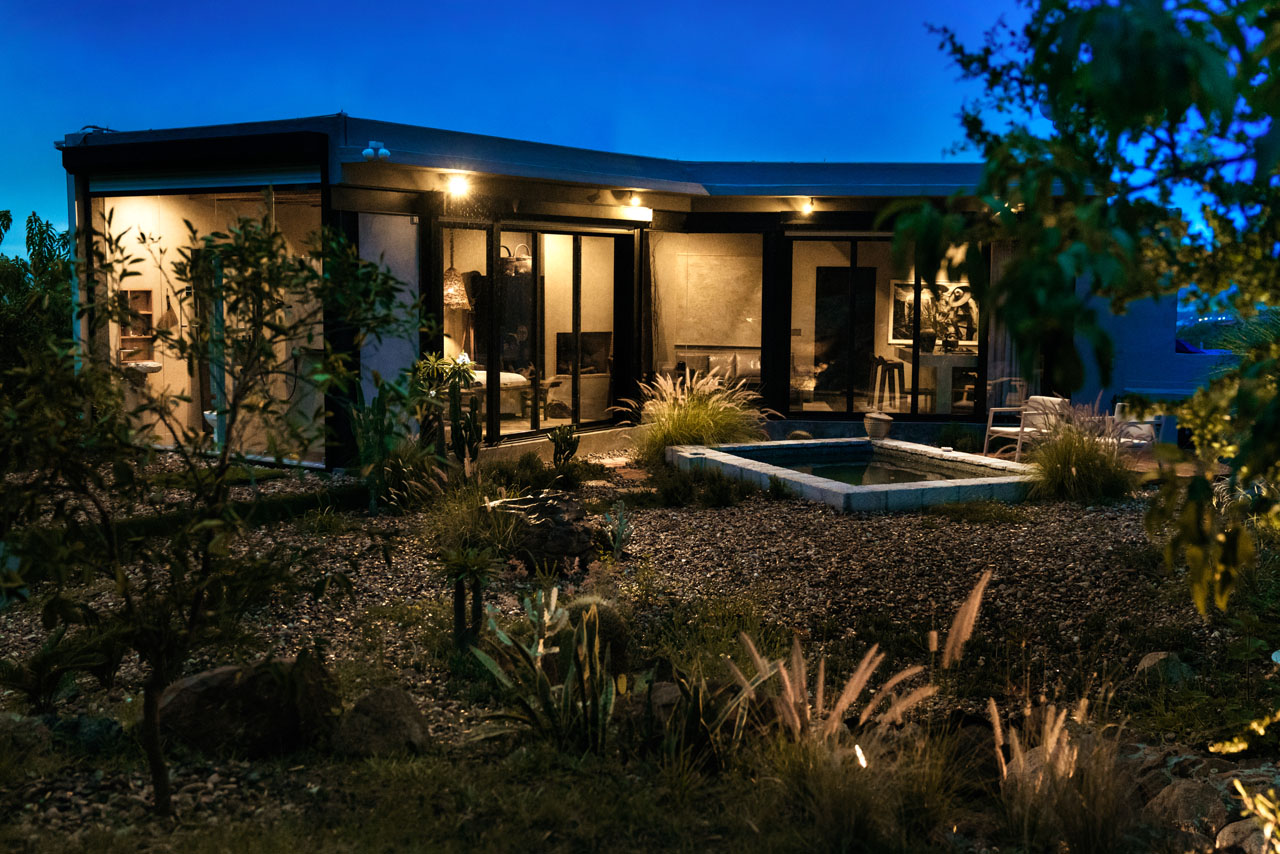 “I wanted this interplay of light and scale to evoke a deep sense of awe and oneness with the wild,” says Ashoka, “and to ultimately beg questions about our role as stewards in the preservation of our ecosystems.”

Have you subscribed to identity’s weekly newsletter yet?