HomeDesignYinka Ilori reflects on how his colourful work impacts heritage, inclusion and multiculturalism in design
DesignFeaturedInterviewsProfiles 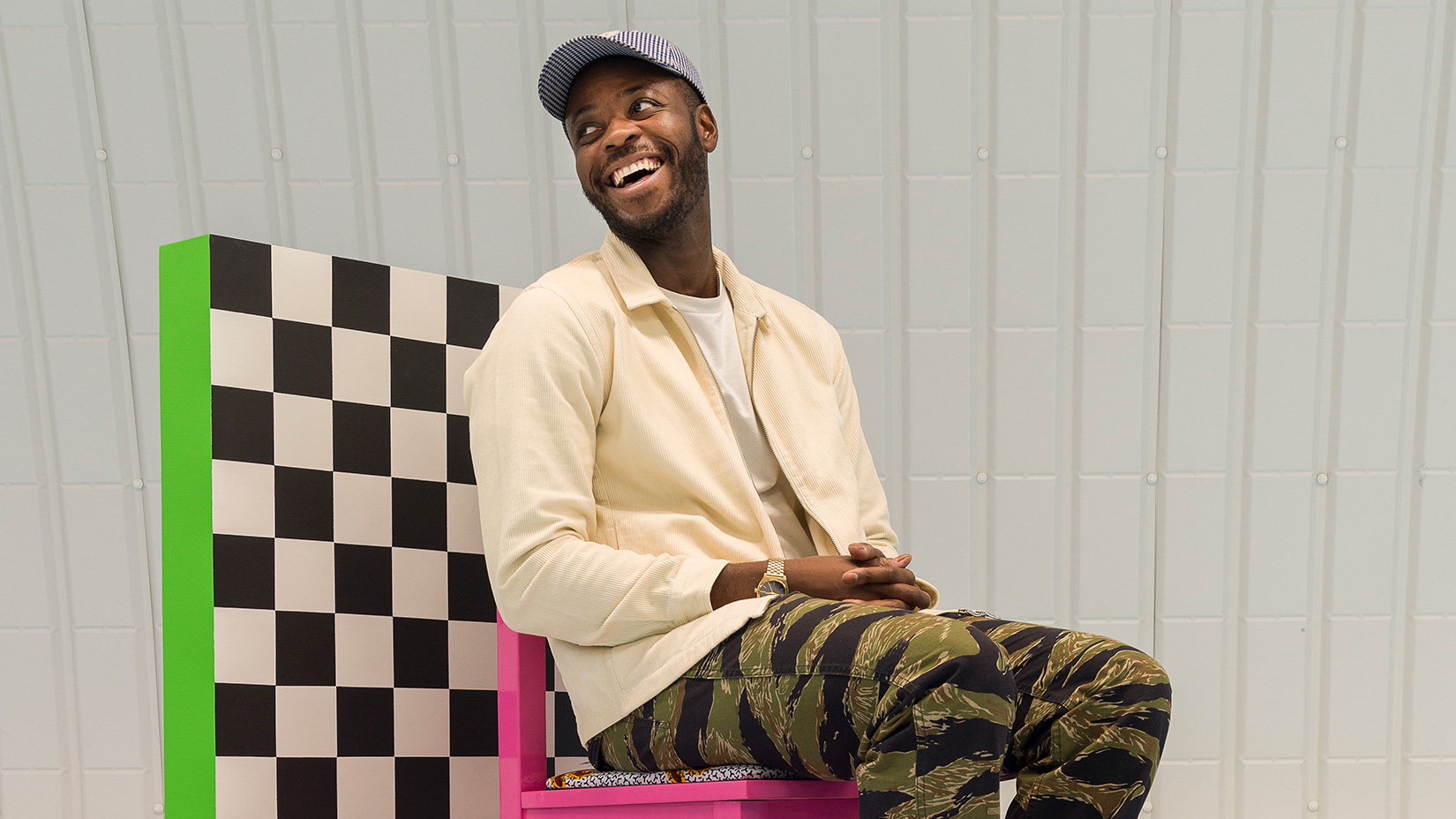 Yinka Ilori’s work is instantly recognisable. With its confident use of saturated colours and playful patterns inspired by West African culture, the British-Nigerian designer continues to make his mark on the design scene – on his own terms.

“If you can, depict a scene where you’re in Lagos,” says 33-year-old British-Nigerian designer Yinka Ilori over a Zoom call from his studio in North Acton, London. “It’s busy, there’s sunshine, everyone is wearing colour. It’s pretty special. I try to bring those scenes and that culture into my work.”

Ilori’s parents moved to the UK from Nigeria in the 1980s. He was brought up in Islington in north London, but growing up in London was difficult for someone with a dual identity, he recalls. “You are told that, while yes, you are in London and yes, you are British, you are also Nigerian, you are not English – don’t ever get it wrong”. Exploring this duality in his identity is a strong theme in Ilori’s work that draws immediate parallels with his upbringing.

“My Nigerian-British heritage has given me a subject matter that I can talk about. If we are talking about sustainability in Nigeria or vernacular architecture or colour, fabrics, lace. There is so much history that I can dig into, such as post-colonialism, slavery; there are so many layers of history that I can talk about and reference in my work. I know that I will never run out of stories or inspiration because it is literally all in the motherland.”

Ilori began his career by readapting chairs as part of a project assigned to him by his tutor Jane Atfield during his studies at the London Metropolitan University, inspired by Martino Gamper’s 100 Chairs in 100 Days. The process of finding something that was discarded and giving it a new life and narrative was attractive to Ilori, who thrived off storytelling – something he also attributes to the rich oral tradition of telling parables in Nigeria. He also adds that he was “a shy designer and a bit of an introvert”, so creating objects that told their own stories offered a level of comfort where his work would speak for itself.

“For me they were never just chairs, they told stories, they held feelings, they held emotions. We cry on a chair, we argue on a chair, we love on a chair. They are such powerful objects and I think sometimes, we take these objects for granted because they are so accessible, but also so disposable.”

He also loves the community spirit and spontaneity of everyday objects – something he recognised in the way objects were treated in his parent’s village in Nigeria. People around him would use these objects as seating – be it a concrete block or an old tire, allowing them to become part of the community and form conversations.

“I think for me, just seeing how everyday objects are used to create spaces is powerful and how they create a sense of hierarchy in these spaces. For example, in my household, my dad has a chair that he likes to sit on, and it just shows this connection with an object and how this object is given power or status,” Ilori explains.

He launched his first collection in 2015, at a time where he was growing increasingly frustrated with the design industry in the UK. “For me, design wasn’t a very inclusive space that celebrated different cultures and it wasn’t inclusive for people of colour. It was quite an elitist thing,” he shares.

Ilori says that things are definitely changing now. “If we look at what is happening around the world with Black Lives Matter, a lot of industries have been called out for their lack of diversity especially at the top, which is where the change starts. It is a slow transition and it isn’t going to happen overnight. People are always scared of change and what change can bring, but for me, I love change and I’m always excited for change.

“There are so many voices and so many stories still to be heard in design. I think once the design industry, not only in London but around the world can celebrate people of colour and celebrate designers from different backgrounds, allow them into the industry and allow them to tell their stories, you will see a huge change in design. Not only in what you see aesthetically but also in how the public can enjoy the work that is being put out.”

Back in 2015, being someone who belonged to two different cultures wasn’t a narrative that he felt was encouraged or understood within the design industry. Nor how that experience could translate into a piece of furniture. “I don’t think they understood it, and I don’t think the industry was ready to see something like that,” he says. So, Ilori decided to produce a body of work completely on his own terms. “It changed my life.”

He self-launched a collection of five chairs called ‘If Chairs Could Talk’ that was inspired by five people with whom he grew up: each chair embodied their stories and reflected a parable told to him to by his parents The collection had to be real and honest, he says. The feedback was immense. Pieces from If Chairs Could Talk have since been acquired by the Brighton Museum and the Museum of London and have been exhibited at the Vitra Design Museum. He cites it as his “first body of work that had a really strong subject matter.”

“I have three left in that collection, and I am saving them for the rest of my life.”

As his work continued to grow, and commissions poured in from the likes of Cannes Film Festival, Pepsi, Universal Music and Kvadrat as well as the Somerset House and the London Architecture Festival, Ilori’s work became increasingly associated with his use of colour.

“I just do it. It comes naturally to me and you know what? I’ve never had to ask myself that question.” Ilori explains that his confidence with colour stems from his parents who didn’t seek validation for the colours they wore, or the shades that they mixed and matched. “I know there is colour theory but to me, there are no rules in how you apply colour.”

Does he ever feel pigeonholed? “Yes. But, I’m over it,” he says. “It does have a shadow over my design capabilities. Sometimes someone will say, ‘oh you did the colour, and I would say, ‘no, I designed the whole thing’. So, it’s quite tough. But I’m not very bothered anymore. Not to sound arrogant, but I think being able to use colour in this way is a gift and I should celebrate that fact. So yes, I am now OK with it because colour will always be a huge part of my practice, a huge part of my life and what I do.”

One of Ilori’s biggest commissions to date is the Colour Palace, a temporary pavilion set on the manicured lawns of the Dulwich Picture Gallery in London’s middle-class neighbourhood. Created in collaboration with Pricegore, it celebrates a fusion of European and African cultural traditions, paying homage to multicultural London. A Dutch wax print on display in a Lagos market that is mirrored in London’s ‘Little Lagos’ in nearby Peckham inspired the bold geometric pattern of the pavilion, creating a powerful contrast against the gallery building designed by Sir John Soane that sits alongside it. Ilori says that the pavilion is his most rewarding project to date.

“I think it is about what it represented for me and what it did for the culture, for people of colour and what it did for multiculturalism. It made people feel like they could go to a space that they weren’t able to go to before or didn’t feel comfortable going. It allowed people to mingle in ways they maybe wouldn’t have before. It brought black people, white people, Asians; every race together. It unified people. And I think that is very powerful and that is what architecture should do. It should be able to allow all people to feel a sense of belonging.”

Ilori also believes in the power of design to create joy, positivity, hope and an opportunity to make memories. During the London Design Festival, he collaborated with a non-profit social enterprise, Restoration Station, working with people in addiction recovery to upcycle furniture that was later auctioned and donated to the organisation. He has overhauled a “gloomy underpass” in south London with vibrant colours and bold patterns through a project called Happy Street, creating a welcoming space for pedestrians and cyclists that the community can be proud of. His latest public art project with the NHS in light of the COVID-19 pandemic features a mural that reads: ‘better days are coming, I promise’.

Ilori has also recently unveiled a milestone project: three shop windows for the Selfridges department store in London as part of an initiative called Project Earth, which he says has “always been a dream of mine”. The three shop windows are called ‘Dedications to Earth’ depicting different natural landscapes using everyday materials to provoke questions about people’s relationships with nature and waste.

“I discuss tough topics, but I always try to finish off with a positive message and I always try to do it in a more subtle way so it’s not just saying ‘life is so amazing’, but that this is what is happening. But we are allowed to be positive and we are allowed to be hopeful. I think as a designer and as an artist, I have the responsibility to give people some kind of compassion, hope and joy, because life is tough.

“I usually ask people, ‘what’s the first thing you do when you see my work?’ and a lot of people answer that they smile. If a person sees my work for the first time and their initial reaction isn’t positive, then I would feel like I have failed. I want to create joy in my work.”