Life during the pandemic has been hard for most, leading many to decide that it was time for a change. This was the story for a couple of computer science professors (she is Italian, he is German) with two children. “They wanted to have more space,” says Russian-born architect and interior designer Maria Duborkina, founder of Switzerland-based MD Creative Lab. “They realised it during the lockdown and moved to this new place.” 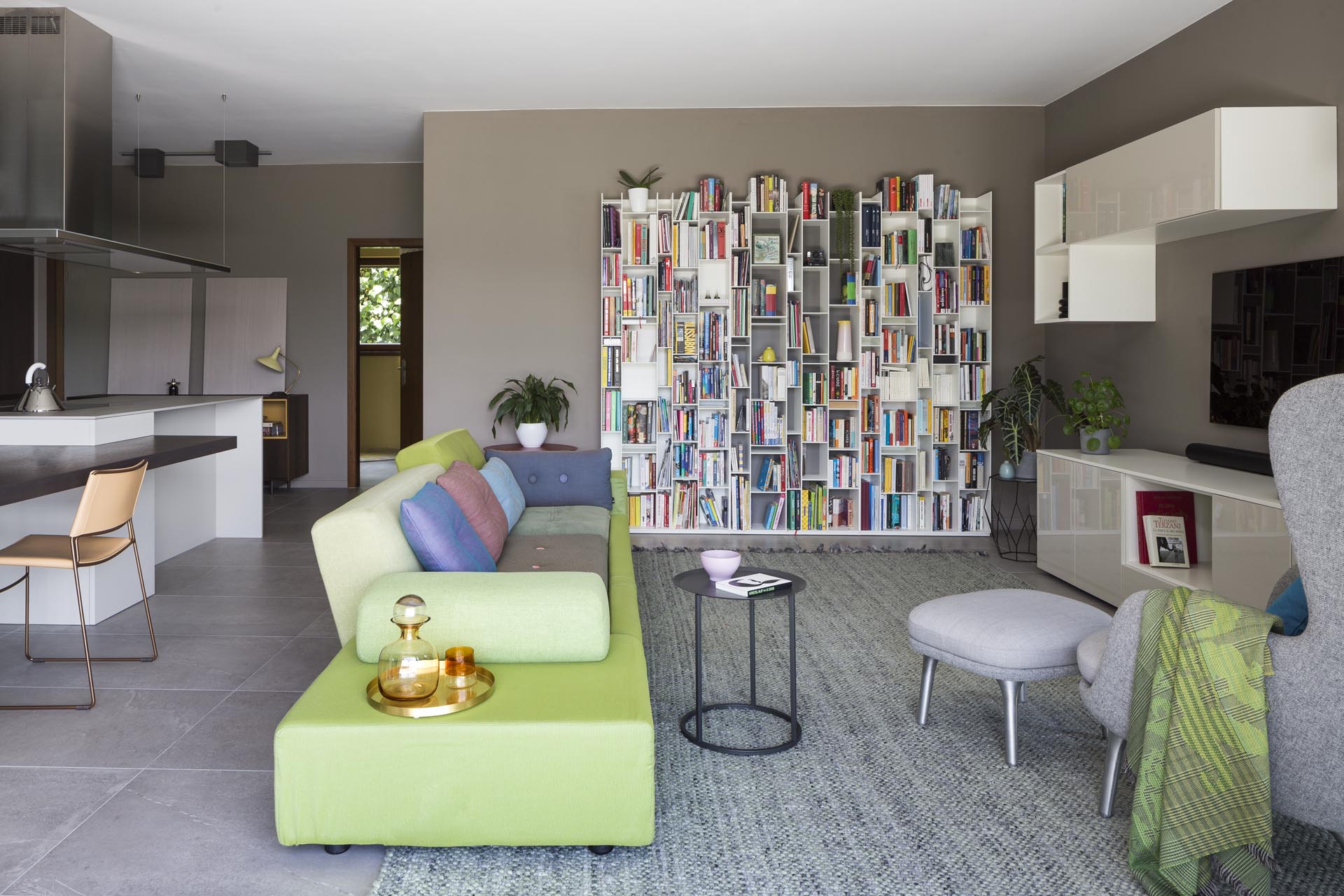 Located on the ground floor of a two-storey house – which originally dates back to the 1950s and sits perched on a hill just above the Swiss city of Lugano – this 115-square metre apartment provides lake views, in addition to having a garden and swimming pool. “The project was designed, implemented and completed in four months, with Christmas holidays in the middle of it,” remembers Duborkina, who didn’t hesitate to tackle the challenge. 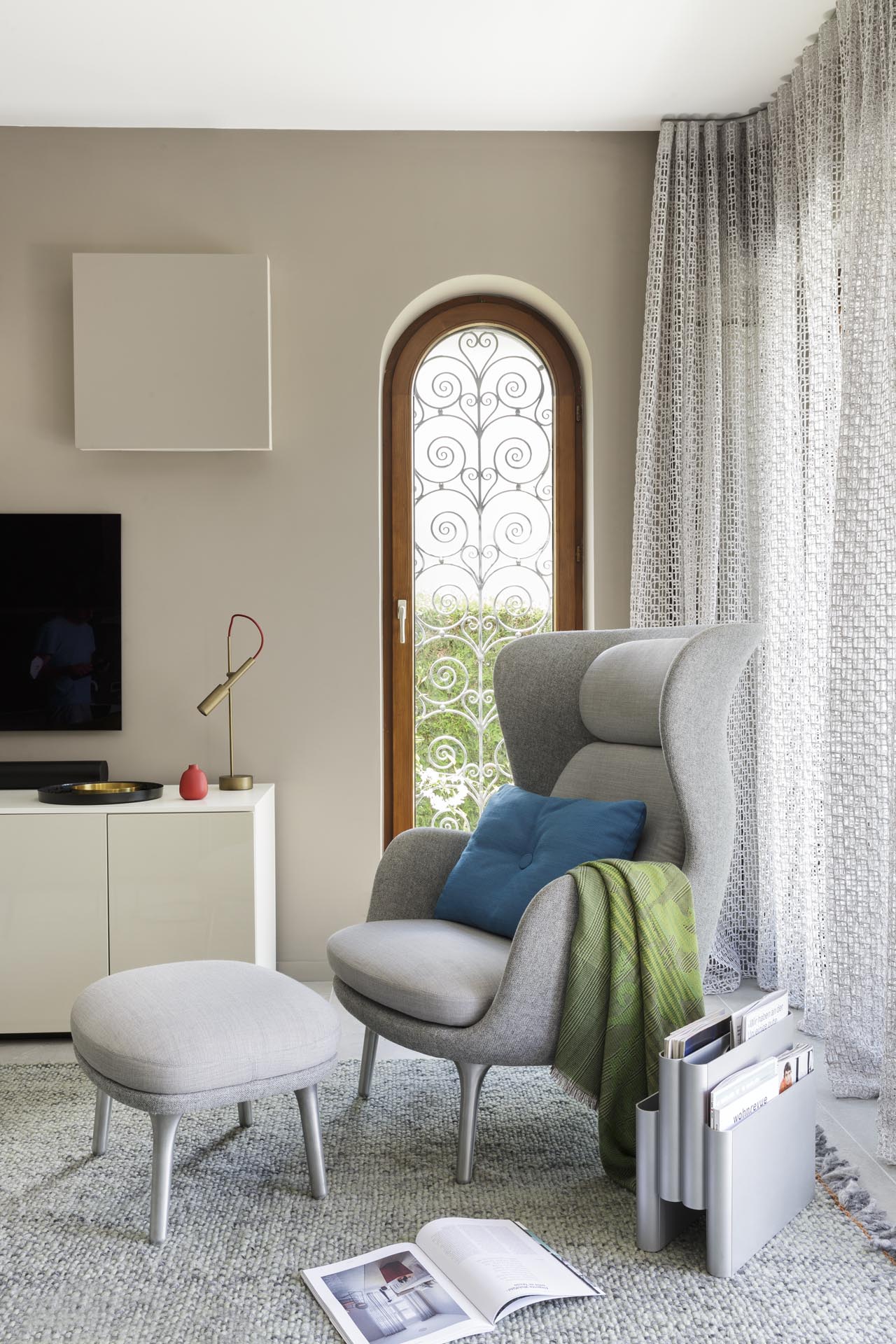 One of the first decisions made was to move the formerly separate kitchen to the living room, creating an open and warm environment where the idea of having an island with an integrated table – one of the owners’ long-time wishes – was brought to life. 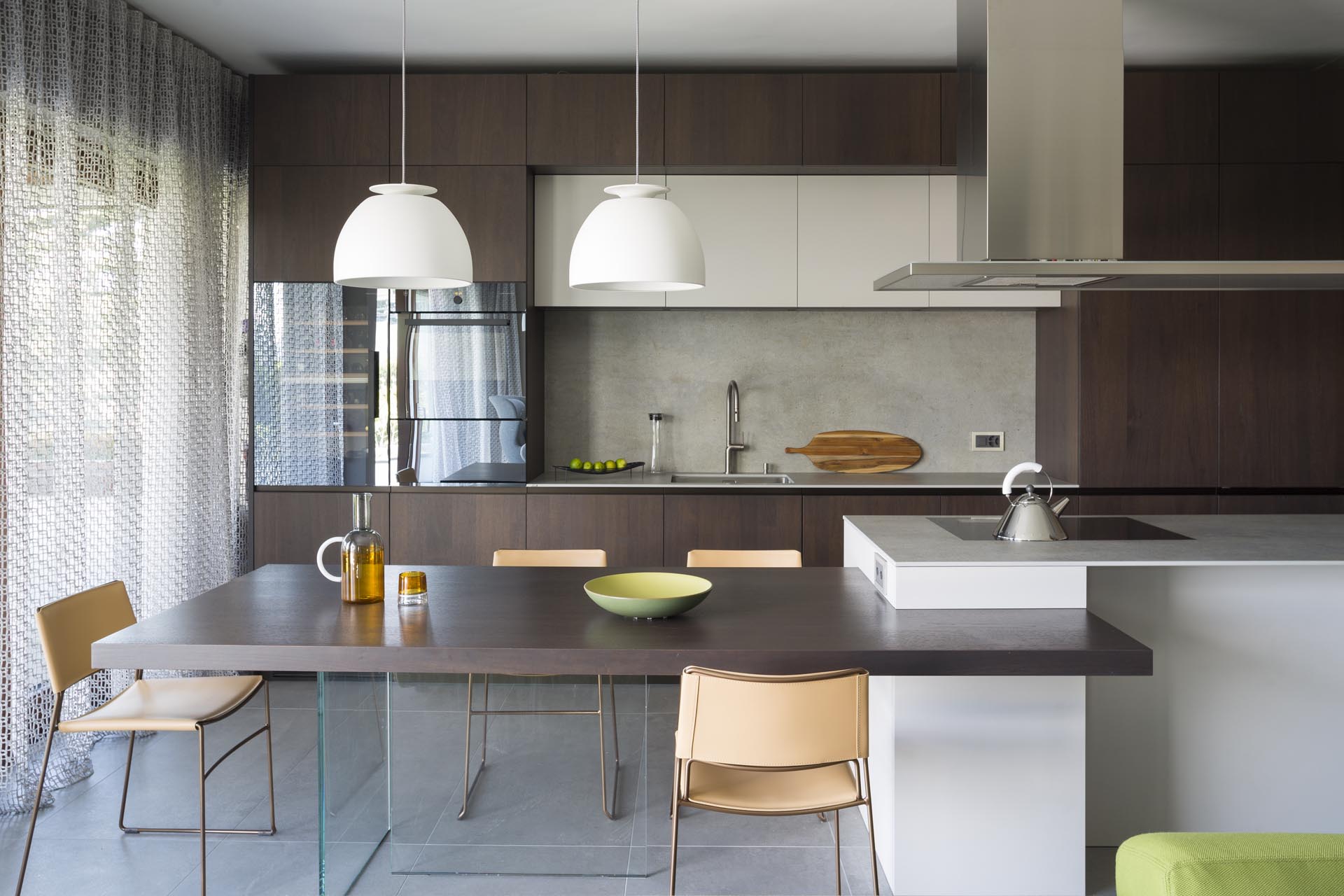 Characterised by an original arch which was preserved, the entrance is illuminated by structural ceiling lamps by Vibia and invites visitors to step inside the living room, which is enveloped by the warm and soft Charleston Gray paint by Farrow & Ball on the walls – the perfect backdrop for the asymmetrical, bold green Polder sofa by Vitra. “This tone acts as a connecting neutral yet cosy shade, which works nicely with the ’50s doors we maintained throughout the home,” says Duborkina. “My goal is to create spaces for modern living that are often based on a classical perspective. Combining contemporary and traditional influences by using modern innovations with vintage elements allows me to create inviting, comfortable and timeless spaces.” 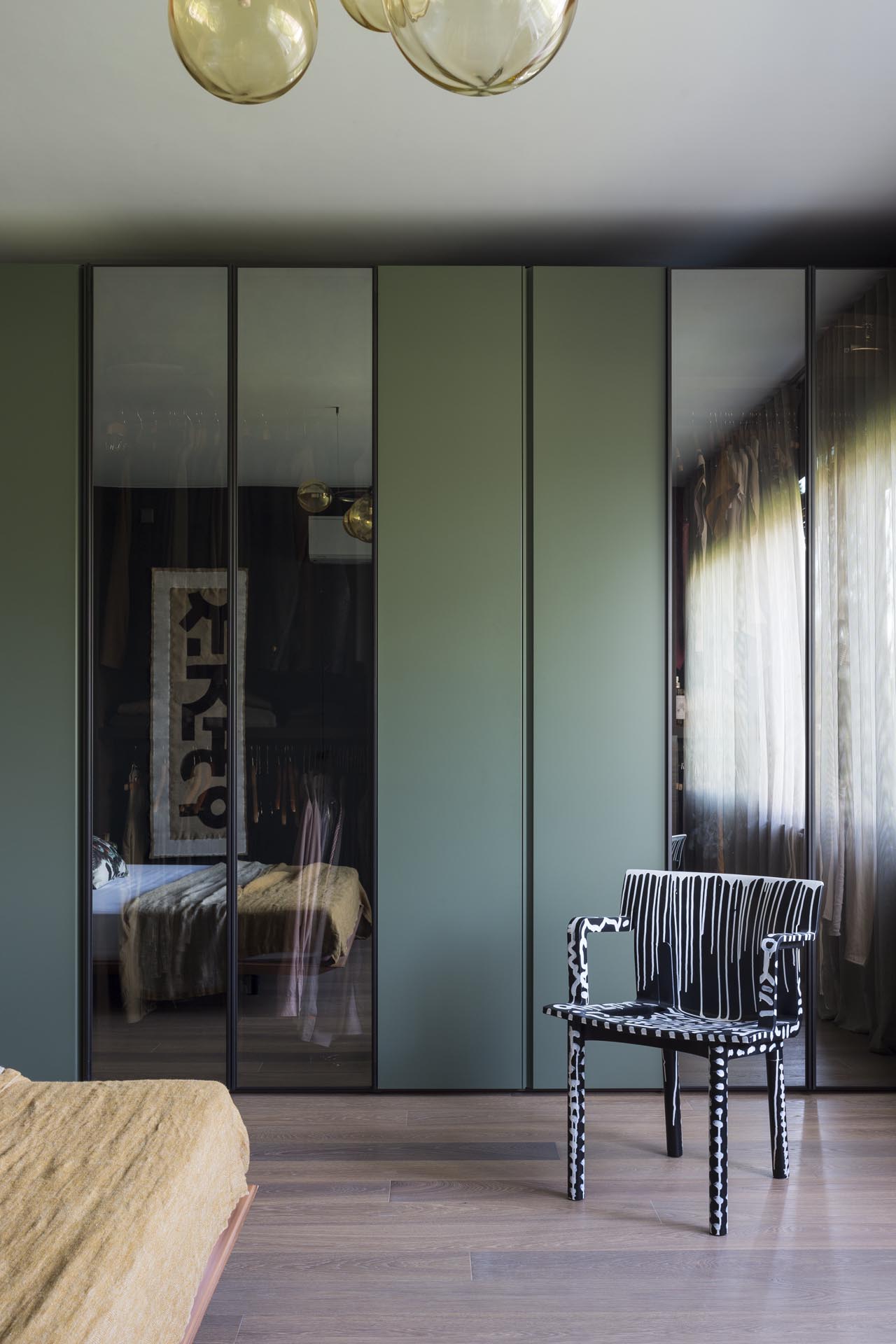 In the living area, an arched window echoes the entrance. Next to it, the Ro reading chair by Fritz Hansen, which takes its name from the Danish word meaning tranquillity, provides an invitation to relax. On the opposite side, the white Random bookcase by MDF Italia showcases travel and cookbooks, among other items. 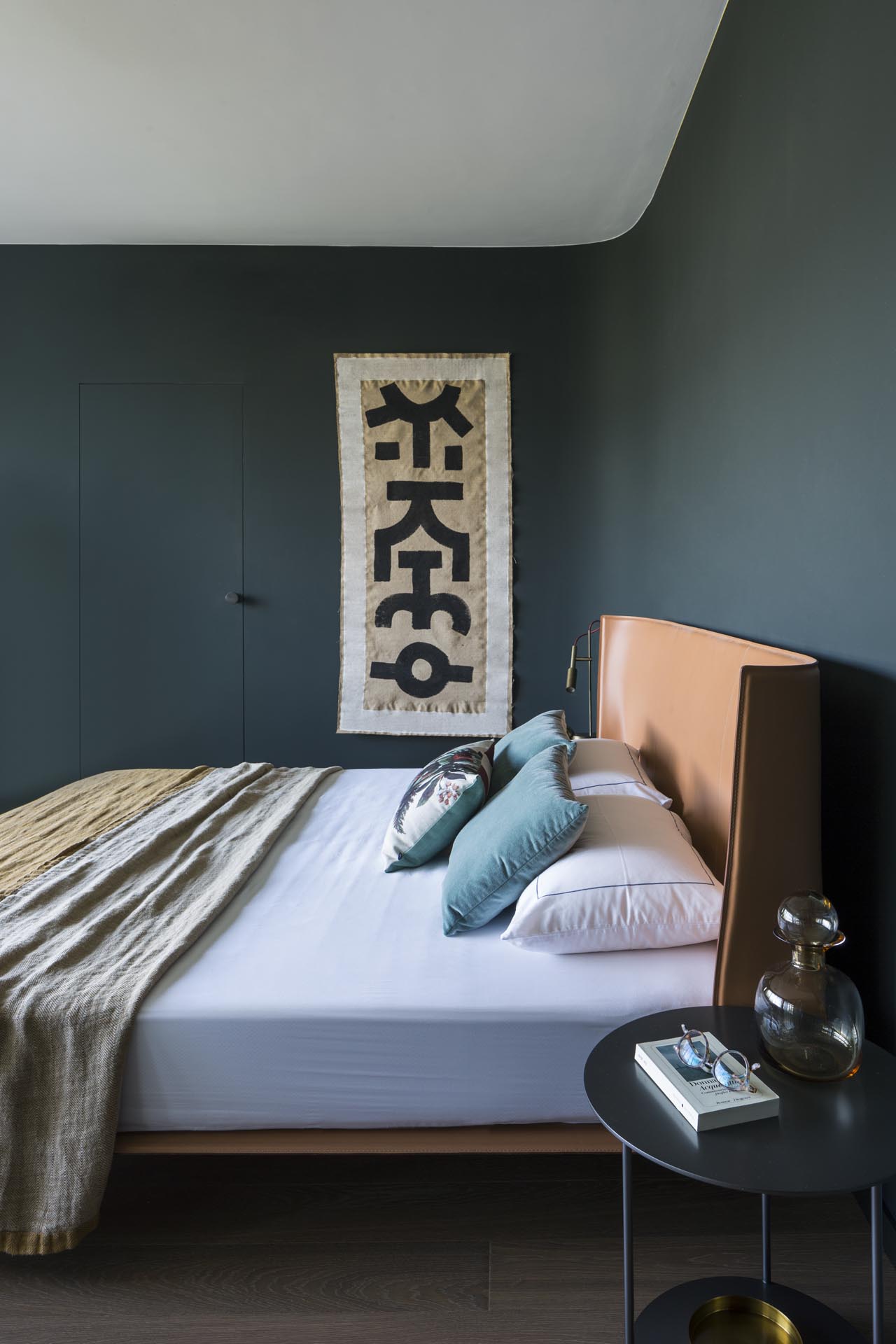 “We were inspired by the past of the clients (with the furniture they already had), the architecture of the house and the surrounding scenery, including the flow of the natural light,” describes Duborkina. 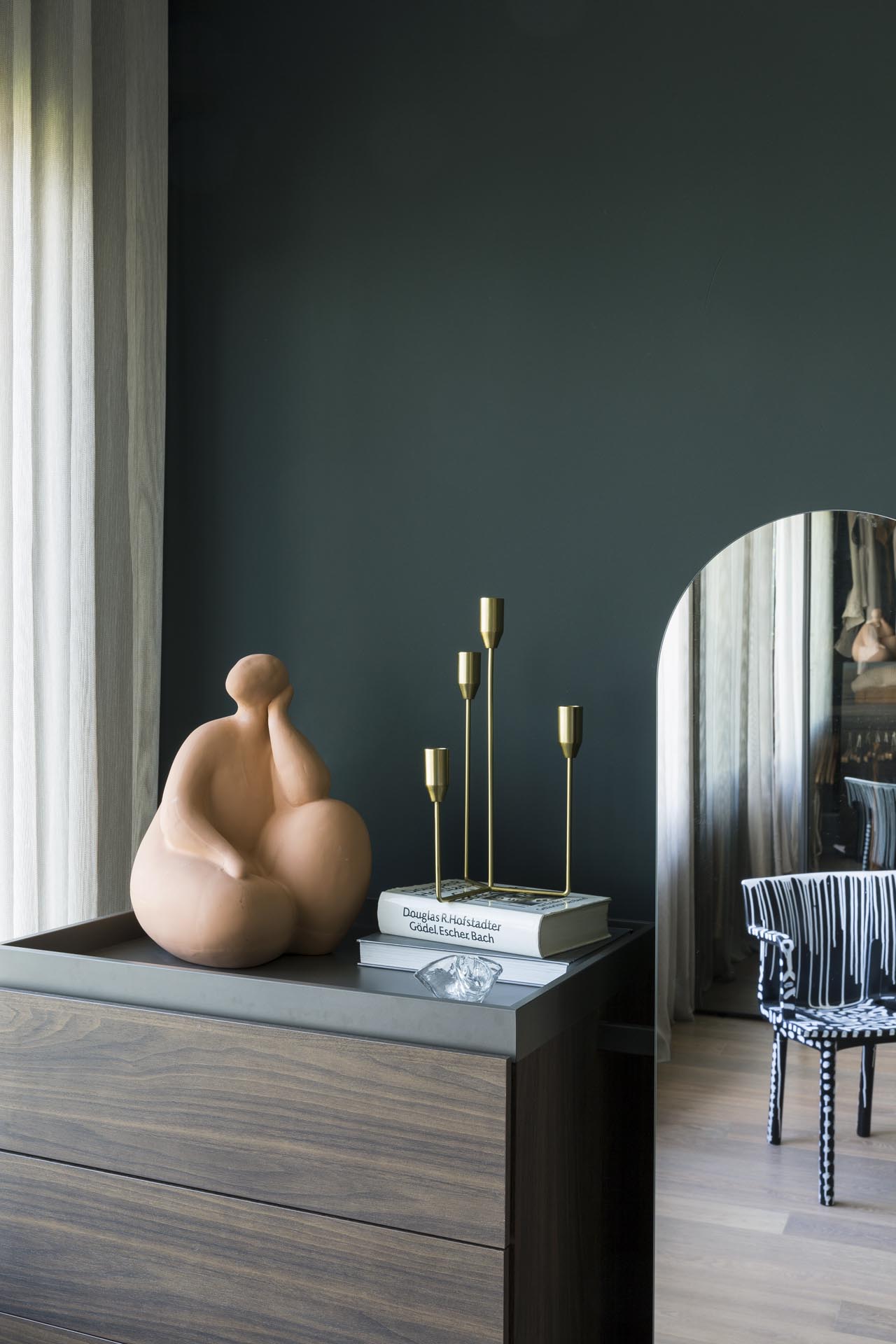 To add mood, the main bedroom was painted in Studio Green by Farrow & Ball, blending with the trees seen through the large window that invites natural light inside, while an invisible door leads to an office. The brushed parquet, as well as the Perry wardrobe by Novamobili, Puppet Ring chandelier by Vetreria Vistosi in amber glass, and caramel Alys bed by B&B Italia in leather with rounded headboard that fits the curved wall behind it, are some of the elements that shape the pleasant atmosphere. Two artworks by Raul 33 (from Artrust) – the ‘Atlantic’ piece on the wall and the hand-painted Kartell chair – add surprising visual touches to the mix. 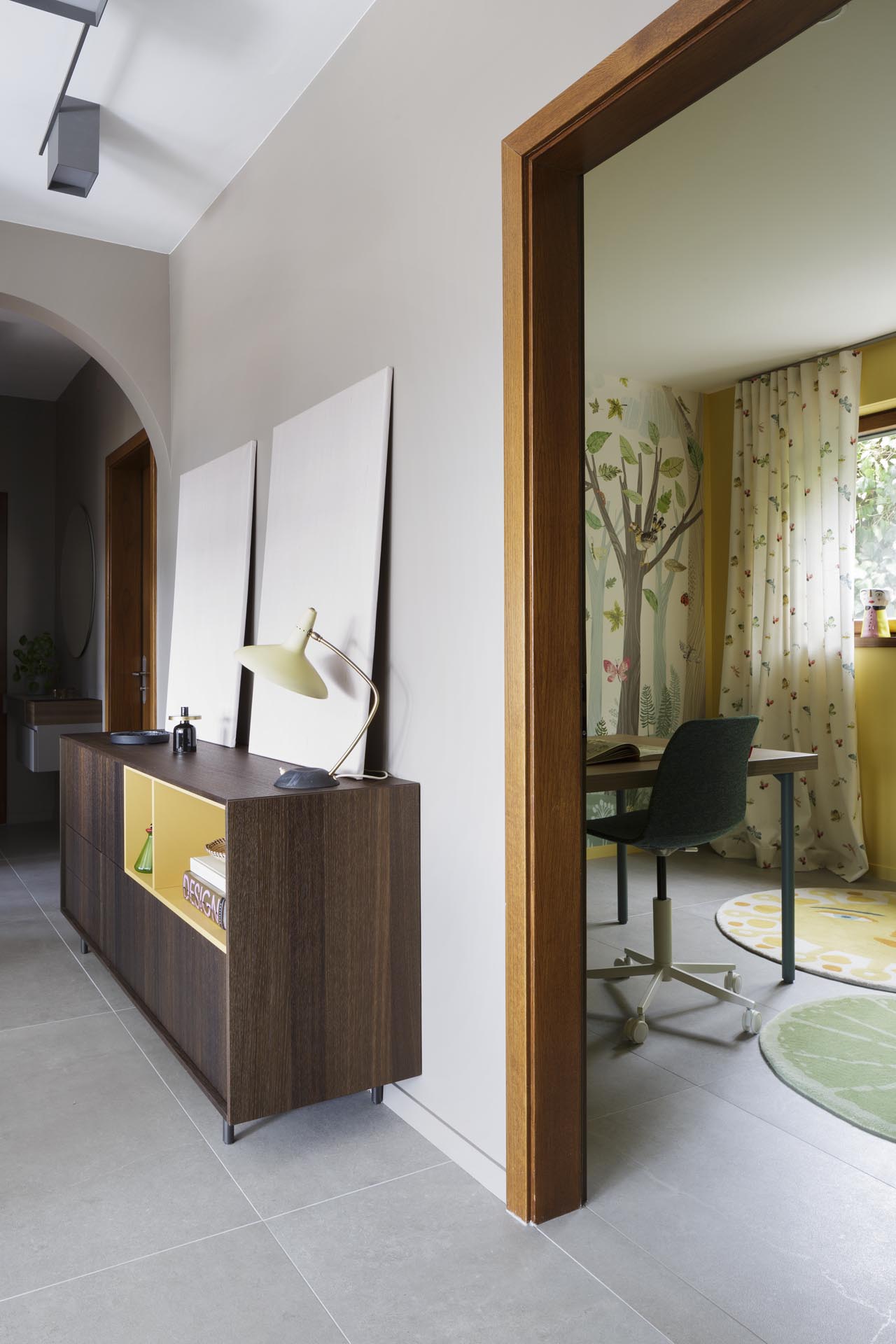 “Since the beginning, my clients were open to colour,” Duborkina notes. “We used bright shades for the kids’ spaces – such as lemon in the playroom [that’s] adorned with colourful rugs, and Dix Blue by Farrow & Ball in the sleeping room, as it is a versatile hue for the boy and the girl. 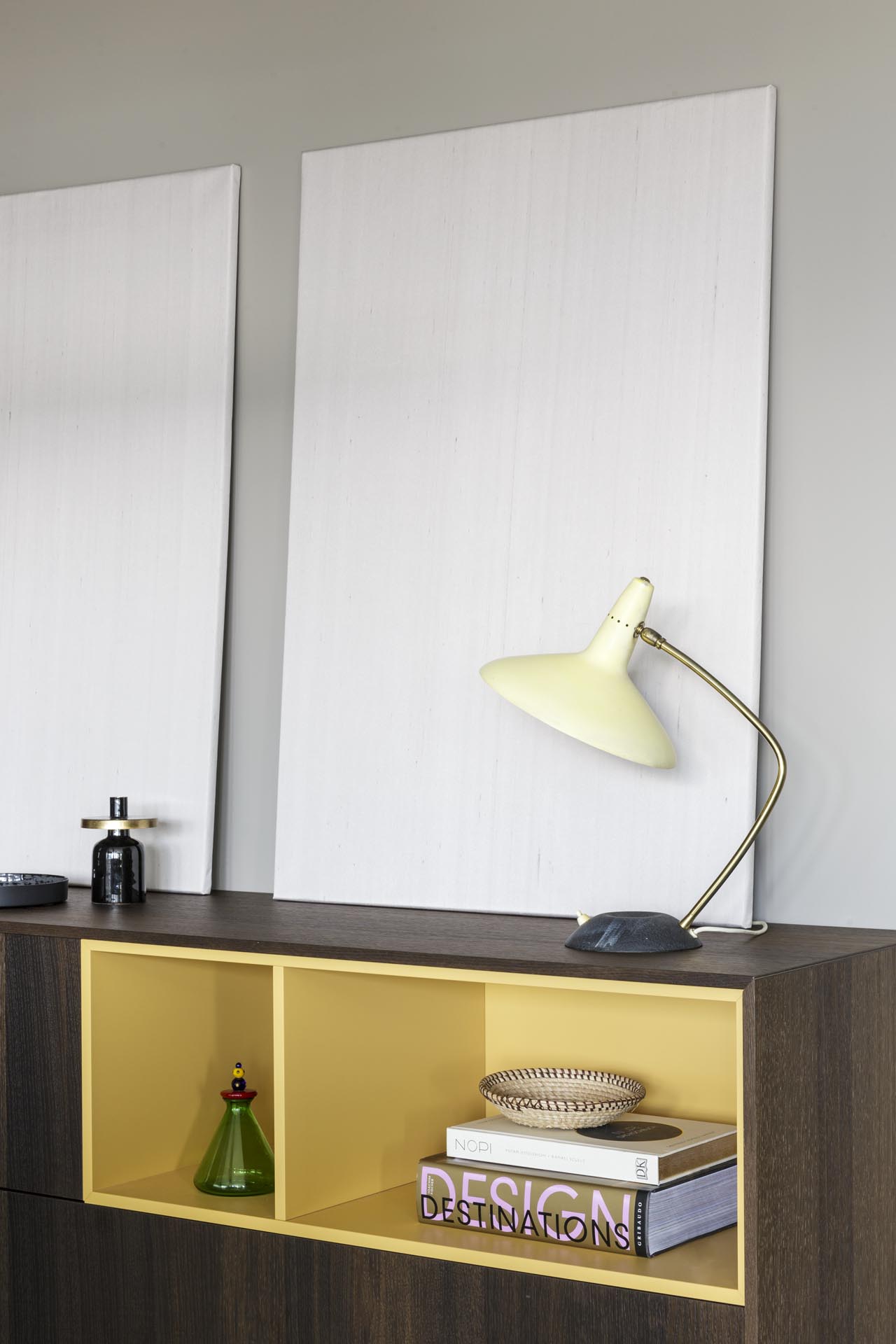 “This home is simple, functional, welcoming and playful – what Swedish people call ‘lagom’,” the designer adds. “I transmit my love for colour and pattern into all my projects, considering each one of them as a blank canvas awaiting the perfect palette and combination of materials and fabrics.” Mission accomplished.