The Brutalist Sharjah building returns the structure to its original design 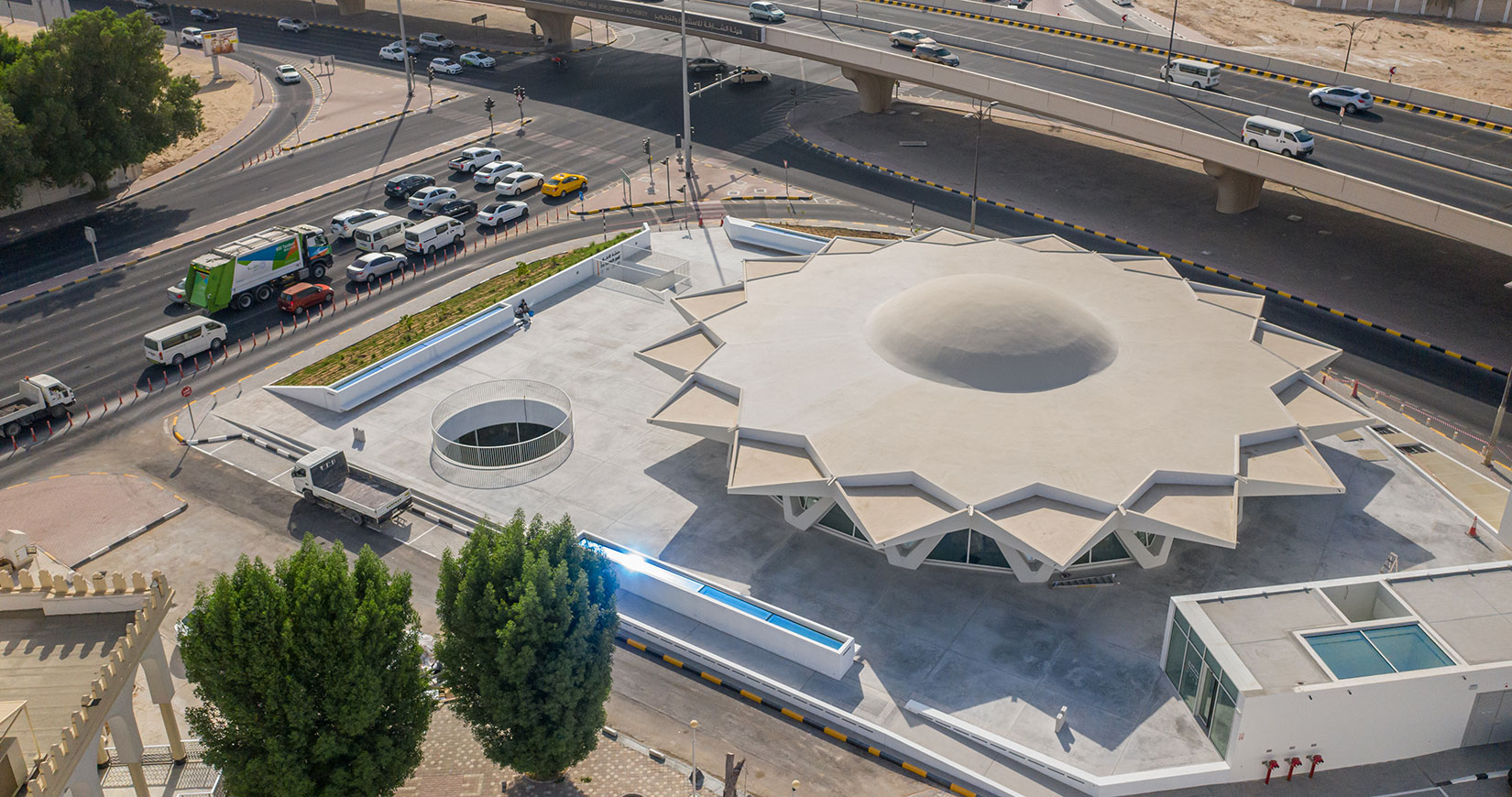 Few buildings in the Emirates have lived as many lives as Sharjah’s Flying Saucer – a futuristic structure with a mysterious history to match. While information of its origins and owner remains unknown – only speculations exist – the building has played a vital role within the city’s urban fabric.

Sitting at the intersection of multiple residential areas near the city centre – such as Dasman, Ghubaiba, Yarmouk and Ramla – and overlooking what was previously known as the ‘Flying Saucer Roundabout’, the building was most likely built between 1974 and 1976, based on aerial archives; facing one of the entrances to the British Camp which maintained its presence in Sharjah from 1942 to 1971. “In reality, the last British Army official left the Sharjah Camp in 1976,” affirms Mona El Mousfy, founder of SpaceContinuum Design Studio, the architecture firm behind the restoration of the Flying Saucer, who adds that occupation around the building was sparse, creating a structure that was isolated from its surroundings. 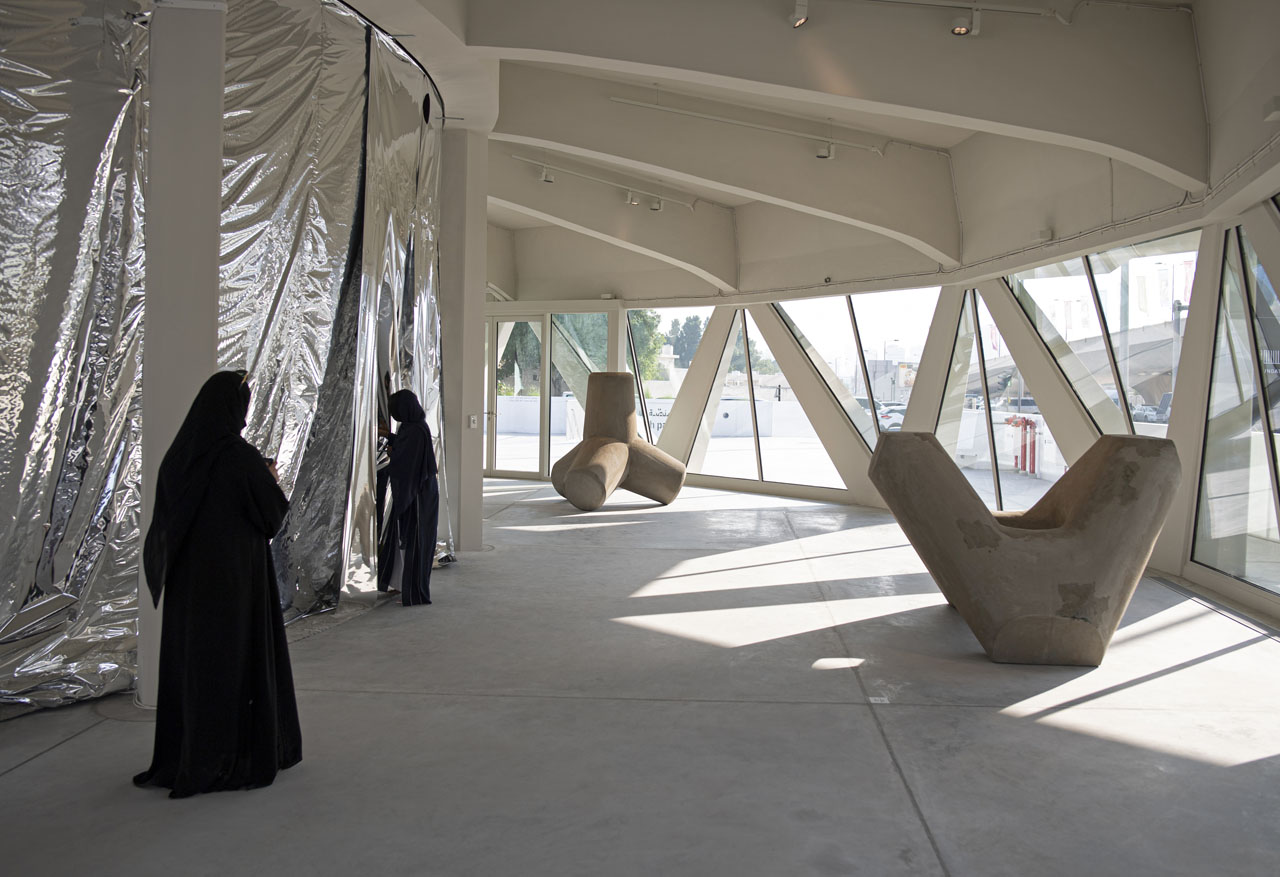 “The beloved Flying Saucer expresses the optimism and forward-looking vision of the UAE genesis years,” El Mousfy recounts. “Sharjans appear to have been engaged in all phases of its occupation from 1978, when it was an isolated building on a roundabout, to its present. The building’s history and its transformations have multiple references to the growth of Sharjah and of the multiple residential neighbourhoods that surround it.”

As it stands, the Flying Saucer’s futuristic design is indicative of the city’s growing modernity at the time, which saw the erection of a number of modern buildings around the area – although none with as striking a structure as the Flying Saucer’s. “Prior to its opening in December 1978, an advertisement in Al Khaleej newspaper set the tone for the project’s futuristic ambition, implicitly acknowledging the space-age influences of western ’60s and ’70s pop-culture that are evident in its design,” El Mousfy explains. “The article announces, along with a futuristic abstract drawing, that ‘The Flying Saucer will be soon landing in Sharjah’, followed by a second article that reads ‘The Flying Saucer will be landing in Sharjah Tomorrow’, (Al Khaleej 1978). A more detailed advertisement in Gulf News on 18 December 1978 read ‘Space Age Shopping comes to Sharjah’. 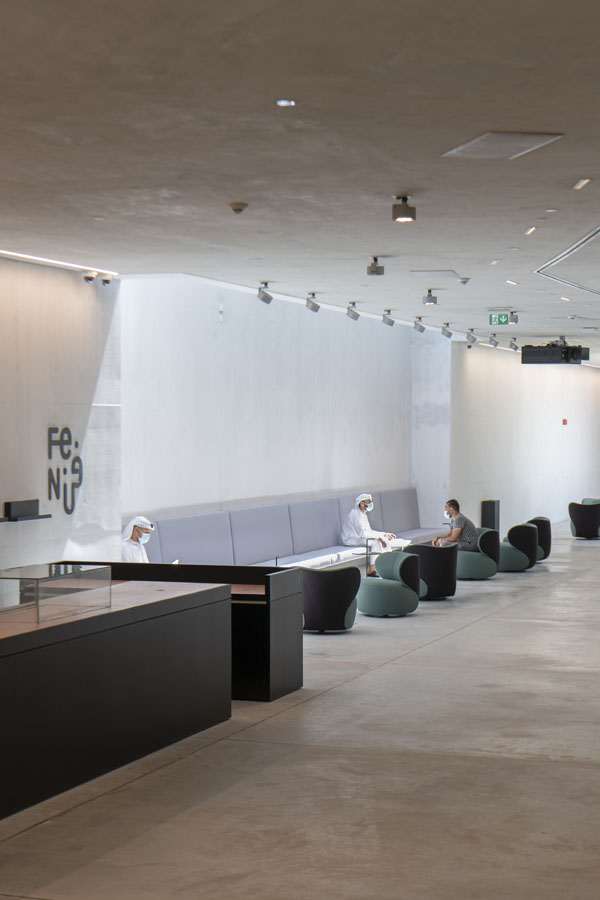 “Undoubtedly the Flying Saucer was an alien object to Sharjah and the area it landed on, yet Sharjah at this period was beginning to embrace modernity –  as evidenced by the 1970s modern buildings along Al Aruba Street, Sharjah Corniche Street and in the newly developed neighbourhoods located around the Saucer and few kilometres inland from the city centre,” she adds. 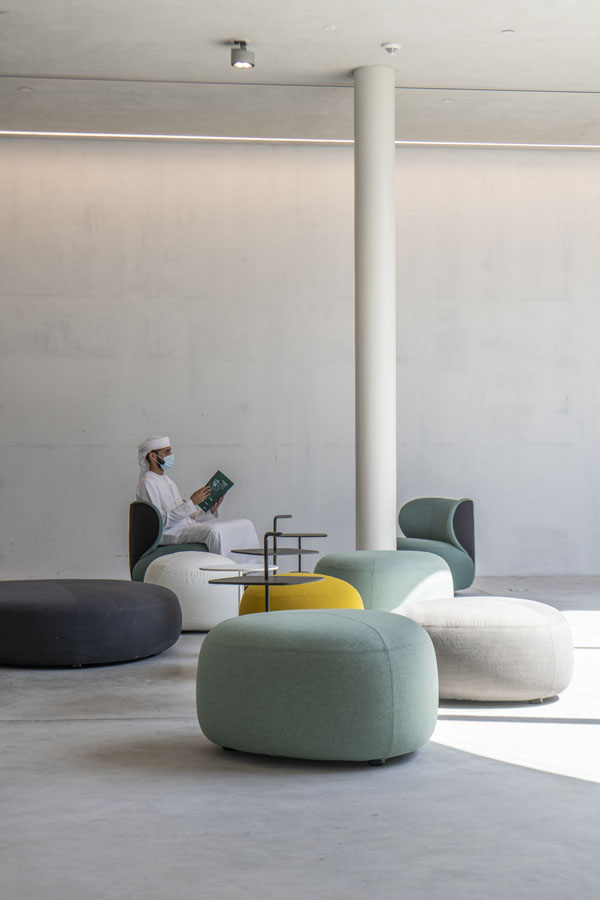 Initially conceived as a French-inspired store that combined a restaurant, newsstand, tobacconist, gift shop, patisserie and delicatessen, the building was later taken over by a local supermarket chain. The Sharjah Art Foundation (SAF) first acquired the building in 2012, replacing a fast food chain that had modified its architecture through the incorporation of an annex, interior partitions and a false ceiling that hid its concrete dome and ceiling structure from the inside. The peripheral structural pillars had also been cladded with silver aluminium panels.

Three years after acquiring the building, Sharjah Art Foundation began the process of returning the Flying Saucer to its original form in preparation for the 2015 exhibition ‘1980 – Today: Exhibitions in the United Arab Emirates’, curated by SAF’s president and director Hoor Al Qasimi for the National Pavilion UAE La Biennale di Venezia at the 56th International Art Exhibition that year. For this temporary renovation, the building was stripped of its exterior cladding and interior elements, including the false ceiling and partitions, fully revealing its over seven-metre-high dome and impressive structure. 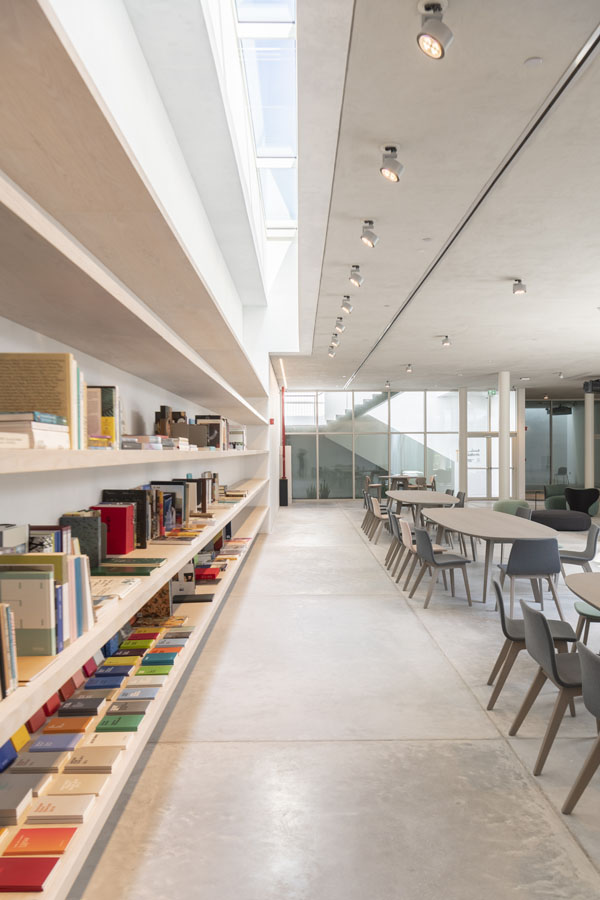 “SAF began restoring the building in 2015, working with SpaceContinuum Design Studio to reverse the transformations undertaken during The Flying Saucer’s occupation by Al Taza restaurant that led to the erasure of the building’s Brutalist character. In this first phase of renovation the structure was stripped back to its core form by removing the grey aluminium cladding on its pillars and the orange aluminium cladding on its canopy, and taking down all false ceilings and interior partitions,” El Mousfy comments.

The most recent intervention restored the building to its original silhouette, enhancing the open character of the interior gallery space. Notable elements of its design include a wide circular dome floating above a ring of eight columns, a star-shaped canopy projecting beyond a fully glazed panoramic façade, and light and open interior space supported by angled V-shaped pillars. 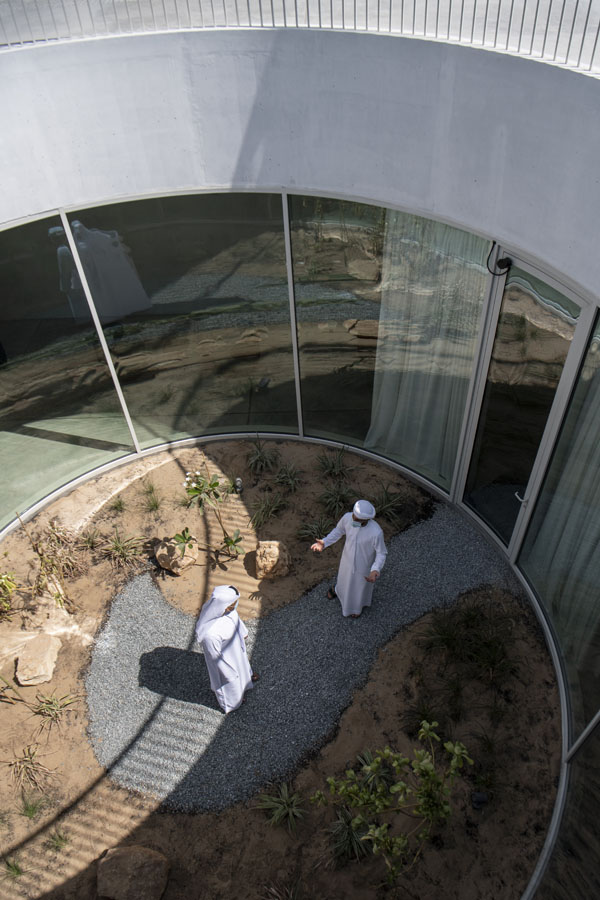 “The core aim of the present restoration was to bring the Flying Saucer back to its original silhouette by removing its incongruous connected annex and reinstating its openness and perceptual lightness. This deletion fully reveals the glazed façade that immerses the space with daylight and allows for a 360-degree panoramic view of the surroundings. It also restores on the interior and exterior the radial symmetrical shape of the building, helping visitors to further appreciate its quite magnificent ceiling and façade structures, and towards the centre, its 7.3-metre-high dome that was kept in its existing condition- a rough exposed concrete finish.

“The main aim of this cycle of adaptive reuse was to fulfil the desire of the Sharjah Art Foundation to further inscribe the Flying Saucer into the daily life of Sharjans while contributing to its rich socio-cultural history,” El Mousfy says.

“This present intervention has a two-fold strategy; firstly the restoration of the Flying Saucer to its original character, and secondly the addition of a new outdoor public space and a lower-level community space that aims to foster gathering, learning and creativity.”

The outdoor urban space, dubbed the Platform, is an open public space designed to act as a spatial and programmatic extension of the Flying Saucer, and set to host social events, performances and outdoor art installations.

“One important urban addition of the present intervention aims to enhance the approach to The Flying Saucer and invite pedestrians and visitors at large to engage with the venue’s outdoor spaces. The Platform, which is anchored on the site around the Saucer, has replaced the old parking space. It acts both as a threshold surrounding the building on three sides and as spatial and programmatic extension of the Saucer, to be used as a public gathering place and to stage outdoor exhibitions and events,” El Mousfy explains.

Due to the building’s intersectional location, pedestrian access to the building is easier from some areas more than others, although El Mousfy adds that Sharjah Art Foundation intends to work with the Sharjah Roads and Transport Authority to attempt to achieve more pedestrian-friendly conditions.

The additional underground location, the Launch Pad, creates a community space that houses a sunken circular courtyard called the Green Crater, featuring lush vegetation and natural light; there is also a convivial, multi-activity café overlooking the Green Crater, a curated library, as well as areas to host events such as film screenings and workshops. “The Launch Pad is intended as a community space that fulfils a cultural and social function. In contrast with the Saucer’s radial symmetrical shape, the Launch Pad has a fluid character and is enclosed all around by white-stained fair-faced concrete walls giving it a rough textural expression. The space geometrically mirrors the Platform above; it fans around the Saucer’s faceted retaining walls and extends to the periphery of the site,” El Mousy says.

“The horizontally extended yet vertically compressed underground space has limited outside vistas – in contrast to the Saucer space that allows for 360-degree panoramic views of its surroundings. Also, in contrast to the Flying Saucer, which is fully immersed with daylight, the Launch Pad receives daylight from different types of light source: the lush circular sunken courtyard, the glass encased stair and the three linear peripheral skylights that bring zenithal lighting to the open space.” 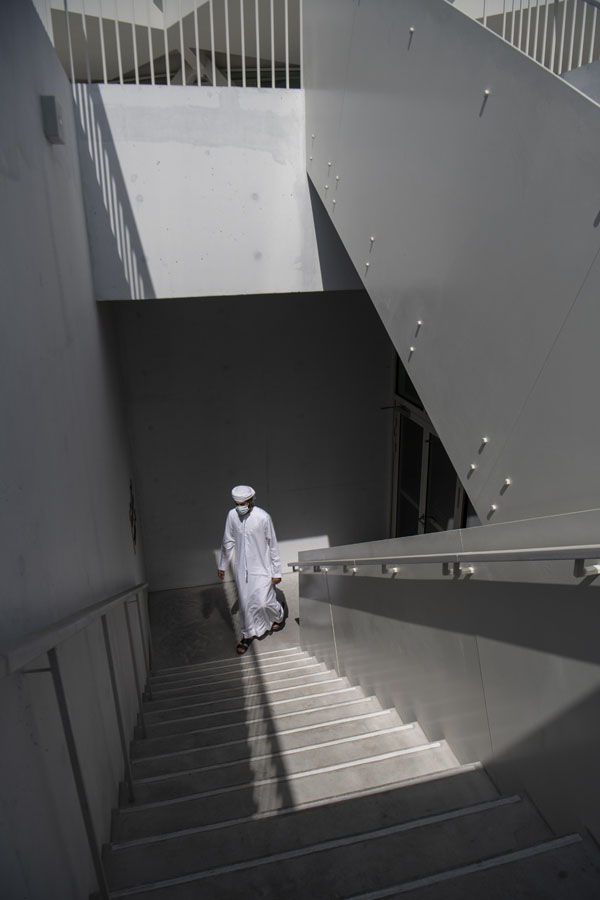 The ongoing renovations of the Flying Saucer as well as other modern buildings across Sharjah sheds light on Sharjah Art Foundation and SpaceContinuum’s stark interest in preservation and adaptive reuse, placing Sharjah at the forefront of such initiates across the Emirates.

“Sharjah Art Foundation’s President and Director Hoor Al Qassimi has a long-term interest in revisiting and adapting selected modern structures of the ‘70s and ‘80s to new uses. Their preservation aims to highlight their architectural and urban qualities, and reveal their rich history with multiple references to the UAE’s own history,” El Mousfy explains.

“Myself and the two architect colleagues from the Sharjah Art Foundation who have also worked on this project, Mona El Chaar and Hinjal Kumar, fully share this interest in engaging with existing structures in the city. Not only is this approach environmentally sustainable, but it also creates a layered architecture that is in continuous dialogue, while building upon the city’s history and memories, and responding to contemporary uses and evolving aspirations. I believe that thoughtful adaptive reuse of culturally valuable buildings supports the re-evaluation and transformation of architecture.”