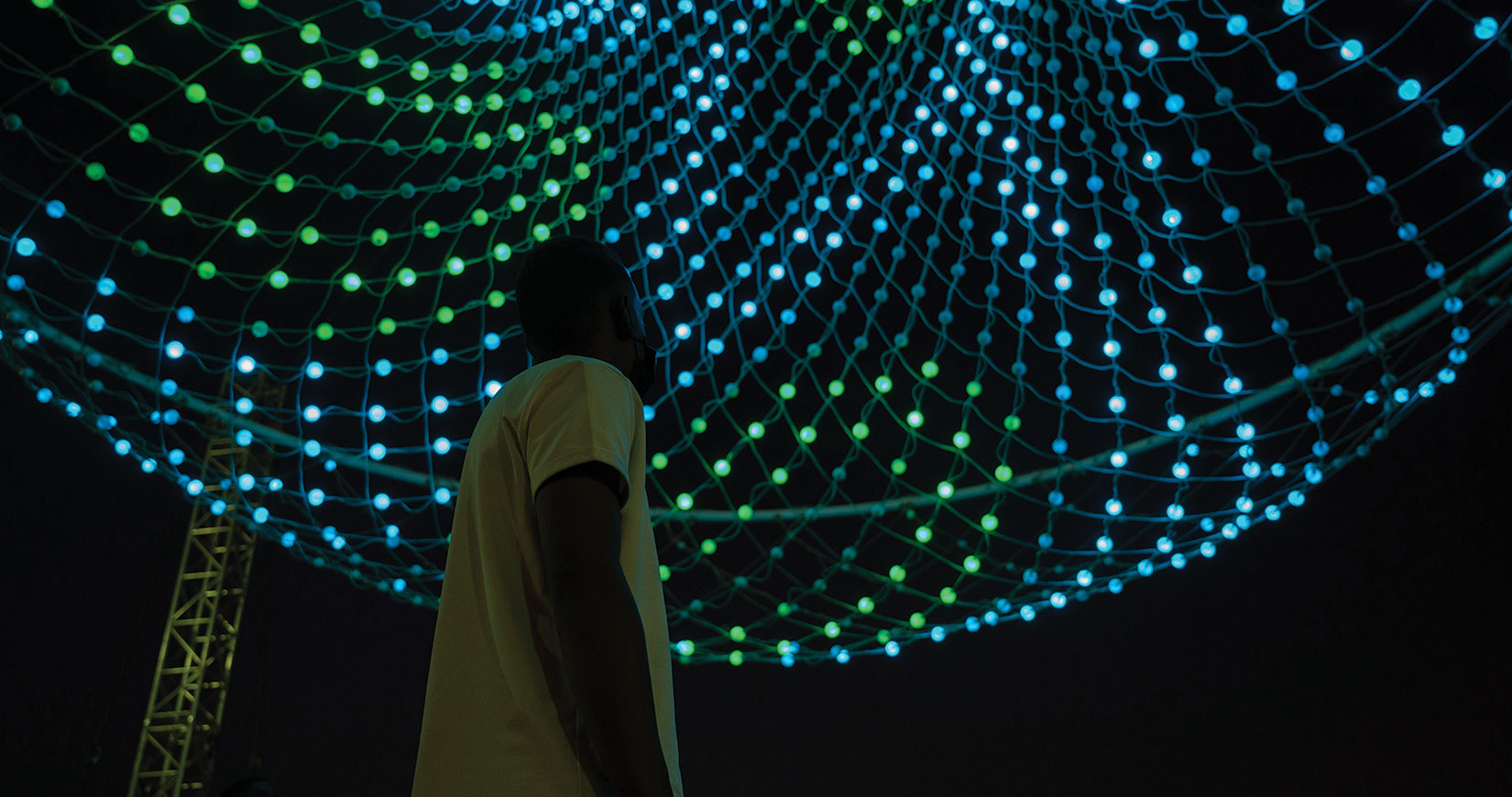 Presented by Riyadh Art and Royal Commission for Riyadh City, Noor Riyadh – the inaugural edition of the annual festival of art and light – presented some 60 artworks, including large-scale public installations and an exhibition entitled Light Upon Light: Light Art since the 1960s, with the overarching theme of ‘Under One Sky’

The sun is not the only source of light illuminating Riyadh’s sky. In the Saudi capital, Noor Riyadh punctuates the ever-sprawling metropolis. The pilot festival is just one of four major projects under the mandate of the Royal Commission for Riyadh City to transform the capital into one of the world’s most liveable, vibrant and sustainable global cities. “Our development plans respect our history and heritage but also look forward to embracing new ideas. It’s the largest investment in public art ever seen,” says architect Khalid Al-Hazzani, Director of Riyadh Art Project.

With this perspective in mind, it’s no wonder that sites like the Al-Turaif historical district – the birthplace of the Kingdom and a UNESCO World Heritage Site – and King Abdulaziz Historical Centre were activated with electrifying large-scale light and music installations that blended seamlessly with the surviving architecture of bygone eras. Atop the National Museum of Saudi Arabia, established in 1999 and designed by Moriyama & Teshima Architects, sits artist Marwah AlMugait’s May We Meet Again (2021), an intimate portrait of people who inhabit this space – mostly migrant workers who frequent the nearby park. The multilingual audio-visual compilation is projected against cascading water in captivating poeticism. Competing for attention is The Cupola (2003) by artists Ilya & Emilia Kabakov. Integrating sculpture, music and colour, the mammoth installation takes inspiration from the cupola of Paris’ Grand-Palais, standing in ceremonial regality in the heart of Riyadh.

In another part of town, specifically the massive unfurling grounds of the King Abdullah Financial District, artist Daniel Buren has wrapped the ceiling of the Conference Centre with Coloured Triangles by Myriad, for Riyadh (2020-21) and Daniel Canogar jolts the city with electric-like bolts of light zigzagging up and down the Zebra Building. Equally playful with lightning is Saudi artist Ahmed Mater’s Mitochondria: Powerhouses (2021), a collaboration with Madrid-based Factum Arte. A high-voltage Tesla coil sits in a cordoned-off sandpit where flashes of lightning hit the ground in a metaphorical gesture to unearth the forces shaping radical social and urban transformations that define the country.

While dispersed in the urban expanse of the city, the meandering festival is anchored in the landmark retrospective Light Upon Light: Light Art since the 1960s, co-curated by Raneem Farsi and Susan Davidson. “This exhibition gives a historical context to everything you’ll see around Riyadh during the festival. It lays the foundation to the understanding of the Light Art movement and the artists who started it in the ‘60s,” explains Farsi. Taking place at the especially reconstructed King Abdullah Financial District Conference Centre – designed by Skidmore, Owings & Merrill – some works outshine others. In an ode to the sun, Mohammed Al Faraj’s video installation The Sun, Again (2017) imagines a world in which the sun starts faltering. While the reasons are vaguely communicated, the heavy-duty gas masks and the doomsday ethos indicate a crisis of ecological proportions. In the context of today, perhaps it’s a fable for the accelerationism that blocked the sun. “I’m interested in green architecture and I look at today’s cities with some measure of criticism. It does not take into account natural light as much – I don’t like describing our sun as brutal, it’s generous!” says Al Faraj.

Likewise incorporating architectural elements is Ahmad Angawi, who brings to the fore traditional elements of Hejazi design. In Proportion of Light (2021), he uses 30 sheets of glass on which the pattern developments of the mangour, traditional screens made of wood and prevalent in old Jeddah façades, are engraved. Sitting atop programmed LED lights, the movement alludes to the duality of concealing and revealing as daylight spills into space in varying proportions. “These elements are innovative in how they let light and air into interior spaces. I’m fascinated by how it functions like exhaling and inhaling,” says Angawi. Meanwhile, Manal Al Dowayan lights up a poetic verse by Saudi poet Ghazi Al Gosaibi. Nostalgia Takes Us to Sea but Desire Keeps Us from the Shore (2010) expresses a tension in yearning. “I made this at a time when I was grappling with ideas of belonging – I had just left home and was happy about it but also hated the new place. At the backdrop of all of this is my experiences as a woman, of course,” she tells me. Whether light is used as a material or source of inspiration, it’s clear as broad daylight that Riyadh is having its moment in the sun.

Read more: id50 2021: Celebrating contributions to design and architecture across the Middle East