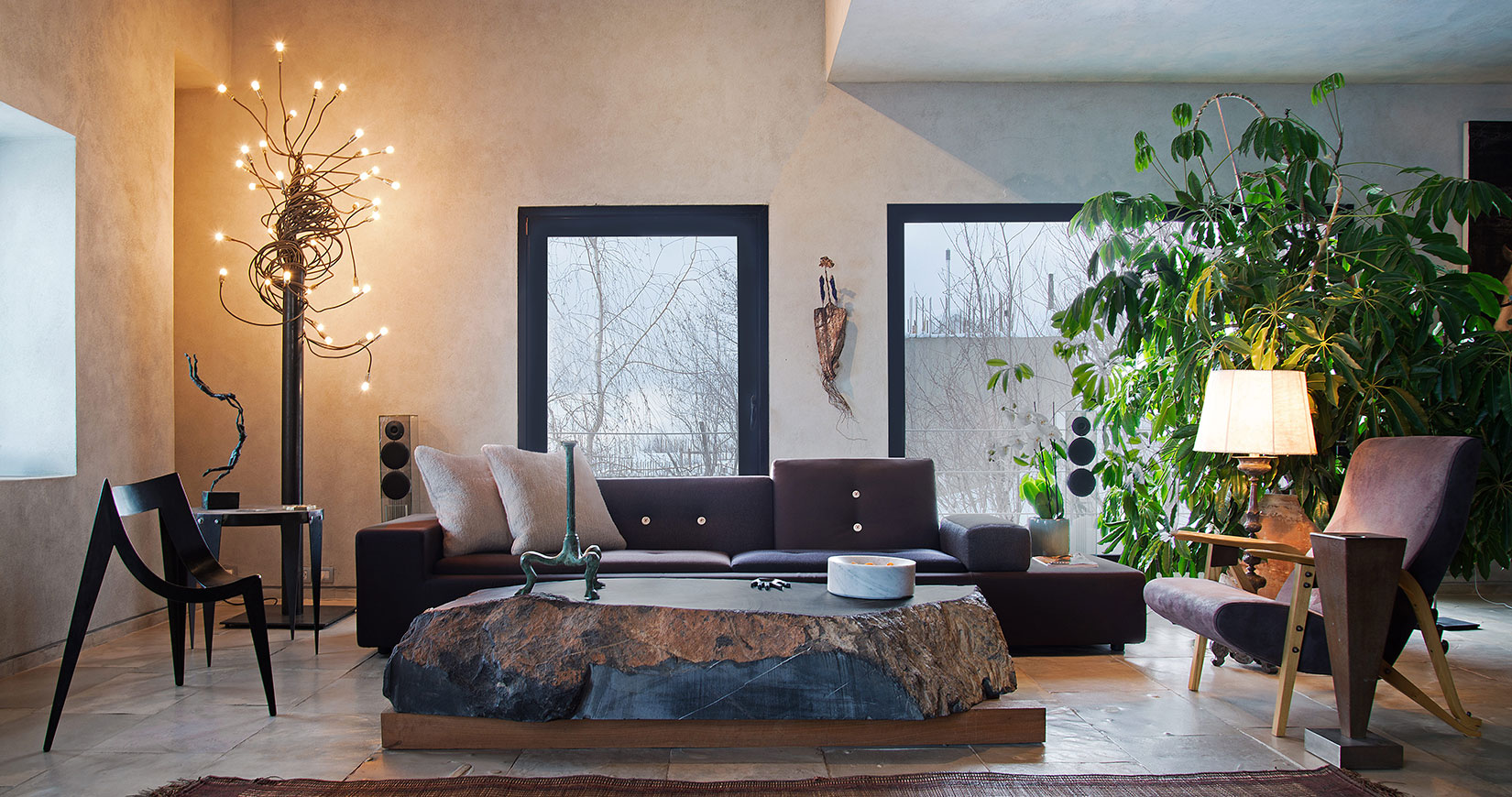 “We bought this holiday home over 20 years ago, so we have a lot of memories here,” begins Lebanese architect Nabil Dada, founder of Dada Associates and the man behind a number of notable projects across Beirut, such as the Beirut Yacht Club and Al Amin Mosque. “I watched my kids grow up in in this home. It’s a beautiful place to spend both summers and winters in, and it’s always filled with friends. It’s a mountainside home, so we wanted to create a warm, rustic feel with a modern twist,” he says. 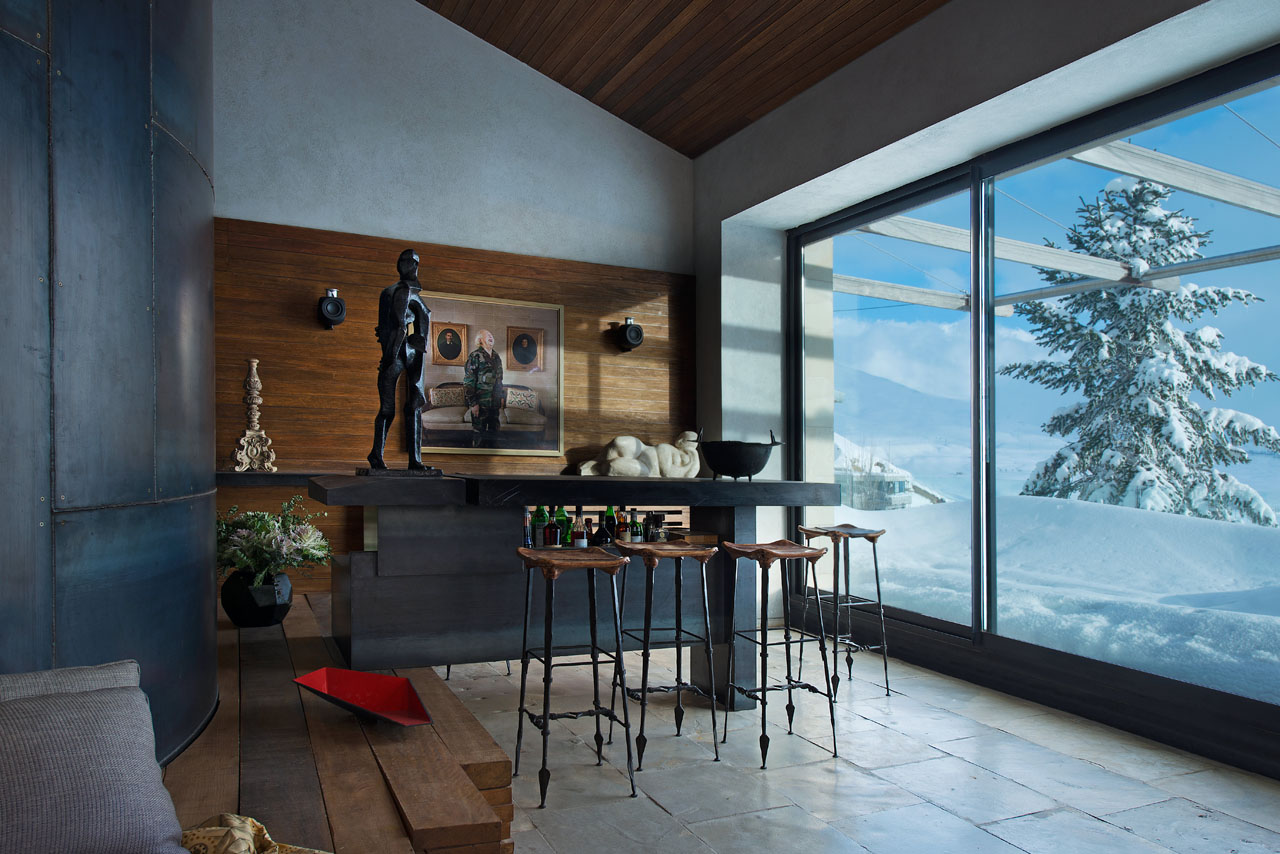 The Dada family acquired the house when it was still under construction – the core architecture was designed “by a dear friend”, Lebanese architect Assoman Tourba. The main feature of the house is its large cylindrical volume that houses the elevator and staircase of the building. The different spaces of the house were designed around this core. The living room and bar area features a double-volume slanted ceiling, which stretches into Dada’s eldest son’s bedroom on the second floor – and can even be seen in his bathroom. To further accentuate its length, the ceilings have been cladded with long wooden strips. Dada says that a major renovation has been undertaken only once since the acquisition of the house – almost a decade ago. 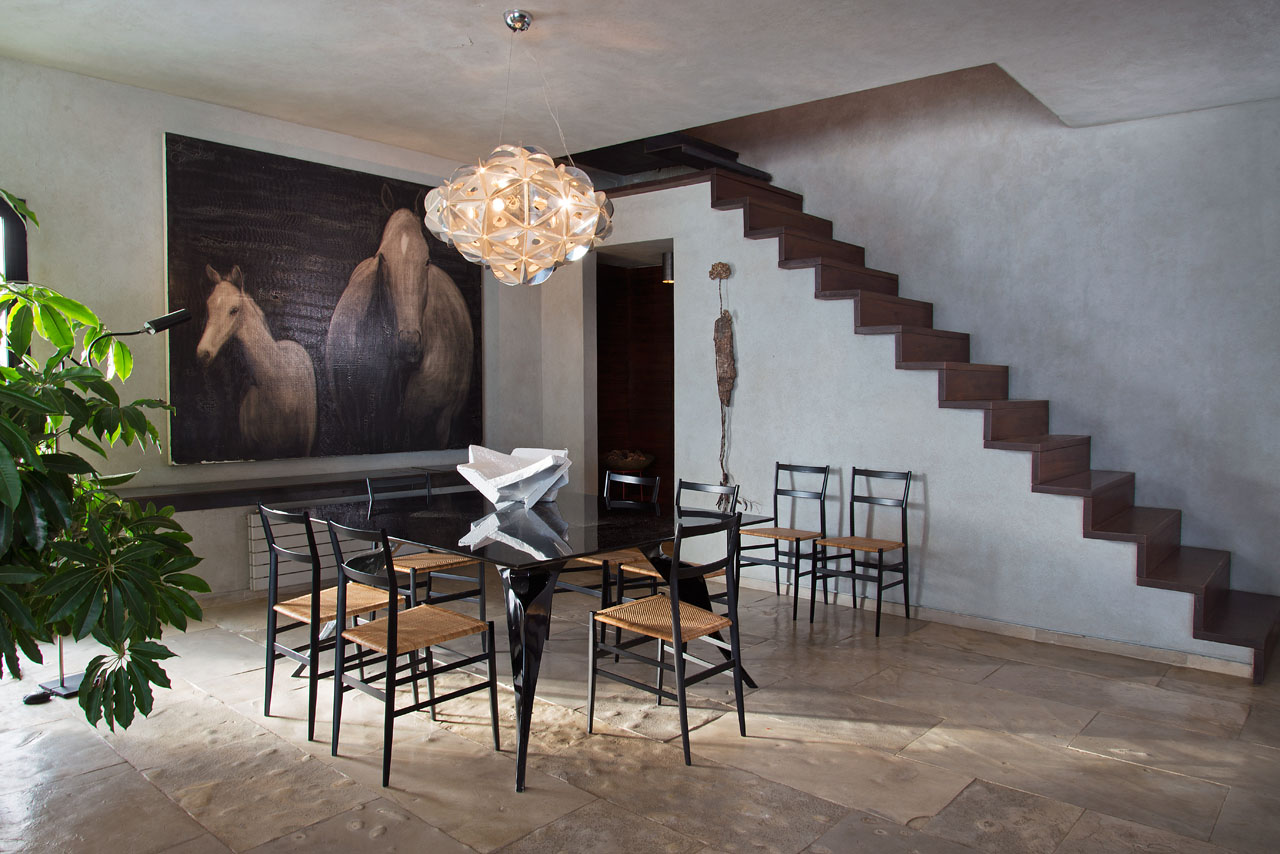 “We were going for an unpolished look, emphasising the beauty of raw and textured materials. We cladded the surface of the cylindrical core with raw metal which reflects light differently throughout the day, revealing different hues of blue. As for the rest of the surfaces, it’s all about the texture. Walls and ceilings are either cladded with sandblasted cedar wood panels or finished in a textured light grey paint. For the floors we used a local Lebanese stone called Namoura, which has a bumpy surface. The stone extends out to the terrace, creating a continuity between the indoor and outdoor spaces. We didn’t want the terrace to feel like a separate part of the house, especially since it becomes very much part of the living space in summer,” Dada explains. 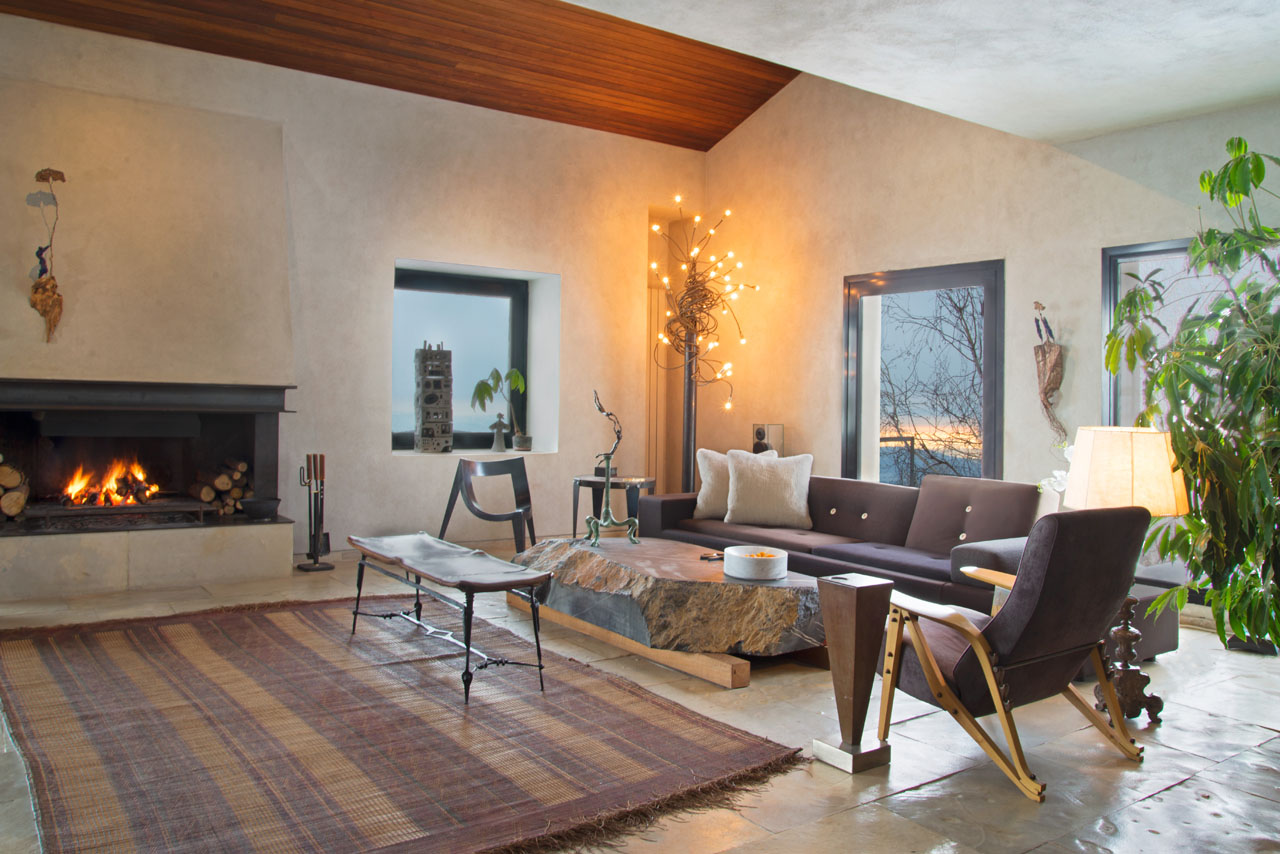 He continues: “There’s a bar, which serves both the indoor and outdoor areas, as well as two living rooms and a dining space arranged around the cylindrical core in an open plan. My three kids, my wife and I all use the spaces simultaneously with our friends but we do feel like we all have our own space. A platform made out of raw slats of wood wraps around part of the core and acts as structural support for the bar element as well as a deep bench which connects the bar to the living room.”

The bar element was designed by Dada himself alongside his eldest son, Adib; the base is created in raw metal while the top is a solid, untreated piece of marble. 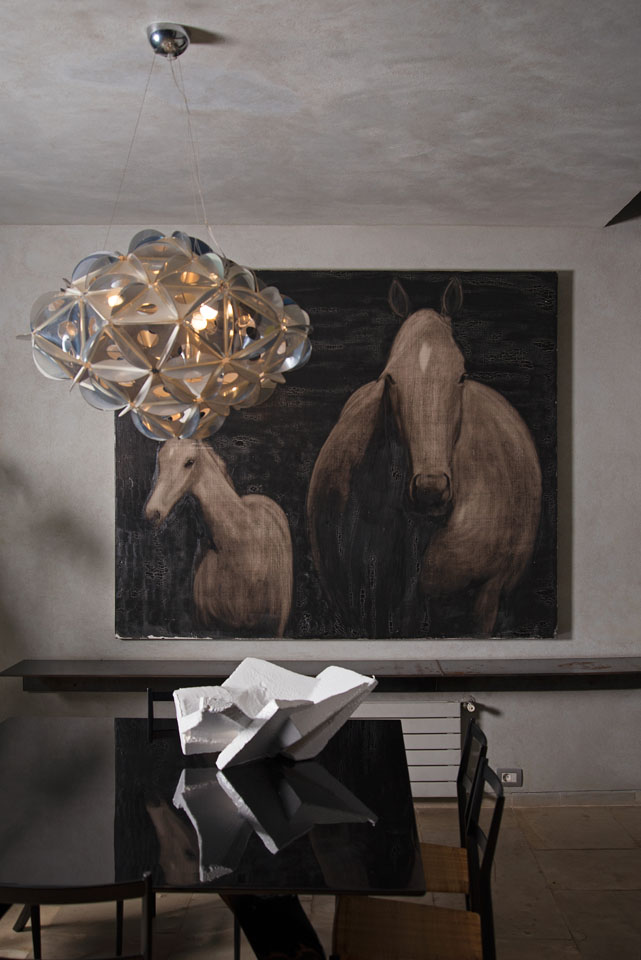 The view from the house is incredible, Dada says, and on clear days one can see Beirut and the sea from the living room. During the renovation, the windows were enlarged in order to maximise the views “but nothing beats the uninterrupted view from the terrace”, Dada says, where “often we get a mesmerising vision of the clouds gathered below.”

The rustic wooden interiors are both offset and often complemented by an array of carefully selected furniture pieces – including stools by French artists Sido & François Thévenin for the Lebanese-Italian brand Sawaya & Moroni. 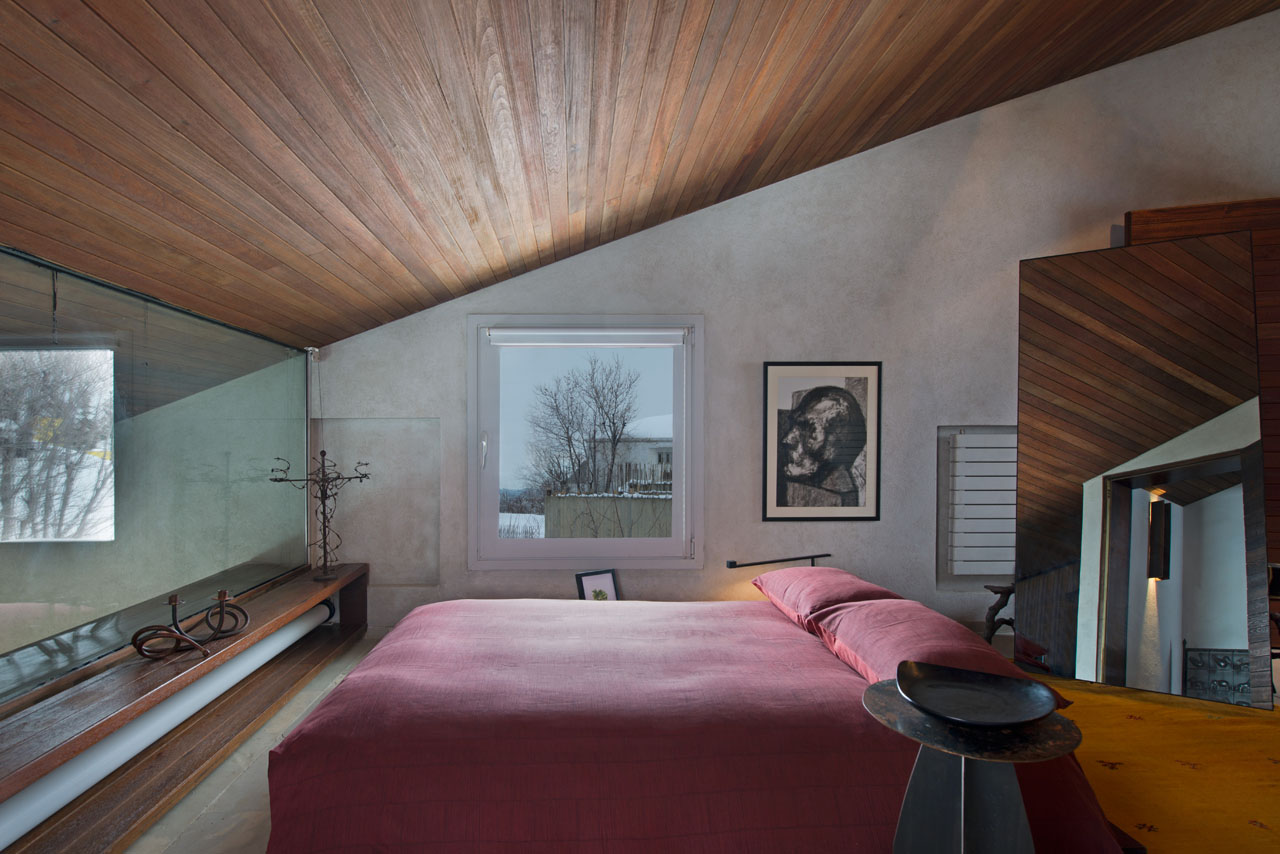 Adjacent to the bar is the living area, where a thick, raw and untreated piece of marble is used as a coffee table. “It’s incredibly heavy so we placed it on two wood slats, similar to how marble is usually displayed at the quarry,” Dada says. A decade-old large plant acts as a divider between the living and dining areas. The latter features a 1985 Alessandro Mendini table coupled with Gio Ponti Superleggera chairs, while the colourful TV room creates a striking contrast with the sober, all-black dining room. Here, the architect has put together a selection of the quirkiest pieces that the family has collected throughout the years, including a Gaetano Pesce sofa, a bright red clay table by Maarten Baas and a polystyrene chair by Max Lamb. 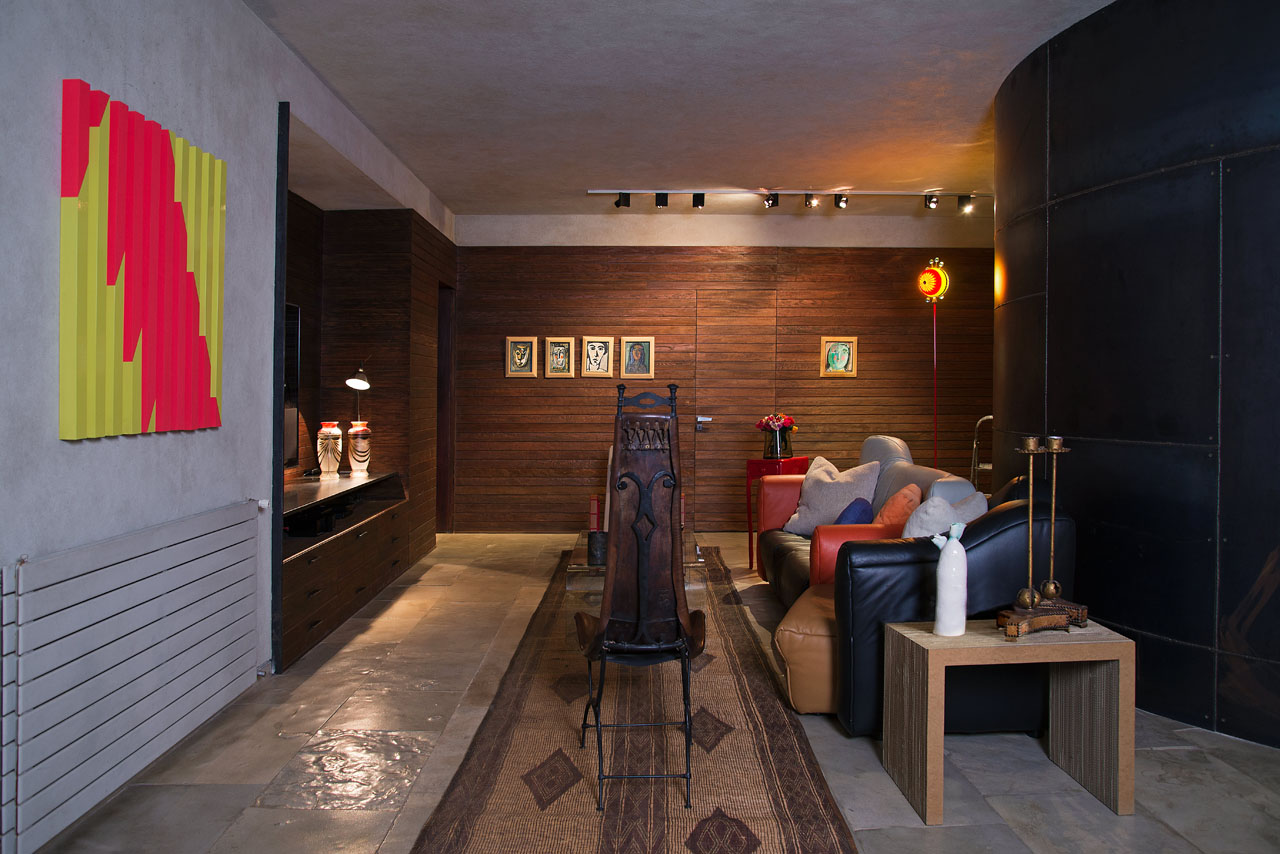 The bedrooms on this level of the house have a lighter atmosphere than the common spaces, where the walls are painted in a plain light grey. “My sons added their own touch to each of their respective rooms,” Dada reveals. “My eldest son’s room is on the second floor and features a wall-to-wall glass window which overlooks the common area below.” 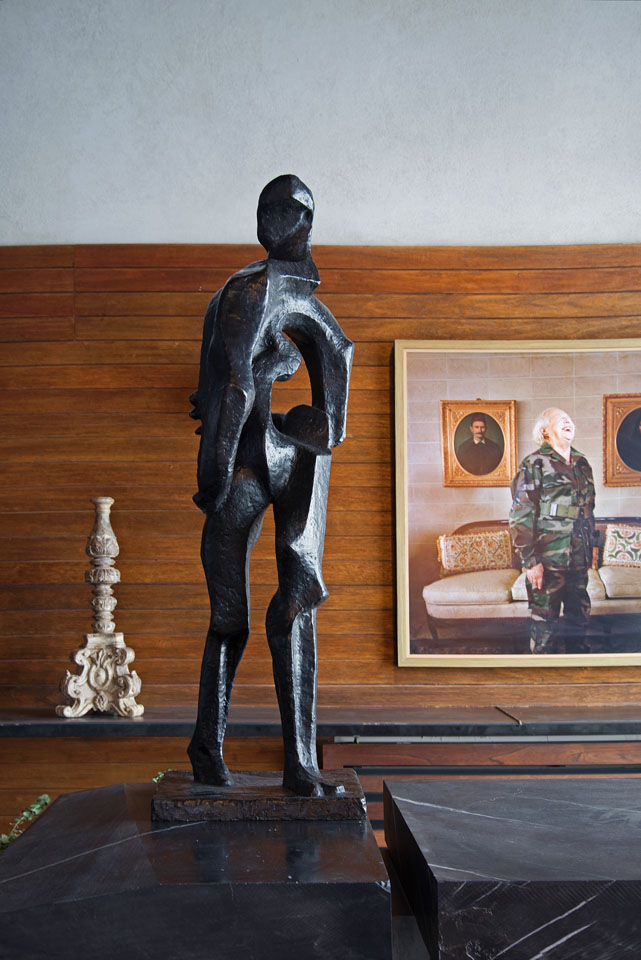 The holiday home also features pieces by Lebanese creatives which Dada describes as his favourites. A bold, dark bronze sculpture by Michel Basbous (“which adds a lot of character to the bar area”), is kept company by a portrait by Lamia Maria Abillama from her Clashing Realities series. A ceramic piece by Marilyn Massoud sits on the ledge of a window and lights up beautifully in the afternoon when the sunlight penetrates its perforated surface. “In the TV room there’s a bright pink and yellow artwork by Rana Begum, which might be the most colourful piece we have ever acquired,” Dada admits. 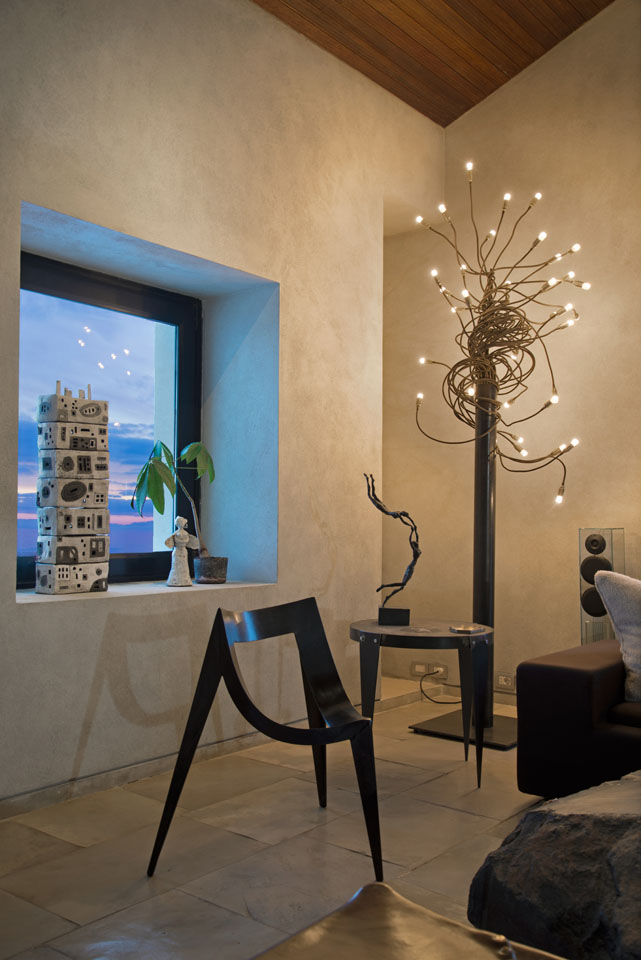 While the materiality and furniture selection play important roles in characterising the space, Dada believes that the spatial layout defines the way the family interacts with the home. “Circulation is key,” he says. “We always try our best to achieve an easy flow between spaces. This is what makes a successful social space and defines the experience in this home, which was designed to bring together family and friends. My favourite aspect of this house is that there are no corridors, so there is no waste of space whatsoever. It’s an intimate, casual place – so there’s no need for boundaries.”