The brief for the building was to create a library for the future, the firm says Located on the Sharjah International Airport Road, ten kilometres from the city centre, is the recently opened House of Wisdom, designed by UK architecture practice Foster + Partners – which already holds a number of high-profile regional projects under its belt, with more currently in the pipeline.

“[The brief for the building was], very simply, to create a library for the future – one that would allow people to gather, learn and exchange ideas,” Gerard Evenden, Head of Studio at Foster + Partners tells identity. “The project was initially referred to as the Digital Library but through our research we found many parallels with the original House of Wisdom, which was set up in Persia in the fourth century as a place for scholars to exchange ideas. We had some great conversations with the client, Her Royal Highness Sheikha Bodour, and her team about how the aims of the building had many parallels with one of the world’s earliest scholarly institutions, which informed the design process.” 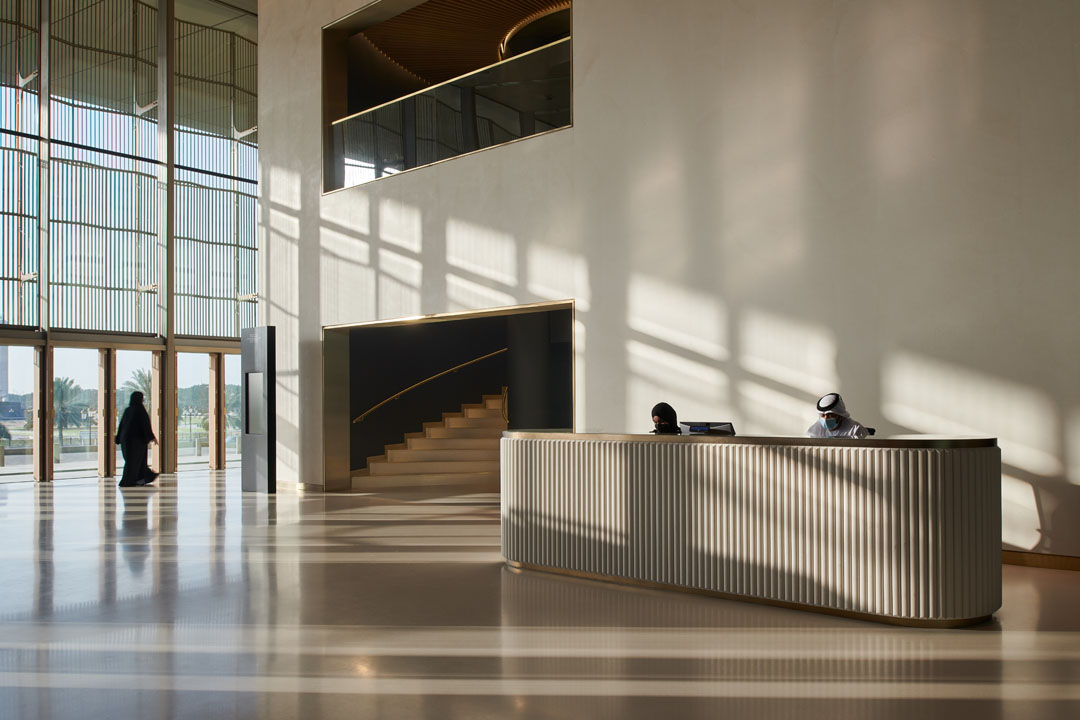 The two-storey building, which houses a library and a cultural centre, embodies a sense of lightness, featuring a large floating roof that cantilevers on all sides of its transparent rectilinear volume. The team at Foster + Partners began the design process by exploring the woven Barasti architecture that’s native to the region, which strongly influenced the design of the building envelope – “a very lightweight box,” Evenden describes.

The 15-metre-wide overhang shades the façades throughout most of the day, while fixed aluminium screens of differing densities filter the low sun in the evenings. Users are encouraged to interact with its architecture by adjusting moveable bamboo screens, either for privacy or to control glare. When not in use, the bamboo screens are left open in order to preserve the connection between the building and its landscaped gardens. 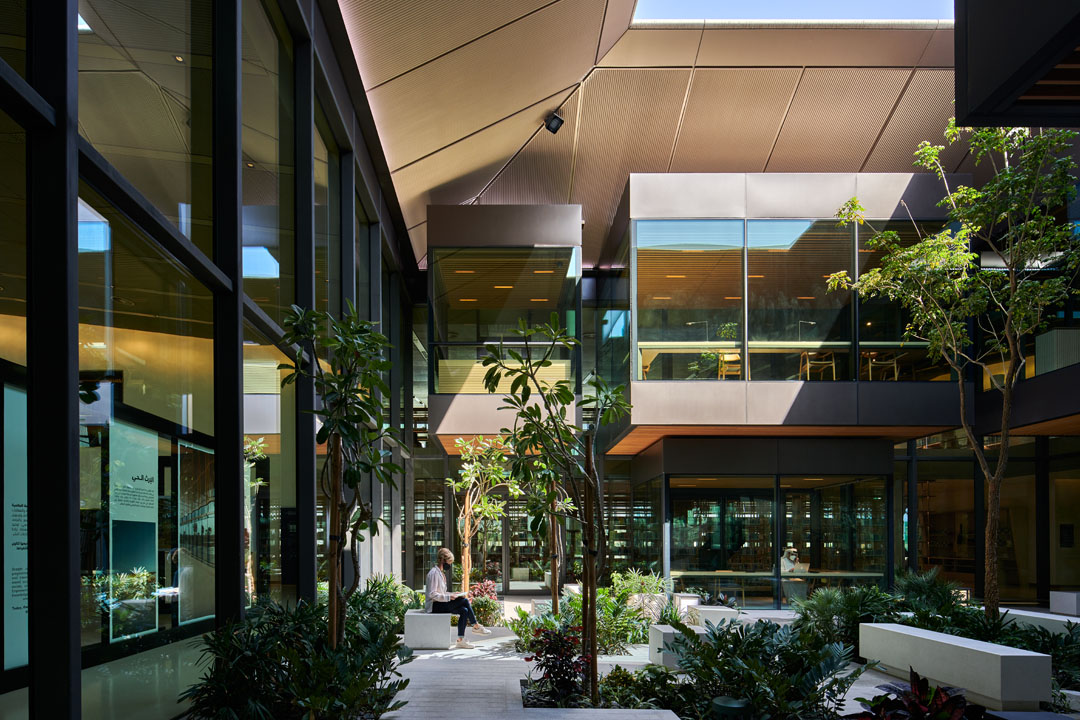 “The moveable screens allow people to moderate their local environment by adjusting the amount of light that illuminates the space they occupy. This allows them to create a personalised environment for focused work. Working within a tight budget, we were keen to use CNC production to maintain a high level of quality while keeping costs low through mass-production processes,” Evenden explains.

Housing both a library and a cultural centre, the building’s two functions have been integrated to promote communication and “cross-fertilisation of ideas.” 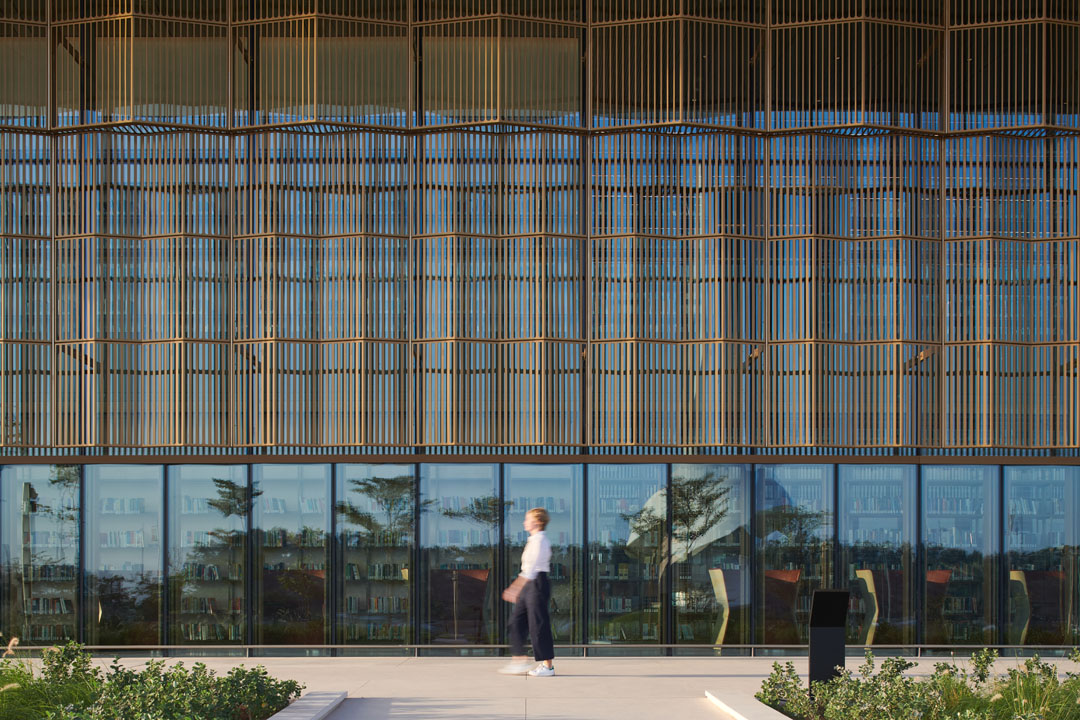 “In our experience, overlapping uses creates a richer programme that promotes learning – something we were keen to bring to the House of Wisdom. This also creates a certain flexibility that will allow the building to meet future needs and changing patterns of learning. This is increasingly important from the point of view of sustainability.”

The building was designed to be open and inviting within a simple square plan, laid out as four distinct quadrants around a densely planted and shaded open central courtyard. Inspired by the Oasis in Al Ain, the courtyard acts as an outdoor venue for social events or as a space for isolation and contemplation. The floating roof of the building is supported by four cores that also contain all the back-of-house and service spaces, creating a large column-free floorplate. 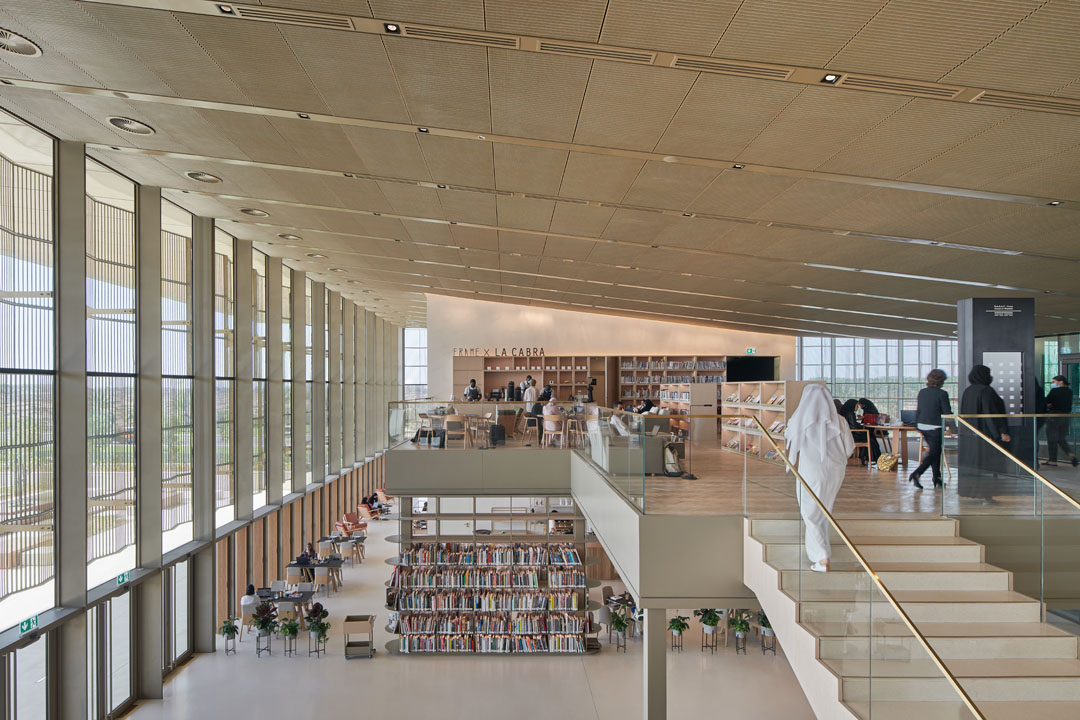 Visitors enter the building from its western edge, into a double-height reception. The expansive ground floor contains large spaces for exhibitions, as well as a café and a children’s educational space. It also houses the archive and a reading area with various facilities including an ‘Espresso Book Machine’ that prints and binds books on-demand. The upper floor hosts a series of pod spaces suspended above the central courtyard, which offer quiet and collaborative spaces, exhibition areas and reading lounges, including a prayer room and a women-only area. Throughout the building, there is an emphasis on establishing and retaining a connection with the outside, looking onto the gardens surrounding the building. The main book library and research part of the building is set over two floors towards the south of the building, with its façade open onto the landscaped garden. 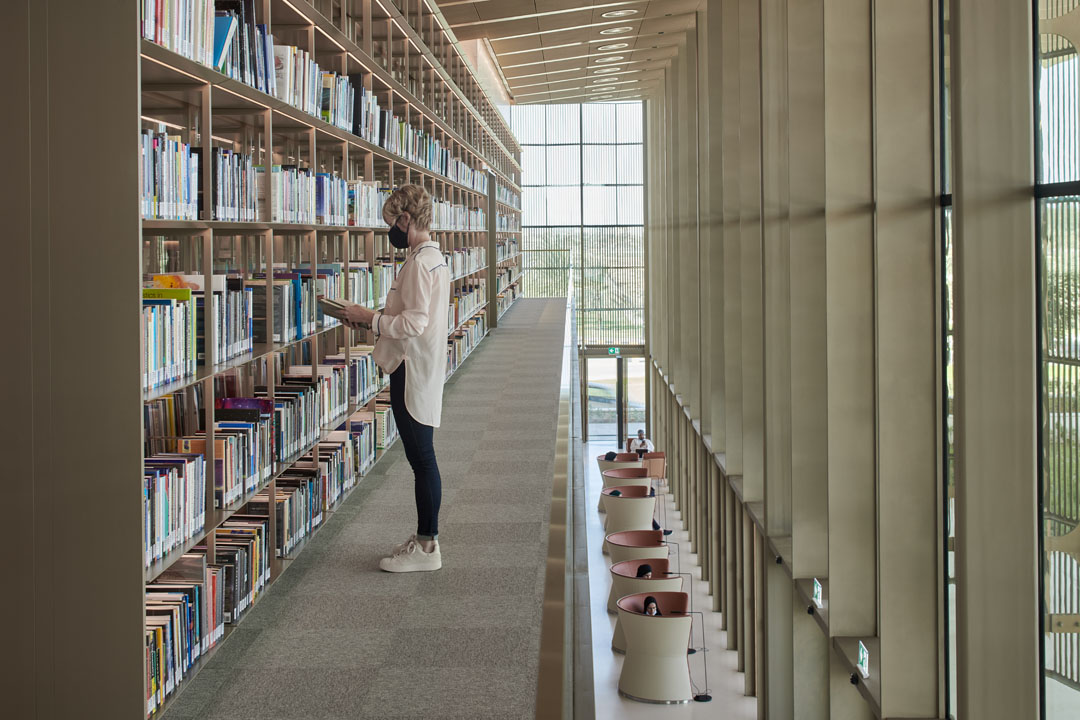 Divided into two sections, the landscaping – which is a vital part of the overall complex – features a knowledge garden and children’s playground to the south, and includes several native species and a water feature, alongside a more formal, geometrically arranged garden to the north containing ‘The Scroll’ – a public art piece by British artist and designer Gerry Judah. The sculpture is a contemporary interpretation of the ancient Arabic scrolls as a single, spiralling sculpture that loops towards the sky and commemorates Sharjah as the UNESCO 2020 World Book Capital. Additionally, it creates a dialogue with the House of Wisdom and its landscaped gardens and water features, connecting the two parts of the complex together with the hope of encouraging visitors to also explore the outdoor landscape, which has been specifically designed to complement the building’s programme. 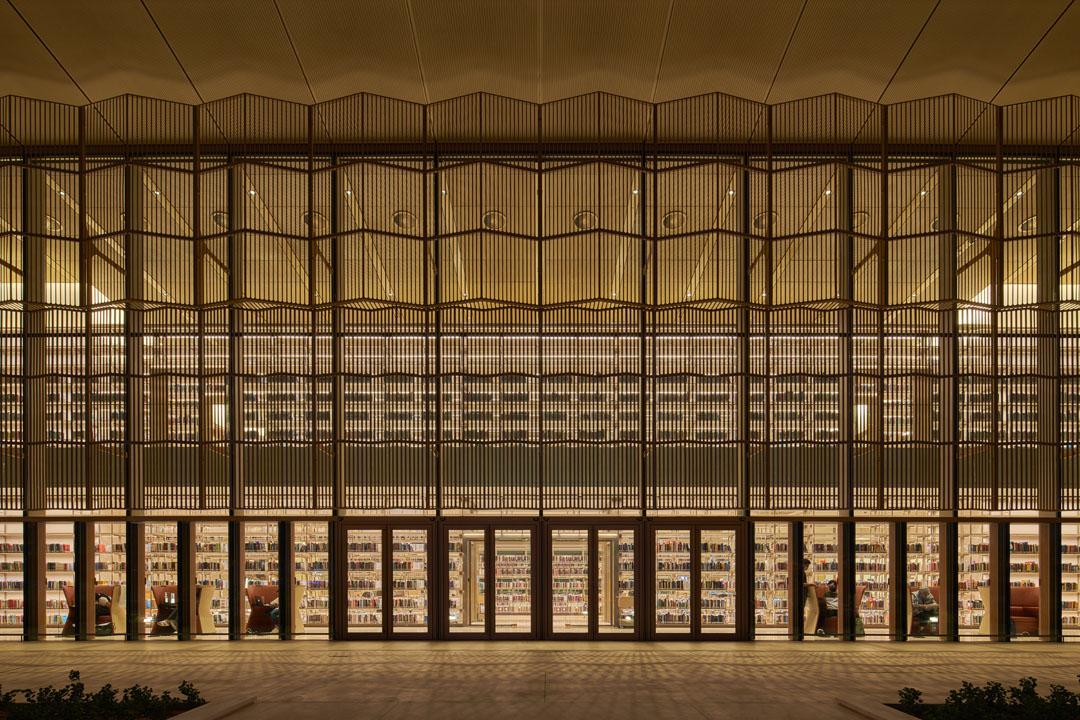 In order to create a library and community space that is relevant to the 21st century, the team at Foster + Partners visited libraries around the world to understand best practice. 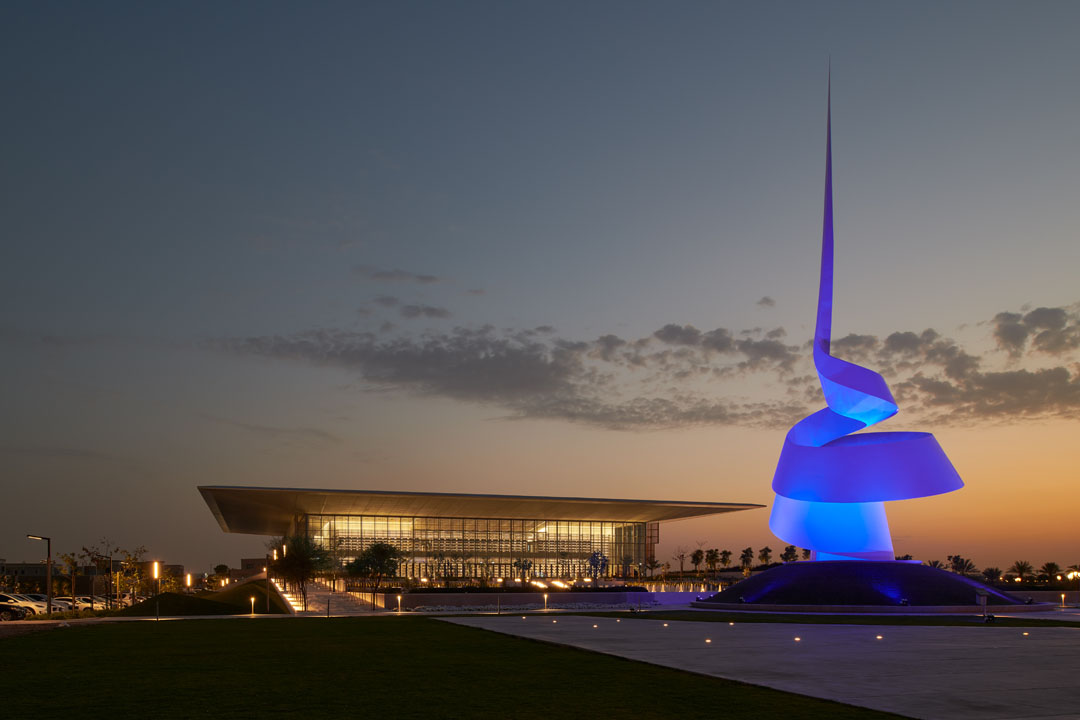 “We found that the most successful spaces allowed people to use the building through an extended period – a 24/7 community space that belonged to them,” Evenden says. “Alongside the libraries, there were spaces for talks and lectures, larger social areas, cafés for food and drink, child-friendly spaces – all functions that encourage people to come together. We planned the House of Wisdom by plotting many ‘day in the life scenarios’ of different potential user groups – including students, senior citizens, young mothers, school parties, evening class groups and authors – evaluating their needs [and] clarifying our approach at every step.”

At its core, the House of Wisdom is designed as a flexible place for learning, encouraging people to come together to share ideas.