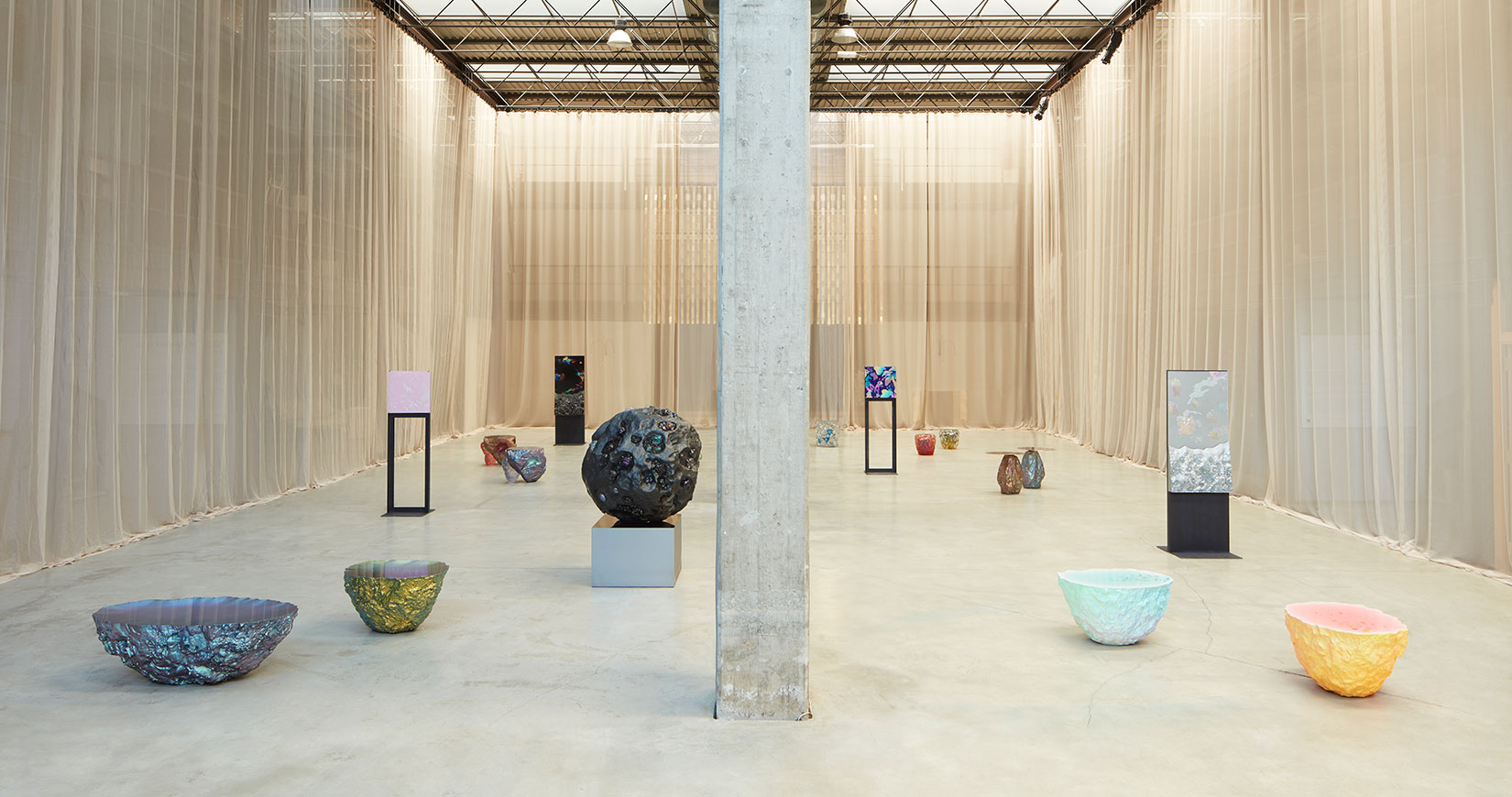 How did the ideas behind this exhibition develop?

The show at Nilufar reveals the delicate, vulnerable and unstable state of our territory due to the over-abusive exploration of the planet, and questions our position within the Anthropocene. Terra (In)firma seeks to destabilise our encounter with the terrestrial and imagines a post-human topography. Rocks, symbols of solidity, become disorientating with the fluctuation of light due to their iridescent and reflecting surfaces. In navigating this uncanny plain, we encounter fragments of hyper-liths dispersed through space, rupturing our sense of stability. Rocks become fluid, tilting on their axes, conglomerating. Forms caress and nudge each other in tender relations. Digital aesthetics warp our sense of material nature, hybridising the organic and synthetic. Ultimately, Terra (In)firma confronts us with the Promethean dilemma; should the Earth be treated as a resource whose utility is determined primarily by human needs? Can human technology overcome our environmental problems? Terra (In)firma not only evokes the vulnerable and unstable state of the planet, but also the contradictions of our dual dependency on nature and technology, with its ongoing battle between the physical and digital worlds. 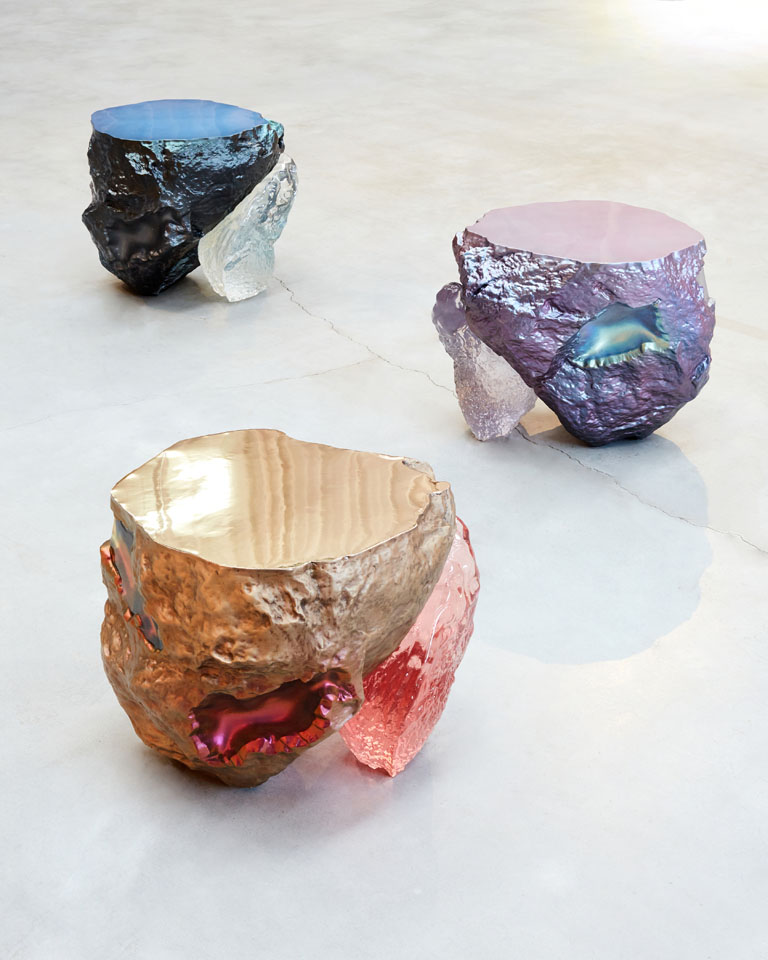 How are the pieces produced? What materials do you predominantly work with?

All the works are fabricated in various workshops across the UK. Technically, it starts with digital modelling, then CNC and 3D printing of shapes and tools, and going through the manual process of moulding and casting. Depending on the type of cast material, the surface will be polished, or spray-painted and then lacquered. The spray work is done by hand. I experiment with pigments and surface effects to echo a certain digital aesthetic. Often, happy accidents and experimental discoveries reshuffle the choreography of the process. 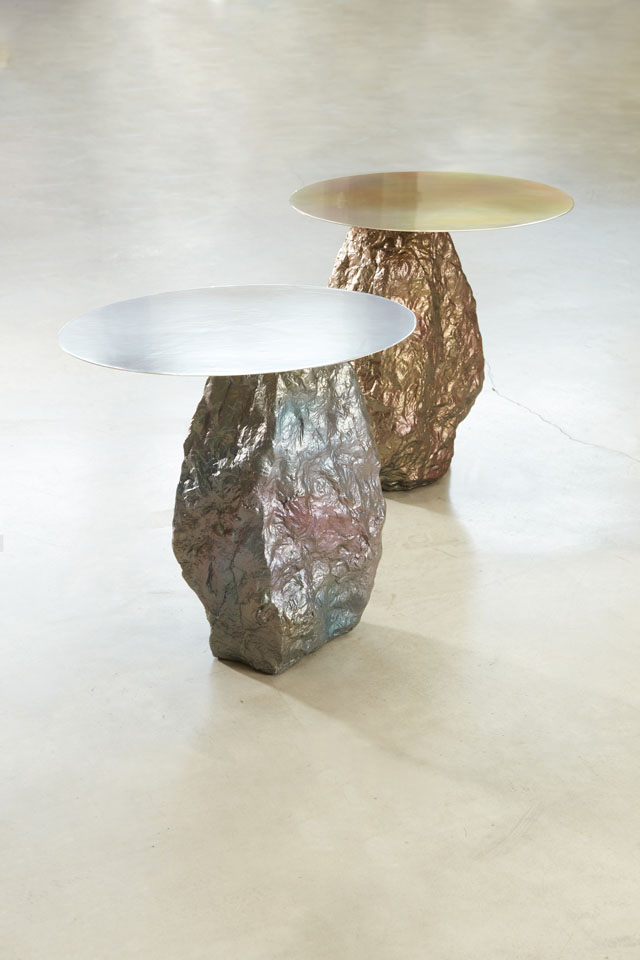 My interest lies in the combinations and alliances of digital techniques with craftsmanship. What fascinates me the most is not the traditions, technologies and conceptual concerns themselves – but how these different influences are linked together. 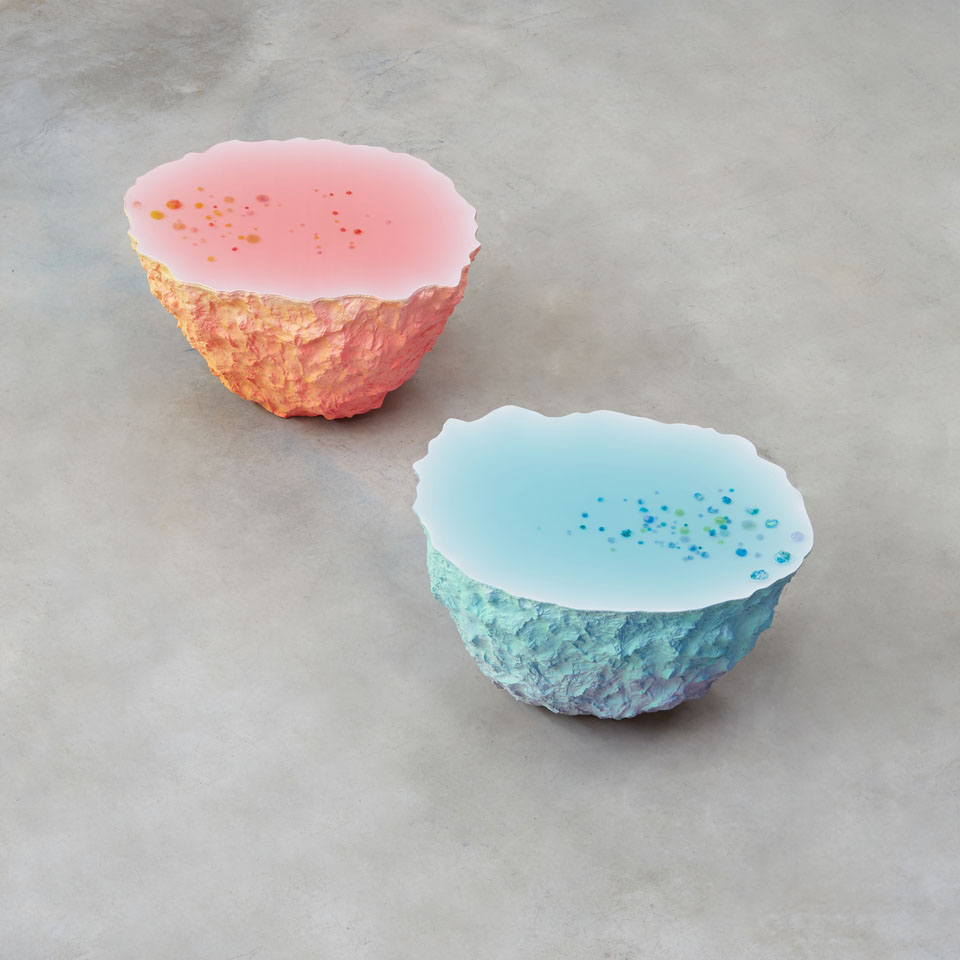 For Nilufar’s solo show, I have Iayered several surfacing processes. The bridging of diverse digital techniques with traditional craftsmanship reveals a certain ambiguity. The man-made and the industrial robotic manufacturing processes are blurred. The work looks earthy, naturally aquatic and digitally rendered – all at the same time. I strive to keep a certain mystery behind the works. In the show at Nilufar, there was no predominant material. Pieces are in bronze, resin, steel, silver, fibreglass, glass, paint.

Can you talk about the significant choice of colour in the pieces?

The significant choice was the use of iridescent colours. Throughout the show, there is the recurring use of iridescence on surfaces. We live in an era of iridescence, in constant oscillation between physical and virtual, never fully in the physical and never fully in the virtual. We are shifting between the realms, in the same way colours are shifting on an iridescent surface. I manipulate colours so they appear formless and in a continuous state of flux, suggesting indeterminacy and limitlessness. Iridescent pigments are shapeshifters and never static, as they transform with each changing position of the viewer’s body. 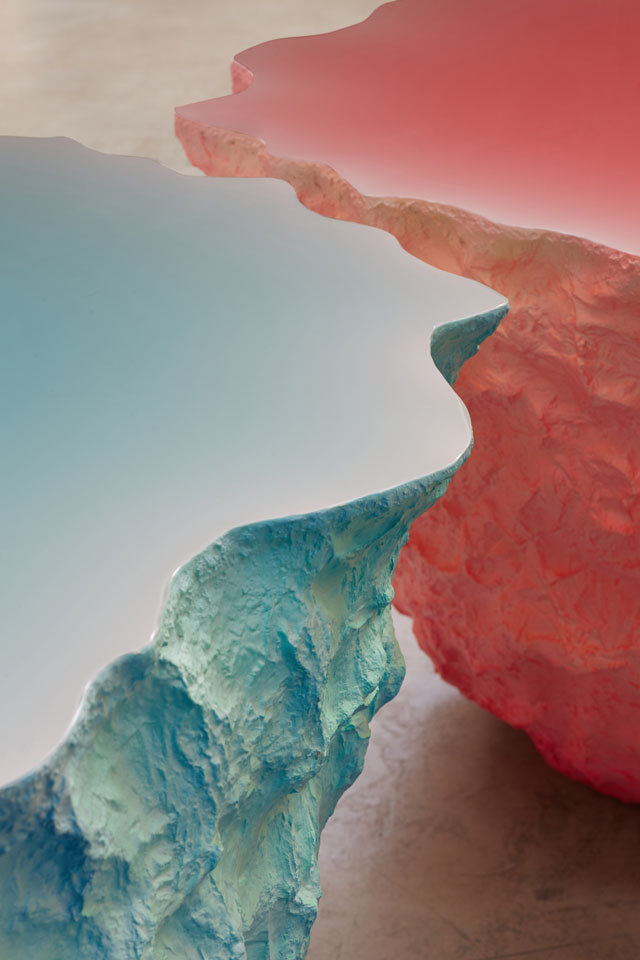 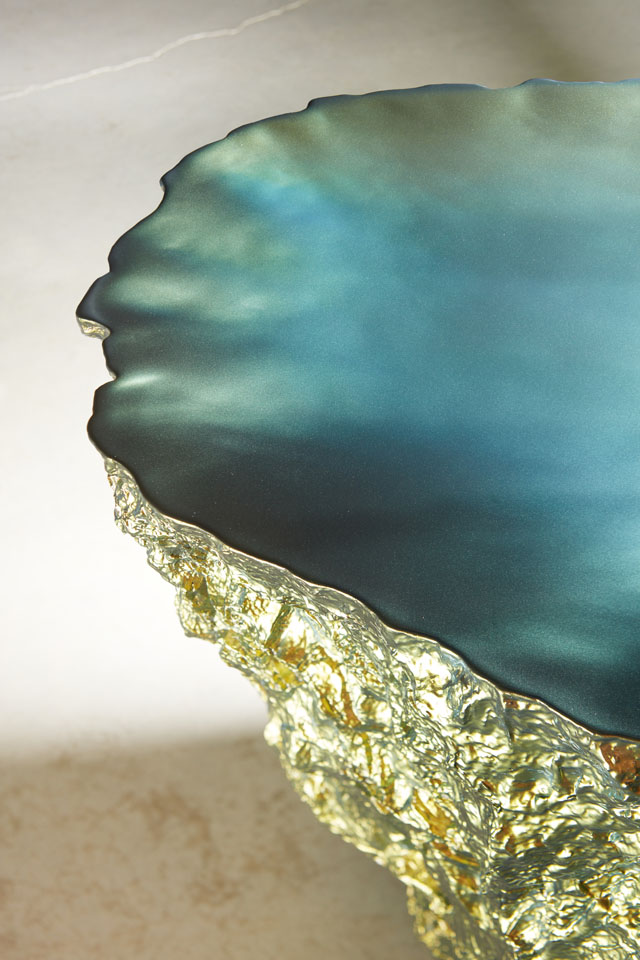 What inspires your work?

I am often guided by an adoration for a sense of wonder with the world, and inspired by the spiritual significance of landscape fragments such as gongshi, suseiki and Japanese rock gardens. At the moment I am particularly inspired by Hydrofeminism theories, solidarity between watery bodies. My inspiration comes from an accumulation of material experiments and explorations of digital modelling and fabrication techniques. The digital tools we have today are so powerful in shaping our reality, and I think about their potential to create new forms and attribute new behaviours to future geologies and landscapes. How can these tools be a catalyst for new contemporary aesthetics? 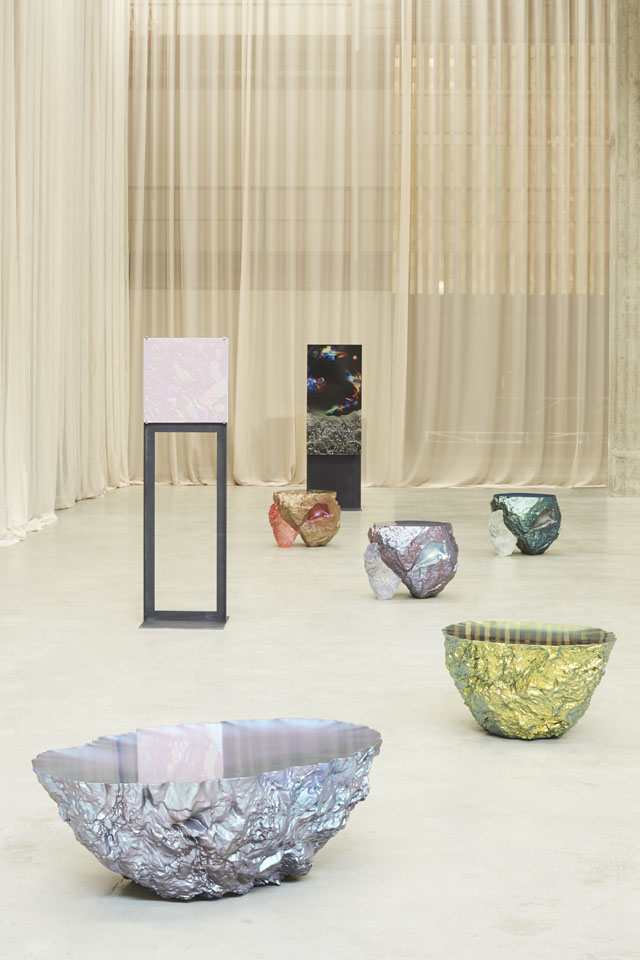