Saudi architect Sumaya Dabbagh, founder of Dubai-based Dabbagh Architects, has been crafting a portfolio of culturally relevant projects across the Gulf, including the likes of the Mleiha Archaeological Centre in Sharjah (which was nominated for the Aga Khan Award for Architecture in 2019) and the upcoming Al Ain Museum of Archeology. Her latest project is the Mosque of the late Mohammed Andulkhaliq Gargash, located in Dubai’s industrial zone of Al Quoz, which reflects the architect’s poetic approach and confident control of light, form and materiality to create a building that is contemporary in its architectural nuances. Never short of narrative, the Gargash Mosque is designed to transition the worshipper from the material world into an inner spiritual experience.

“Creating a space of worship was a very particular design challenge,” Dabbagh confesses. “Prayer is a devotional act. It requires the worshipper to be totally present. With all the distractions in our modern busy lives, it can be challenging to quieten the mind and find an inner calm to allow for full immersion into prayer. Through the design, a series of spaces are created that allow the worshipper to transition from the busy outer world and prepare for an inner experience.” 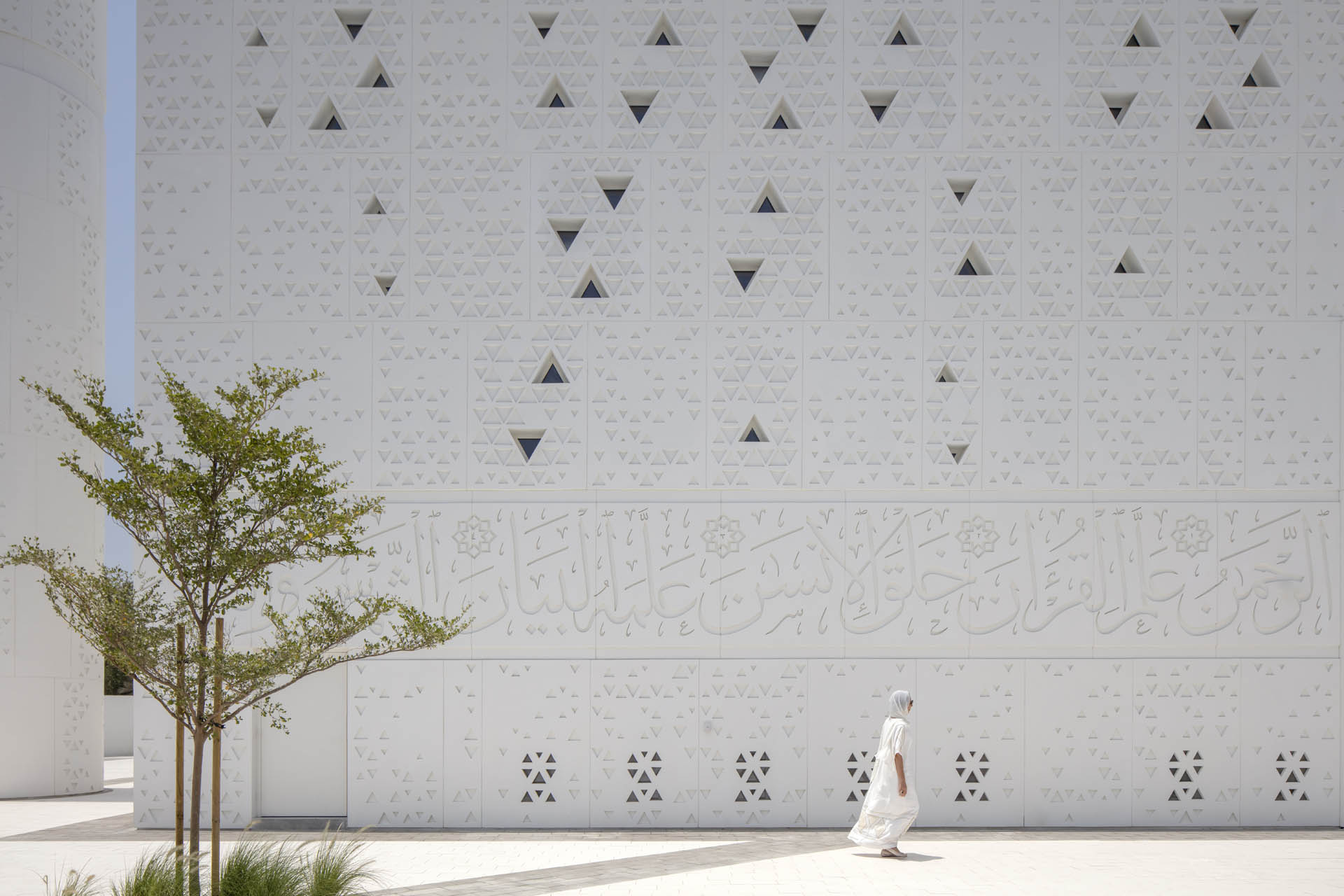 The mosque is divided into two separate volumes using simple and minimal forms: one being the prayer block containing the male and female prayer areas; the second being a service block containing the ablution facilities and residences of the Imam and the Moazen (the caller of prayer). The division creates a courtyard that is covered by a sculptural canopy of steel cantilevered arms extending from either side of the two volumes, appearing as if reaching out to the other, but not quite touching. This physical metaphor emphasises the relationship between the earthly and spiritual functions of the two separate masses. The aluminium cladding also creates cool shading for worshippers accessing the mosque. The inner face of the courtyard is clad with Omani stone – part of the firm’s approach of sourcing materials either locally or regionally. 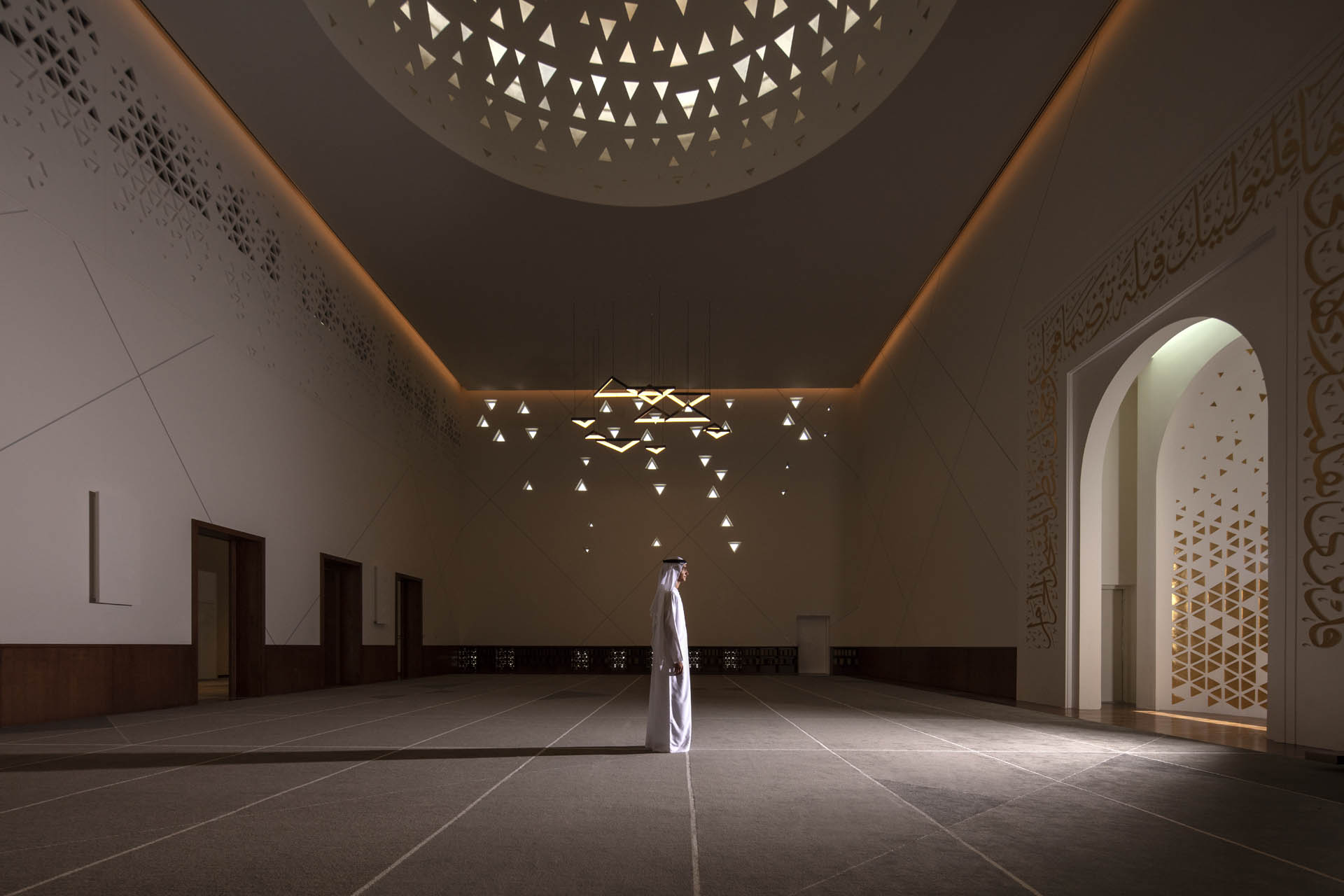 The minaret, which alongside the dome marks the two main visual components of a traditional mosque, is designed as a separate volume. 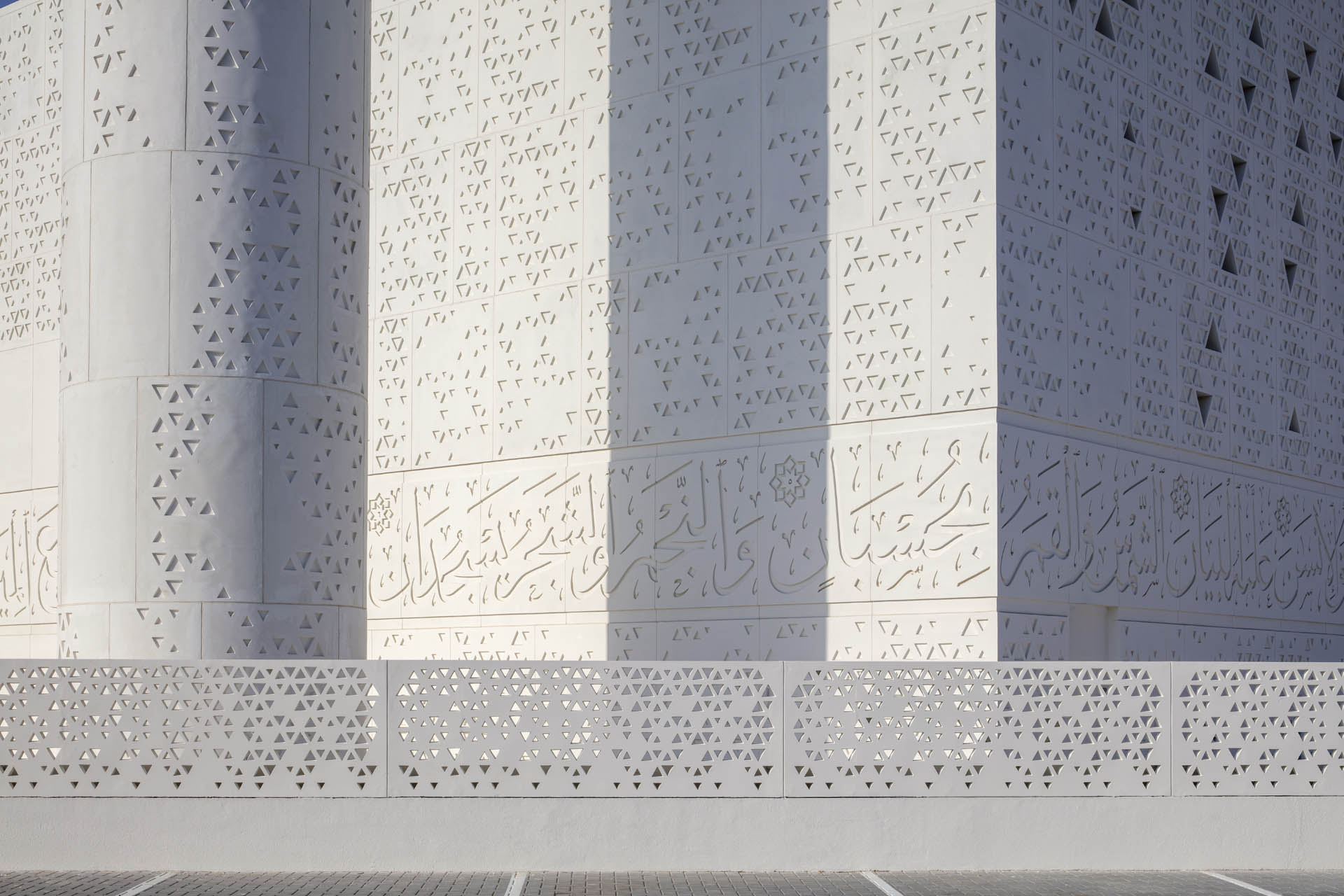 “[The word] ‘minaret’ in Arabic means beacon,” Dabbagh explains. “Symbolically, the minaret is a visual beacon or a signifier of the mosque in a neighbourhood. Thus, as part of our minimal approach, we wanted to maintain the integrity of the minaret form from that of the mosque form and chose to express them as sperate entities.” 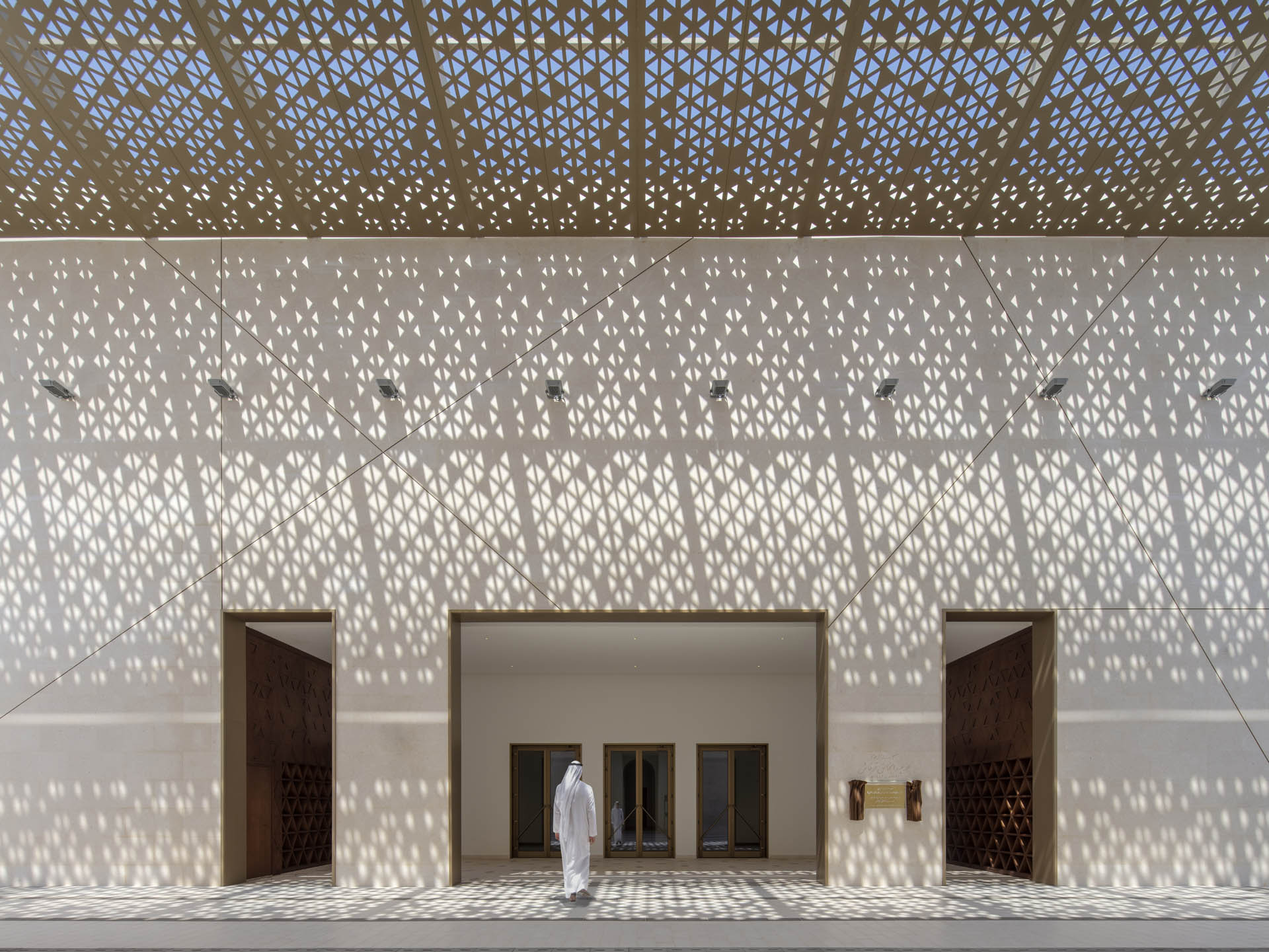 Although the project sees a variety of components that eschew traditional Islamic typology, there are many visual links across the design that create its harmonious and cohesive design, such as its strikingly white exterior and the use of geometry and calligraphy. 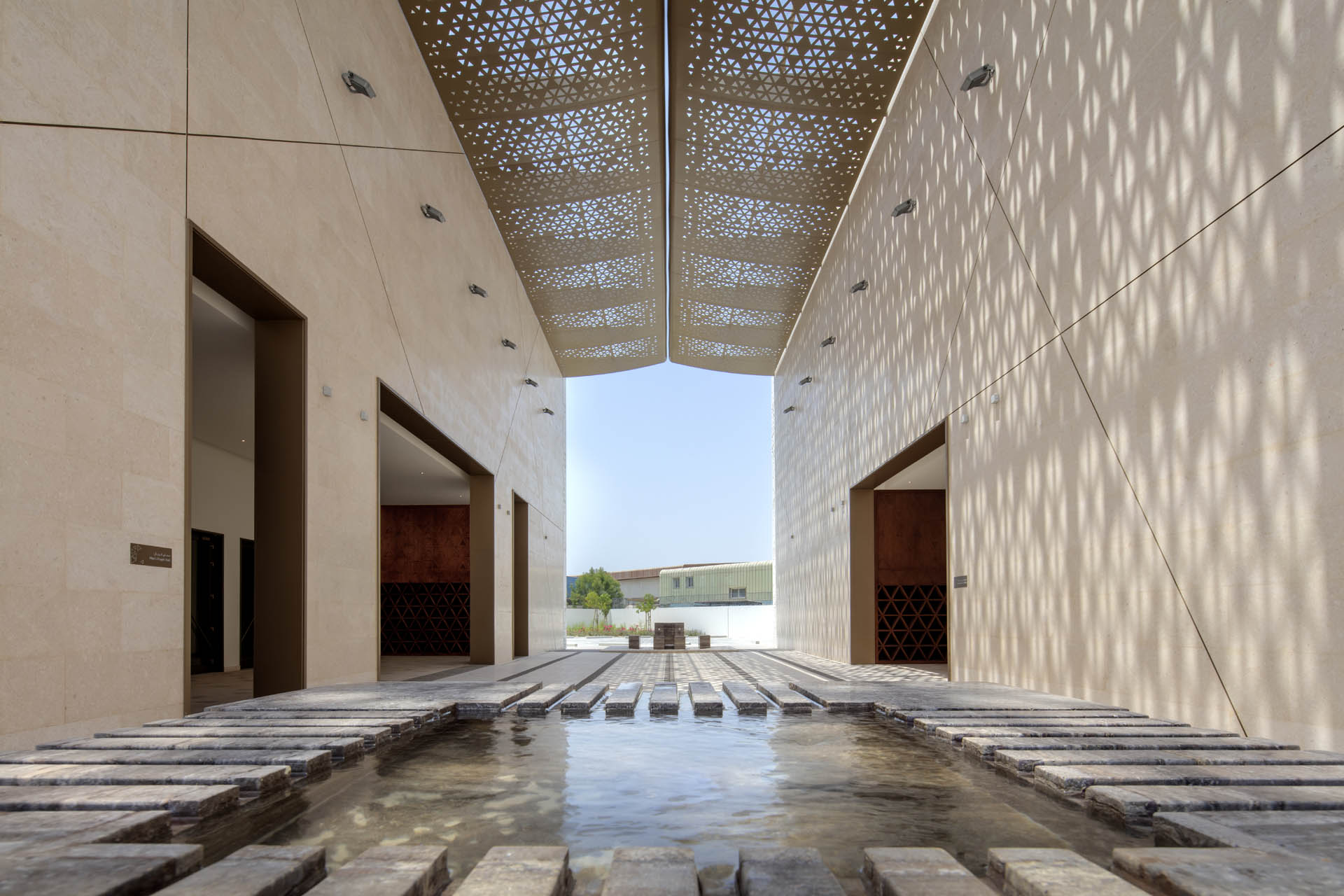 Clad with GRC (glass-reinforced concrete) panels that have been manufactured in the UAE, the building’s skin is perforated and recessed with triangulated patterns that reference traditional Islamic geometry, albeit reinterpreted using a deconstructed, contemporary language. Internally, these perforations scatter natural light into the areas of worship, illuminating the spaces and helping to keep the mosque’s interior cool. The double skin dome also allows natural light to enter, filtering it through the internal decorative skin, which incorporates the same triangulated pattern as the rest of the building, creating a connection between the exterior and interior. The reinterpreted Islamic patterns and triangulated geometry additionally harmonise throughout the interior as lines intersecting across walls, carpets and light fittings. 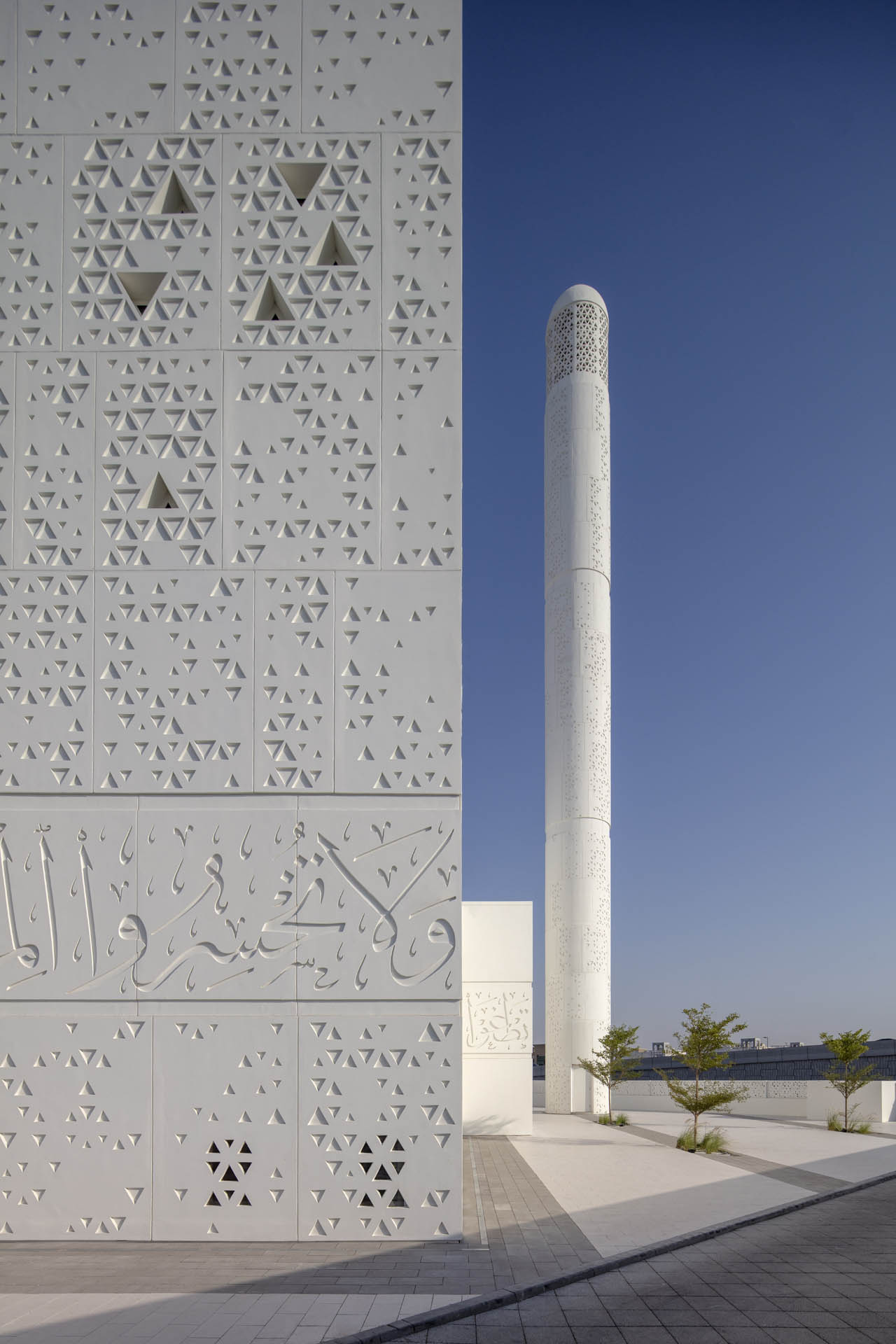 Using natural light throughout the project is a key consideration and can be additionally observed in the skylight placed above the mihrab that invites worshippers’ attention towards Mecca as the direction of prayer, as well as in the shafts of light from the narrow openings on the sides of the building that further create a sense of illumination. 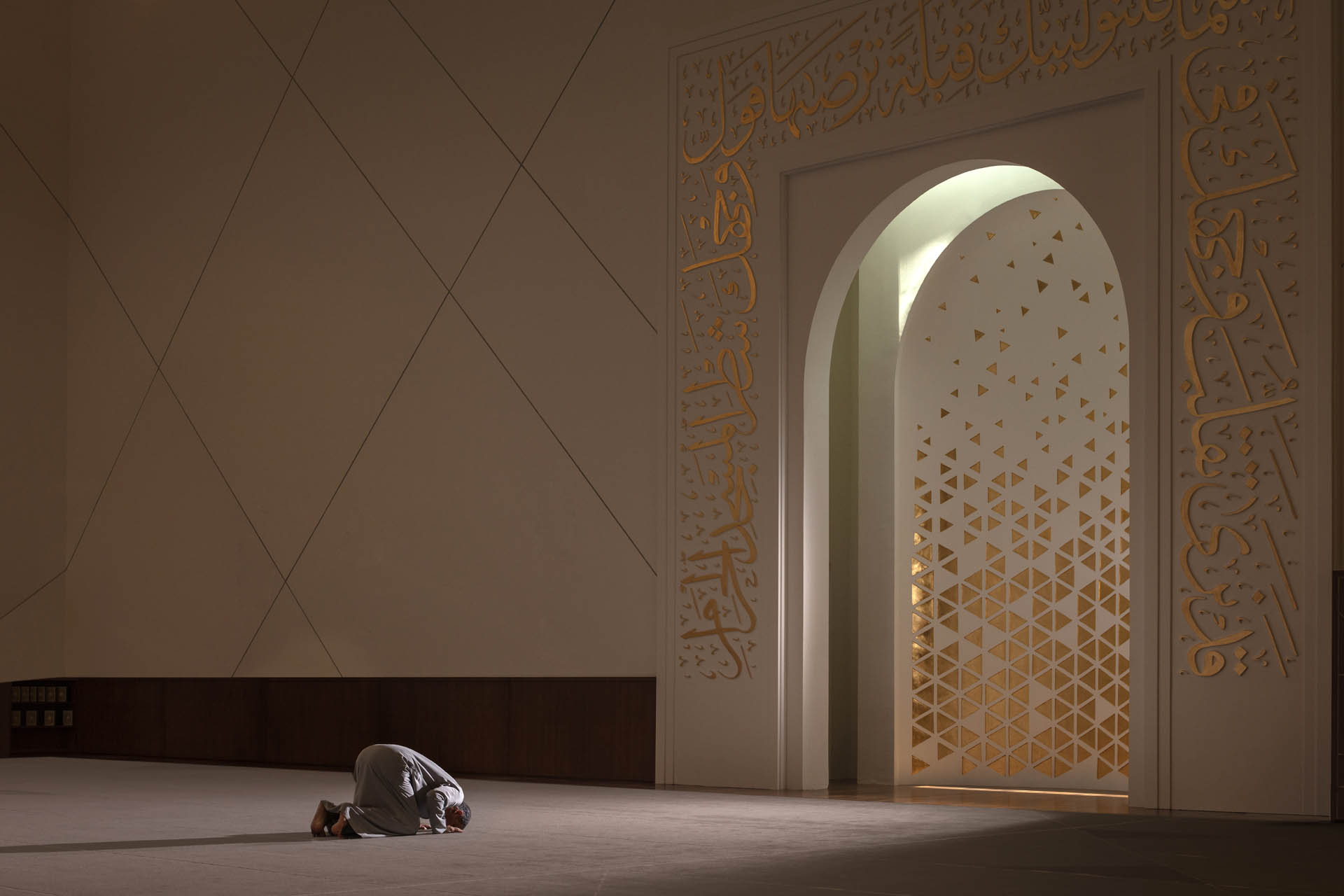 Finally, a surah (verse) from the Qur’an wraps around the prayer hall externally to create a metaphoric protective band, signalling the spiritual nature of the space. The verse ‘The Most Merciful’ is composed entirely in ‘saj’, a rhyming prose characteristic of early Arabic poetry. 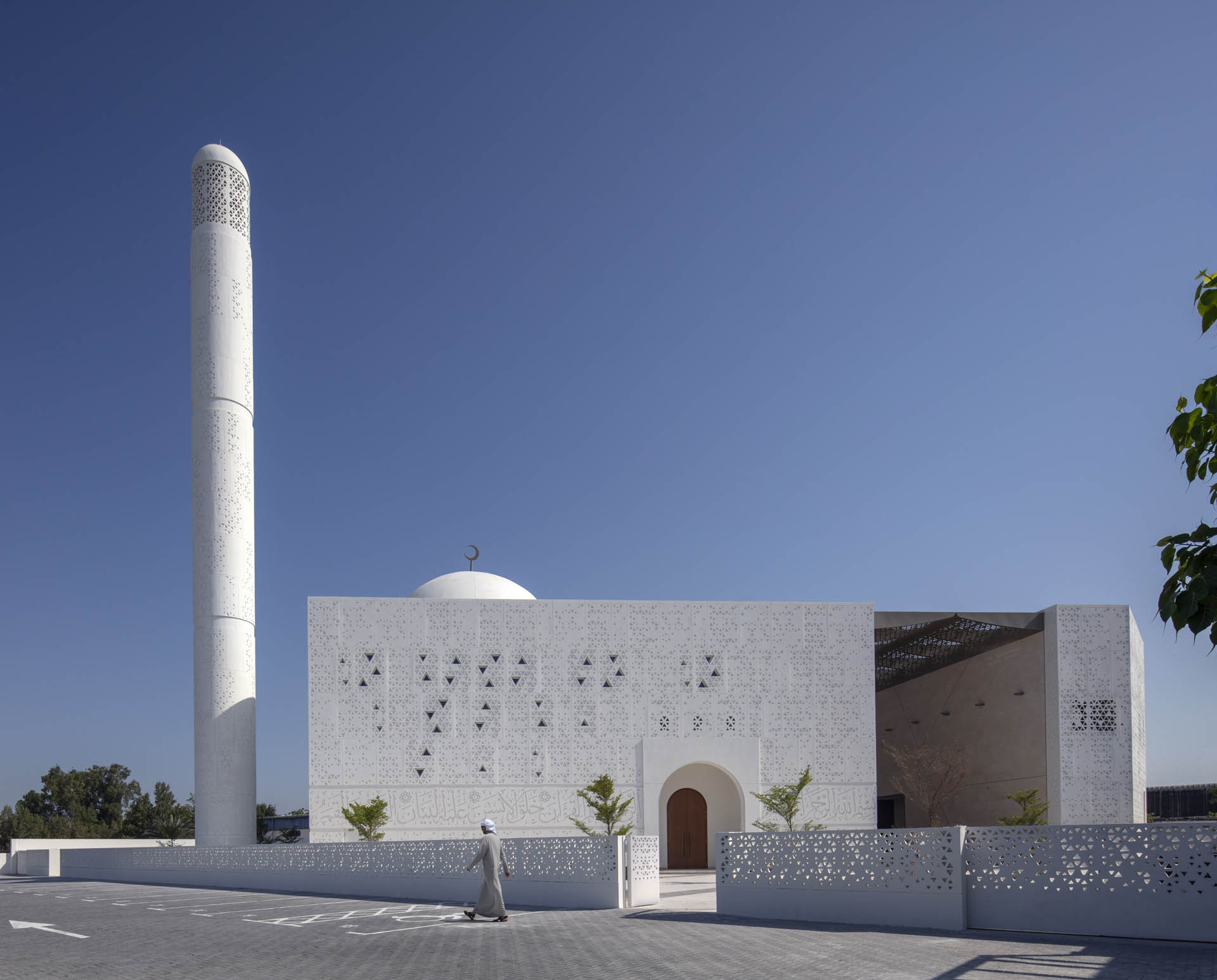 “At the end of each project my hope is that the building will evoke the feelings and emotions that were envisioned at the outset,” Dabbagh says. There is a defining, magical moment when the building is born and claims a life of its own. For this, my first mosque, that moment was particularly moving. I feel truly blessed to have had the opportunity to create a sacred space that brings people together for worship.”