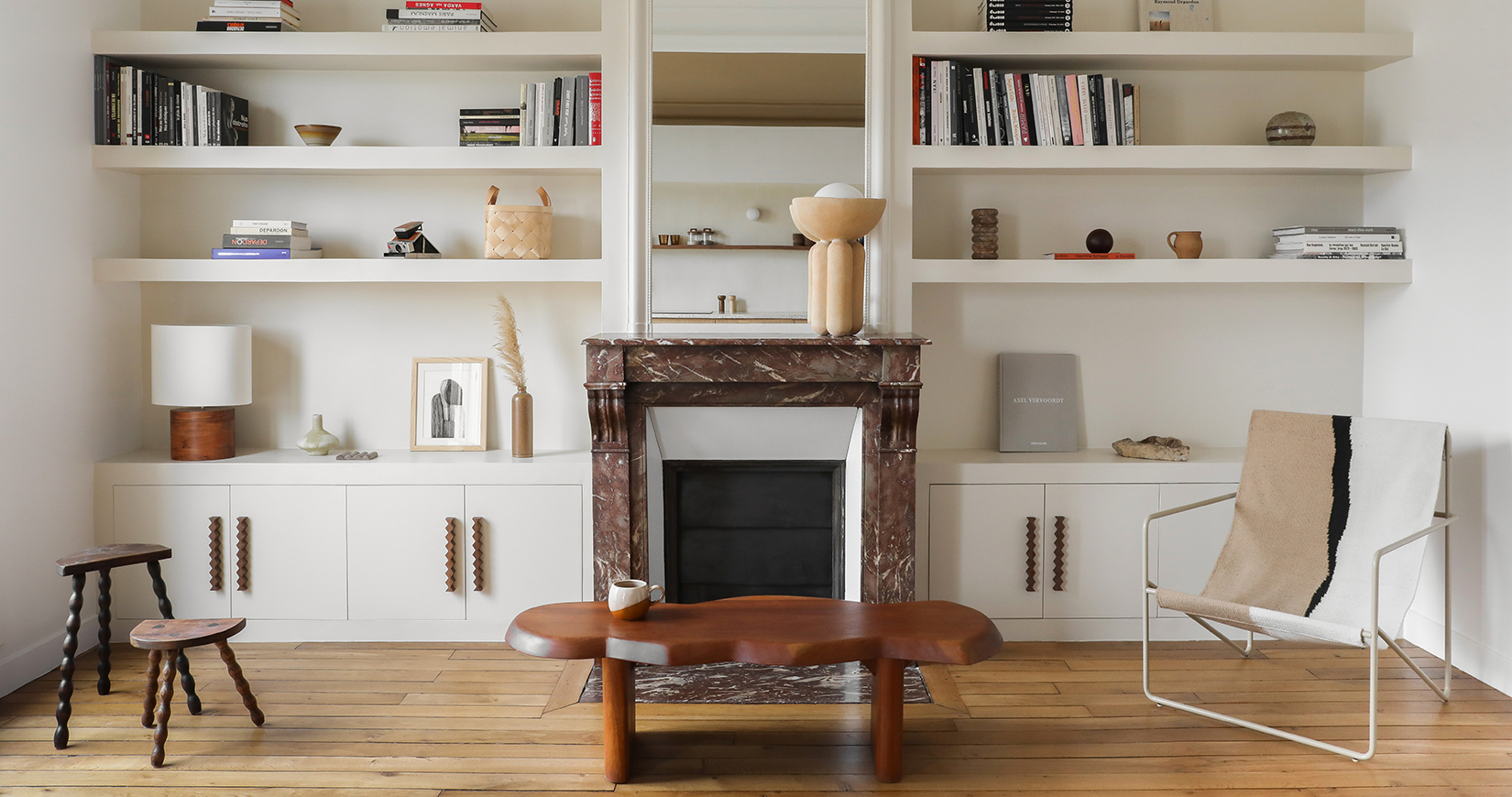 “Our projects are the result of a deep spatial and functional thinking, consistent with the essence of the place and the lifestyle of our clients,” say Hélène Pinaud and Julien Schwartzmann, the creative French minds behind interior architecture studio Heju. The young duo met while they were studying in Strasbourg and, after graduating, they decided to launch their studio (six years ago) in Paris. Since then, they have been expressing themselves through private and commercial projects, which reflect Japanese and Scandinavian influences through timeless and poetic spaces. While the colour white is the base of their work, Pinaud and Schwartzmann introduce colours to create contrasts and highlight a specific shape or architectural elements, striving to bring to life atmospheres that awaken all senses and create emotions. “For us, beauty lies in the simplest details,” they say. 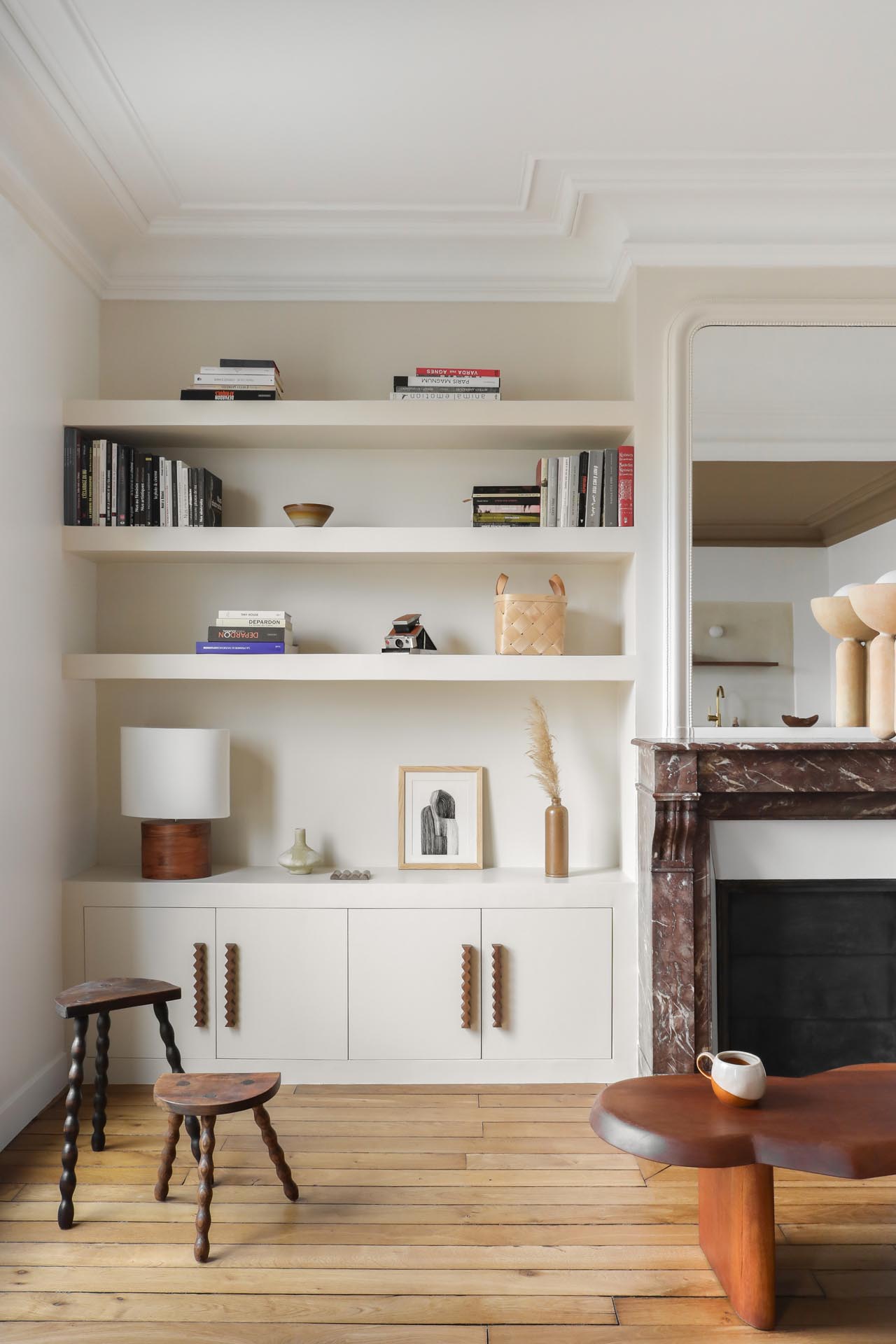 Located in the lively 11th arrondissement in Paris, this 45-square metre apartment with a balcony is situated on the fifth floor of a typical Haussmann building. For their first home purchased together, the young couple of Parisian photographers trusted Heju Studio to renovate and reorganise the different spaces. The star-shaped plan comprises an entrance/corridor that gives access to the bathroom (which used to be the kitchen), a separate toilet, the bedroom and the main living area consisting of the living room, dining area and kitchen. 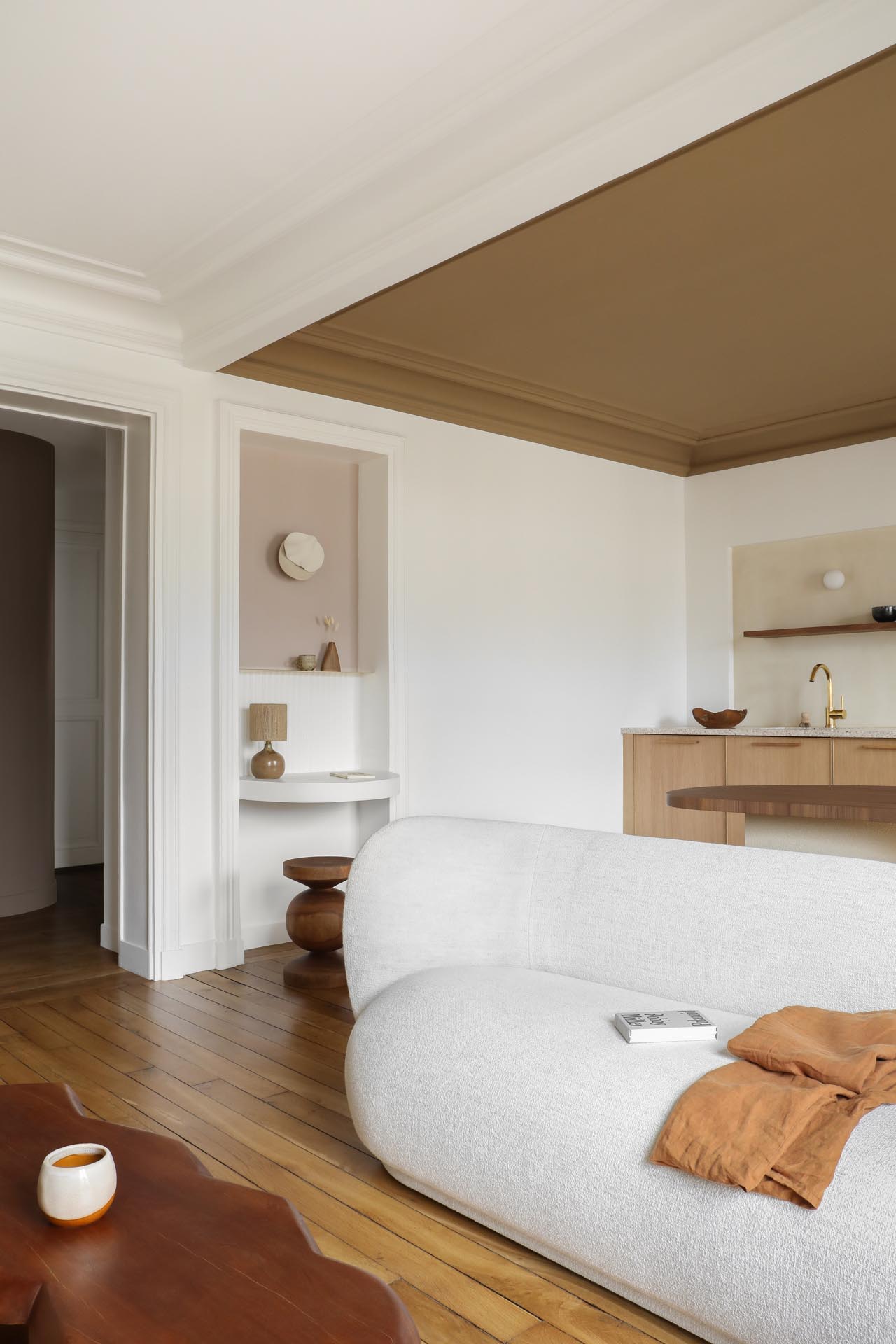 “Originally, the main living area was divided into two, and we chose to open it entirely in order to make the most of the volume,” says Pinaud. “We also added a rounded wall in the entrance (that you can see from the other side of the bathroom) to create free-flowing spaces.” Optimisation and personality were at the heart of the concept. “The client wanted a minimalist apartment with colourful touches and natural materials,” Schwartzmann says. “We were completely aligned in terms of inspirations.” Warm and soft tones prevail, while pops of colour visually divide the space. This is the case in the office nook that connects the living room to the kitchen, and with the green ceiling that delimits the area where the couple eats. The stone flooring with a shower in zellige in the bathroom, the terrazzo in the kitchen, waxed concrete in some parts of the walls (including the alcove in the bedroom) and the two types of wood (oak and walnut) are intended to develop patina over time for added character. 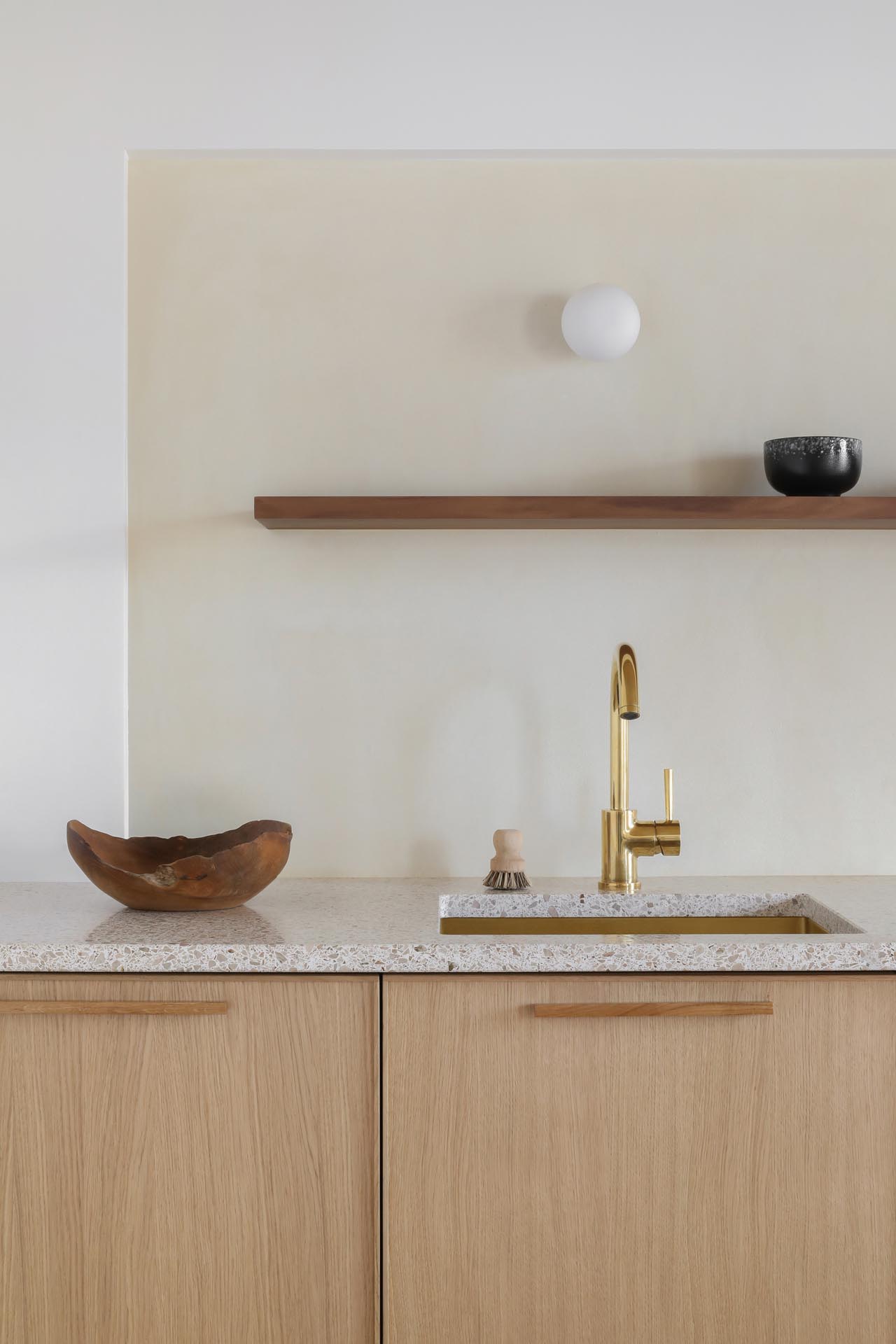 “As the apartment is small, we wanted to create an intimate architecture, [and] a comforting and minimalist cocoon at the same time,” the interior architects explain. “We were inspired by the work of designer Frédéric Pellenq. We actually installed the handles he designed on the doors of the bookshelves in the living room.” 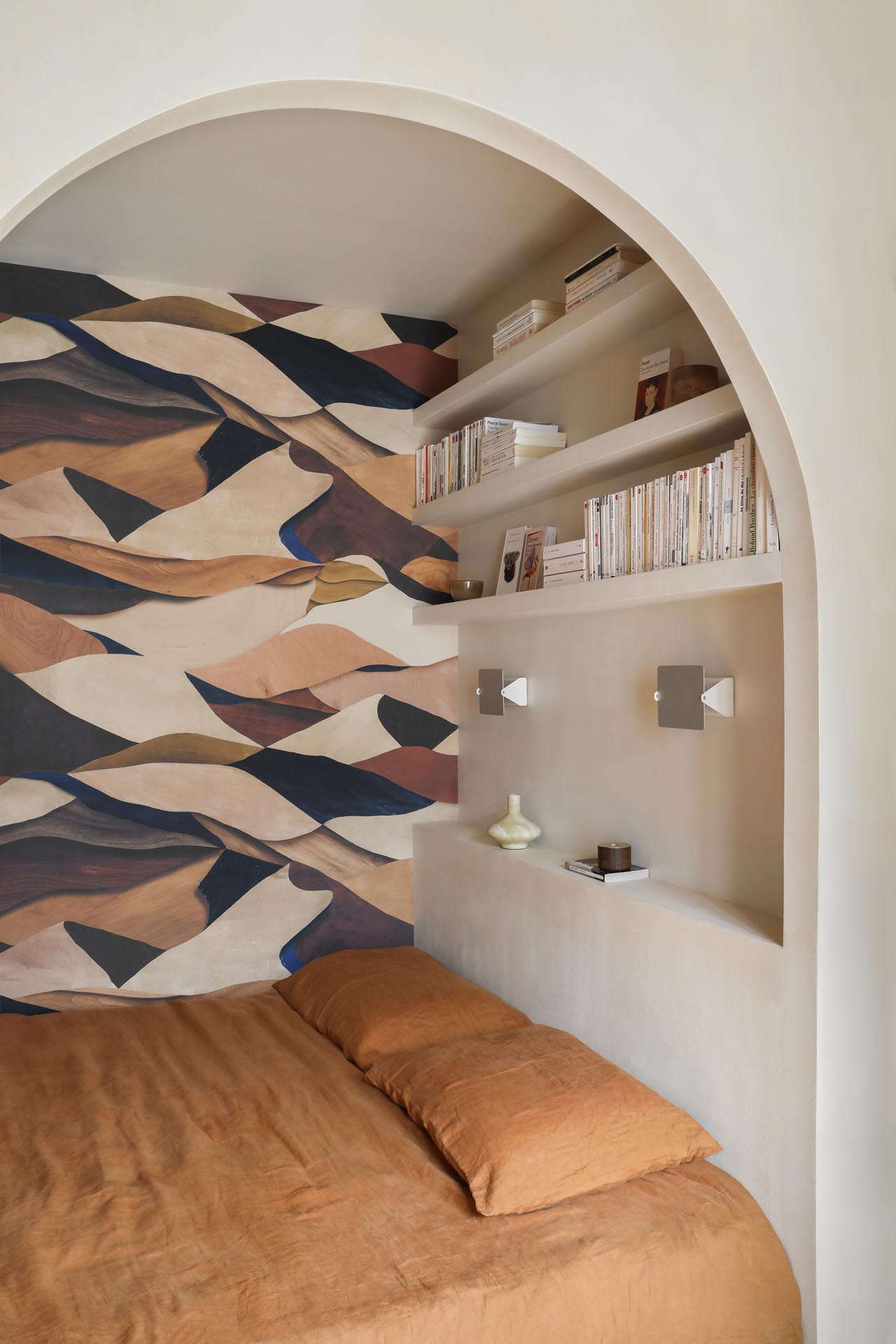 In addition to the furniture and lighting pieces by Ferm Living, Marcel Breuer, Charlotte Perriand, Flos and Contain (among other names), the duo designed a made-to-measure dining table specifically for this project. “We wanted feet with a light texture,” they say. “It took us time to find the right effect and balance, but we are very happy with the result.” Through their sensible approach, where raw and minimal elements mix with strong lines and soft hues in a calm ambience, Pinaud and Schwartzmann reflected the owners’ personalities. “We found the tones of their films and photographs,” the interior architects say. “Our client didn’t want any light coming from the ceiling because, according to them, it doesn’t create a beautiful light. So we had to find other solutions and we did it through many sconces and table lamps.” Always transforming constraints into opportunities, Heju Studio masters the art of simplicity in their own way.