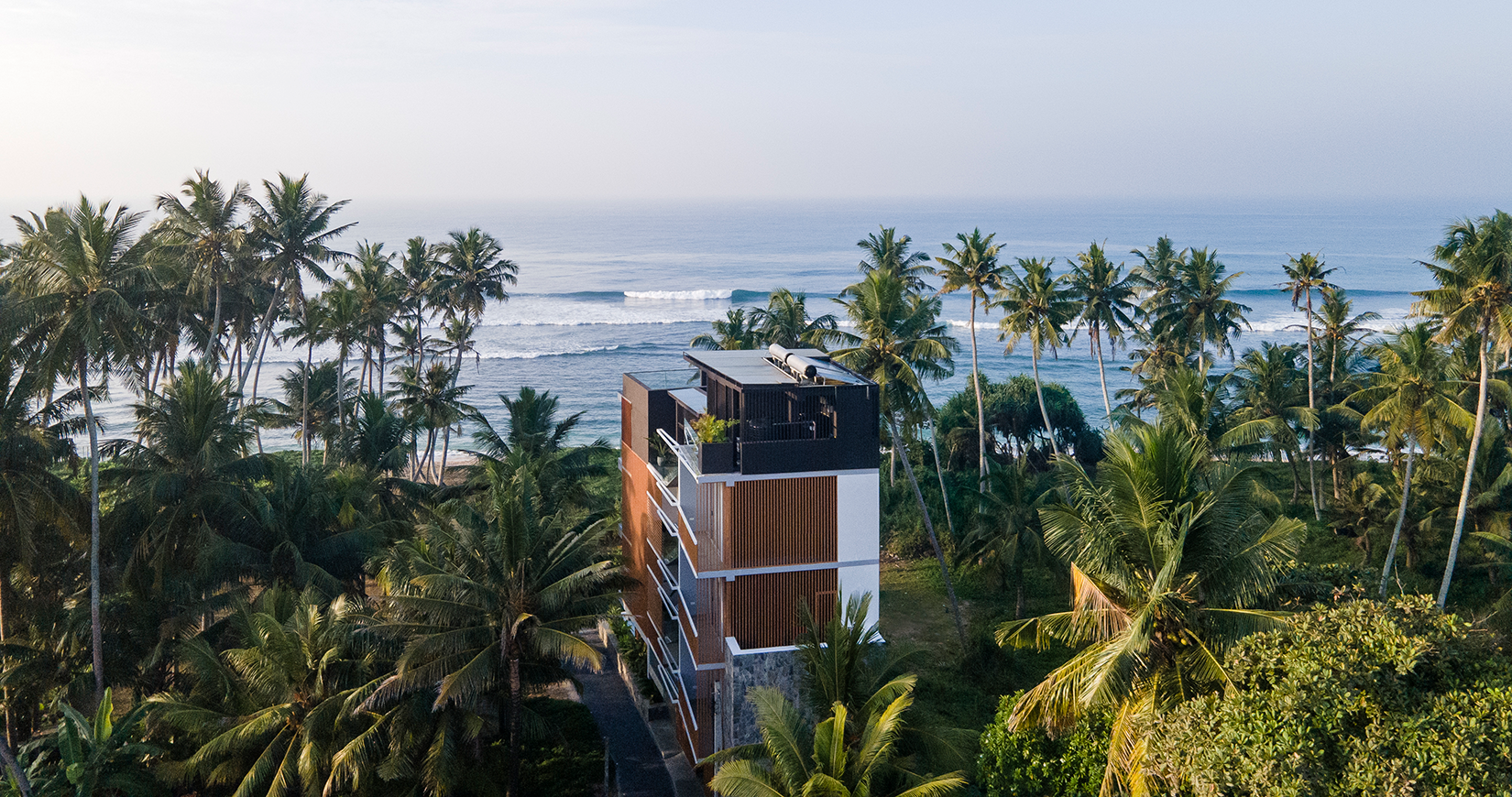 While Sri Lanka’s Southern Province continues to be highly sought-after for its lush landscape of endless coconut groves, its tropical climate and a popular surf break, architectural prowess is not a feature that is often associated with the area. Yet the small region is, in fact, home to a number of private houses designed by some of the most prominent architects of the century, including the likes of Tadao Ando and Shigeru Ban, in addition to hotels such as Amanwella, designed by Kerry Hill, and some of the earlier works of the famous Sri Lankan architect Geoffrey Bawa.

“You essentially have four globally prominent star architects on the south coast of a relatively discreet country, on an island where people just fell in love with the natural beauty and commissioned amazing architects to do great work. That was an inspiration for us. It was [also] quite intimidating, but why not?” laughs Jonathan Ashmore, founding principal of Dubai and London-based architecture practice, Anarchitect.

The studio had been approached by Australian-Sri Lankan hotelier Paul Harding to design a boutique hotel in the coastal town of Ahangama, located on a plot that is a mere thirty-minute drive from the UNESCO World Heritage Site, Galle Fort. Ashmore, who was already in Sri Lanka’s southern coast at the time working on a private villa, was also nearing completion of the studio’s first destination hotel, Al Faya Lodge, set in the Sharjah desert. The Harding Boutique Hotel felt like a natural next step in developing the studio’s passion for small-scale destination hospitality. It was also the complete climatic antithesis to the studio’s previous project, which proved to be an interesting challenge.

“Architecture can be a key component to the guest experience,” Ashmore comments. “A lot of times, I feel that more [attention is being paid to] the decoration or the interiors [of a hotel], while the exterior of the building doesn’t relate. But there are many examples with hotels like Aman and Habitas, where people will travel for the architecture, which is so intrinsic to its context and its culture – it’s an individual one-off experience. That’s what I wanted to do [here],” he explains.

Harding also confirms that for him the hotel was a passion project (which he funded in its entirety), but also one that is very personal. “Gem Milhuisen was my great-uncle and one of the premier hoteliers of Sri Lanka, an innovative pioneer who opened the country’s first Geoffrey Bawa-designed hotel, The Blue Lagoon, Negombo,” he recalls. “I wanted the property to be in keeping with my great-uncle’s vision and creation – almost a continuum – with references to Bawa throughout.”

Already from the first sketching session, Ashmore drew the building that comprises the Harding Boutique Hotel as we know it. The vertical structure – an uncommon choice for a building of its kind – follows the exact footprint of the previous building that was destroyed by a tsunami, and kinks at the back to allow views towards the ocean and the town to the rear. The narrow east-west cross-section of the hotel encourages natural cross-ventilation that filters the prevailing coastal winds across the interior spaces which are marked by their permeability, resulting in a consistent feeling of being both indoors and outdoors, and in touch with the surrounding natural elements. The infinity-edge swimming pool on the ground floor is slightly elevated to rise above the vegetation and allow for privacy, complete with a pink pigmented pool deck inspired by the area’s clay-coloured soil and resting by the hotel’s small café.

As one moves up, the six-suite property offers garden rooms that have a dual aspect, with framed views to the coconut groves – almost like extended artworks – to one side as well as open-air rain showers, and a front-facing set of rooms that look out to the ocean and each feature both an outdoor bath and rain-shower, with sliding panels which can be opened or closed upon preference.

“But the complication [here was] that an outdoor bathroom or shower is usually on a horizontal spread,” Ashmore explains. Despite this, the architect insisted that connection to the outdoors was a key architectural component of the Sri Lankan hospitality experience. “We challenged ourselves and asked, ‘can we design a vertical building that creates a new perspective on the south coast?’” he recounts.

Besides the rooms, which are subdued in their material and colour palette, with references to Scandinavian design, the façade and internal staircase of the hotel forms a building that is dynamic in nature, mirroring its bustling surroundings while remaining considerate of its climate and natural context.

“There is a lot going on outside,” Ashmore says. “It is a dynamic façade which takes quite a bit of influence from the footprint of the building, but it also engages with this idea of slight shading and cross-ventilation. The open apertures between all the slats allow the wind to flow but it is also safe and secure; it is enclosed. At night it becomes a bit of a lantern while in the daytime it draws in the natural light. So, the only areas that are truly air conditioned are the insides of the guestrooms.” The façades to the staircase and private balconies are purposely dynamic and interactive for the guests to easily manipulate by hand to alter the building in response to various changes – such as wind and sunlight.

The staircase itself is fundamental to the whole building and is the most intersectional space within the entire structure that leads up to the rooftop terrace bar. On each half level there is a small nook, either for respite or as a place to socialise.

“You get all of the elements around you: the wind, the smells, the birds, the beeping of the horns of the tuk-tuks going by – everything is in that staircase. When you arrive at the building and you look all the way up three storeys, you see all the guests and staff just circulating around – so it is very social and it is again about creating that dynamism,” Ashmore says. “It animates the building, so that when everyone is asleep is it very still, but the moment everyone is awake it becomes dynamic and the silhouettes of the people from the day to the evening make it a building you want to go in and explore.”

Collaboration with local craftsmen and contractors was also vital to the realisation of the building – which was delayed by almost two years due to the pandemic, which brought additional challenges to the project due to the six-month lockdown in Sri Lanka as well as an import ban, making materials scarce and difficult to come by. Anarchitect decided to explore traditional techniques and materials, which were comfortable for the makers to understand while still pushing the boundaries of their application. “It was a simple material palette and nearly everything was locally sourced,” Ashmore says. “We really didn’t want to bring large imports [in], and everything was sourced from a close proximity, and [only] as far as the capital, Colombo.”

“We didn’t want to layer too many elements into this building to make it busy visually, or to make it complicated to build,” he continues. “We had to make the building practical to be built with local knowledge and new challenges – but still within the parameters of what is possible. We had to remain responsible to Paul. Which meant these craftsmen were comfortable using the material but the slightly different approach or scale or surface took them out of their comfort zone; although once they were in that zone, they were back in comfort because they know their materials.”

Materials were chosen for their longevity – such as concrete, aluminium, and a robust satin polished plaster known as ‘titanium concrete’ for a high-polish finish for the walls and floors – while local craftsmen produced the hotel’s custom timber joinery and furniture.

“We didn’t want to stylise,” Ashmore explains. “What we wanted to do was try to create a building that had this more modernist approach, which was about framing and engaging more with the nature and the climate. When I stayed there, it was the first time I ever felt calm in my own building. Because usually architects don’t,” Ashmore laughs. “I felt that the building was settled, and it felt pure – it didn’t shout at you, and it didn’t try to impress you – it just felt of [its] place.”