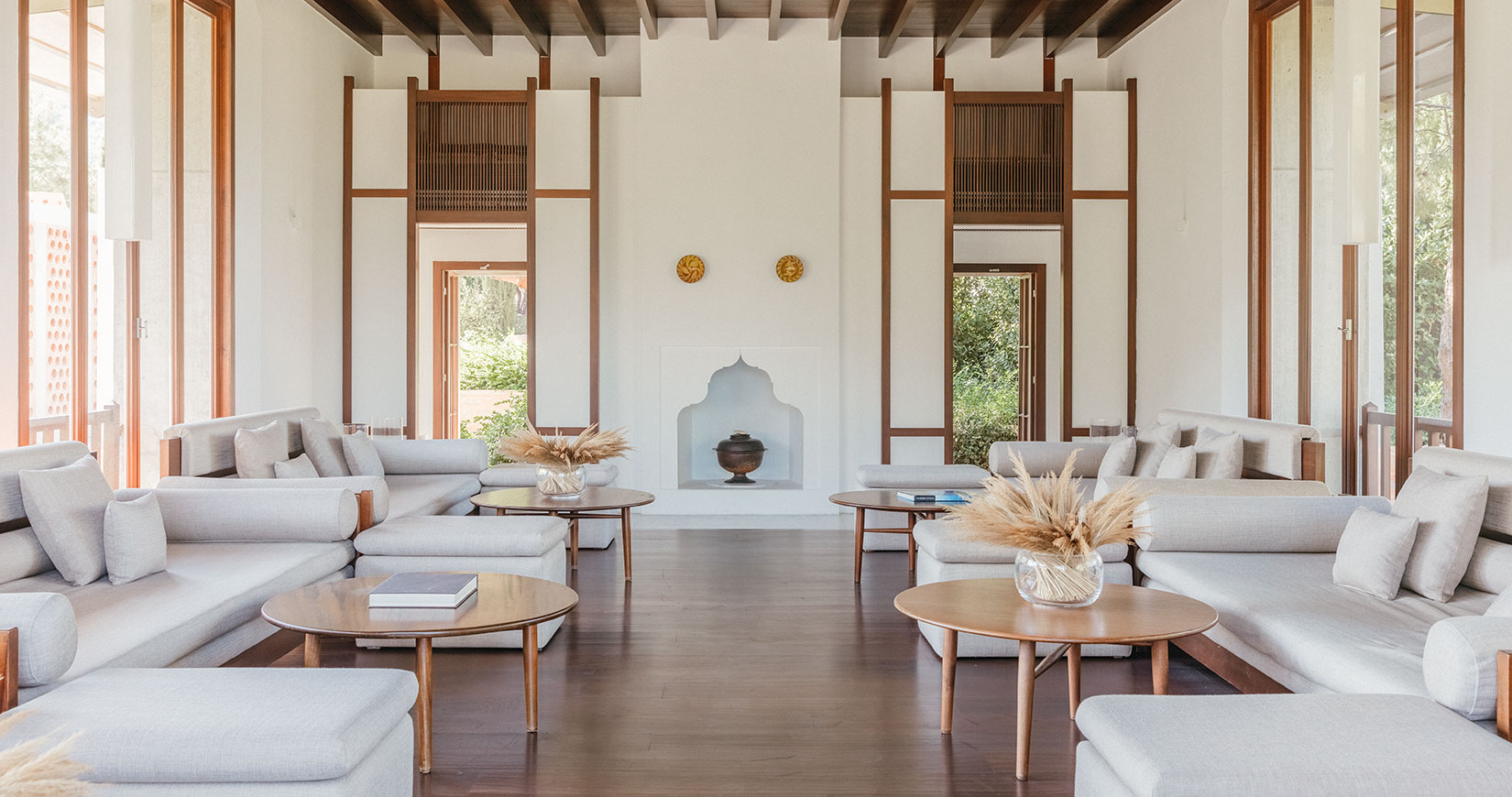 Amanruya borrows its essence from the convergence of the two words that make up its meaning: ‘aman’, named after the Sanskrit word for peace, and ‘ruya’, the Turkish word for ‘dream’. The idyllic hotel is located on the south-eastern Aegean coast of Turkey, on the northern coast of the Bodrum Peninsula in Mandalya Bay, and spans 60 acres of land surrounded by Mediterranean pine forests and ancient olive groves. Its hilltop location slopes down towards a private pebble beach, where a collection of pavilions inspired by the region’s traditional architecture sets the scene. Reminiscent of a village, the series of courtyards and terraces offers expansive sea vistas. 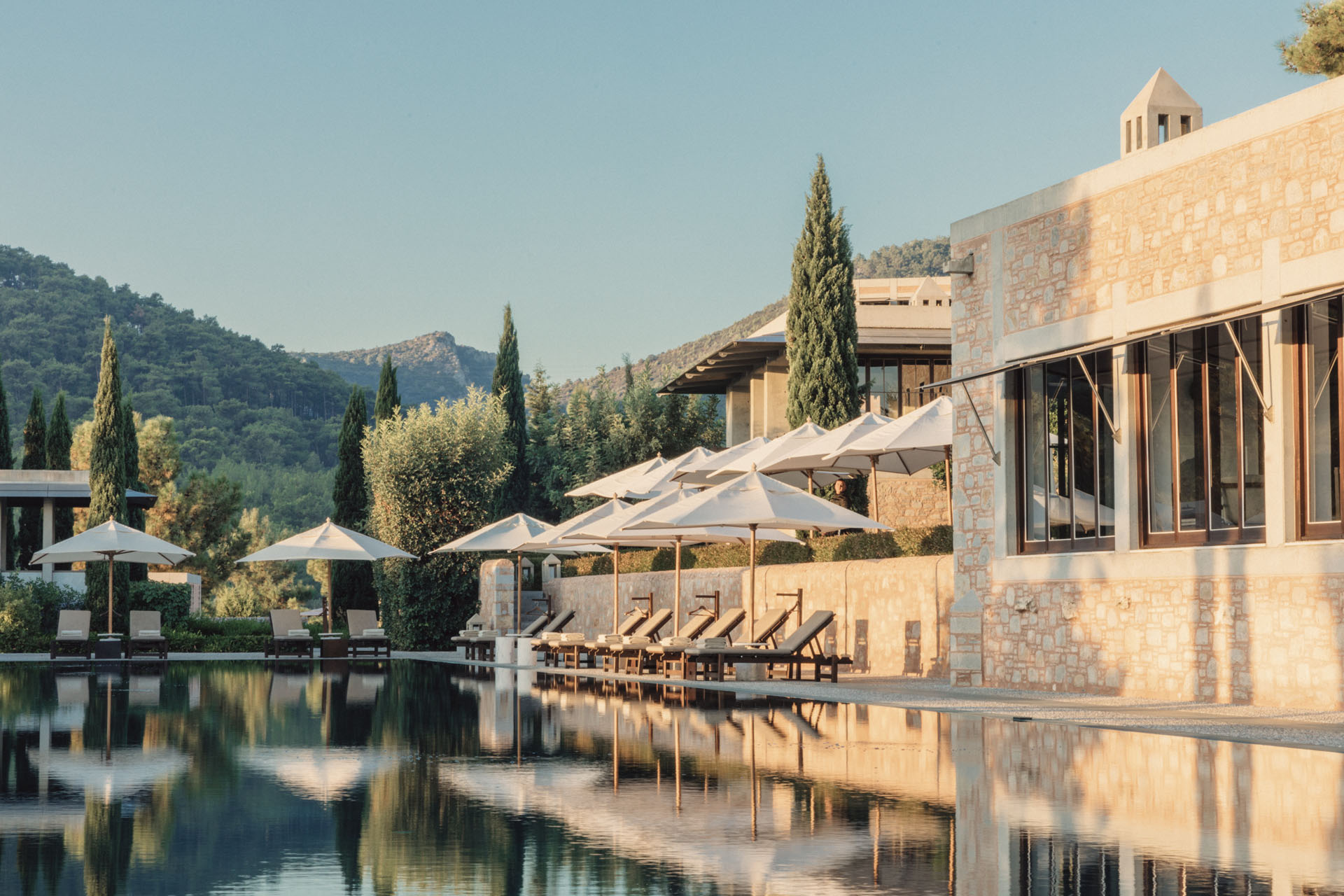 Amanruya’s architecture is a product of the vision of the late Turkish architect Turgut Cansever, who bought the land with his partners in 1970. He was awarded the prestigious Aga Khan Award for Architecture for a number of Demir Holiday Village Project houses that were built on the eastern side of the property in 1992. It was, however, Cansever’s daughter Emine – alongside her husband Mehmet Ogun – who realised the architect’s dream of creating a holiday resort together with Aman. 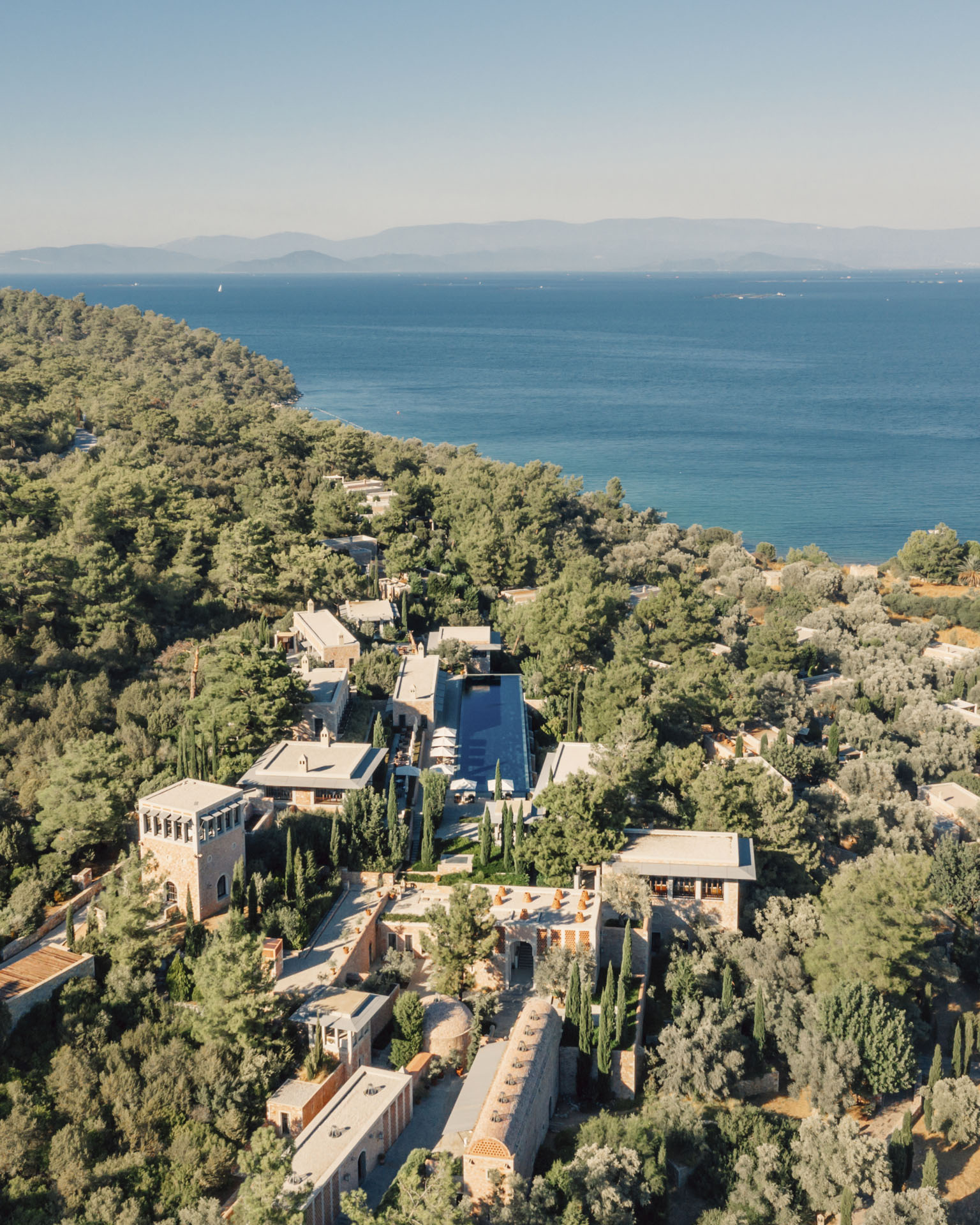 Embracing a vernacular approach based on traditional Turkish homes, the retreat comprises stone structures that flow from and into each other as the land dictates, creating an architecture that works together with its natural landscape while creating minimal impact, and which appears to rise organically from the red earth. Apart from the precast concrete pillars decorated in Cansever’s signature ornamentalism, everything in the property is made by hand. The village-like resort is modelled on a Mediterranean-cum-Ottoman patrician villa, with other architectural references embedded in the building techniques, together with vernacular expressions from the Hittite, Phrygian, Ionian, Roman and Byzantine eras, among others. “If a designer seeks a solution that belongs to the place, then history is the logical place to start,” the designers say of its incorporation of Turkish design. The 36 stone cottages, made from local Bodrum Çilek stone, make up the guest rooms and offer private swimming pools made with diabaz granite, alongside terraces that are scented with thyme and shaded by olive trees. Each cottage features white marble floors, mahogany ceilings and white Mugla hamman-style bathrooms with skylights. The rooms also all feature Ottoman influences such as the Bursa arches joining the bathrooms and the bedrooms, which include four-poster canopies with ribbed wooden detailing. During the cooler months, the rooms are warmed by Turkish mangal charcoal fireplaces, similar to those found in the Topkapi Palace in Istanbul. All the in-room furniture is designed and produced by Gaya of Bali – a nod to Aman’s properties across the globe. White-washed surfaces and the white Mugla marble are contrasted with dark wood ceilings in the lounges and dining rooms of the hotel, adorned with structural wooden pillars typical of traditional joinery that dates back to Anatolia in the 13th and 14th centuries. All the resort buildings are free-standing, to create a sense of privacy without losing the sense of community that is at the heart of all Aman properties. 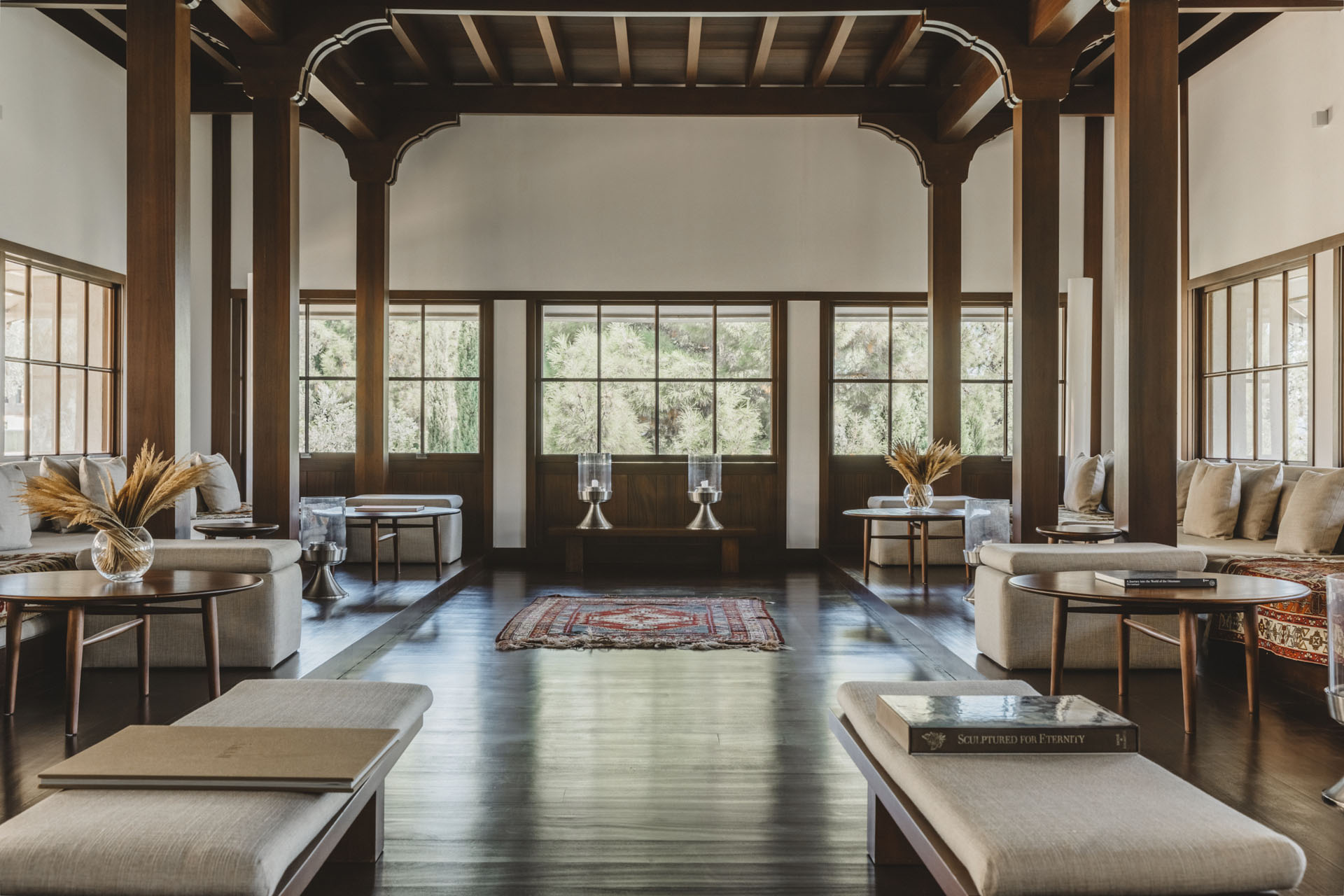 Traditional Anatolian architecture is also the inspiration behind the resort’s entrance, which includes a three-storey, free-standing library featuring a lounge on the top floor, with floor-to-ceiling windows that overlook the ocean on one side and the pine forests on the other. Pebble-edged steps lead from the library to the Boutique, where one can immerse oneself in local crafts. The Carpet Gallery next door is housed within a hand-built, beehive-shaped brick cistern, traditionally used to conserve rainwater. This leads to the Art Gallery, which features white walls and two decorative medallions of Brazilian stone hanging on either side of its high walls. 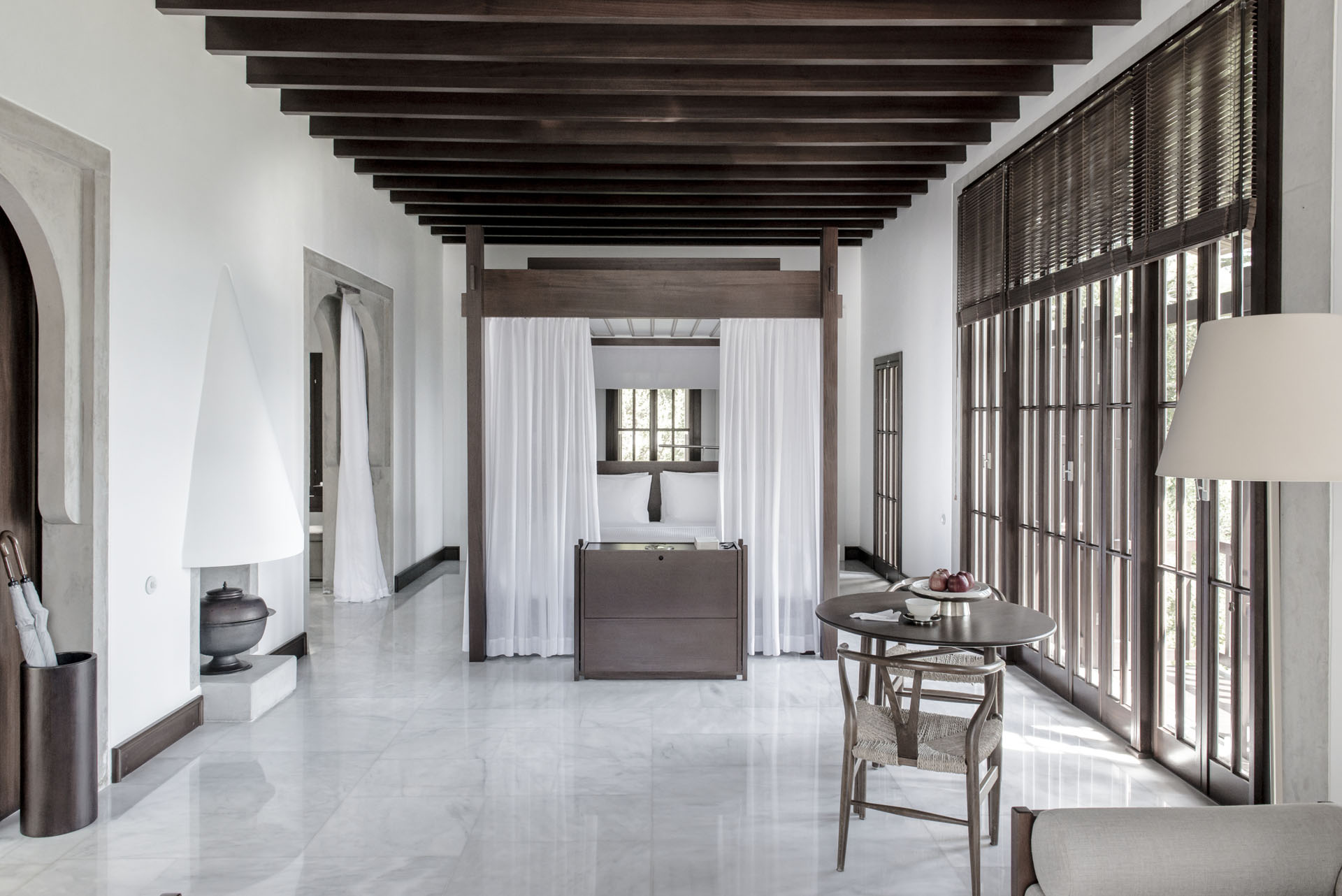 The property’s 50-metre infinity pool is made of green marble from Antalya in the south of Turkey, merging with the colour of the Aegean Sea – and is surrounded by four Dining Pavilions. 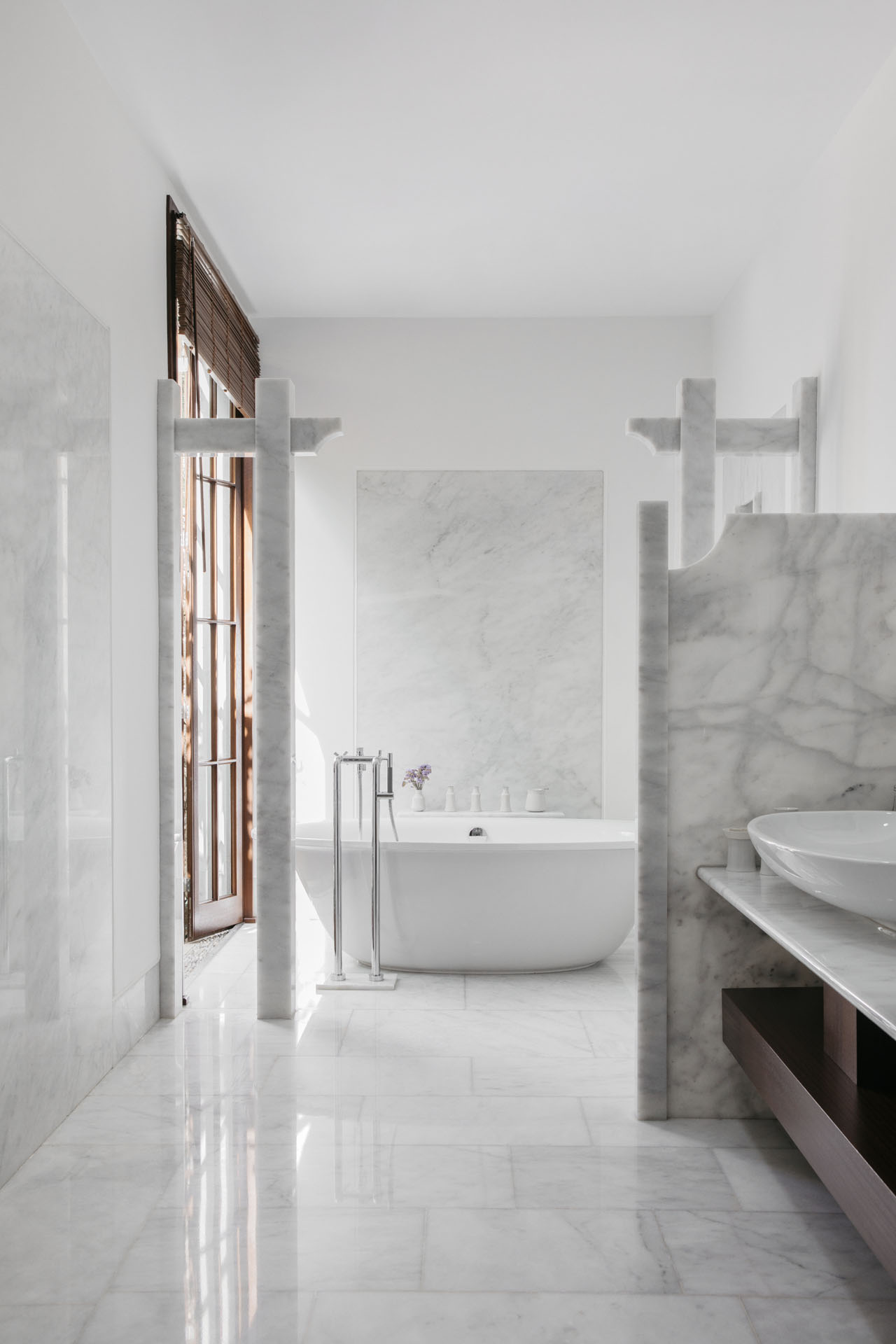 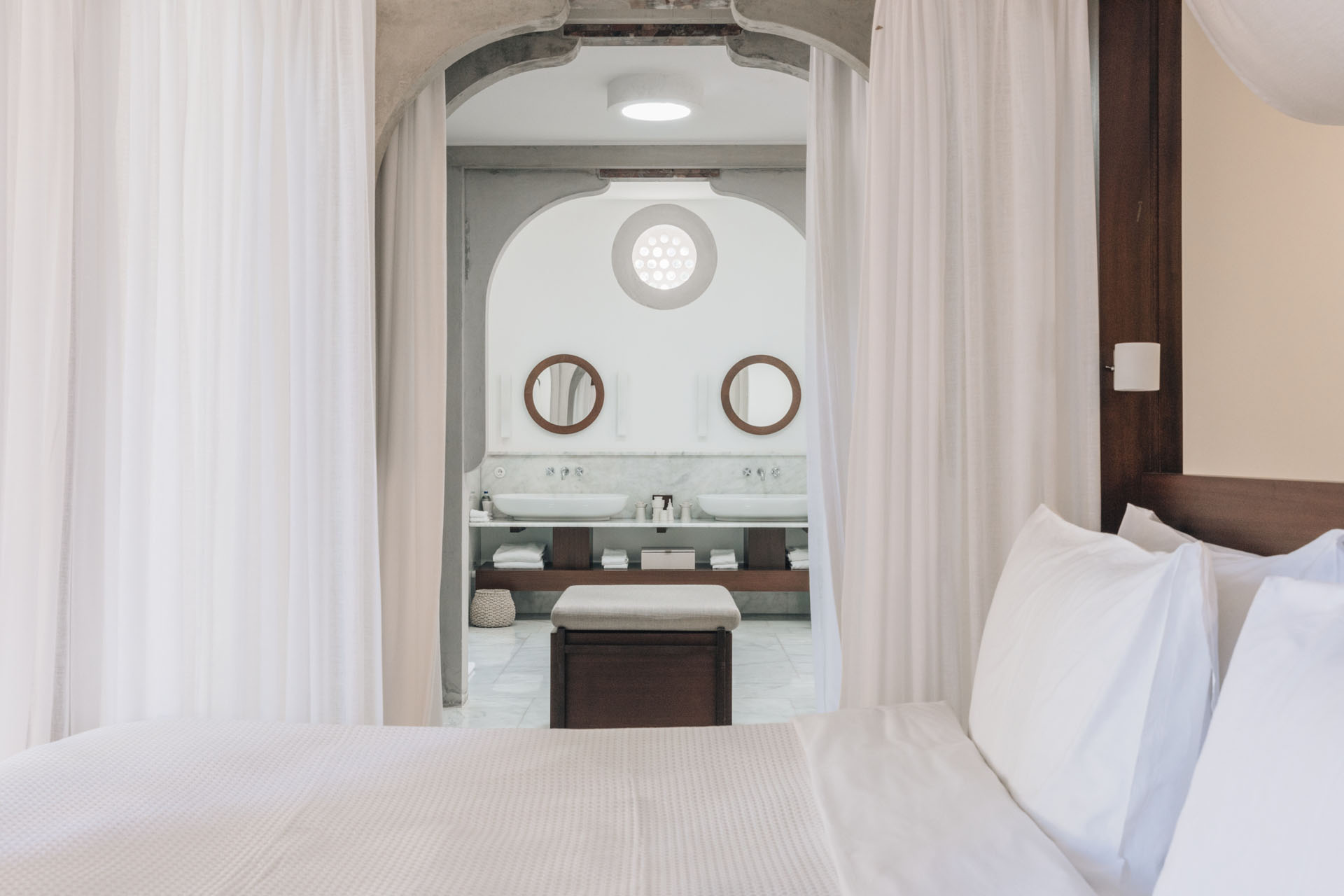 Local building and craftsmanship are at the heart of Amanruya, with all stone and marble being locally sourced and cut, while other elements, such as the hand-laid cakil stone that defines the pathways and windowsills, are created by female artisans. Local builders have also created the stone walls that line the path leading to the guest cottages. 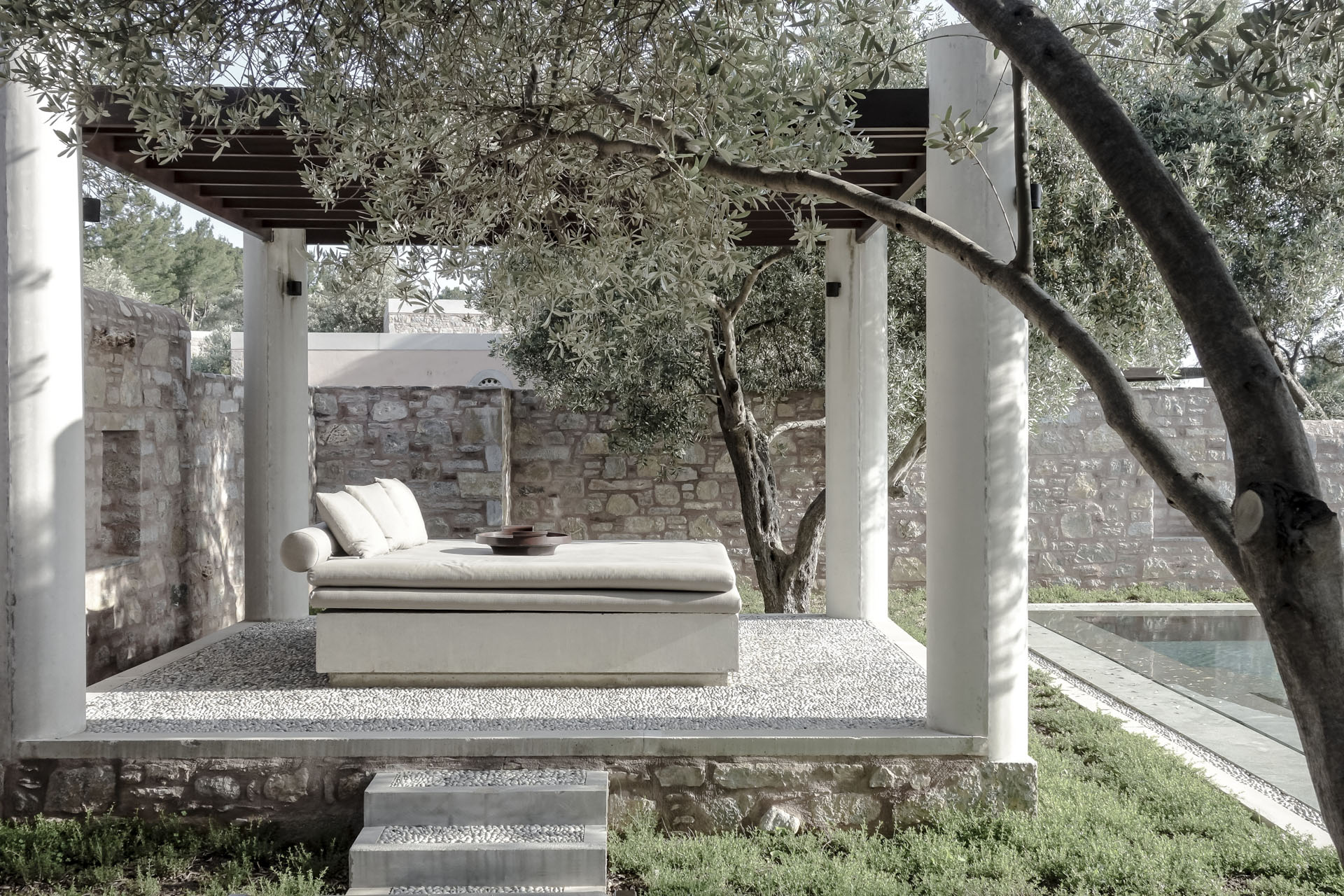 The elegant simplicity of white is carried out across the property, including its ‘Barbakan’ detailing which features design elements inspired by the traditional stone Kilis houses of southern Turkey, allowing the deflection of wind and rain while letting light into its internal spaces. Some of the buildings also feature awnings and other eaves, and the dark acajou wood, hand-carved by local craftspeople, spans the ceiling and soars upwards in fluted glass concertina doors. 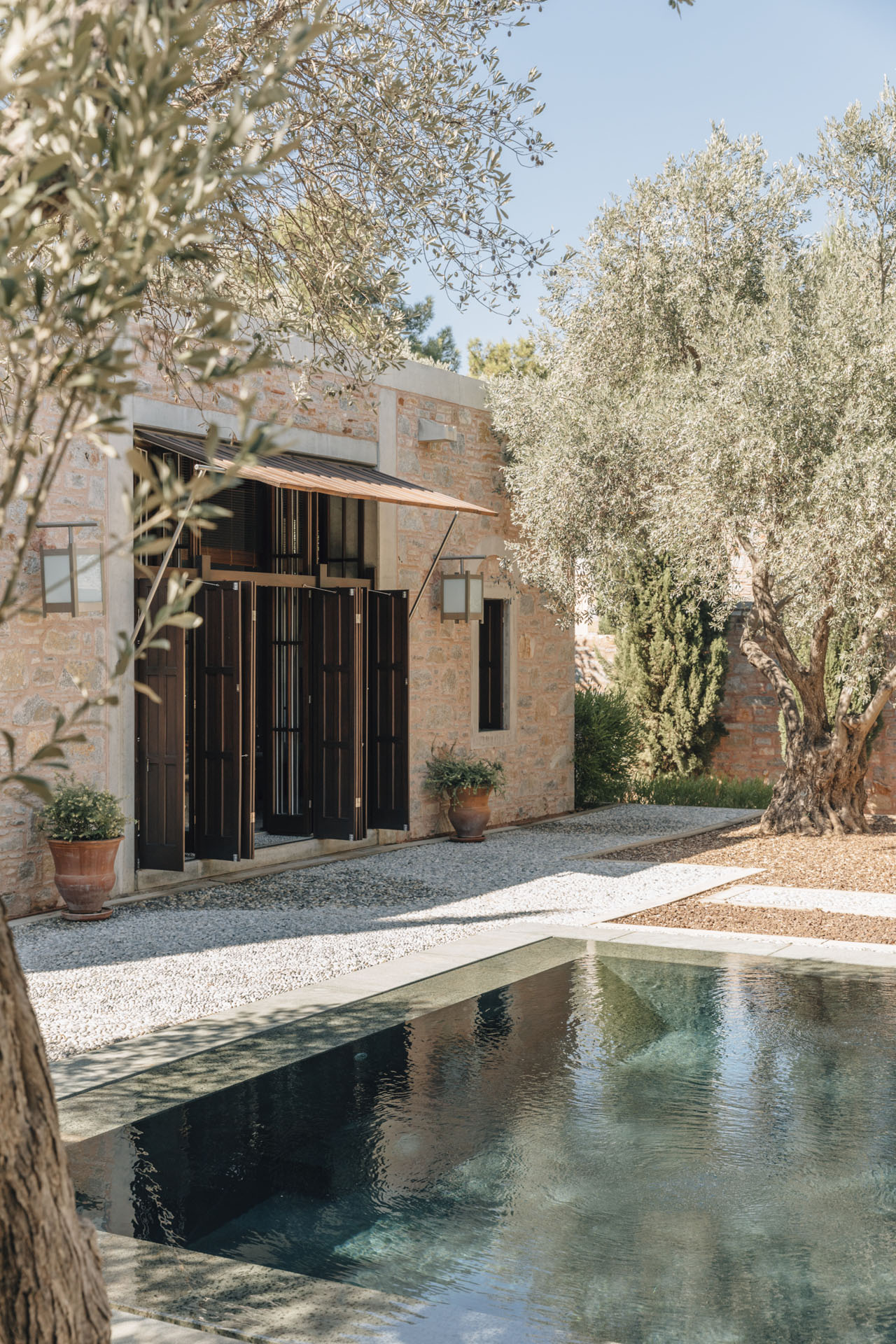 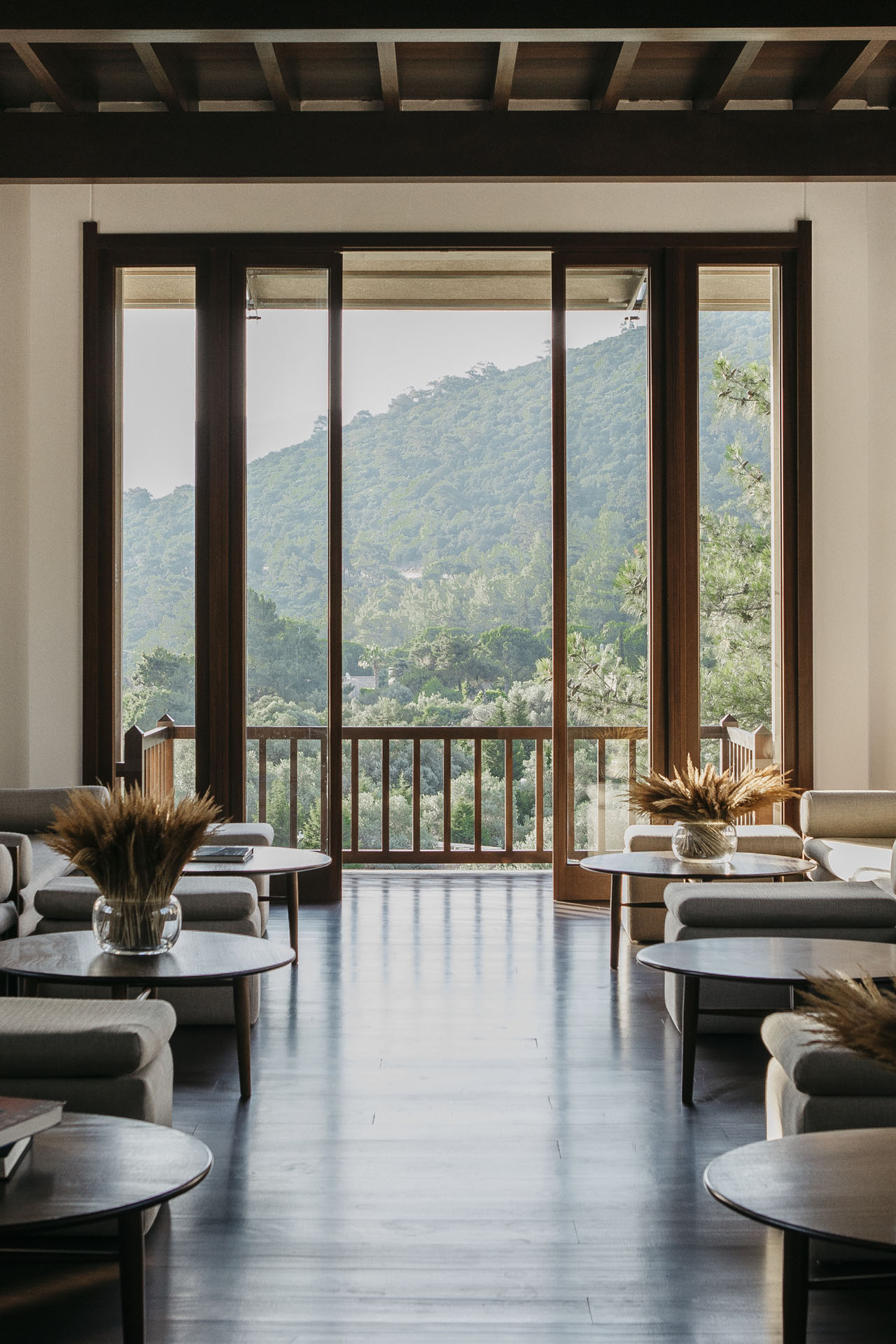 With an amalgamation of traditional architectural building techniques, contemporary interior design and a serene natural landscape, Amanruya is an intimate retreat that doesn’t fail to teach its guests of the region’s history while offering a sense of wellness and an appreciation of local culture and know-how.