North of Bondi, in the suburb of Dover Heights and overlooking the ocean, is this 825-square metre, two-level house that has everything anyone could ever dream of: peaceful outdoor areas on the ground floor (including a patio and garden with a swimming pool); exceptional views of the ocean from the balconies on the upper level; a sense of openness in all the main living spaces; and a balance between the different colours and materials throughout. Creating the perfect atmosphere with every element at the right place was, however, no easy feat. The brilliant mind behind this elegant and warm Sydney home designed for couple Portia and Jason (and their children) is Egyptian-Australian designer Yasmine Saleh Ghoniem, who leads YSG Studio. To start, some structural changes were necessary as the project originally was “a rabbit warren of tiny dark rooms and hallways”, according to Saleh Ghoniem. Several internal walls were removed, and the ceiling was raised in the kitchen/living area and the formal lounge room by the fireplace to enhance an airy flow. This area opens up to the terrace through folding doors, not only allowing for cross-ventilation but also inviting natural light inside. 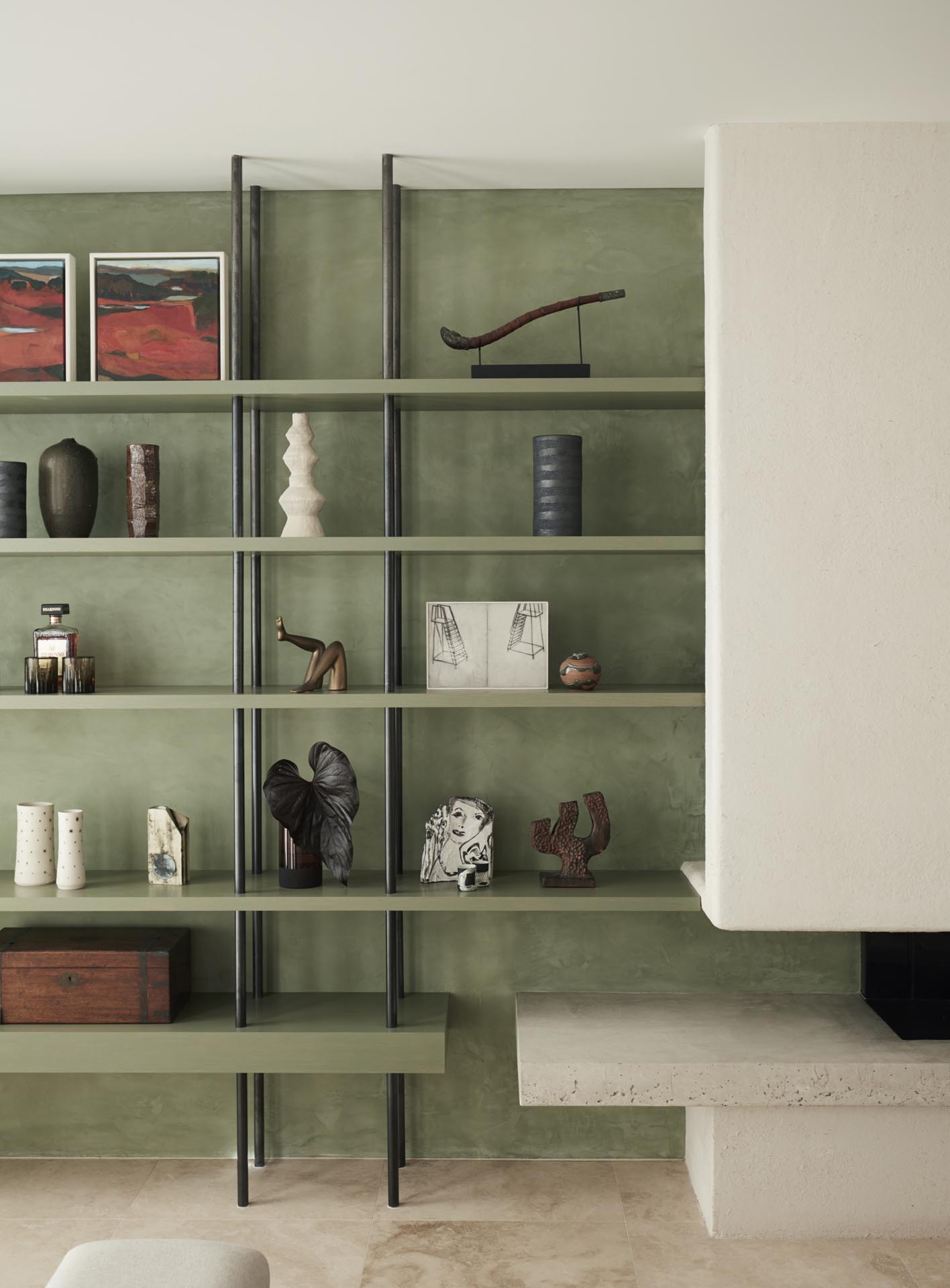 Outside, important transformations also took place. “The pool was reduced in size and re-surfaced (as its edge practically abutted the original connecting door to the house), enabling the entertaining area to sit within its deepened threshold, while the existing gazebo was transformed to include a dining setting plus outdoor kitchen,” Saleh Ghoniem describes. “The pool’s cabana and a side courtyard incorporating a seating alcove and concrete awning (an extension of the dining area’s blushing aubergine ceiling) converted under-utilised spaces into all-seasons rooms.” One of the main objectives of this project was to highlight the connection between inside and outside – something that was reinforced through the use of the same terracotta tiles in both the interior and exterior spaces of the ground floor. Meanwhile, the original travertine floor was preserved in several other parts of the house. The wall and ceiling lighting fixtures underline the deep hues in the public areas, where an arched opening, a curved wall and the fireplace with a space to sit down give a feeling of perfectly balanced proportions. “Settings are embellished by tonal and tactile variations that delineate the neutral zones via swathes of colour and surface patinas,” says Saleh Ghoniem, who chose the smooth sage and toffee Marmorino polished plaster walls, the blushing aubergine ceilings in the formal lounge and dining areas, and the nubby carpets found throughout the home. “This home is an immersive dreamscape that envelops you the moment you enter, and instantly quietens your mind.” 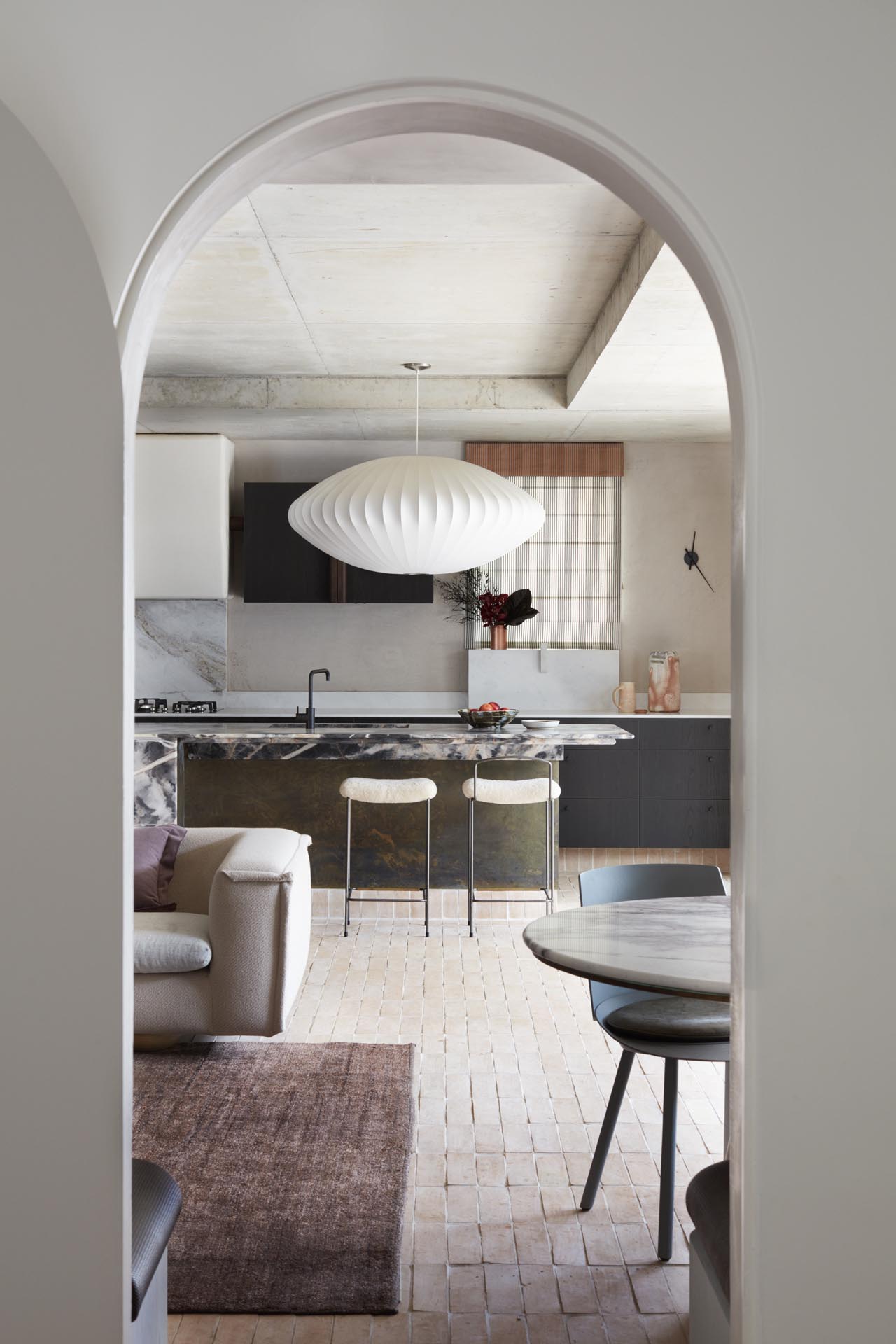 Hovering within the entrance of the home, the painting by French-Australian artist Stanislas Piechaczek featuring dusty pastel shades, patchy brushstrokes and experimentation with conceptual depth informed much of the interior. “It was the first artwork the couple purchased together during a break in Byron Bay,” remembers Saleh Ghoniem. “Stanislas was doing a residency at Raes on Wategos, where they were staying. Jason had just proposed to Portia on the headland, so it’s very sentimental.” The interplay between polished and raw finishes is highlighted in the kitchen, where the marble island combines with brass, while the flooring features rustic tiles. Many pieces were made-to-measure and all of them were carefully selected for every corner, such as the Utrecht armchair by Gerrit Thomas Rietveld for Cassina, the sculpture by Sanné Mestrom and the Mantis floor lamp by Bernard Schottlander for DCW Éditions in the living room. Dedicated mostly to private areas, the upper floor is home to four of the property’s five bedrooms, including the two main bedrooms. One of them was designed for him and has deep eucalypt green decorative elements in the bedroom and black marble in the bathroom; the other was created for her, with powdery plum tones in the bedroom and rose-shaded marble with black veining in the bathroom. “Given the seaside location, natural aging is celebrated, providing the home with a ‘lived-in’ ambience that complements the family’s relaxed lifestyle and preference for casual daytime entertaining,” Saleh Ghoniem says. “Every day feels like the weekend.” In this home, every detail plays a part, with a special ode to materiality thanks to the rich colour palette, sculptural forms and textures that give life to a fresh and refined aesthetic, making this Australian coastal house a tactile paradise.