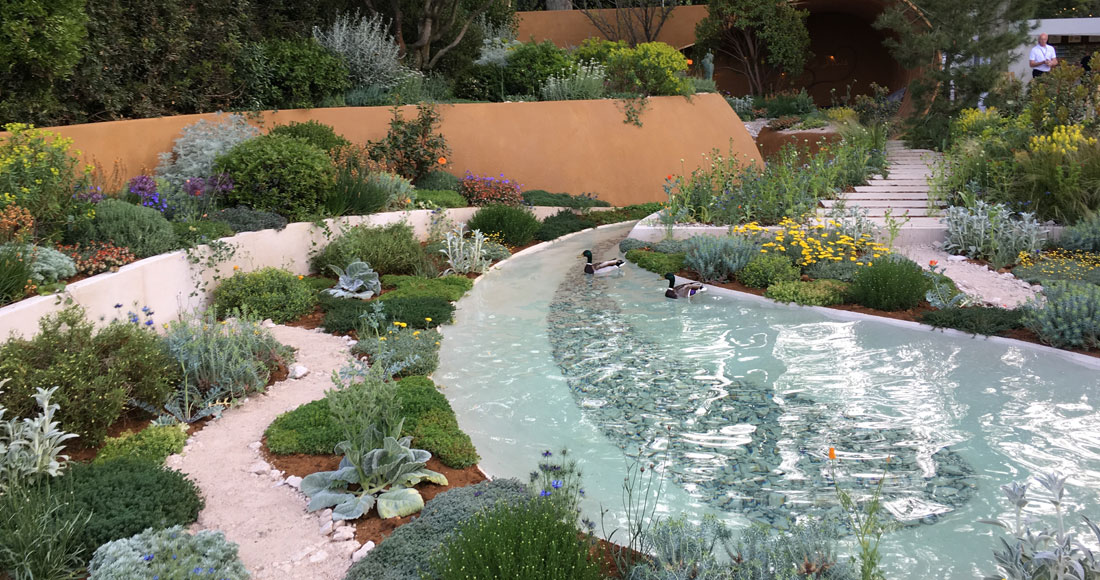 The so-called ‘Oscars of the gardening world’ take place this week, 21 to 25 May, at RHS Chelsea Flower Show in London, where eleven top designers compete in creating impressive show gardens. Each are different yet valid – whether Tom Dixon’s democratic garden design for Ikea, Andy Sturgeon’s garden inspired by rock formations on an Australian beach, or Sarah Eberle’s Resilience Garden which explores how forests are faring in the face of climate change. In the line-up is The Dubai Majlis Garden by Thomas Hoblyn, which continues the Middle Eastern presence at the show, started by HH Sheikh Zayed who loved gardens and worked closely with landscape designer Christopher Bradley-Hole. His innovative Garden from the Desert (2003) won a gold medal, while Hortus Conclusus, or enclosed flower garden, in 2004 gained the extra award of Best Show Garden. In the Grove (2005) was built in memory of the Sheikh, who did so much to bring the gardening style of the Middle East to a wider audience. 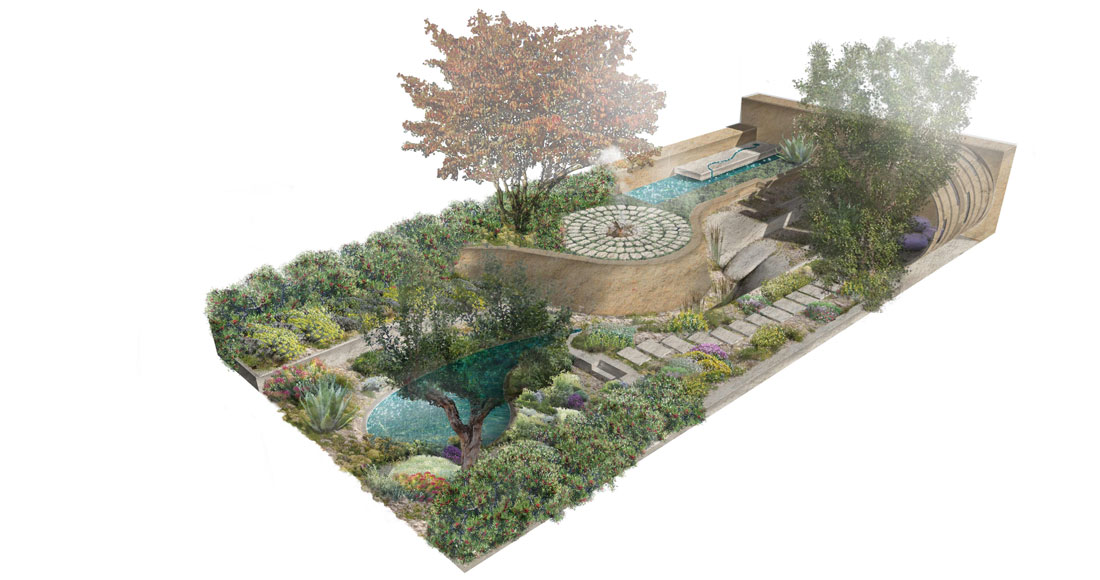 “As a student at the Royal Botanic Gardens, Kew, I was privileged to work on the gardens of Sheikh Zayed at Chelsea,” says Hoblyn. “One of Sheikh Zayed’s designers, Christopher Bradley-Hole was also my lecturer at Kew and so I have always been extremely aware of those wonderful creations.” It’s a neat and fortuitous link, and Hoblyn’s garden is inspired by the sculptural beauty found in arid landscapes – from windblown sand dunes and eroded rocks to man-made terraces with topiary-like planting. 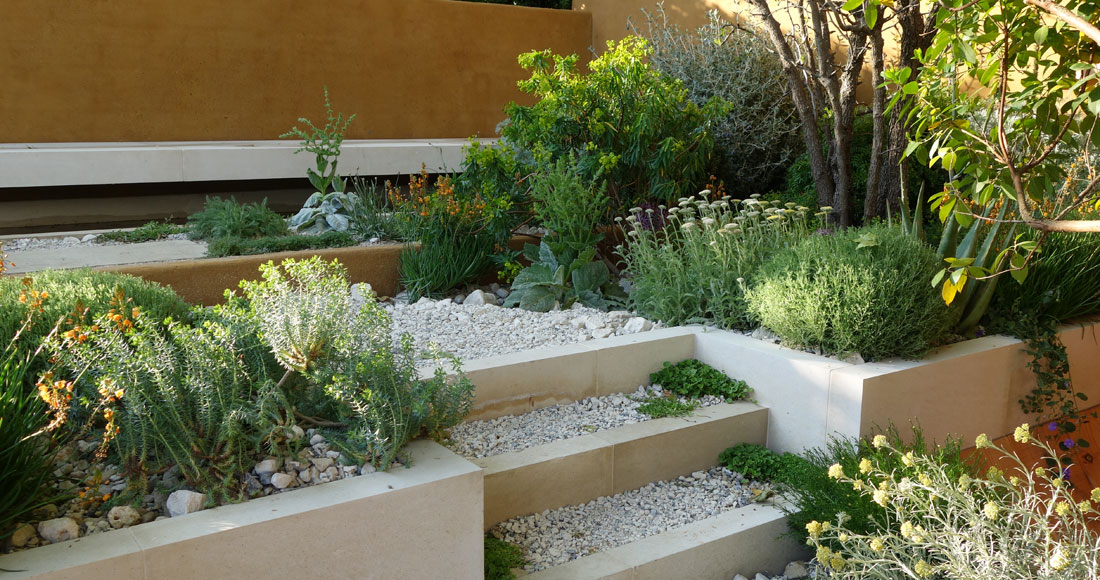 His show garden comprises three main elements: a sand dune-inspired pavilion that provides a contemplative space for people to meet; a water source connecting to an oasis-like pool; and a garden evoking a Middle Eastern feel, with white limestone and gravel mimicking eroded rock in arid locations. Says Hoblyn, “Researching the meaning behind the majlis gave me lots of ideas – especially [around] using nature-inspired metaphors to provide guidance for the users of the majlis; water finding its way around obstacles, and plants adapting to hostile environments, etc. I sculpted the terrain in clay as a direct response to the geological beauty found in arid landscapes.”

The highlight for Hoblyn was creating the pavilion: “Our majlis pavilion was created by steam-bending eleven-metre pieces of timber – something that has never been achieved anywhere before. Though fraught with worry, this was certainly the most interesting process. Sourcing plants has been fun; travelling to small nurseries around Europe trying to find species to complete our planting palette. I chose plants from all over the world that would be capable of growing in an arid landscape. Therefore there is a diverse palette that could be used wherever they live, within reason. Recent climate change has opened up the possibility of pushing the boundaries of where these plants can grow.” 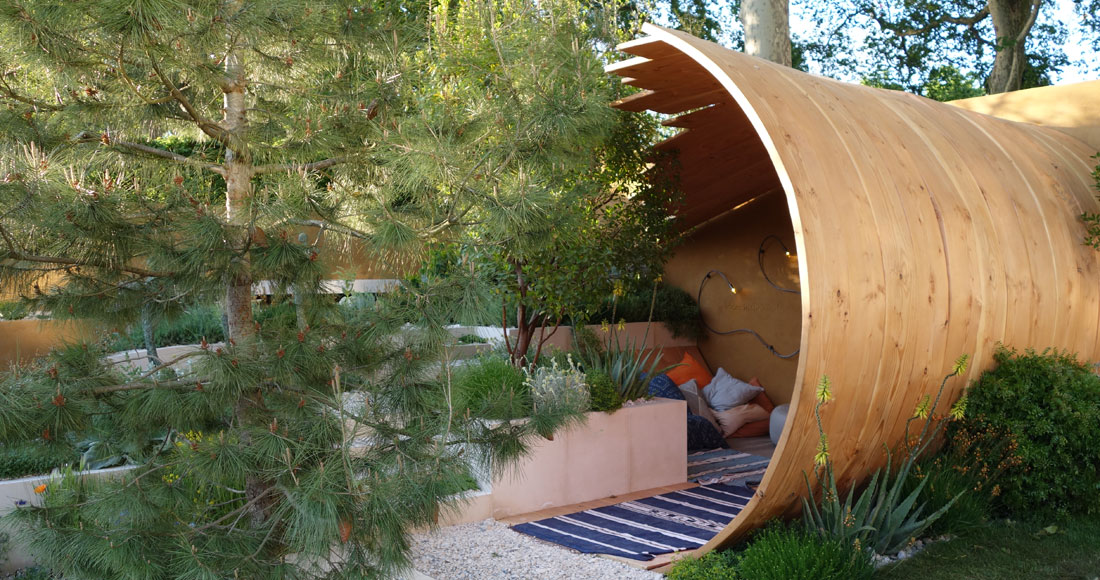 Hoblyn’s passion for gardening was ignited by his father, who gave him a small plot within the family vegetable garden. “It started with growing food and soon evolved into flowers from around the world.” His enthusiasm was developed by his uncle and aunt who had “ the most amazing garden perched on the side of a hill in South Devon. I spent much of my early years there and they were keen to impart their knowledge. It was my uncle who gave me a copy of The Well-Tempered Garden by Christopher Lloyd, and that really introduced me to the world of horticulture.”

Hoblyn follows in the footsteps Kamelia Bin Zaal, who in 2015 presented her serene Beauty of Islam garden, dedicated to Sheikh Zayed. It was a combination of poetry and calligraphy, matched by sculptural and meaningful planting against a backdrop of white marble, for which she won a Silver-Gilt medal. Reminiscing about the experience, she says: “The camaraderie during the show is amazing. I was so caught up in the process of the build and creating the garden, I even forgot about the medals. My main objective was to share the garden with the public. I wanted to change people’s perceptions about Islam and Arabic culture.” She achieved her mission and was touched by the public’s response. The international exposure has also led to other exciting competitions; “Chelsea got me invited to the Gardening World Cup in 2016, to design another Contemporary Islamic Garden: The Seal of the Prophet. I was just recently invited by Dubai Arts and Culture Authority and the Foundation for Islamic Culture in Spain, Funci, to discuss how Islamic architecture and landscape design can encourage tourism through [the] understanding [of] Islamic heritage. Also, I have been invited to the University of Illinois in September to discuss contemporary Islamic design.”Let’s hope Hoblyn’s impressive conceptual design will lead to similar success.  rhs.org.uk