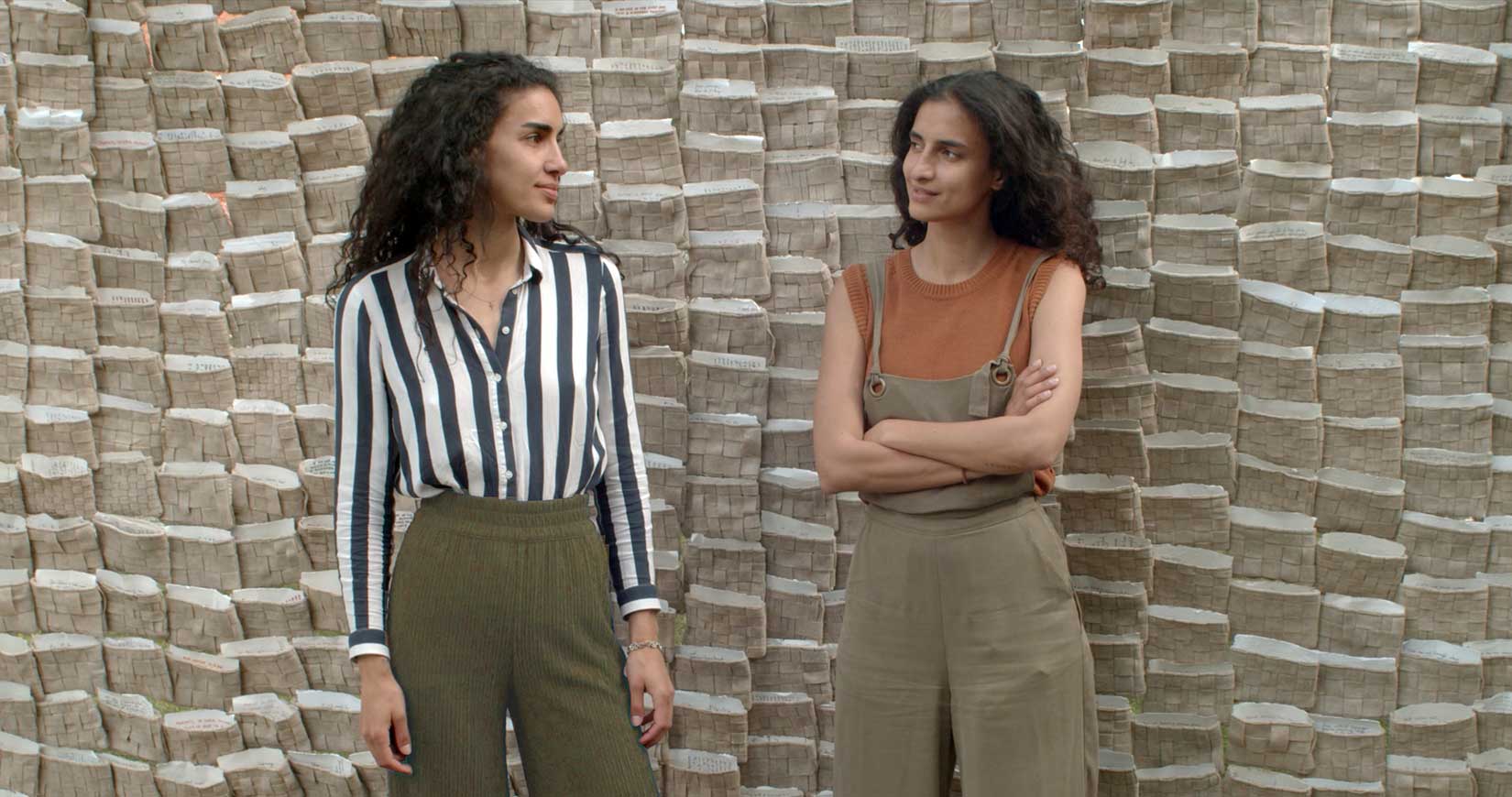 The voices of 2,000 Lebanese citizens have travelled to the Venice Architecture Biennale as part of Beirut-based architecture and design duo T SAKHI’s installation, ‘Letters from Beirut’. With the hope of fostering dialogue and honouring the Lebanese community, the installation shares narratives in the wake of the city’s ongoing reconstruction following the explosion in Beirut on 4 August last year. 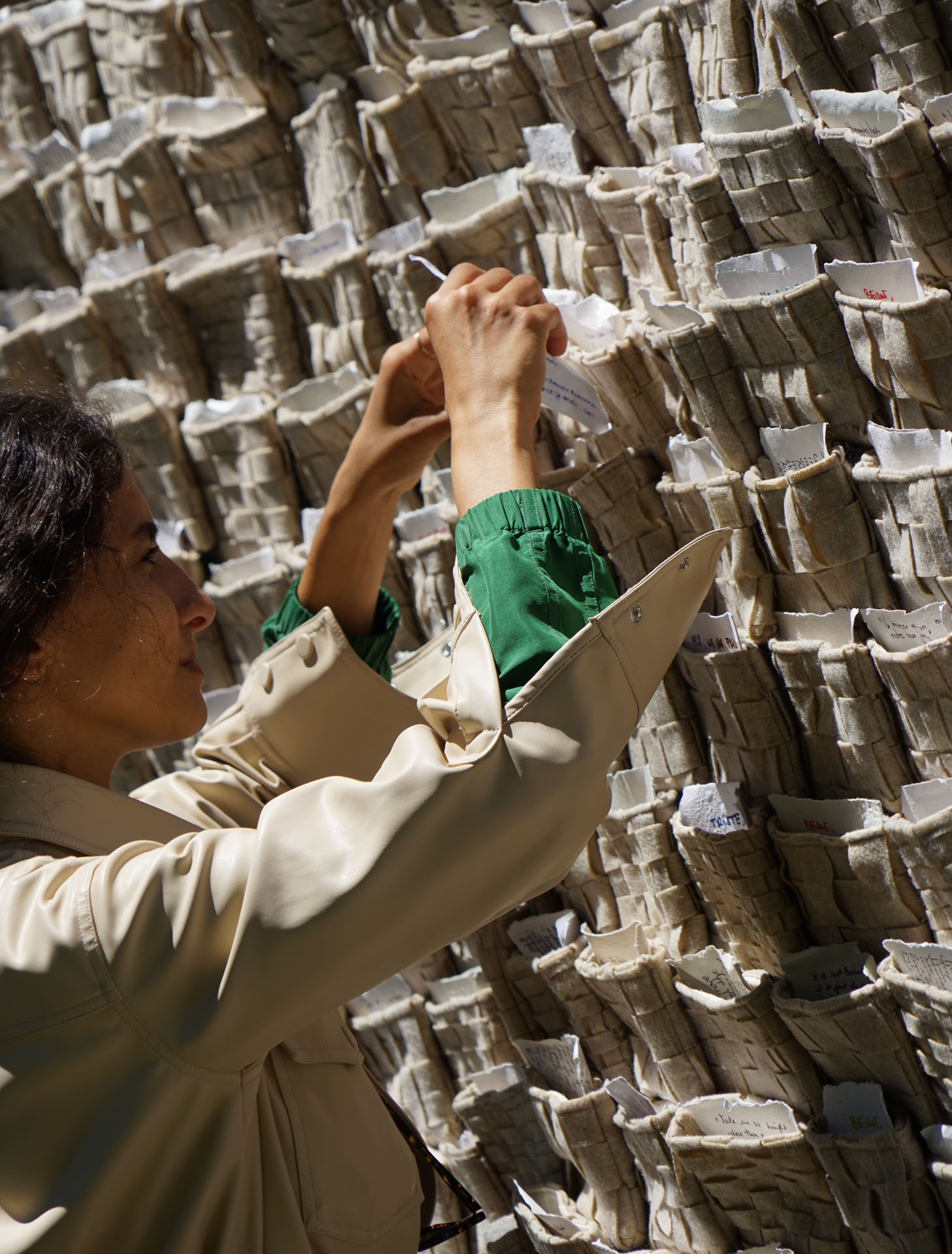 T SAKHI’s founders, Tessa and Tara Sakhi, collaborated with Sharjah-based Irthi Contemporary Crafts Council – a platform that preserves indigenous craft heritage by engaging women artisans through vocational training and upskilling programmes – to create a ‘handcrafted poetic project’. “[The project] immortalises the thoughts of Lebanese citizens during these tough and constructive times, and underlines the power of words through letter writing,” the designers explain. 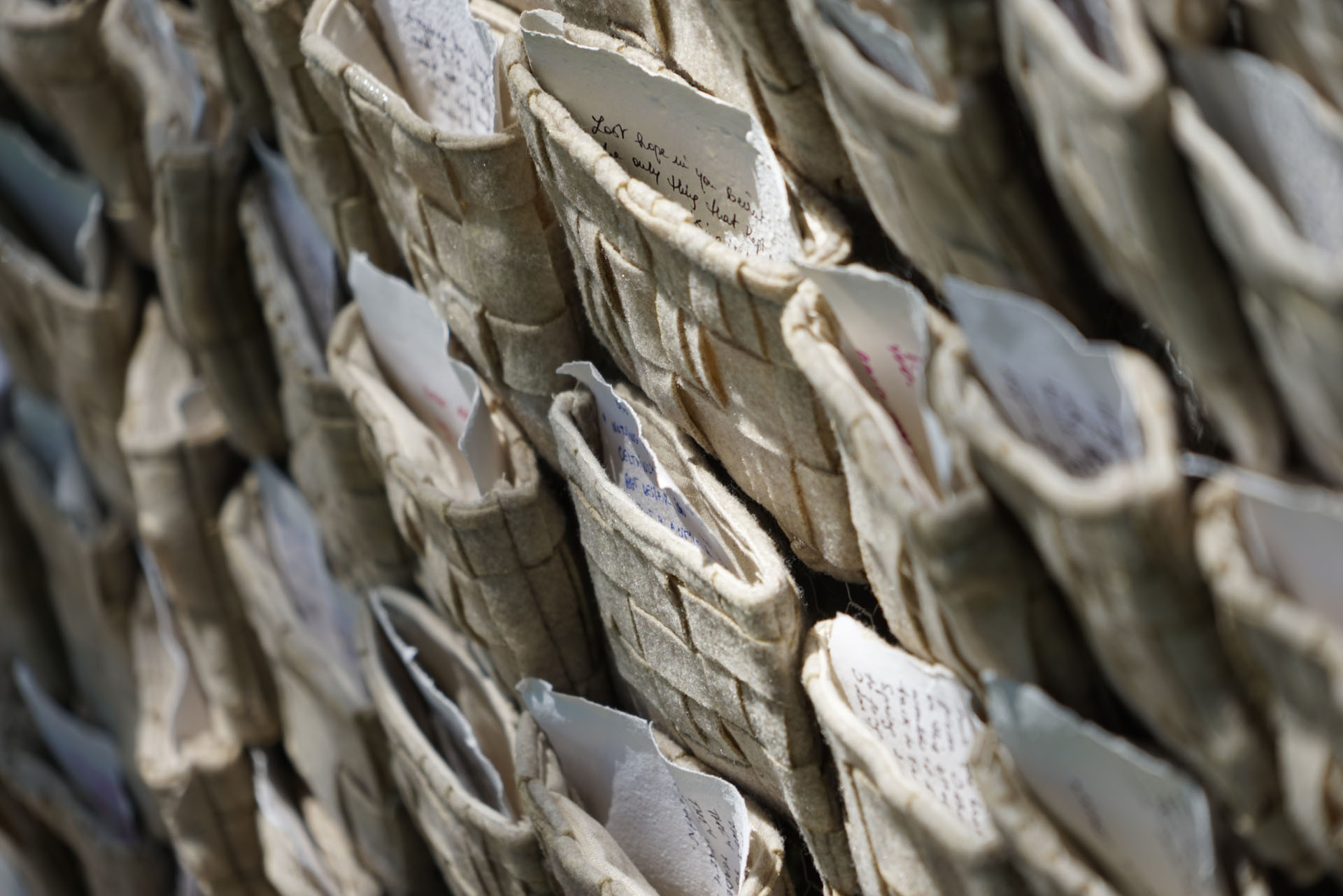 Comprising a six-metre linear wall that acts as a surface for contact and exchange, the project aims to engage pedestrians, who are encouraged to select one of the 4000 letters (which they are encouraged to respond back to), set inside handcrafted pouches that also contain a seed – a universal symbol of hope. As more people pick up a pouch, the walls of the installation begin to disappear, a metaphor that plays on the idea of barriers and barricades which can be overcome by human connection and interaction. 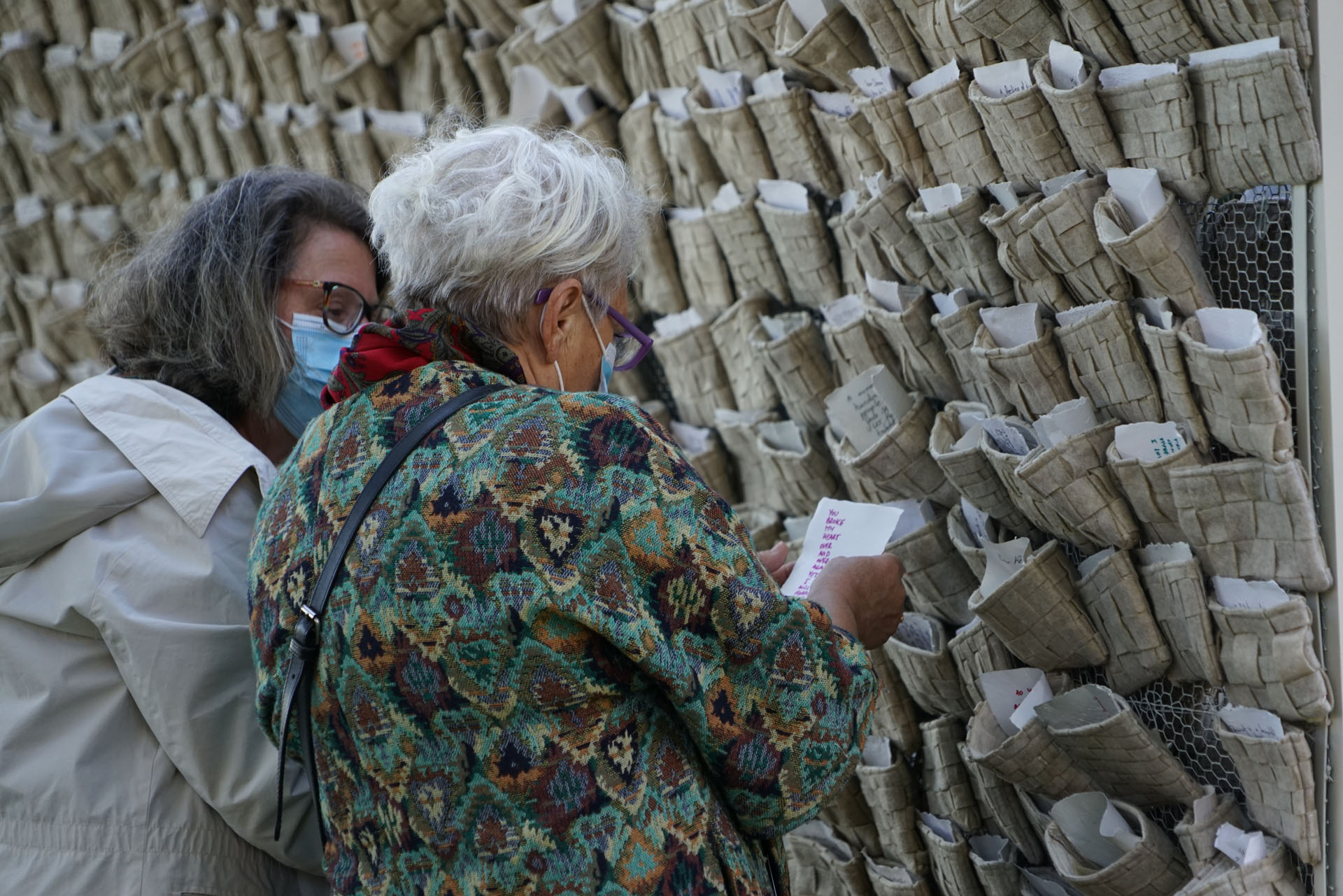 The pouches – which were donated by Irthi – have been handcrafted by 37 Emirati craftswomen from the Bidwa Social Development Programme in Sharjah, and are made from felt, stitched in silver Zari thread and lined with linen. The process incorporates a weaving technique inspired by one of the traditional hand-weaving patterns used in Safeefah, a traditional Emirati palm frond-weaving craft that uses techniques similar to basket-making. In this project, the artisans created a contemporary pattern for the felt pouches, inspired by the Sayr Yaay technique, replacing palm fronds with recycled felt.

The handmade paper was created by university students Mariam Abdulkarim, Amal Al Hammadi and Zainab Adel as part of their graduation project, using recycled paper. The seeds included in each pouch are either coriander, courgette (zucchini) or green beans, which are all edible plants used in Lebanese cuisine. Each pouch is scented with a natural fragrance evocative of Lebanon’s flora: cedar, pine, genet, thyme or jasmine. 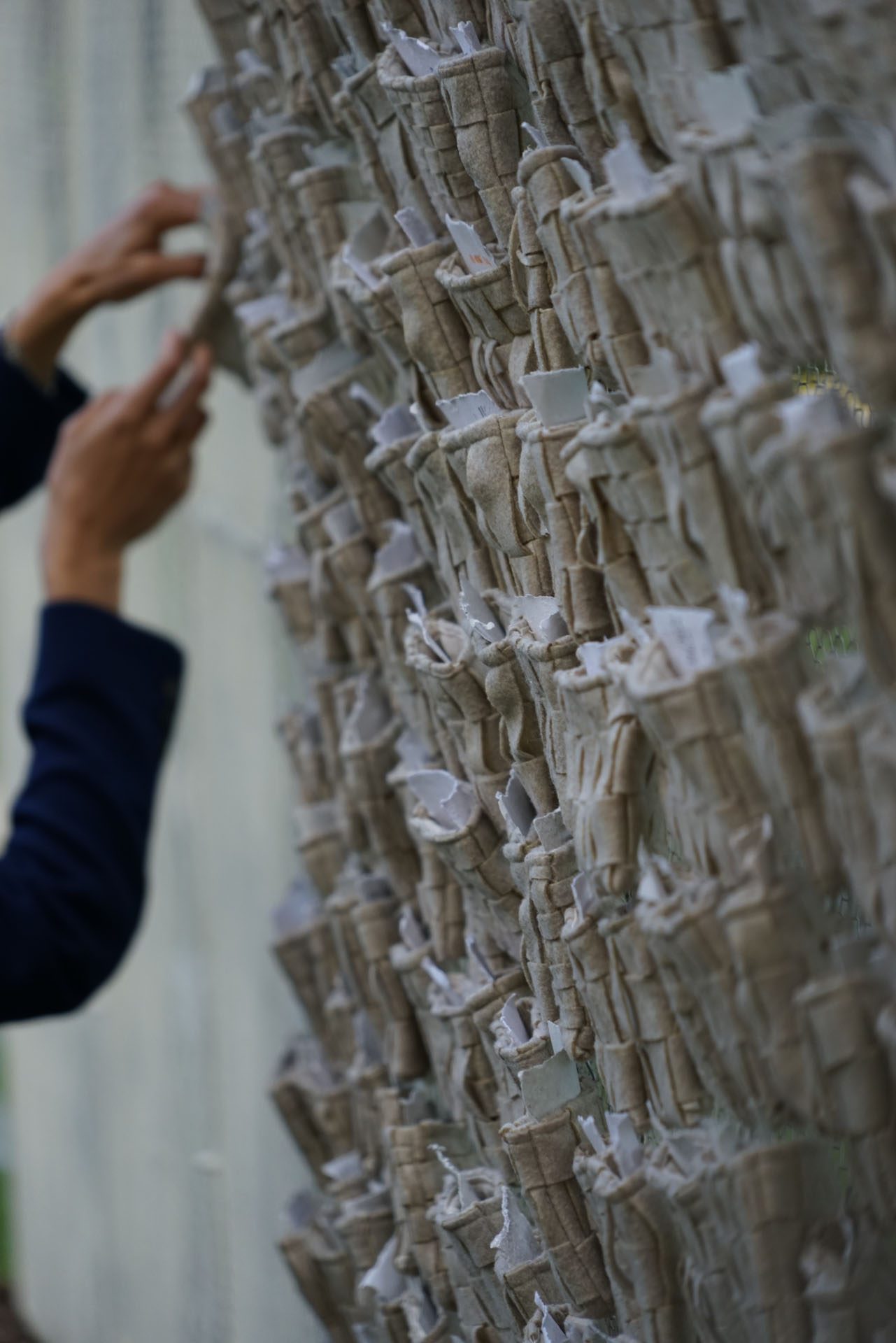 The project is also intended to raise charitable funds to support various sectors in the aftermath of the Beirut Blast, donating to NGOs including: the Bank to School Initiative by Arcenciel, which supports children’s education; the Beirut Heritage Initiative, which strives to restore and preserve Beirut’s architectural and cultural heritage; Beb w’ Shebbek, which has been rebuilding doors and windows of more than 80,000 destroyed homes after the explosion; and the Salam Beirut initiative by The Big Heart Foundation.

“We aim to continue the dialogue on the reconstruction of Lebanon’s future and the restoration of our collective memory,” conclude Tara and Tessa.