A harmony of influences collate in this Beirut apartment 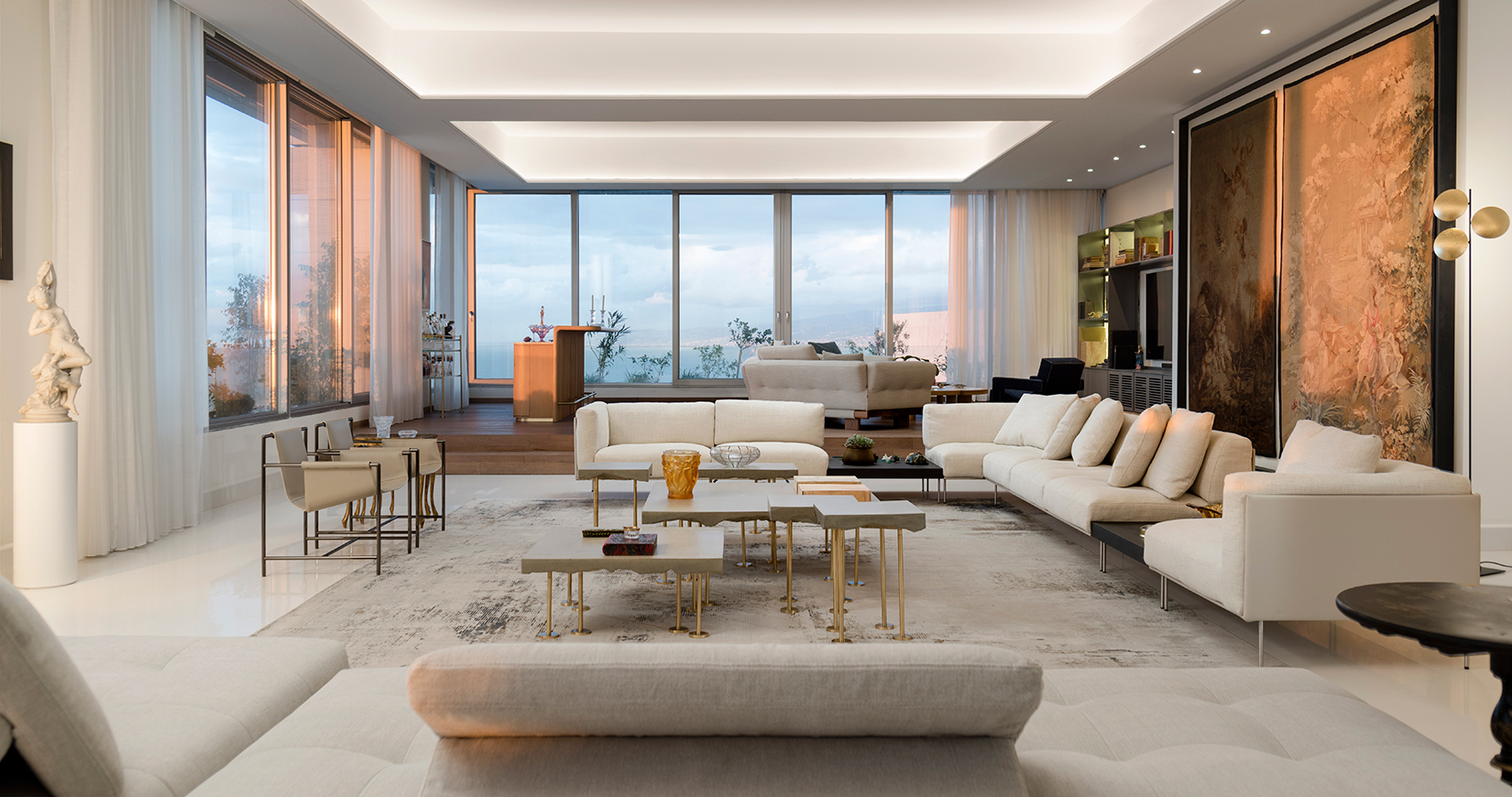 The devastating explosion of 4 August 2020, which transformed the skyline of Beirut, has revealed a spirit of determination in many Lebanese people. Some have committed to working on sites affected by the destruction in order to continue looking forward and build the future. Lebanese architect Karim Nader – who leads his eponymous studio – is one of them. He has taken care of redesigning a one-storey apartment, which is nestled on the 14th floor of Les Domes de Sursock contemporary tower in a high-end residential and cultural area close to the Sursock Museum, which is currently under restoration.

The ample views of the Port of Beirut, Achrafieh hill, the city beyond and the northern area toward Mount Sannine were among the starting points for Nader. However, the collection of antiques that the homeowners – a couple in their 50s with a daughter – wanted to highlight in a highly contemporary interior was just as important for the creative concept.

“The clients’ previous apartment in a nearby district was heavily damaged and they were eager to engage in an experimental process of design and object selection that would renew their whole lifestyle,” Nader recounts.

A Chinese buffet, Salvador Dali serigraphs, a Lalique vase and six Utamaro prints – to name only a few of the pieces in the collection – reflect the eclectic taste of the homeowners, which the architect chose to soften by selecting pieces in old golden hues with black, bronze and earthy tones to create visual coherence. “We also curated a very limited number of paintings by Lebanese and European masters, mostly reframed in simple white, black or grey frames,” Nader adds. “As for the contemporary furniture items, they were all selected to be in shades of white, off-white and light greys, in order to sharply complement the vintage items.”

Throughout the seven months it took to finalise the project, the idea of the complementarity and harmony created by merging highly ornate and complex pieces with simple and pure contemporary furniture and spaces guided every decision. The walls and ceilings were kept in pure white while the floor was adorned either in a slightly glossy white tile or in light wood, such as the parquet platform by the port side with the French oak bar by Thomas Trad.

This decor became the perfect backdrop for the Ming’s Heart armchairs by Shi-Chieh Lu for Poltrona Frau, the Rod sofa by Piero Lissoni for Living Divani, the Cab dining chairs by Mario Bellini for Cassina and the Jackie O chandelier by Enzo Catellani for Catellani&Smith, among others. Artworks by Paul Guiragossian, Jean Jansem, Sfeir, Kanaan and Abboud also adorn the different spaces, which comprise a generous reception area with a fireplace, a bar area/library, an ample dining room, kitchen and servicing areas, the parents’ bedroom, a yoga/massage room, the daughter’s bedroom, a guest bedroom and a family TV room. “The idea was to find the right balance between complexity and simplicity, order and disorder, texture and seamlessness, without overdoing any of them,” explains Nader.

The spirit of the place and of the objects gathered by the homeowners – from their families and their travels, and gifts from their friends – clearly inspired the narrative. “The role of the architect is to bring coherence to those fragments by reassembling the puzzle in a renewed and joyful balance,” Nader says. “A temple or a museum, an empty white room or an antique shop; it is at the middle-way between those polar contradictions (isn’t Beirut the mother of all contradictions?) that one finds the empty present moment to enjoy, breathe and be grateful of a new chance for life to express itself.”