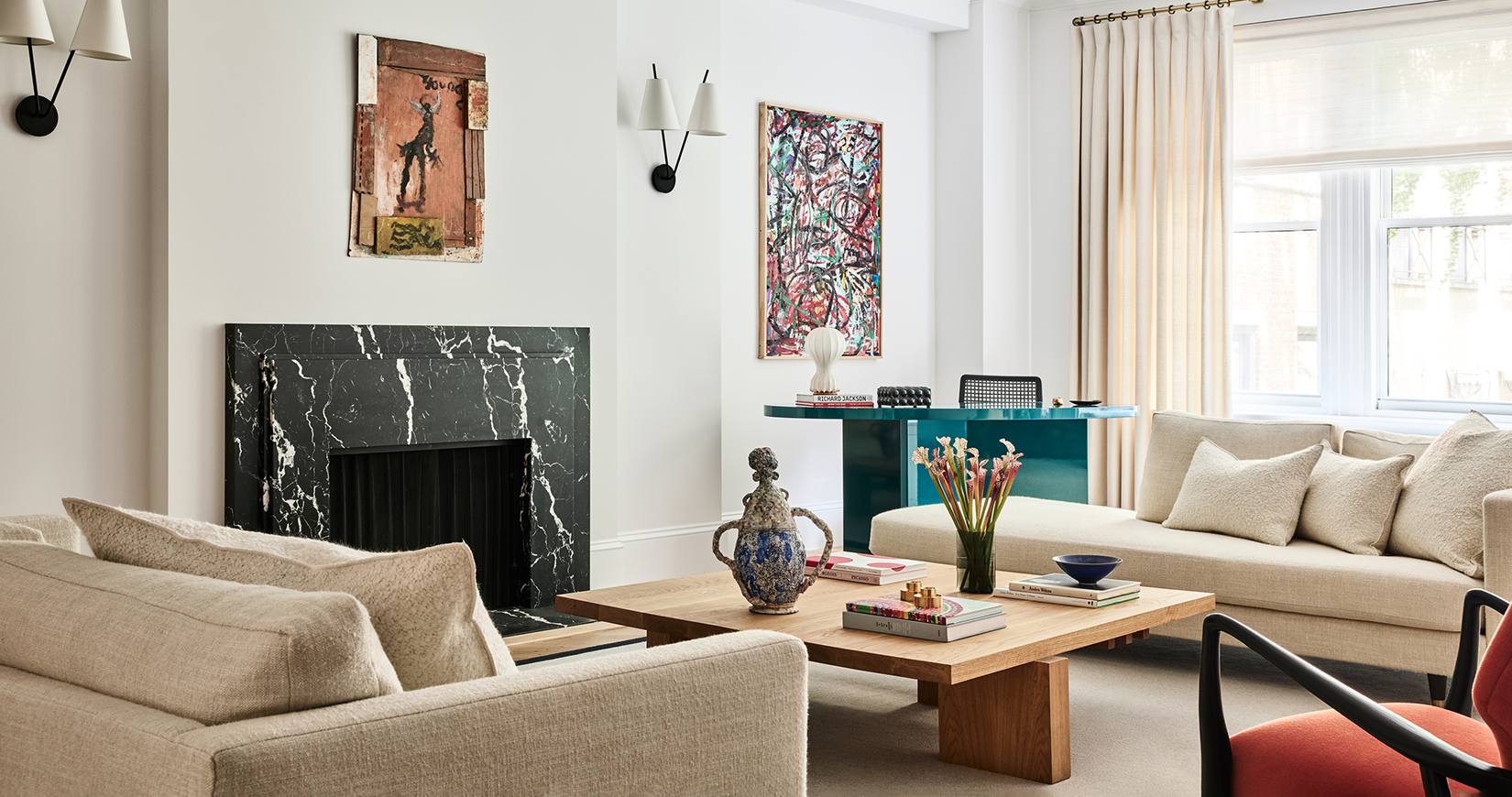 Michelle and Jason Rubell – from the family who owned the Rubell Museum in Miami – are used to life surrounded by art, and their New York City pied-à-terre is no exception.

The couple, who live in a contemporary home in Miami, fell in love with a building that dates back to 1927 and is situated on the Upper East Side, ideally located only a few steps from Central Park and the Frick Collection. For several months, the apartment was renovated by Edward Dew Architect while interior designer Monica Fried – at the helm of Monica Fried Design – took care of the typical large and free-flowing pre-war interior spaces, making them the ideal backdrop for the owners’ impressive art collection. 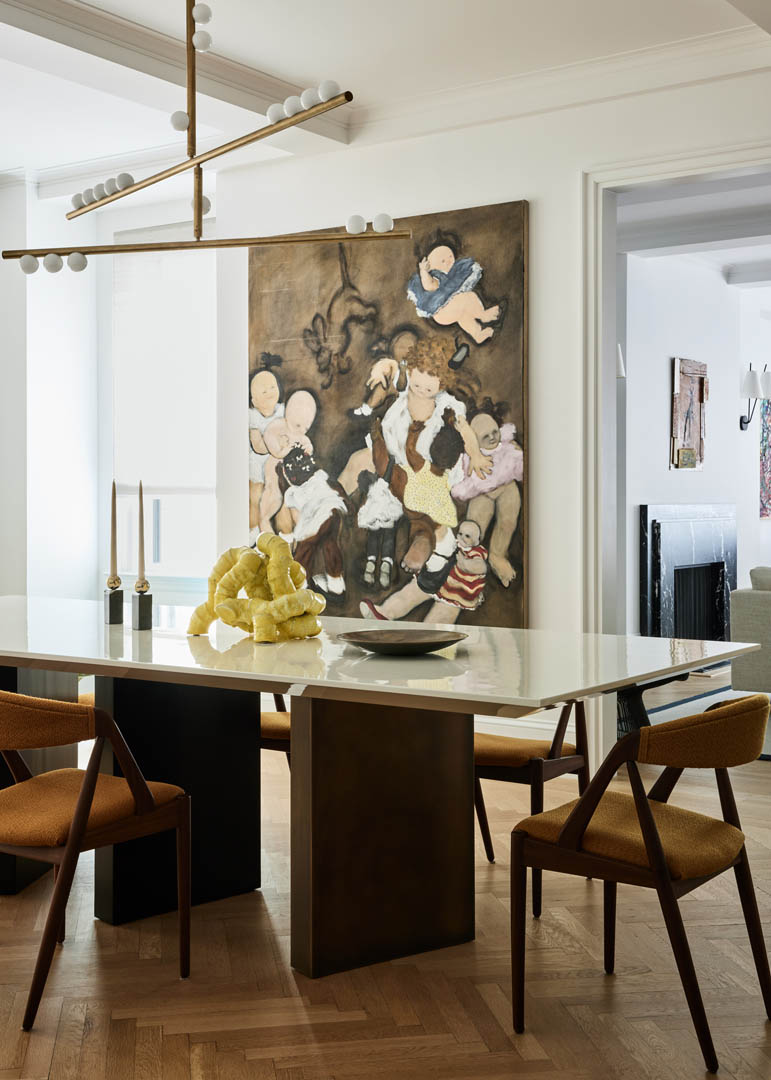 “Our aesthetic was really in sync,” remembers Fried, who worked on preserving the charm and old character of the home but also introduced contemporary touches and a relaxed atmosphere to the spaces.

“Our inspiration was Parisian chic – those French apartments that look effortlessly modern and classic at the same time,” says Fried. After stripping and refinishing the core of the space, the original oak parquet was preserved and brought back to life, now with a lighter tone. Most of the walls were painted in Benjamin Moore Chantilly Lace – a bright white that gives the feeling of being in a gallery – in order to highlight the artworks in every room. Still featuring a pre-war feel, the bathrooms were completely gutted and modernised, and the kitchen – adorned with an Apparatus pendant light and a Thomas Struth photograph, and furnished with Brazilian cane chairs and Thomas Hayes stools in mustard leather from Holland & Sherry – was opened up to connect with the rest of the spaces. 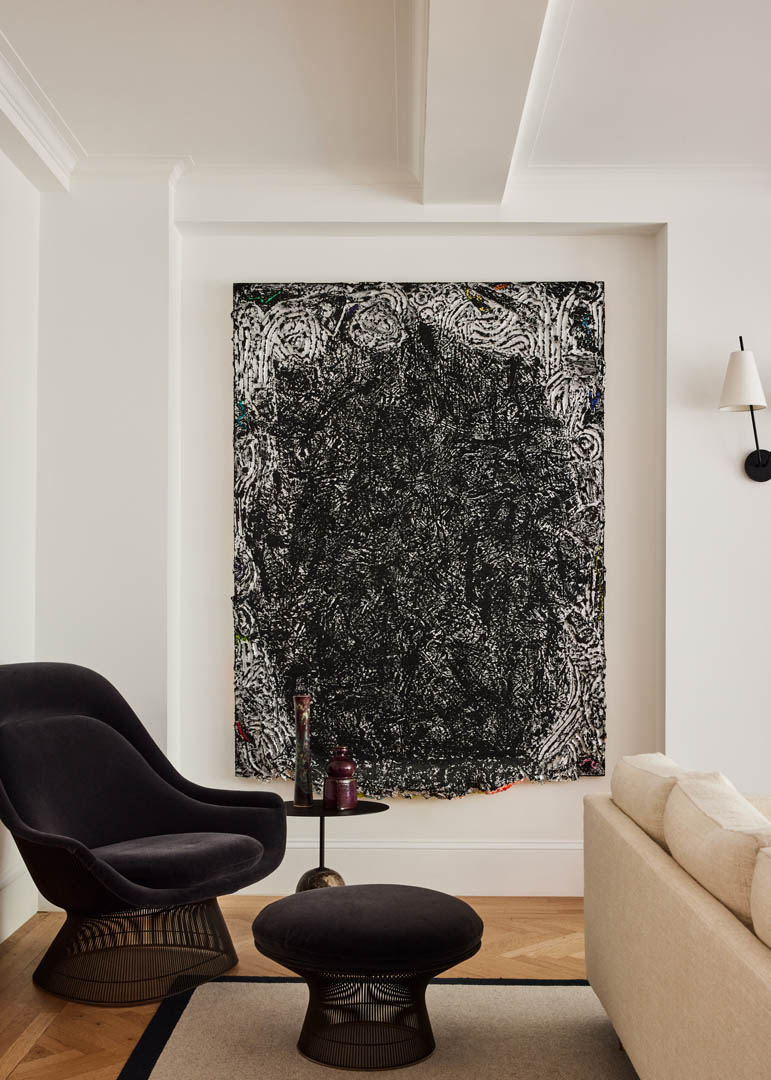 From the entrance, colourful pieces by Rudolf Stingel, Rashid Johnson and Sayre Gomez stand out and combine with Eric Schmitt pendant lights and a Jens Risom vintage bench. In the dining room, the Kai Kristiansen dining chairs upholstered in Maharam pumpkin wool, the Lindsey Adelman chandelier, India Mahdavi stools, curtains with Pierre Frey fabric and artworks by Kim Dingle and Martin Bodilsen Kaldahl create both a sophisticated and casual ambience. 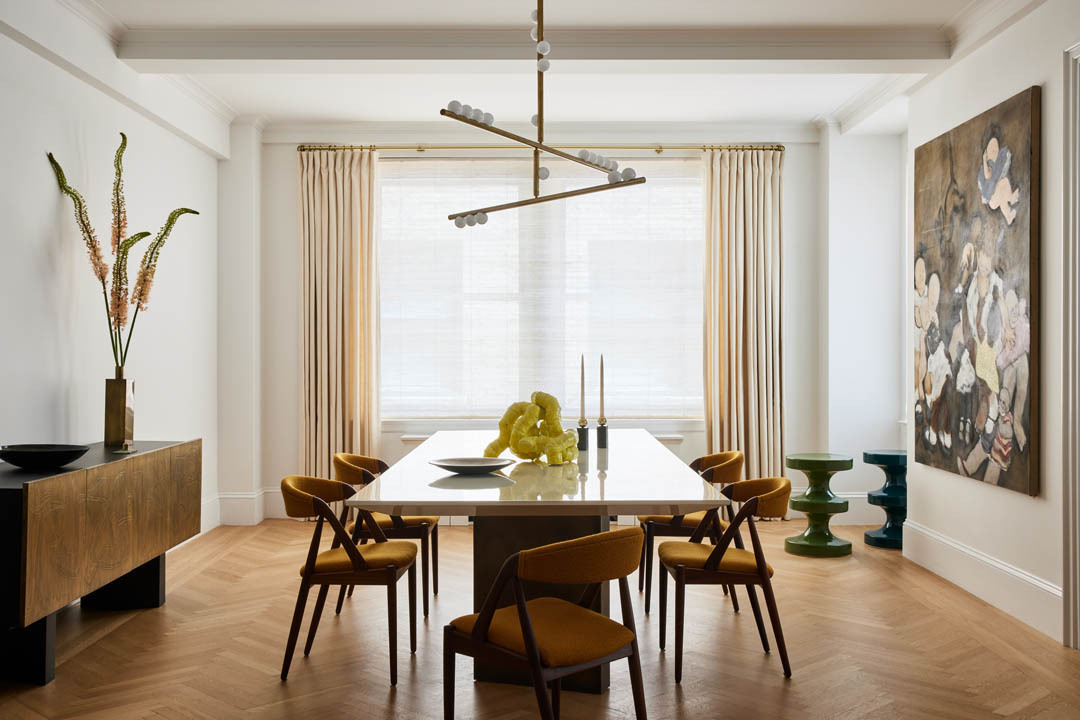 This spirit also pervades the living room, where the fireplace was remodelled. The mid-century sofas and the Saarinen chair and ottoman covered in charcoal mohair from Romo are placed on a Stark rug, while the teal blue lacquer desk from The Invisible Collection and the Richard Hawkins painting above it add more visual contrast. For her bedroom, the couple’s daughter wanted a decoration based on London’s pink Sketch restaurant designed by India Mahdavi, which then became the starting point for Fried. 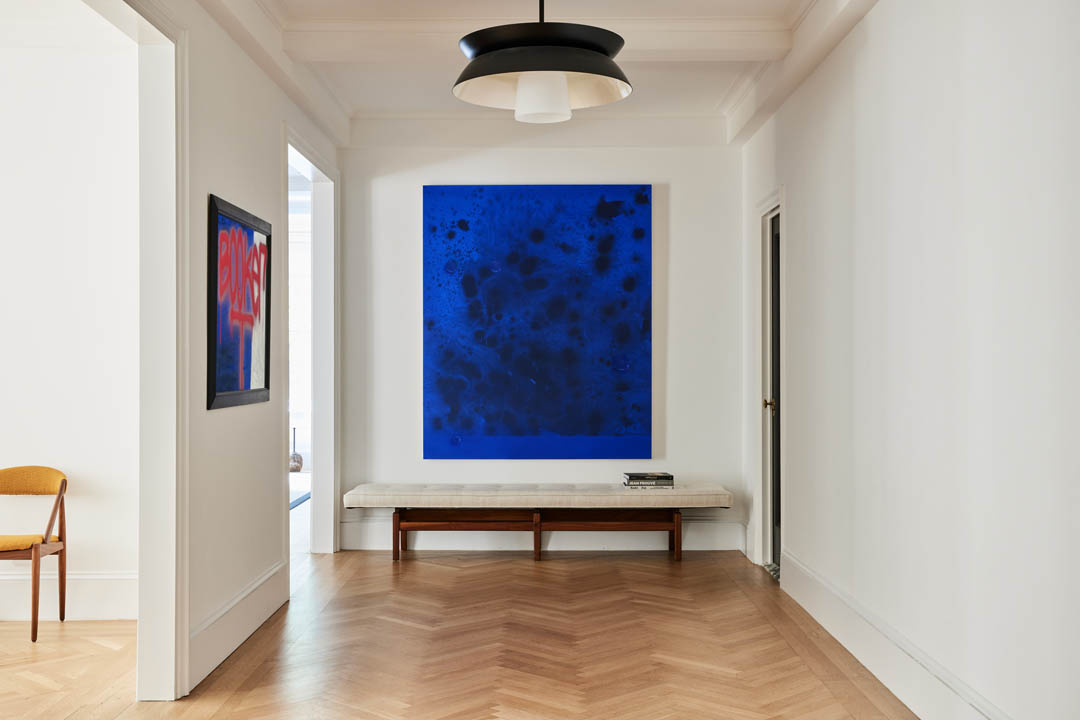 “Each room has a base of neutrals with pops of bold ’70s-like mustard, citrus green and pumpkin,” describes Fried, who used materials such as brass for the doors, plaster for the walls and wood for the floors. The cosy and refined aesthetic is also reflected throughout the curated selection of furnishing from different eras. 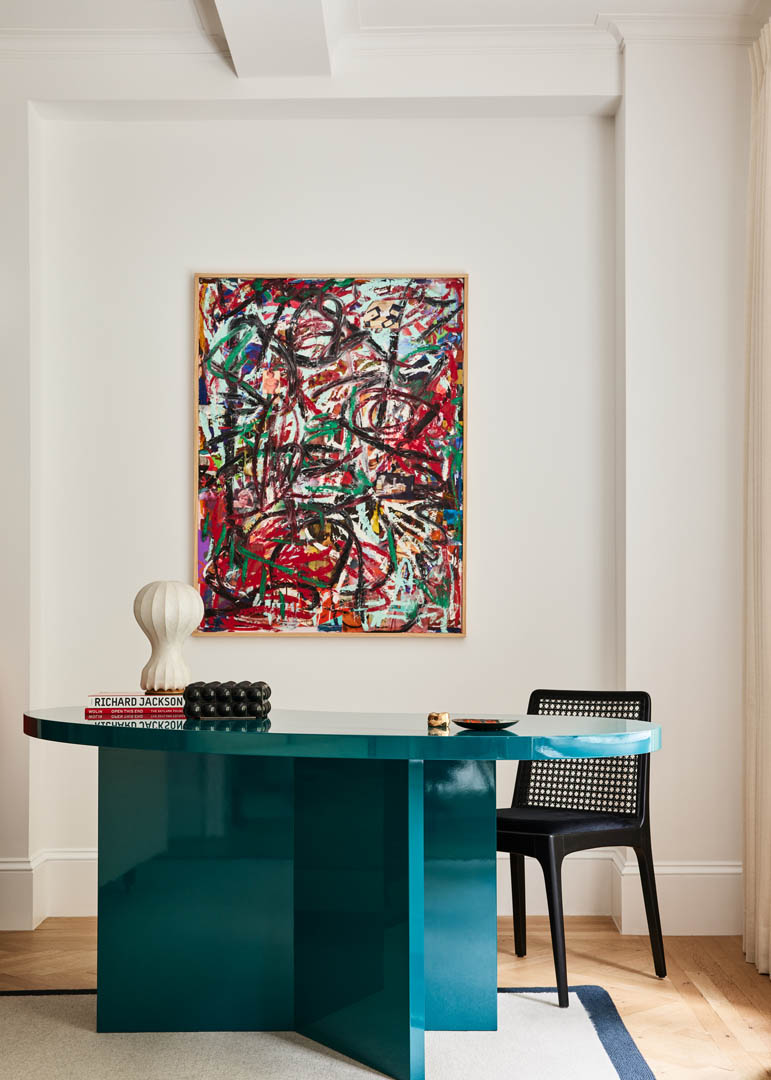 “The apartment has a great mix of vintage pieces from Scandinavian and other European designers mixed with modern American pieces. The interesting thing about this project is that we started with the furniture, and after the installation, the clients pulled pieces from their collection to curate the space.” 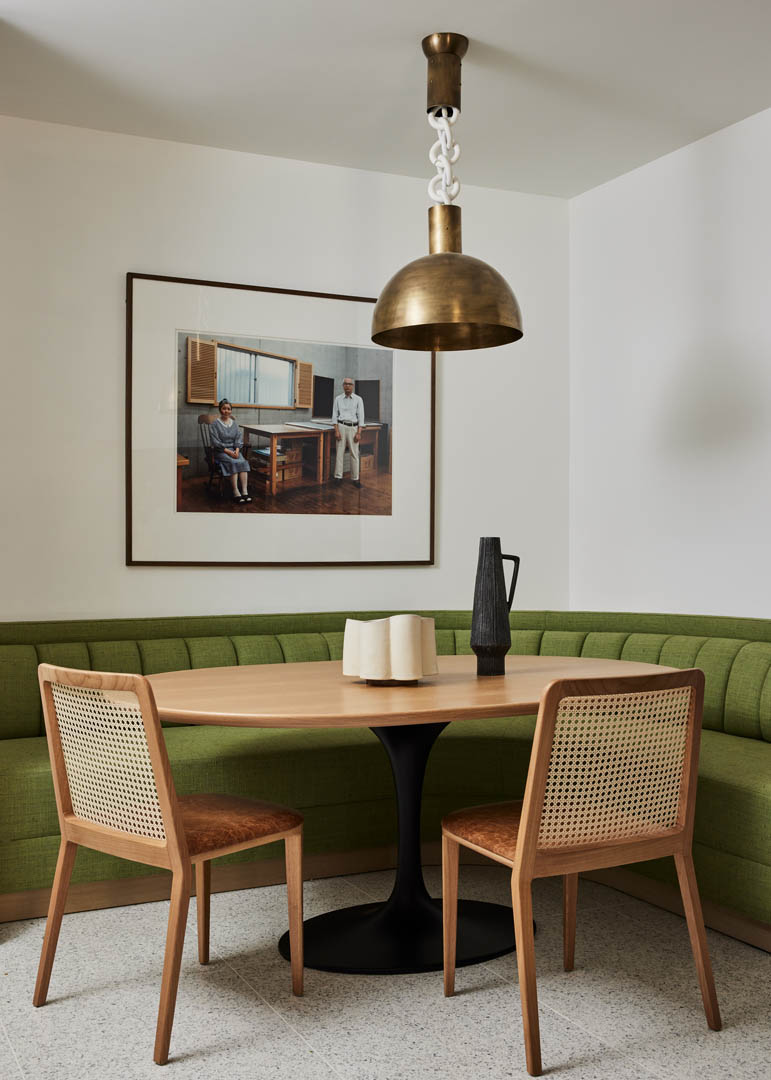 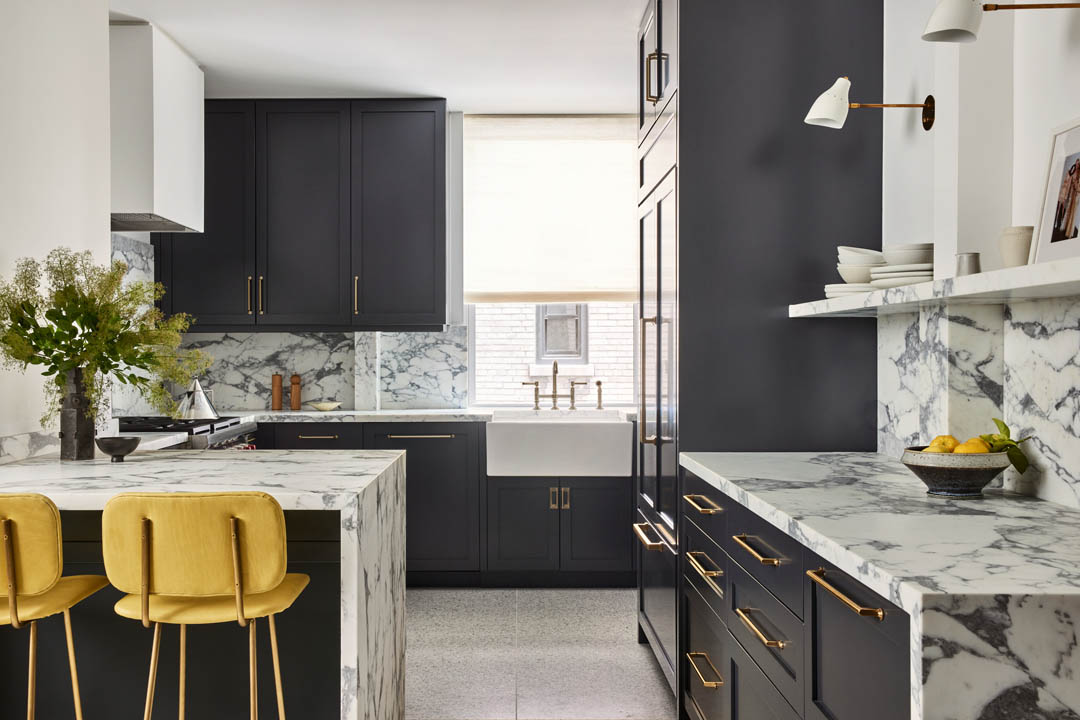 The result doesn’t disappoint. According to Fried, “It is clean and classic, but also edgy and cool.”

For Michelle and Jason Rubell, their pied-à-terre in the Big Apple has all the ingredients they wanted, including a timeless allure that will age gracefully. 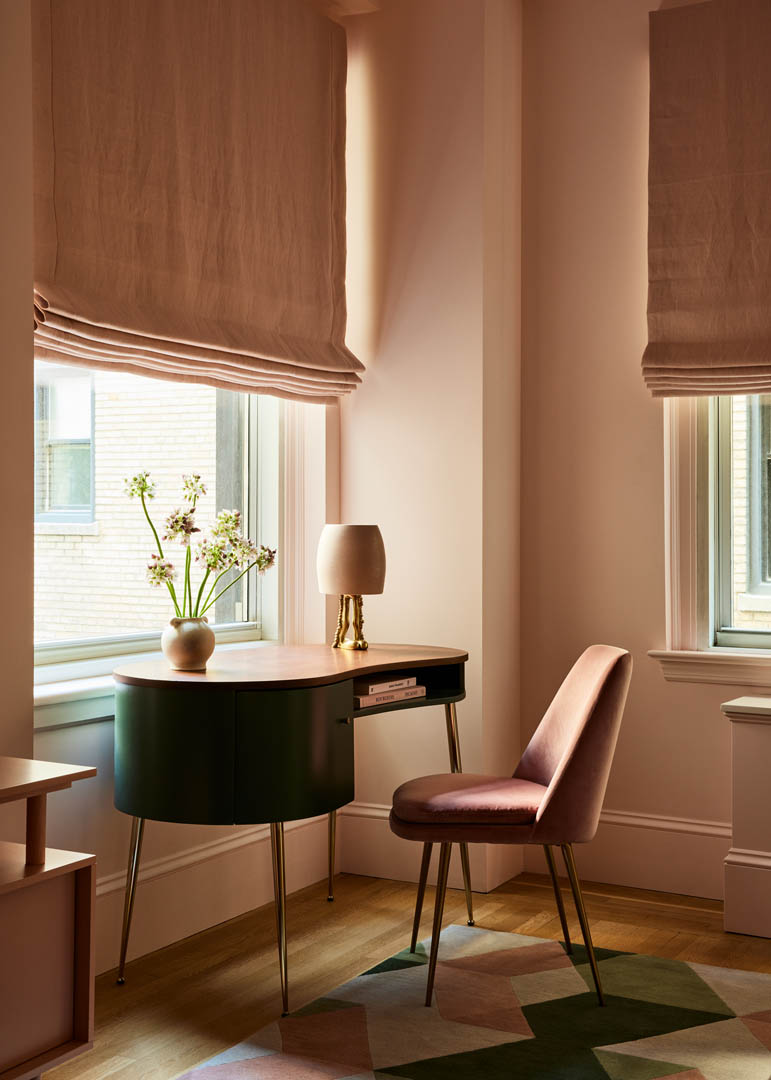 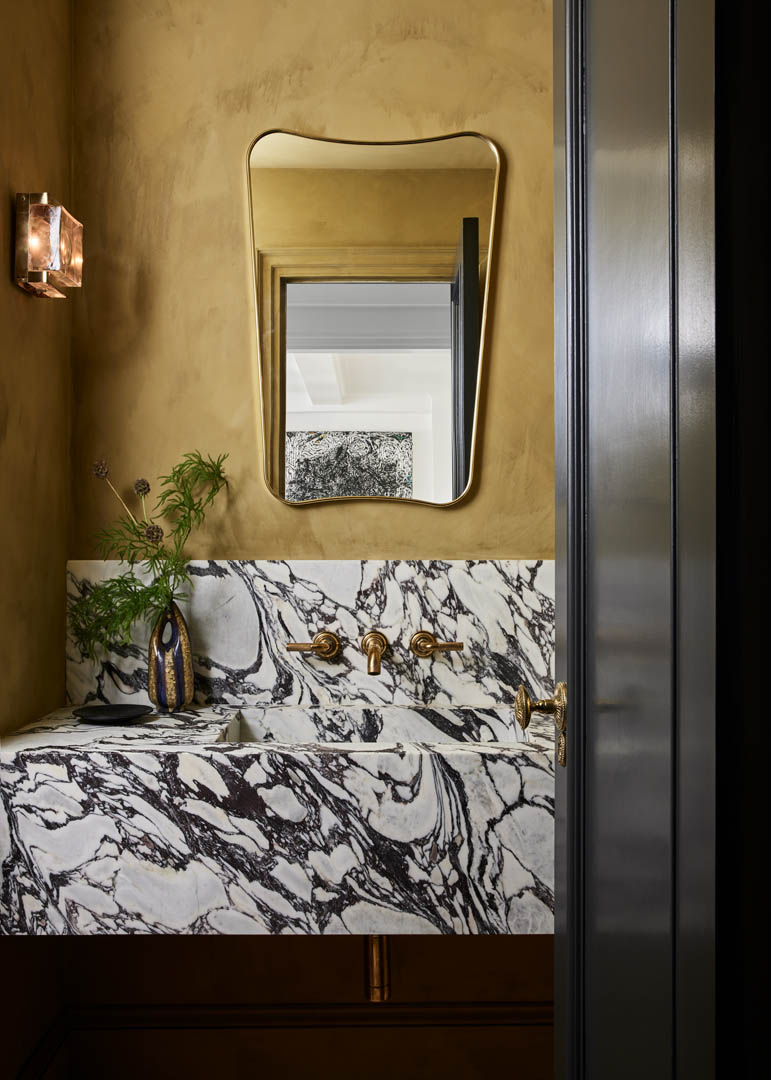 “Since my clients don’t live in New York City full-time, they wanted a home base that was comfortable and inviting,” concludes Fried. “The look is elevated and relaxed. Not every piece is precious but there are some gems in each room. This home is chic but not stuffy – the perfect base for a cool, contemporary art collection.”