This award recognises any building dedicated to living 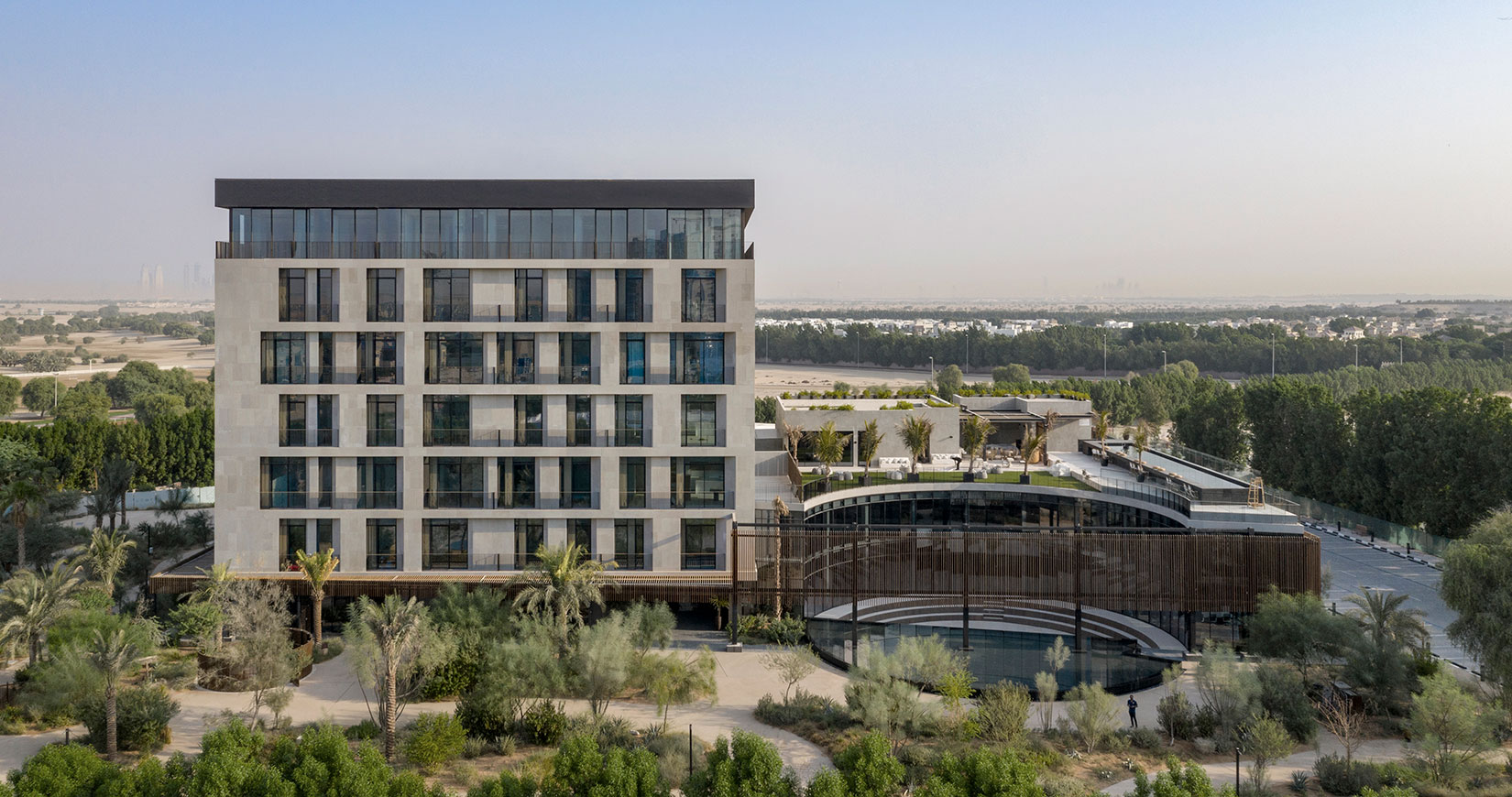 identity is pleased to announce the shortlist for the sixth annual identity Design Awards 2020, which is set to take place on 4 November in Dubai, UAE.

Over the coming weeks, we will be releasing this year’s shortlisted projects.

Here is the full shortlist for Architecture – Residential: 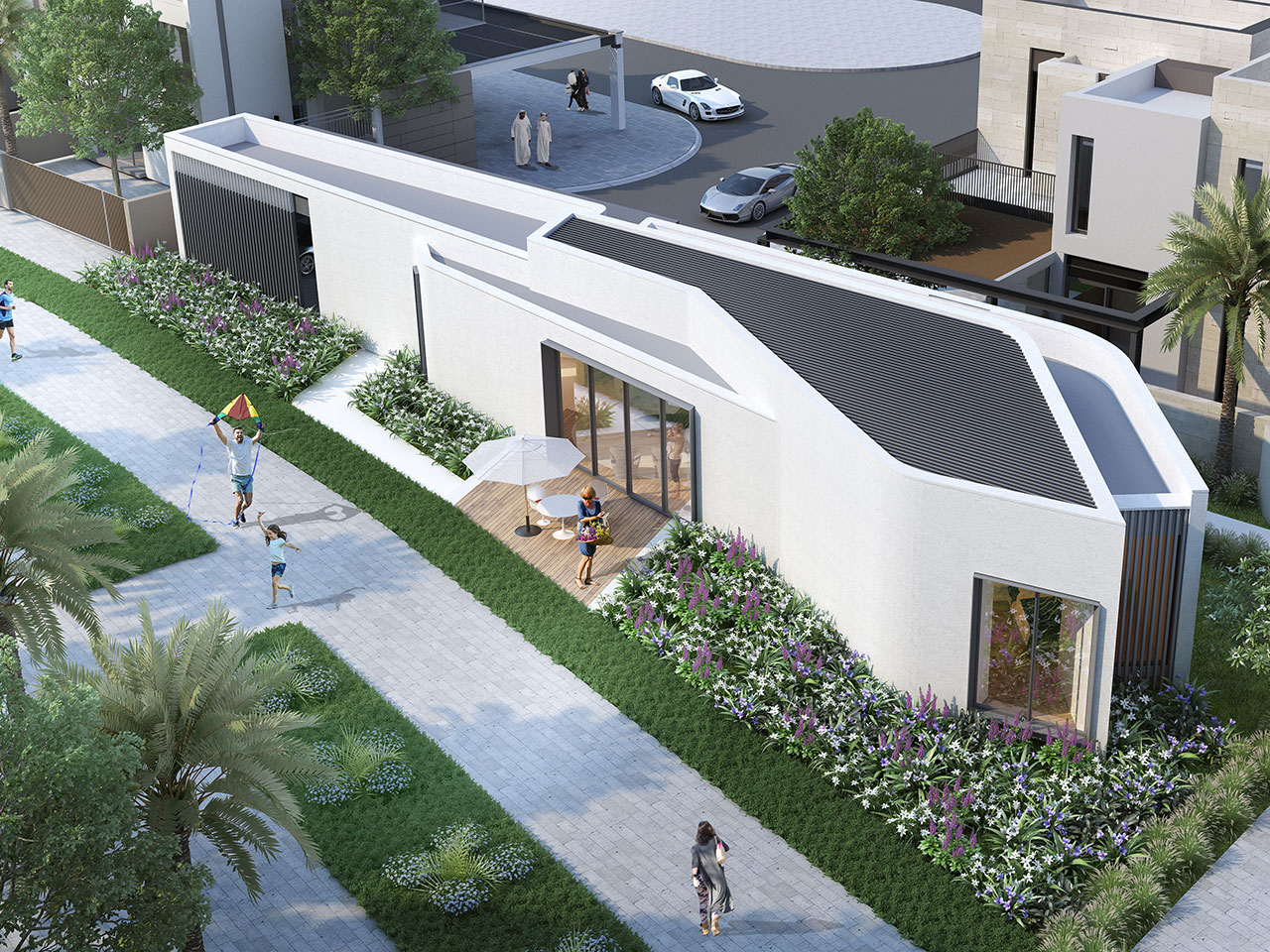 U+A was commissioned to design a 3-bedroom home, through the use of the latest construction method, 3D printing. 3D printing allowed the architectural form to be both organic and dynamic. The fluidity of the construction method, which involves moving parts, was expressed through the dynamism of the overall form. The design was inspired by the sand dunes of the UAE desert, that served as the reference for the architectural structure. The natural trail left on the sand from the desert winds has been symbolically expressed as the main texture within the 3D Printed Home. 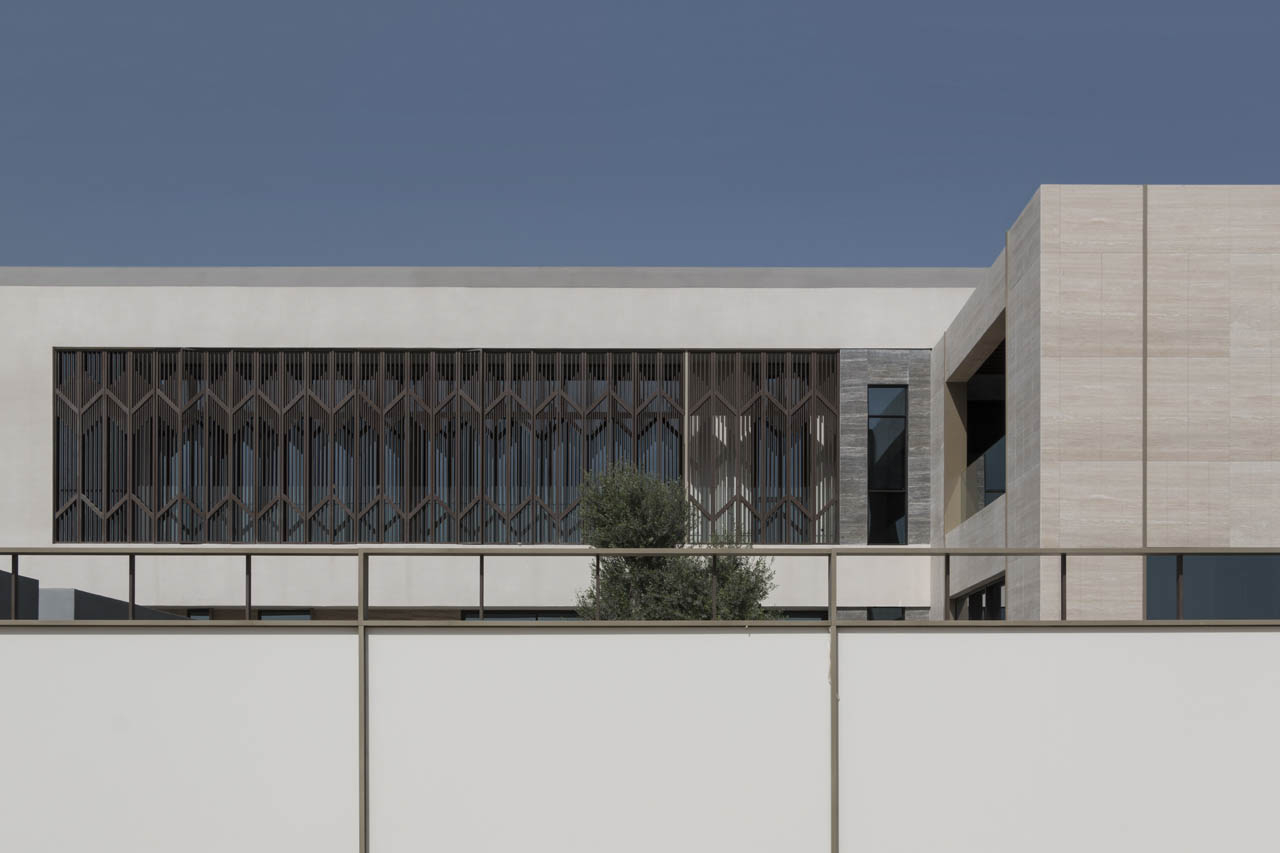 Contemporary box-like interlocking building forms and clearly defined architectural language make up the core of this villa by Binchy and Binchy Architecture. Though poetically juxtaposed, there is a clarity of form that is clearly articulated in the façade. The villa plan was sectioned into various parts, providing clarity while defining the symmetrical blocks positioned at the front and rear. The  architecture is further defined and pinned by double height walls finished with rare decorative marbles. The first floor structure was cantilevered to create symmetrical double height shaded spaces to c ‘peripheral courtyards’ shading the façades and private rooms, and a sunken six metre cantilevered terrace from the master bedroom, both shaded with trees. 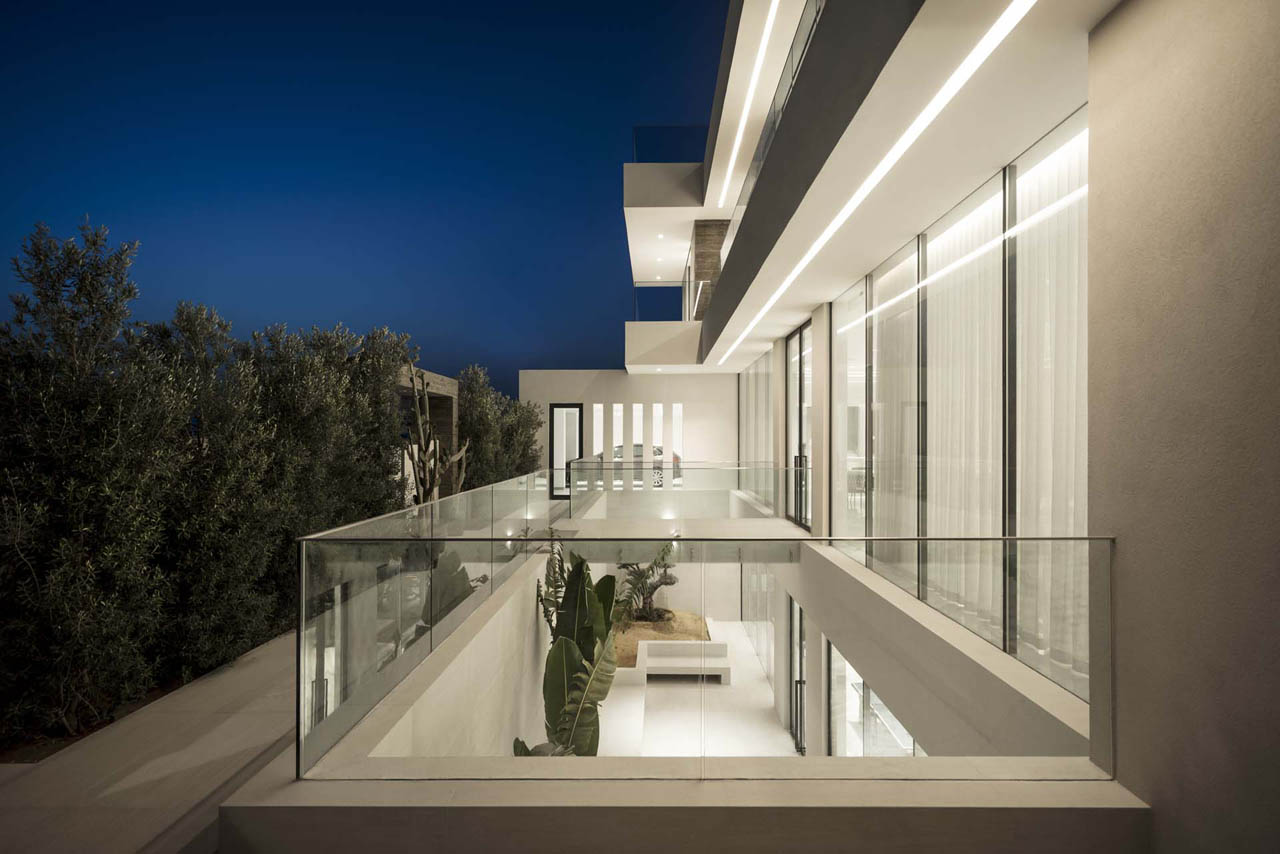 Studio Bruno Guelaff was commissioned to design  a 21,000 sqft residential villa located on Pearl Jumeirah in Dubai, UAE adjacent to the beach. The villa is located on a 10,549 sqft plot where privacy and proper internal layout was considered within the interior design approach along with a modern streamlined architectural design approach allowing for a good balance of natural light and privacy. Upon arriving to the villa you are greeted by a sleek bridge which hovers over the below courtyard to the basement entertainment areas. This allows for a dynamic arrival to the villa which surely entices the senses especially in the evening when the exterior and interior lighting dresses the elements. Large open spaces exude minimalism all the while bringing family together from kitchen areas to lounges. 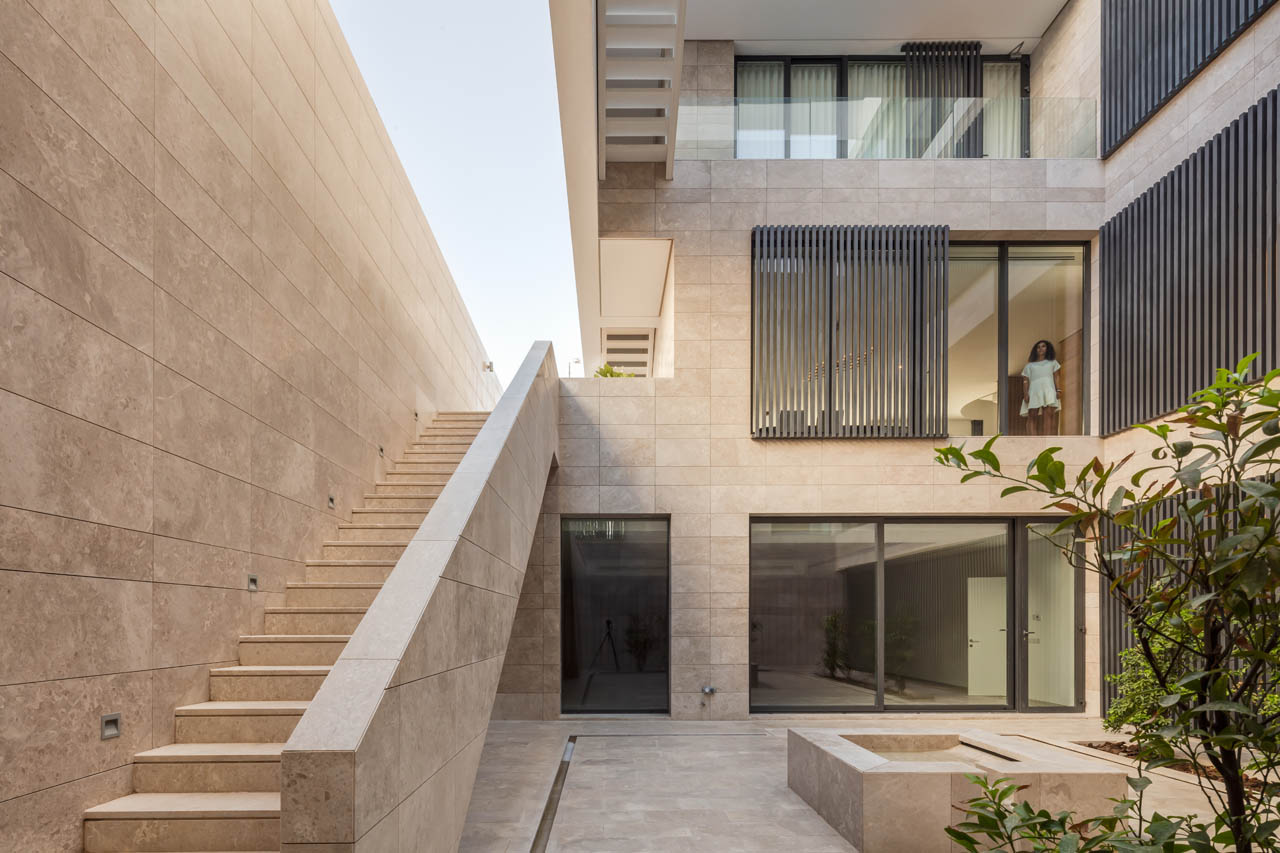 The house in Mishref is home to two brothers and their families with varying lifestyles and needs for both privacy and open spaces. Essentially an introverted composition of two separate living units grouped around a single courtyard, the house is an interpretation of the traditional courtyard house. The four-storey courtyard and void presented a question of human scale as well as connectivity between the living units facing each other. A circular loop comprised of a dramatic floating staircase connecting the balconies on multiple levels addresses these issues by punctuating the void.

KOA Canvas documented the successful and sustainable transformation of an existing office building into a thriving urban space for communal activities alongside the creation of an additional two new-built structures, with a variety of programmes that express contemporary architecture of the region. Despite Dubai’s natural desert landscape, the design approach for such wider context in mind allowed T.ZED Architects to address the architectural proposition by absorbing and being inspired by the natural lush environment surrounding the project, and the elements beyond. The materiality of this project was heavily inspired by the rich, buoyant and lush eco-system surrounding the area. The client commissioned Carl Gerges Architects to build a remote retreat for his family and himself. The villa is designed to emit feelings of harmonious tranquility with nature’s many sensorial layers, for a solemn hideout, where privacy was of top priority. The walls are naturally finished with poured earth concrete emitting an earthy sensorial balance. The sliding windows are floor to ceiling and also help blurring the line between indoors and outdoors. Villa Chams embraces its surrounding’s identity from the flora to the Roman temples, and presents itself as a melodically elemental story teller. At a distant glance, this one shelled structure grounds itself horizontally, while respectfully blending in with the mindfully preserved rocks, opuntia, olive trees and other flora on a backdrop of distant mountains. Upon a more intimate inspection, sporadically equidistant walls and columns orchestrate a rhythmic flow on a rudimentary grid, creating both introverted spaces and open extensions. The Villa Jumeirah fulfils the clients’ brief of a secluded tranquil villa, possessing a contained, calm and intimate family feel. Throughout the design the courtyard is the key architectural organizational element providing visual relief and spatial hierarchy. An ornamental tree provides shade whilst a water feature’s trickling sound permeates the space. On the ground floor the U shape site planning provides separation of guest wing and home office functions from the more family orientated wing. Whilst on the upper levels the courtyard provides a unification of the family’s bedrooms with adjacency of the parent’s master bedroom with the young children rooms.A shaded roof terrace with accessibility from the family areas provides an further family entertainment space. The spatial experience and quality can be transformed by opening the glazed floor to ceiling walls allowing views to the lush garden, linking interior and exterior space. A small family pool is easily accessed from the main house where an external dining area provides a transition between this area and the garden