Dragon Pavilion by Aurelien Chen is inspired by a Chinese landscape

200 inox poles subtly appears in the distance, almost like an optical illusion. 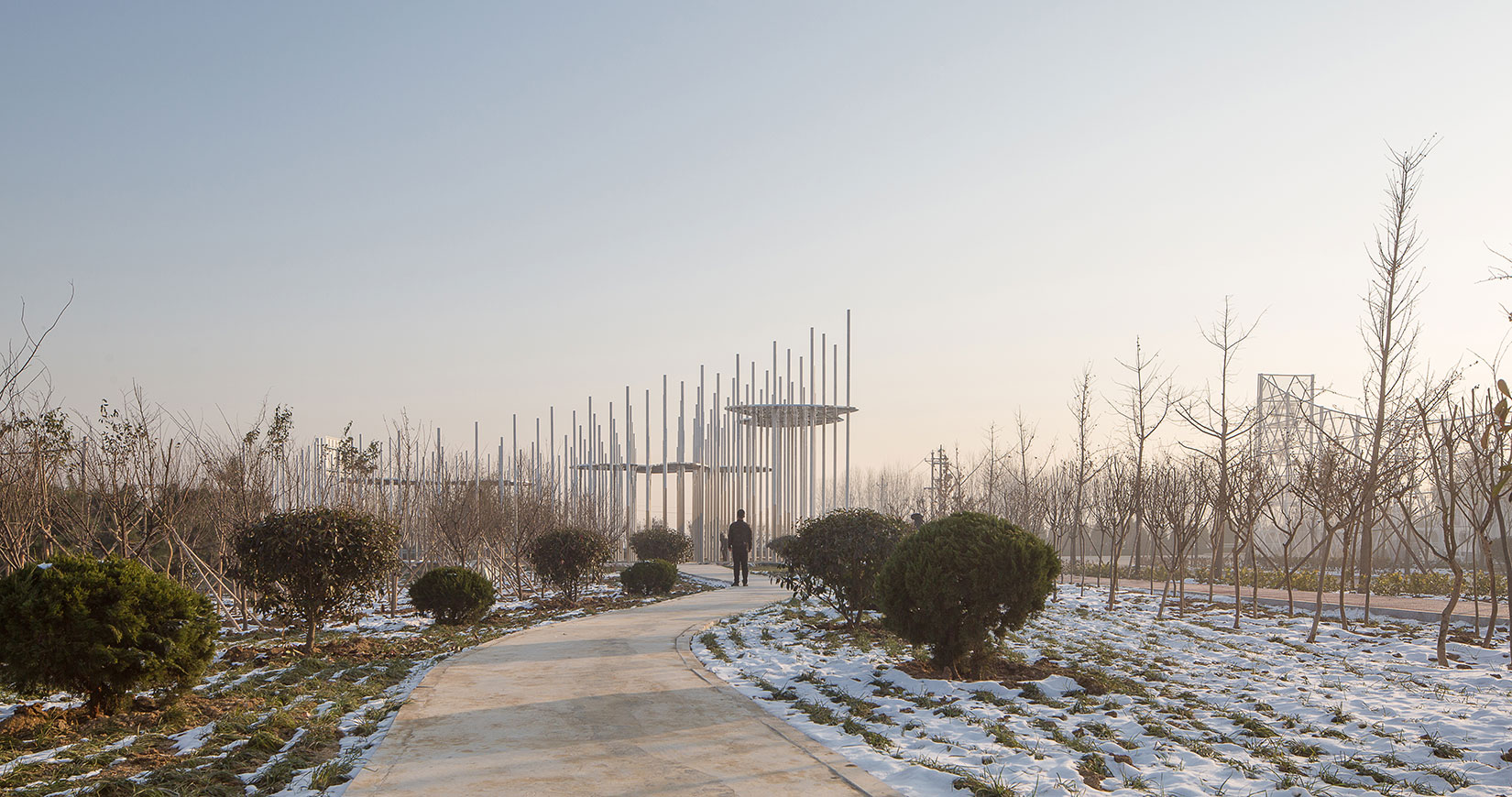 Set against the backdrop of Rizhao, a coastal city in the southeastern Chinese province of Shandong, an ethereal installation emerges like a mirage from the roadside, marking the southern entrance to Zhulong Shan – the Dragon Mountain Natural Site. Depicting a typical Chinese landscape, or ‘shan shui’, the Dragon Mountain Pavilion evokes an image of mountains, forest, clouds and water.

Commissioned by Rizhao Fada Jituan, the company in charge of the tourism development of the natural scenic location, the permanent pavilion is the counterpart to the other pavilion that marks the southern entrance to the site; both have been designed by architect Aurelien Chen. The southern gate and tourist centre integrated into the surrounding landscape of the site uses traditional local materials such as stone, wood and bamboo. 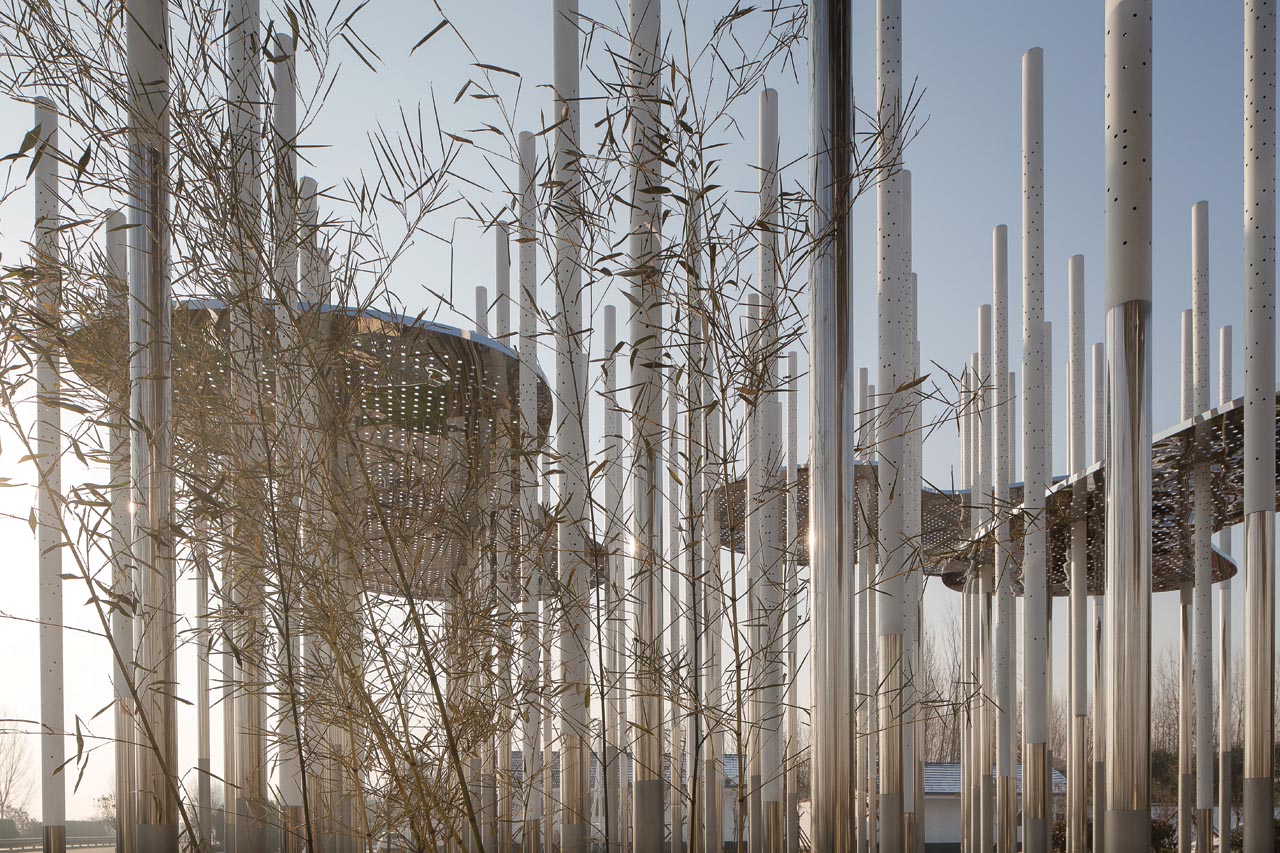 “My goal was to create a dialogue between these two projects,” Chen explains. “They are opposites and yet they complete each other, just like the unity of opposites of Yin and Yang. In these two projects, mass is an answer to lightness, while stones are cemented together and poles are separated from one another. The general shape – a mountain – is identical for both projects.”

The structure primarily serves as a roadside landmark to draw attention to the natural park, featuring a variety of sequences through which it can be approached and many more levels in the way it can be perceived. Chen compares the structure of the pavilion to a painting that has been realised in a physical, contemporary form. It is also a space for “pause, shelter and transition between travel and a visit to the natural site,” he says.

While approaching the site from the street, a vibrant mountainous structure composed of 200 inox poles subtly appears in the distance, almost like an optical illusion. With speed, the poles become a single surface and the effects created by the different materials making up the poles reveal the shape of a new mountain.

While moving closer, one discovers a miniature landscape in which one can move and stroll at leisure. The poles become a forest, while a black marble river invites visitors to walk towards the real mountain that stands out against the horizon. The canopies placed above the visitors’ heads to represent clouds turn out to be mirrors. In this peaceful setting, urban life continues reflecting itself on the mirror canopies and on the surfaces of the poles. The perforations on the mirror panels create an interplay of light and shadow, marking the passing of time.

At night, thousands of stars appear on the poles, perforated randomly, giving shape to a mountain vibrant with light. 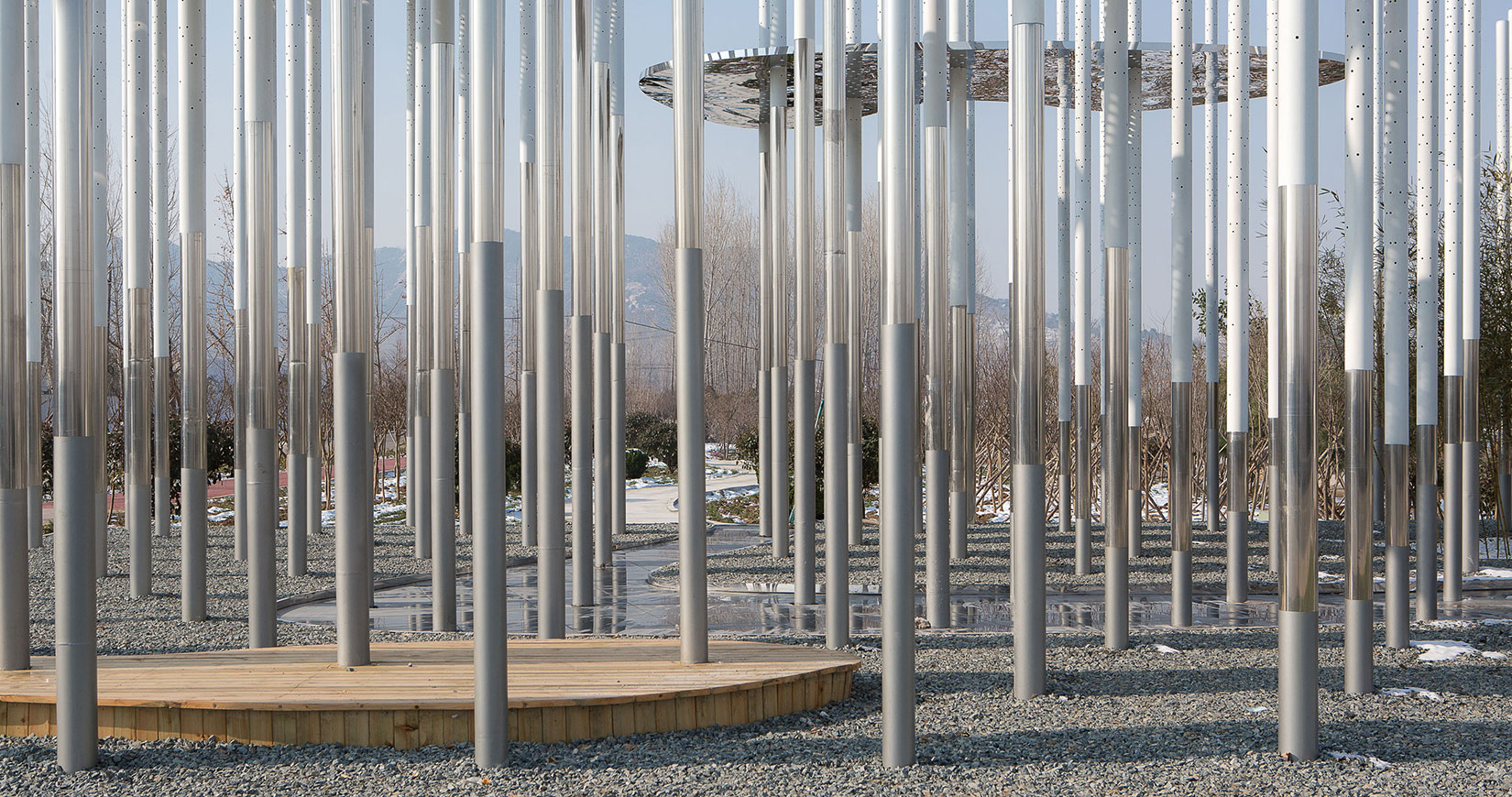 “The installation is a gateway, a space in between the hectic and trafficked road and the majestic, still natural landscape of the mountain. It allows a transition between these two spaces, dimensions and states of mind, and emotions that are evoked in the visitor,” Chen reflects.

He explains how the main effects that trigger differences in perception are down to the use of materials. “The first effect is an optical illusion given to the visitors who arrive by car. Each pole is made of three different materials, which are, from the base to the top: stainless steel, polished stainless steel and white paint. With the effect of the speed, the poles become a single surface and the reflections created by the different materials composing the poles reveal the shape of a mountain. 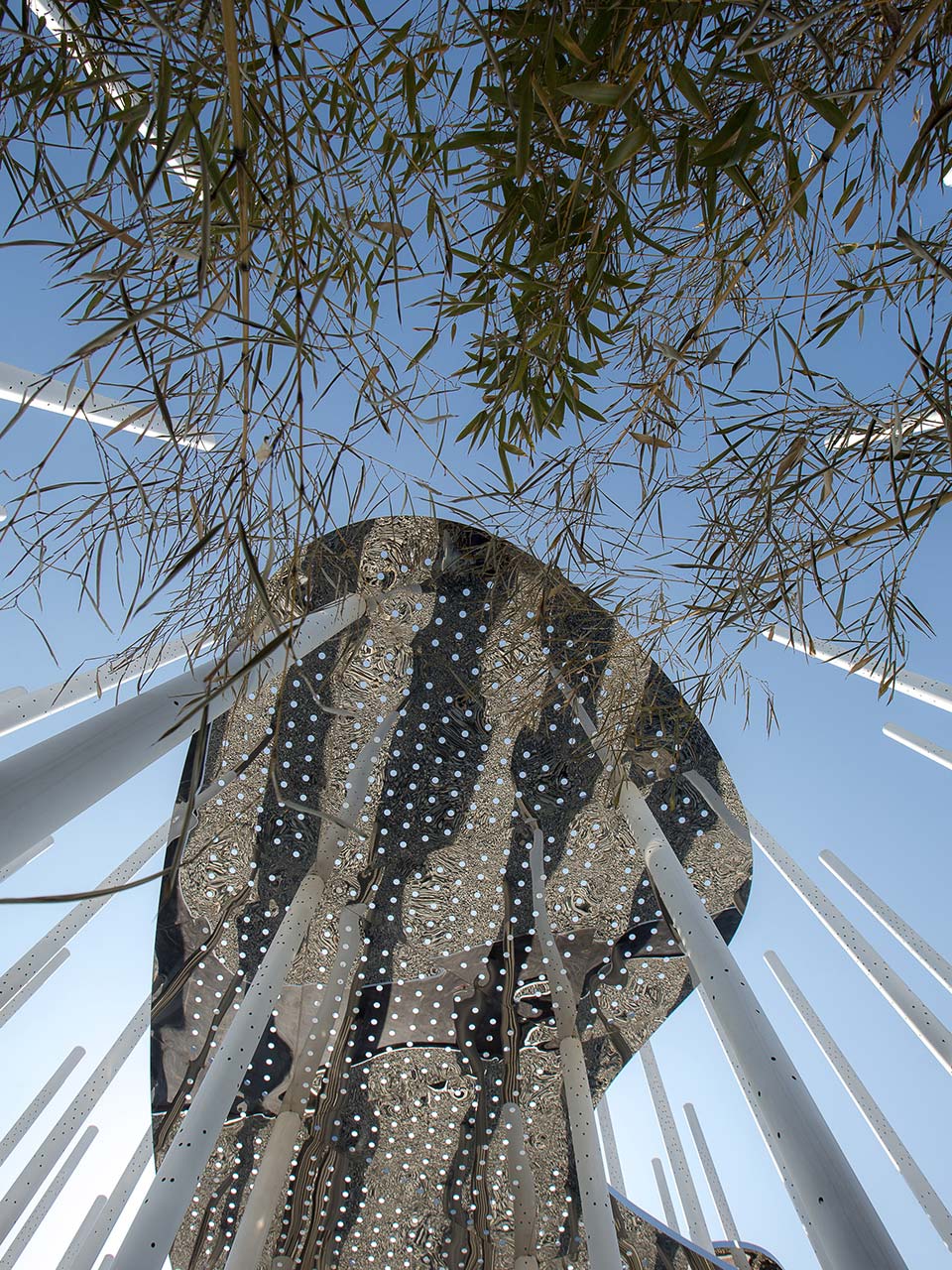 “The second effect is more abstract,” he continues. “It refers to ‘time’, or more precisely, to different temporalities. It’s a contrast to the adjacent road. I counterposed a poetic experience, a temporal and spatial pause, creating a moment of calm and reflection on the elements that make up a traditional Chinese landscape. The images of cars passing by are reflected over the poles, which later disappear behind the poles and reappear between the gaps.

“Inside the installation there is an opposite temporality; one that is slow and marked not only by the shadows of the poles that are aligned as in a solar clock, but also by the lighting effects created by the rays of sunlight passing through the perforations of the artificial clouds placed on top.”

Chen considers Dragon Mountain Pavilion to be many things: sculpture, architecture and landscape, all at the same time. “These three aspects can be more or less dominant according to the different scales of perception. From afar, the viewer perceives a sculpture vibrant with light. While approaching one starts to perceive a place, an architectural space integrated in the landscape; and finally, discovers and experiences a miniature landscape.”