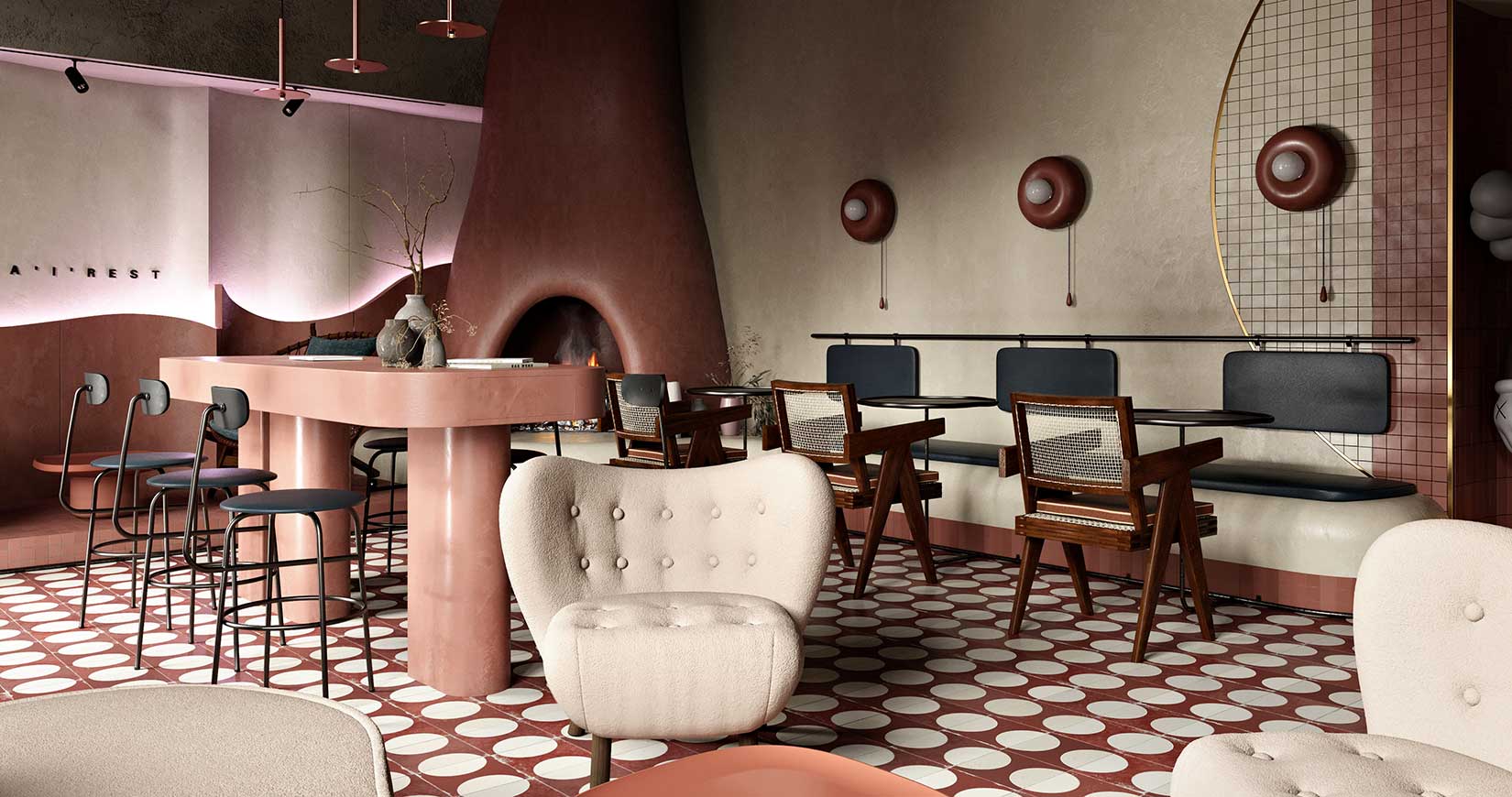 Set in the historical heart of Budapest, an early 20th-century red brick building is now home to a gastronomic hot spot that is making its mark on the city. Designed by Roman Plyus, the new venue is the latest addition to the Russian interior designer’s modest portfolio of projects that explore the boundaries between art and design. 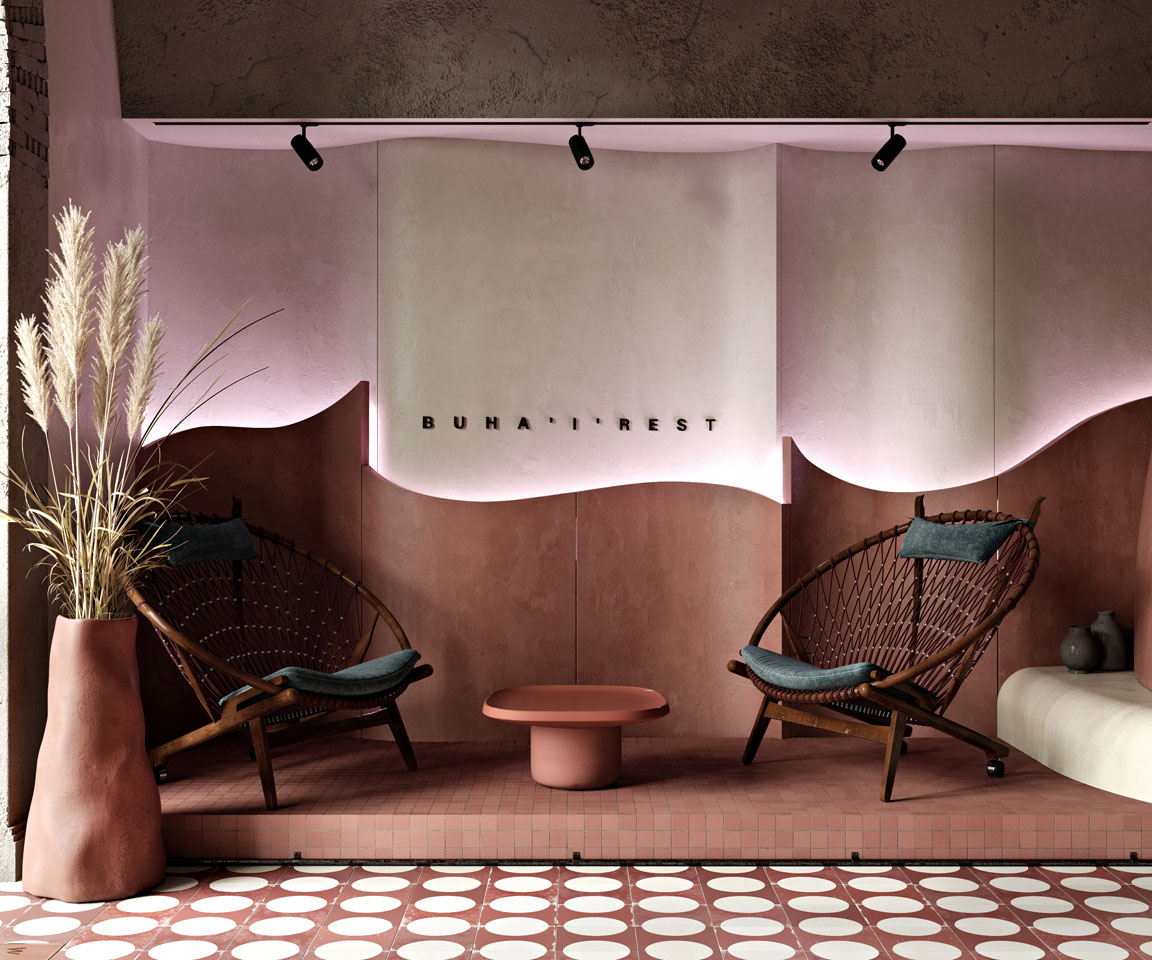 Buhairest dubs itself a ‘stylish concept bar’ and a lounge for luxury dining. The 350-square-metre space divides into a bar on one side and a more intimate lounge setting on the other.

“The main idea of the design was to combine the two epochs of the 20th and the 21st centuries, creating a dialogue between vintage and modern design. The result is a harmonious combination of both in one space,” Plyus describes. 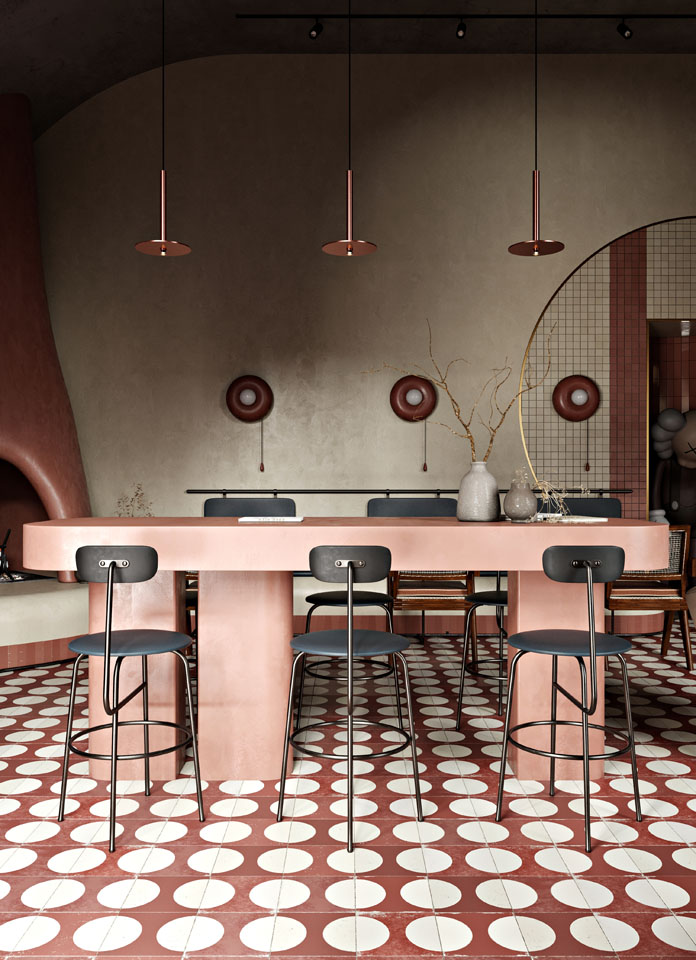 “The colour palette was dictated by the facade of the building,” he continues. “I would like the user to feel the connection between the external façade and what is inside. After all, any acquaintance with the interior begins with the facade. When you first see it, you begin to have expectations of what is awaiting you inside. I wanted to make sure that these expectations were met.”

Elements of the facades such as the huge concrete arches along with the floors and the ceiling were left in their found state. The rusty-hued floor tiles with polka-dot patterns are reclaimed while many of the materials used across the venue are sustainably sourced. 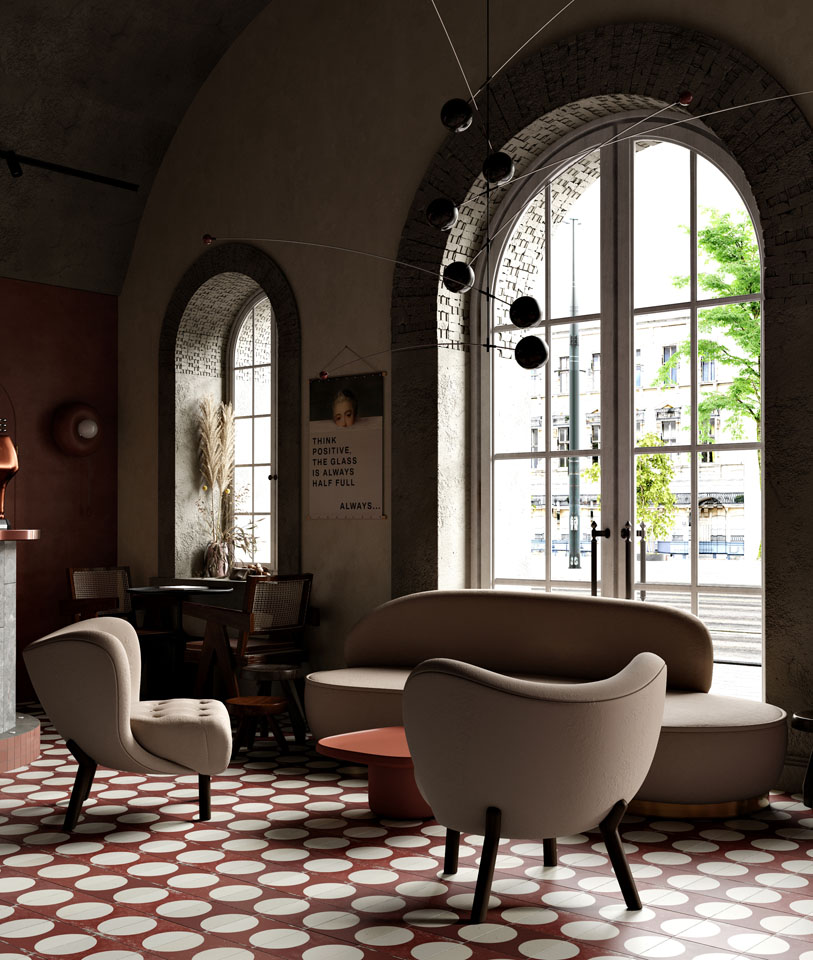 “We have tried to preserve and restore many of the building’s authentic elements and integrate the design around this story,” Plyus says.

Many of the dramatic features that complete the design are chosen to create a visual aesthetic that is Instagrammable. Recording moments of one’s life is something Plyus believes to be an act that predates our current lifestyle, going all the way back to the time of cave drawings. 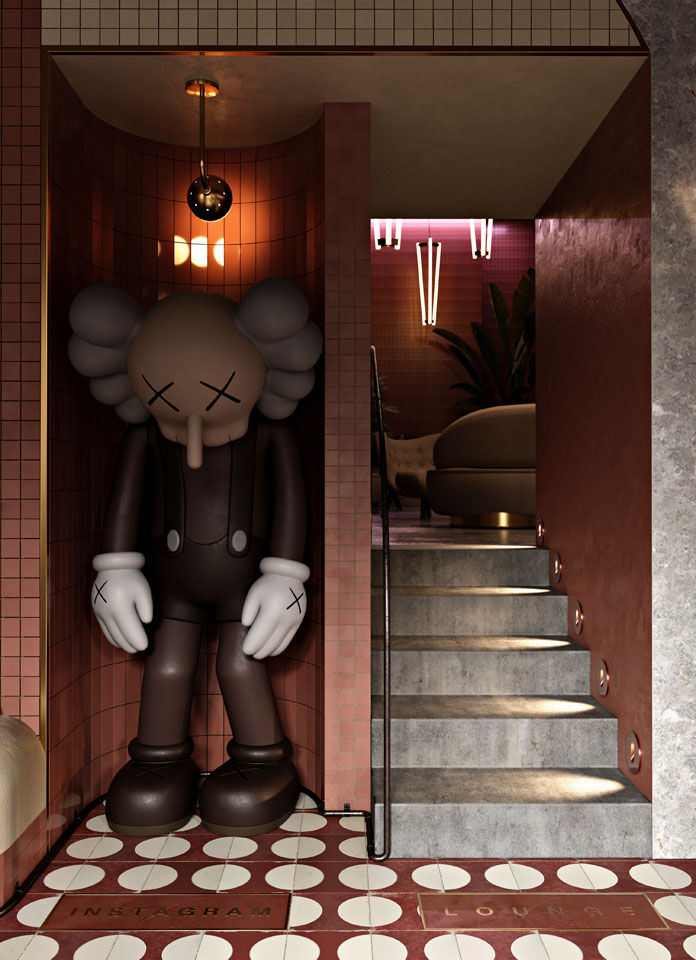 One of such features is a huge sculpture by American artist KAWS, called Small Lie, that is tucked inside a curved niche at the rear of the venue, depicting a Pinocchio-inspired figure with a bowed head. If this isn’t already an invitation enough to snap a selfie, then the brass-framed plate on the floor that spells out ‘Instagram’ leaves no doubt that it is the perfect spot for photos.

Other Instagram-friendly elements include a bulbous fireplace at the corner of the main room, as well as break out areas featuring a pair of round wicker seats that are offset by decorative terracotta-coloured plaster panels. Russet-hued tones dress various elements of the space including the central high-table and the circular wall sconces. 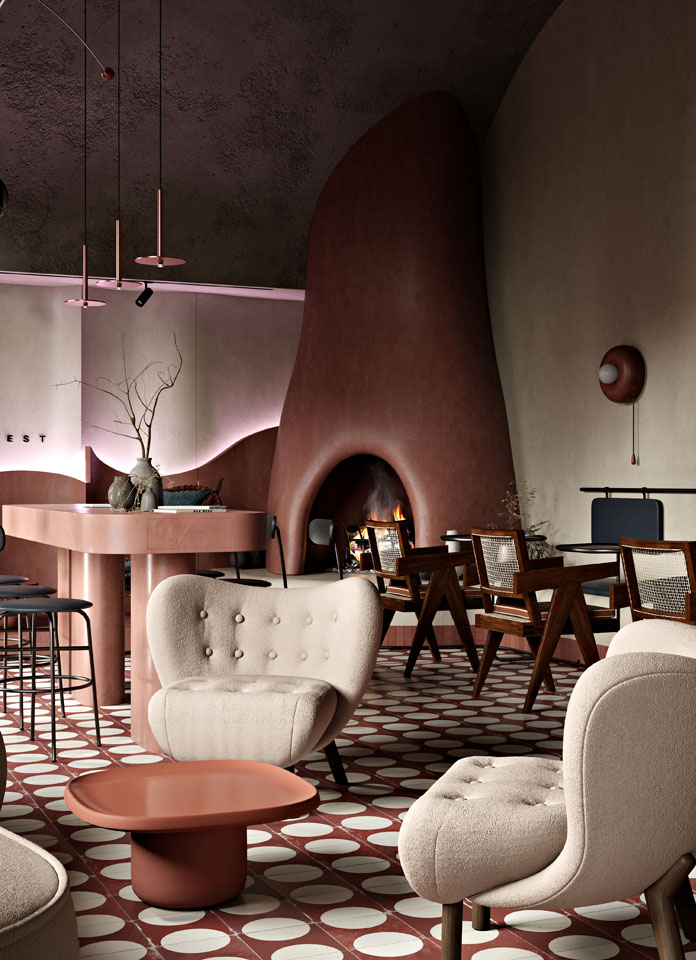 The furniture consists of an interplay of modern and vintage furniture including the likes of Menu and Moooi, that sit alongside legendary names in furniture design of the 20th century, such as chairs by Hans Wegner and Pierre Jeanneret, which the owner had left behind from the previous venue.

Clay-coloured leather cushions cover the bench seats, while earth-toned ceramic pots decorate the space with dry flowers. Grey marble has been crafted for the base of the bar counter, extending up an adjacent wall that offers a sense of contrast to the rest of the surfaces. 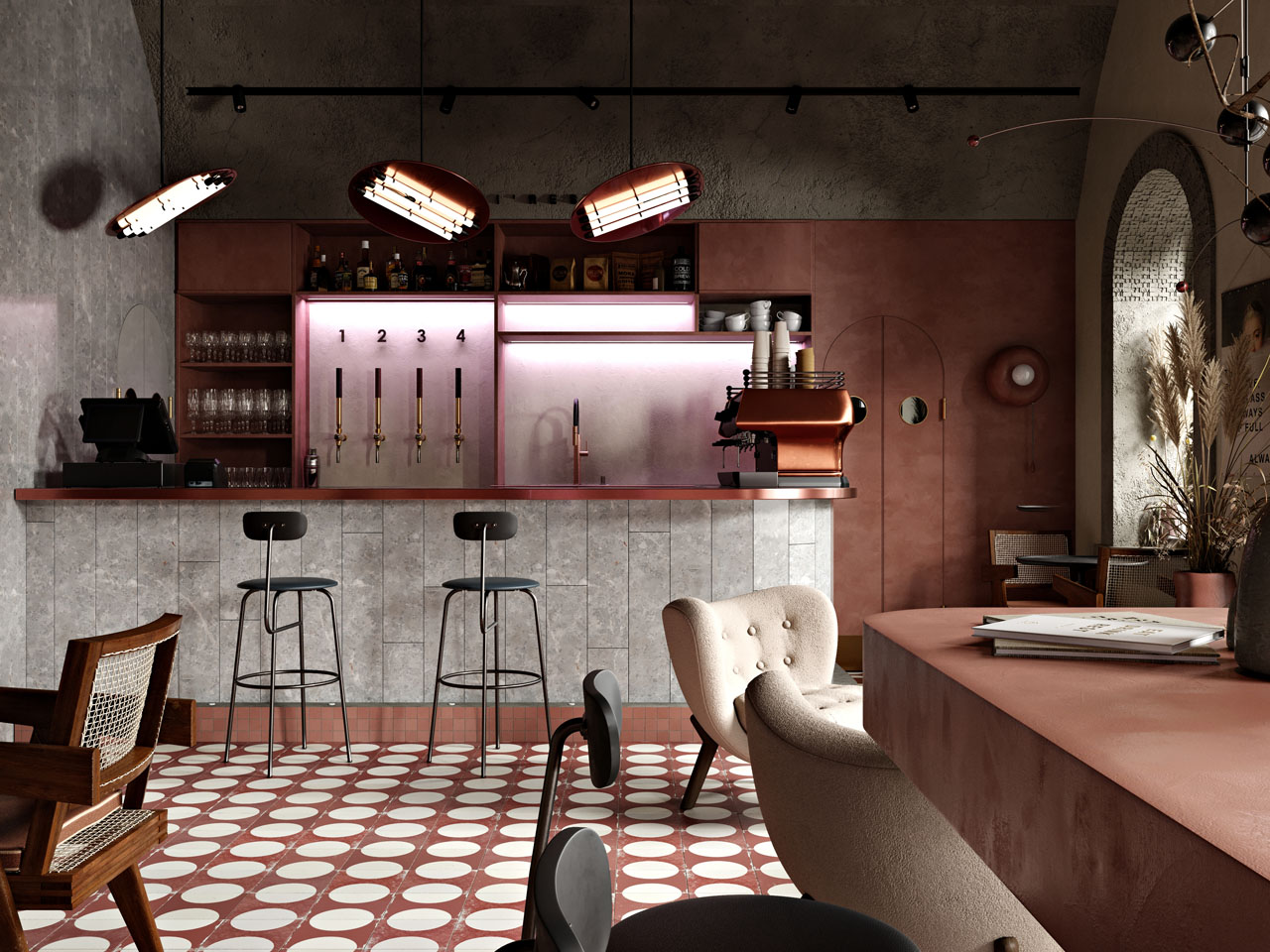 A mixture of elements, applications and visual references continue throughout the rest of the venue. A modular light sculpture that hangs above curvaceous seating is handmade by local craftsmen and inspired by Alexander Calder, while on the tables, the menus and coasters are made using upcycled paper and plastic.

“In design, I prefer simple forms with emotional overtones. Exploring the boundaries between art and design, as well as the ability to exchange ideas and emotions through objects has long fuelled my practice,” Plyus explains. “With Buhirest, I tried to create an atmosphere of warmth and comfort.” 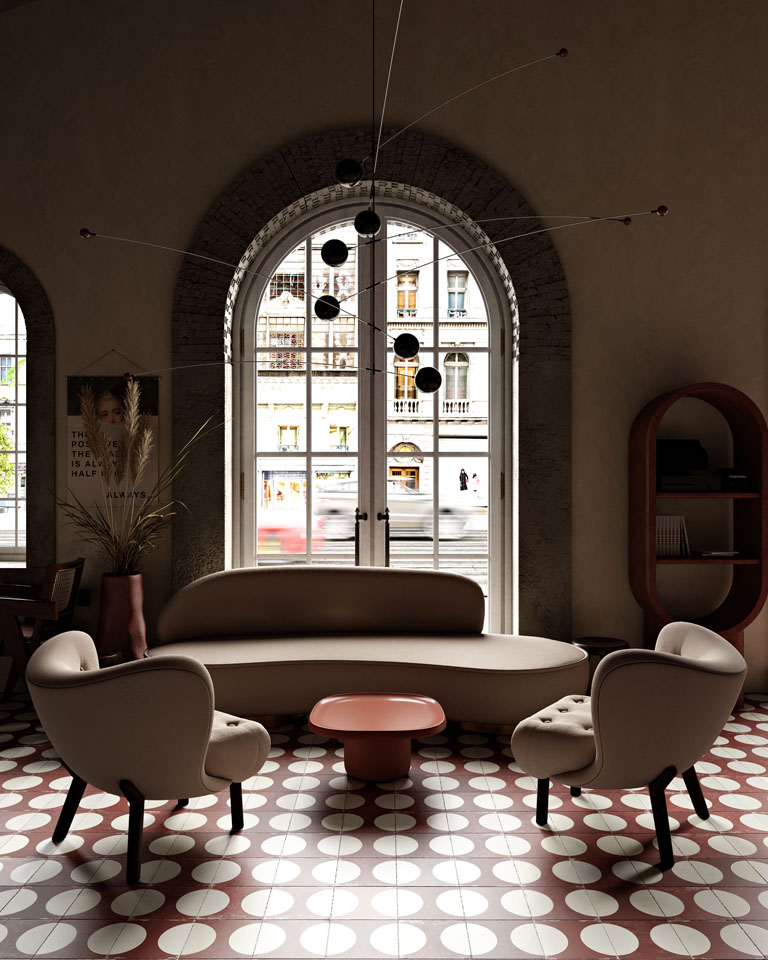