In the residential area of Anfa in Casablanca, this house, which was built around 15 years ago, features a minimalist and contemporary architecture. All white from the outside, the building has simple forms and large windows. Recently, Ali Lahlou – who helms ALD Studio – was in charge of transforming the interior spaces for a Lebanese couple in their late 30s who live between Belgium and Morocco. 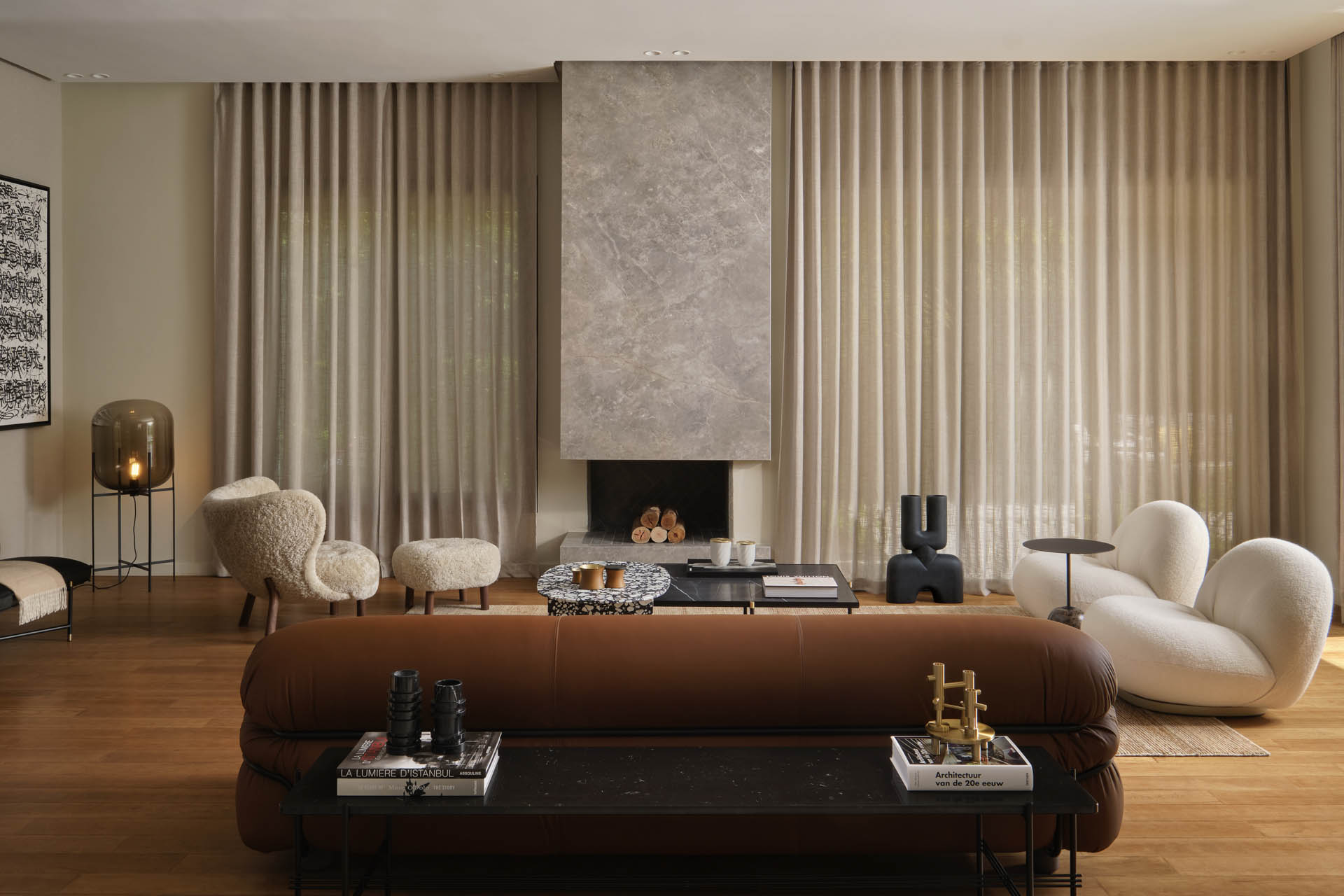 “They bought the house three years ago and wanted to change the layout to adapt it to their lifestyle, without touching the architecture of the façade,” shares Lahlou.

Organised across three floors and spread over 350 square metres, the home features a small basement with a compact kitchen plus a room for the staff. The main floor has three living areas while the upper level is occupied by the main bedroom, a large closet and a guest bedroom. 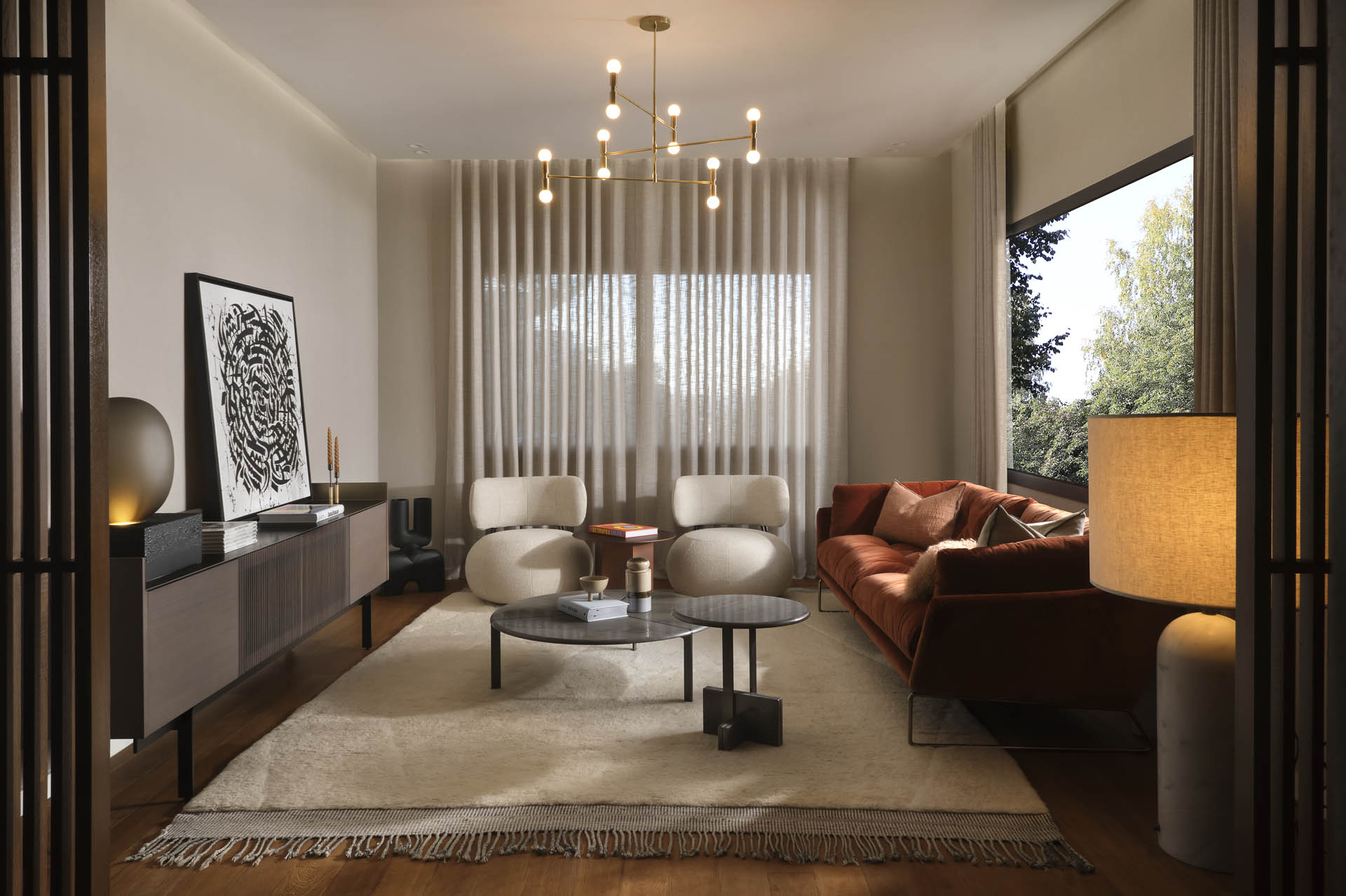 “The idea was to have three different living rooms with three different colour palettes and to make them all coexist gracefully,” says Lahlou. Inspired by nature, one room is called the ‘salon vert’ (‘green living room’ in French) by the interior architect, who designed it as a reinterpretation of the Haussmann style, with grey and white landscape Ananbô wallpaper framed by the mouldings. “I wanted to highlight the green tone of the New York sofa by Saba, as if the colour was absorbed from the trees of the wallpaper,” explains Lahlou. “This made the whole space eye-catching and different.” 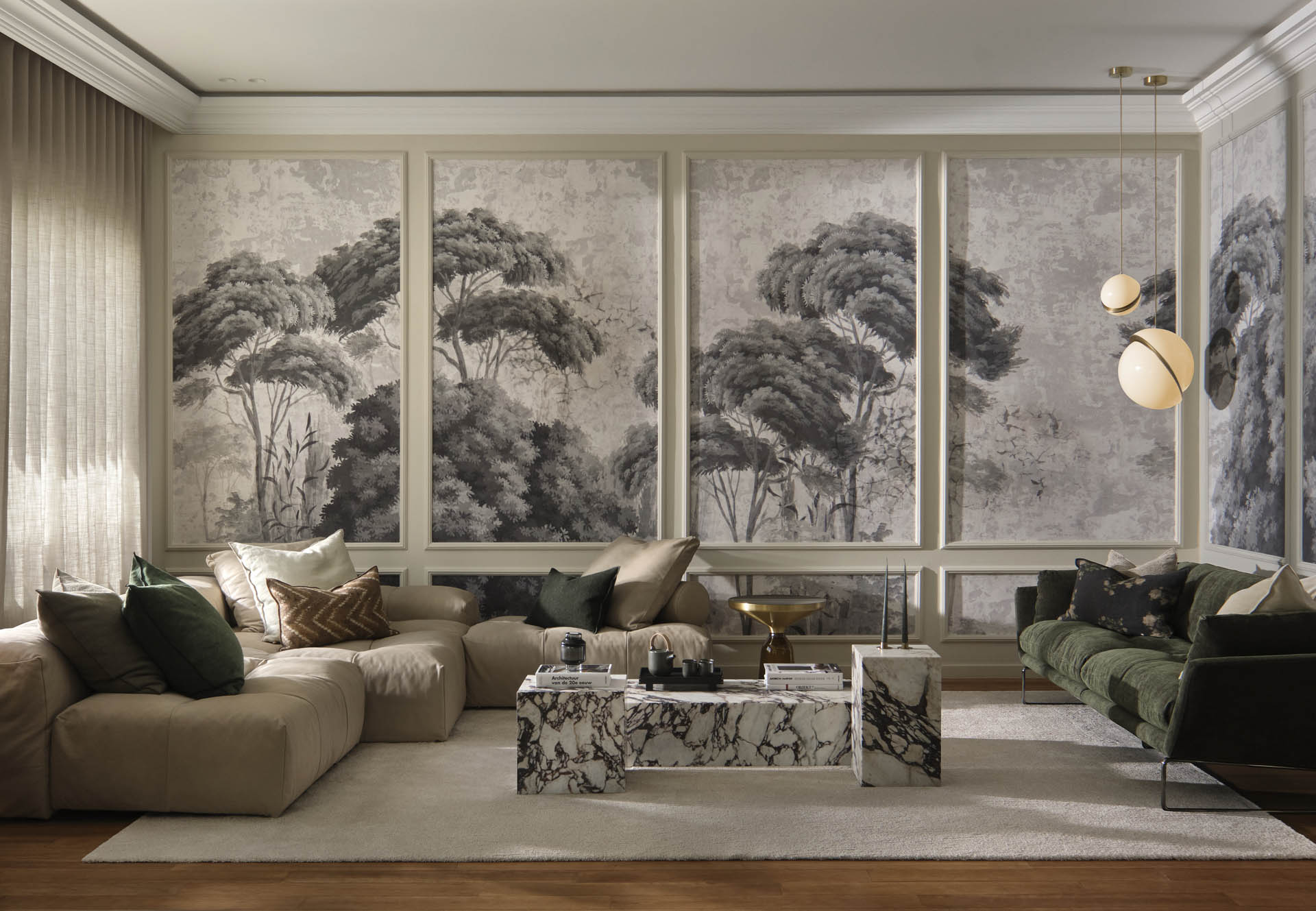 The combination of a beige leather Pixel sofa by Saba, Plinth tables in Calacatta viola marble by Menu, Crescent Light suspension by Lee Broom and Bell side table by Sebastian Herkner for ClassiCon (the latter two both in brass) intertwine chic, minimalist and warm touches for a perfectly balanced living space. 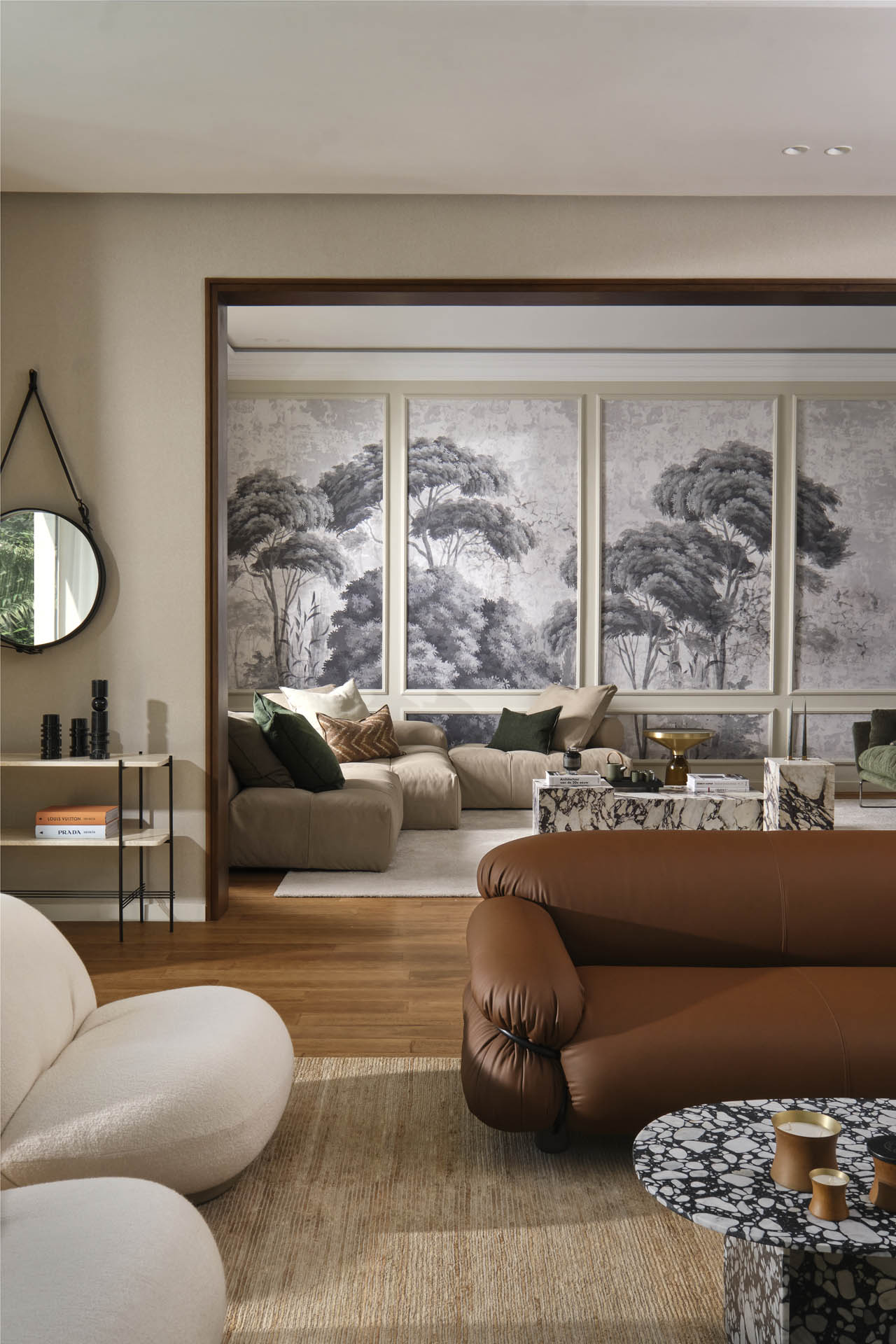 In the prolongation, another area invites visitors to sit on a leather Sesann couch by Tacchini in front of the Pietra ceramic fireplace, or on one of the two white Pacha armchairs by Pierre Paulin from Gubi, which all surround the terrazzo Chap coffee table by Miniforms and a black marble coffee table by Handvärk. On both sides of the double living room, an oak screen wall allows for the option of an open area or separate third space that feature Saba seating and Gubi and Tacchini tables, which are placed on a Soufiane Zarib rug complemented by a Stockholm buffet by Punt with an artwork by Leyto, a Handvärk daybed and the Hebe floor lamp by Ferm Living. “The homeowners wanted clean and light-filled spaces with a warm atmosphere,” the designer explains. Accordingly, neutral and earthy hues were combined with shades of white and beige to provide brightness and make the spaces feel timeless. 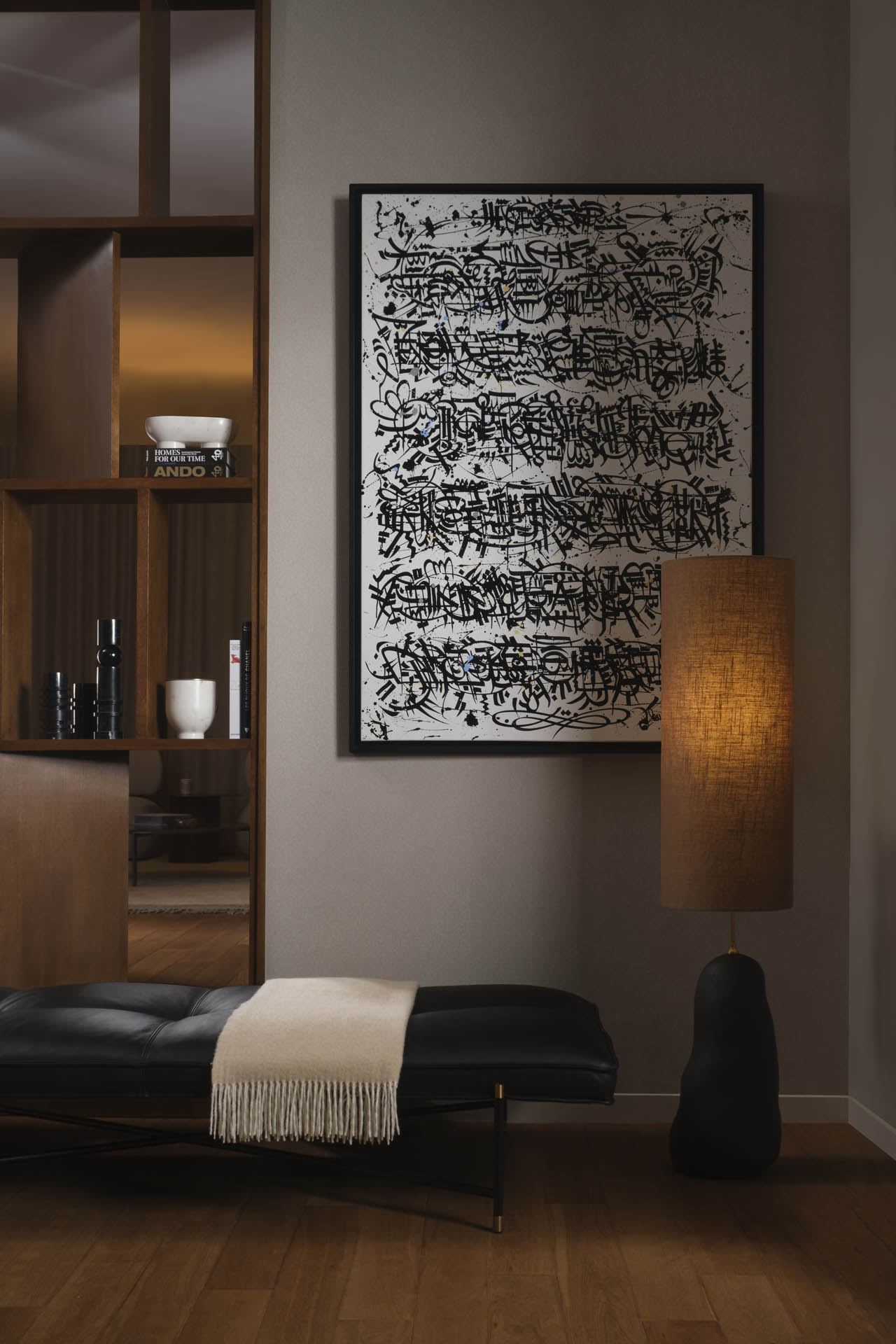 Through the thoughtful selection of materials, Lahlou strove to strengthen visual interest, texture and personality. “The approach consisted of playing with warm and cold [tones and materials],” he explains. For example, the combination of wooden floors and marble stairs results in an interesting contrast. Upstairs, a headboard in burgundy velvet creates a sense of drama in the main bedroom where two smoked mirror panels, a pair of Bell side nightstands in blown glass by Sebastian Herkner, Orb lighting fixtures in brass by Bolia and a wood and ceramic bookshelf add to the mix. According to Lahlou, this project embraces the art of opposites, but it was not always easy to get the homeowners on board. “Initially, the client wanted to keep the old furniture from the house he used to live in that had nothing to do with the new environment and the concept I had in mind,” confesses Lahlou. “I convinced him to change everything, but the challenge became to furnish the entire house in just two weeks as he was on the verge of moving in. Every piece I chose had to be available in stores and coexist within the space by telling a story.” After only 10 months, the project had fully taken shape. “The thing about my job [that] I am most passionate about is transforming a space and making it look like a completely different environment,” Lahlou says.