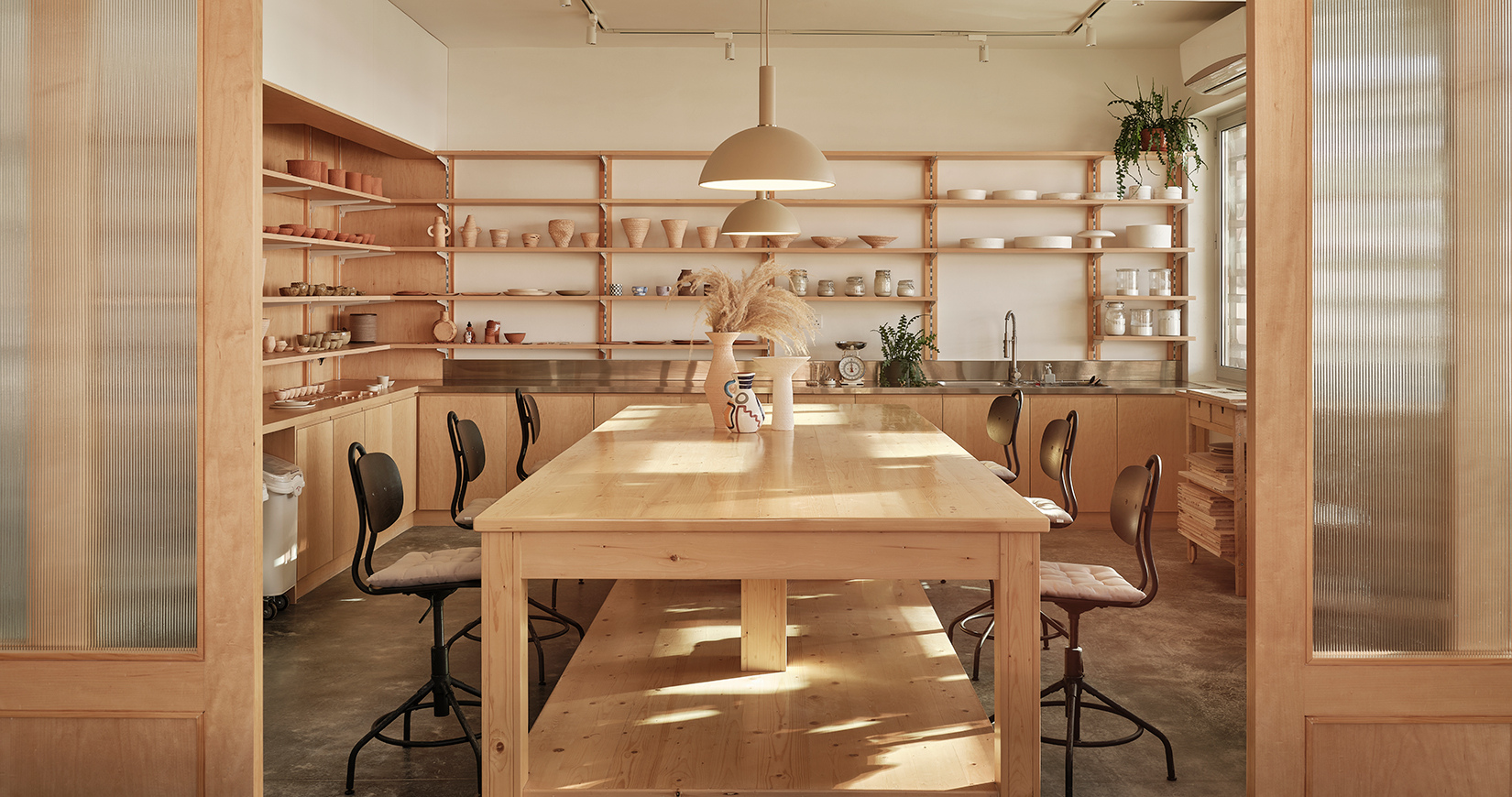 Sitting on the first floor of a 1967 Modernist building in Kuwait City’s textile market is a new ceramics studio, From Mud, founded by ceramicist Aisha Al Saif, whose aim is to make design through clay more accessible to those living in Kuwait. The studio is part of an upsurge of creative spaces that are influencing a wave of regeneration in the Gulf city’s textile market, which is widely known as ‘blokat’. “The building that From Mud now calls home was once the largest shopping centre in the city. It defined a modern urban environment, functioning as a covered market,” explains Kuwaiti designer Rawan Muqaddas, whose eponymous practice – founded three years ago – is behind the pared-back interiors of the studio space.

“Today, we see that the retail vendors have remained on street level; however, the upper floors [of the building] have fallen tired. Today, spaces such as From Mud are shifting the urban fabric and introducing young energy by bringing an audience into [what have now become] neglected spaces. The façade of the building is protected from Kuwait’s harsh sun by concrete plates that one cannot help but imagine as a reflection of the fabric palettes sold downstairs. This was translated into the adjustable shelving in the interior as an ode to the exterior,” the designer adds. 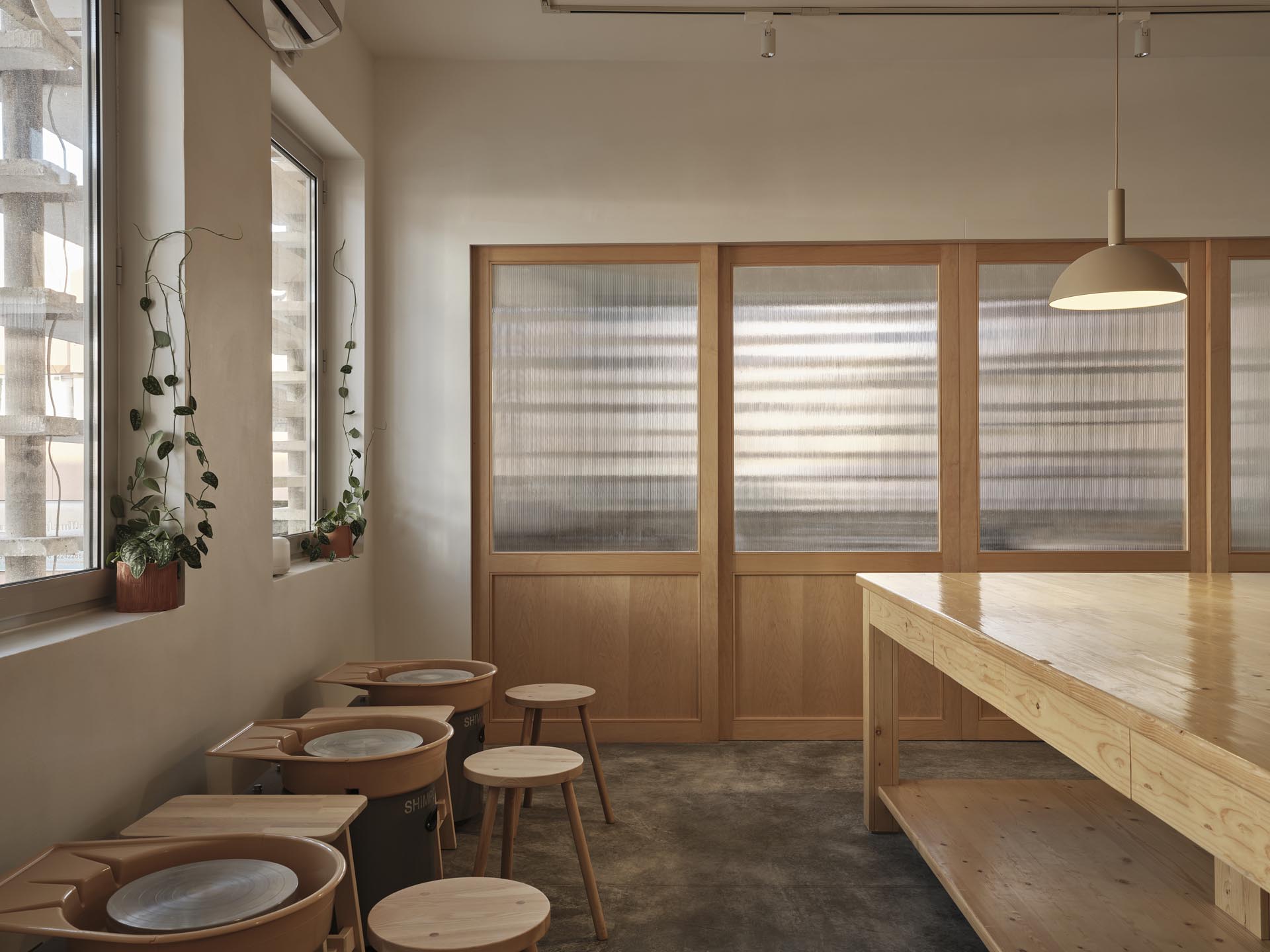 The relaxed atmosphere of the workspace draws inspiration from the simplicity of clay itself, conveyed through clean lines and a soothing colour palette. The idea of movement informed the design process, where Muqaddas observed the various motions taking place while creating with clay, making note of the fluid lines formed by the material itself. The warmth of the space is largely due to the encompassing use of wood, such as the solid and veneered maple wood that is juxtaposed by stainless steel and powder-coated metal in the adjustable shelving system and brackets. 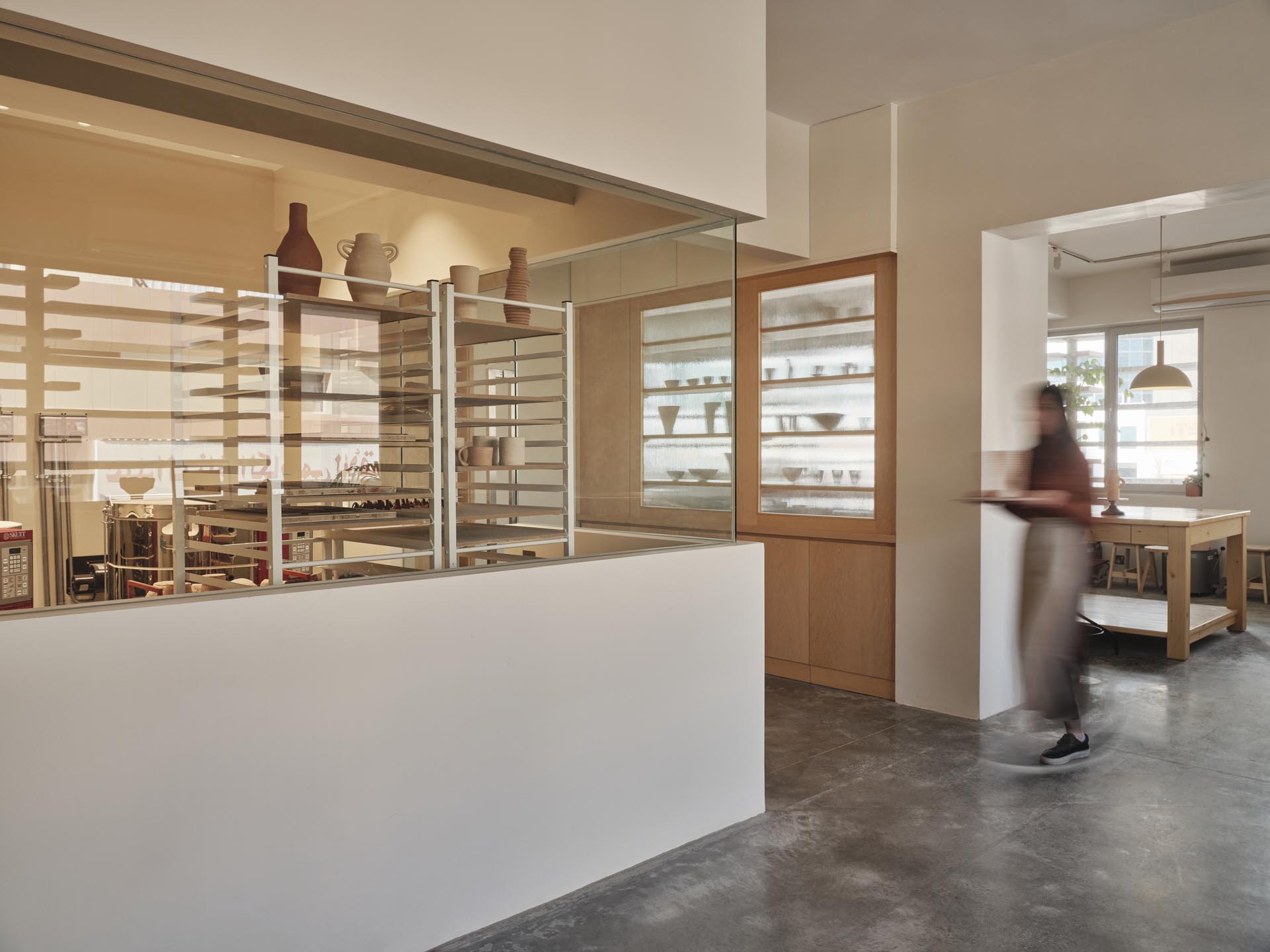 One of the main requirements for the space was storage and shelving, which corresponds to the daily routine of the ceramicist. The studio also includes a kiln room, a semi-private office and a lounge area.

One of the most inviting features within the interiors is the light distribution that mimics the building’s concrete façade and casts linear shadows across space. 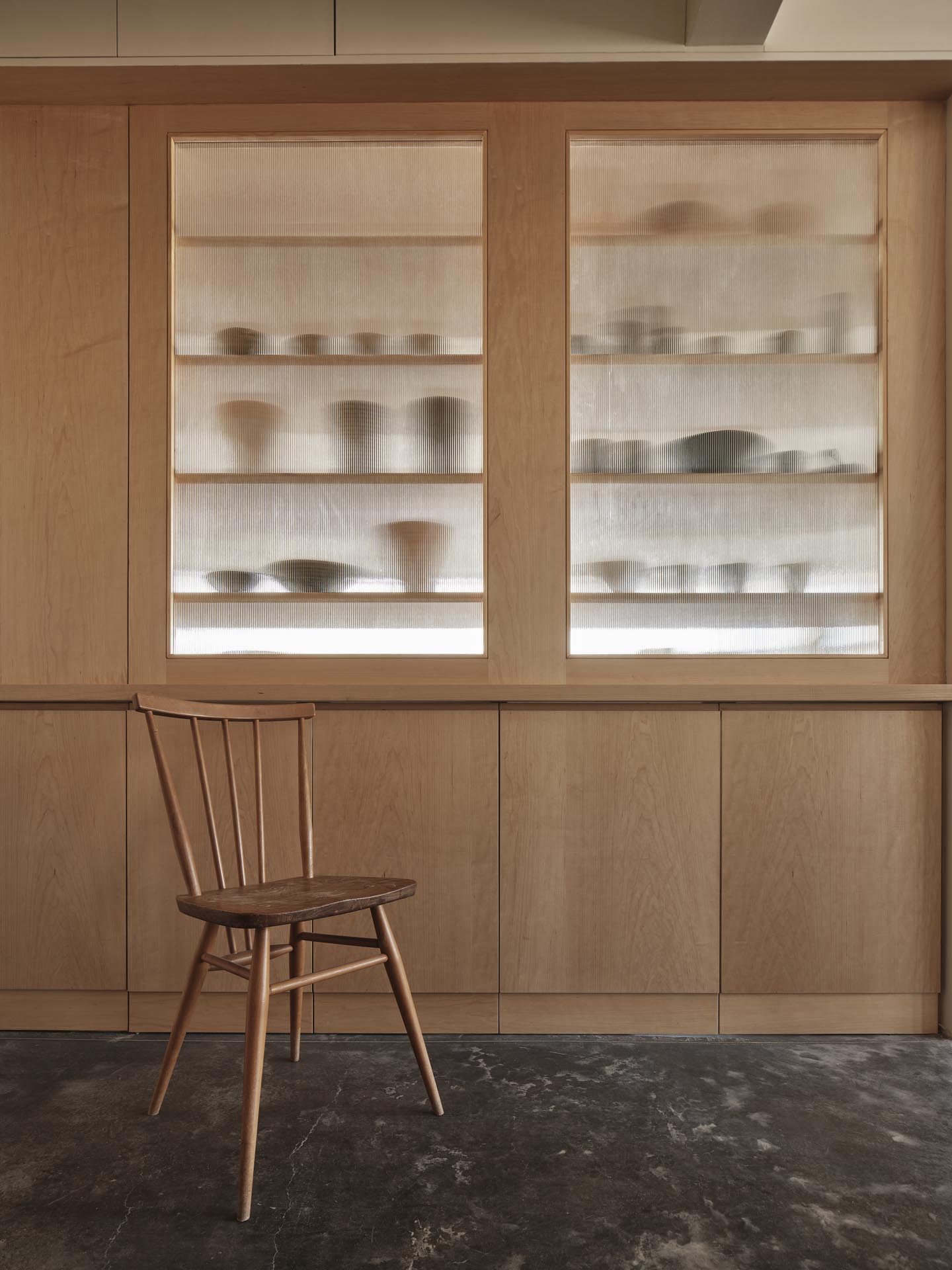 “The emphasis on light was key throughout the design, as the importance of natural and adequate light while crafting clay [is paramount],” Muqaddas says. “By reinterpreting the building’s façade into the rhythm of the perimeter shelving, you begin to see the interplay and juxtaposition of the façade’s shadows against the interior at different times of day. The fluted glass was then introduced to create translucency and allow for privacy where needed.” 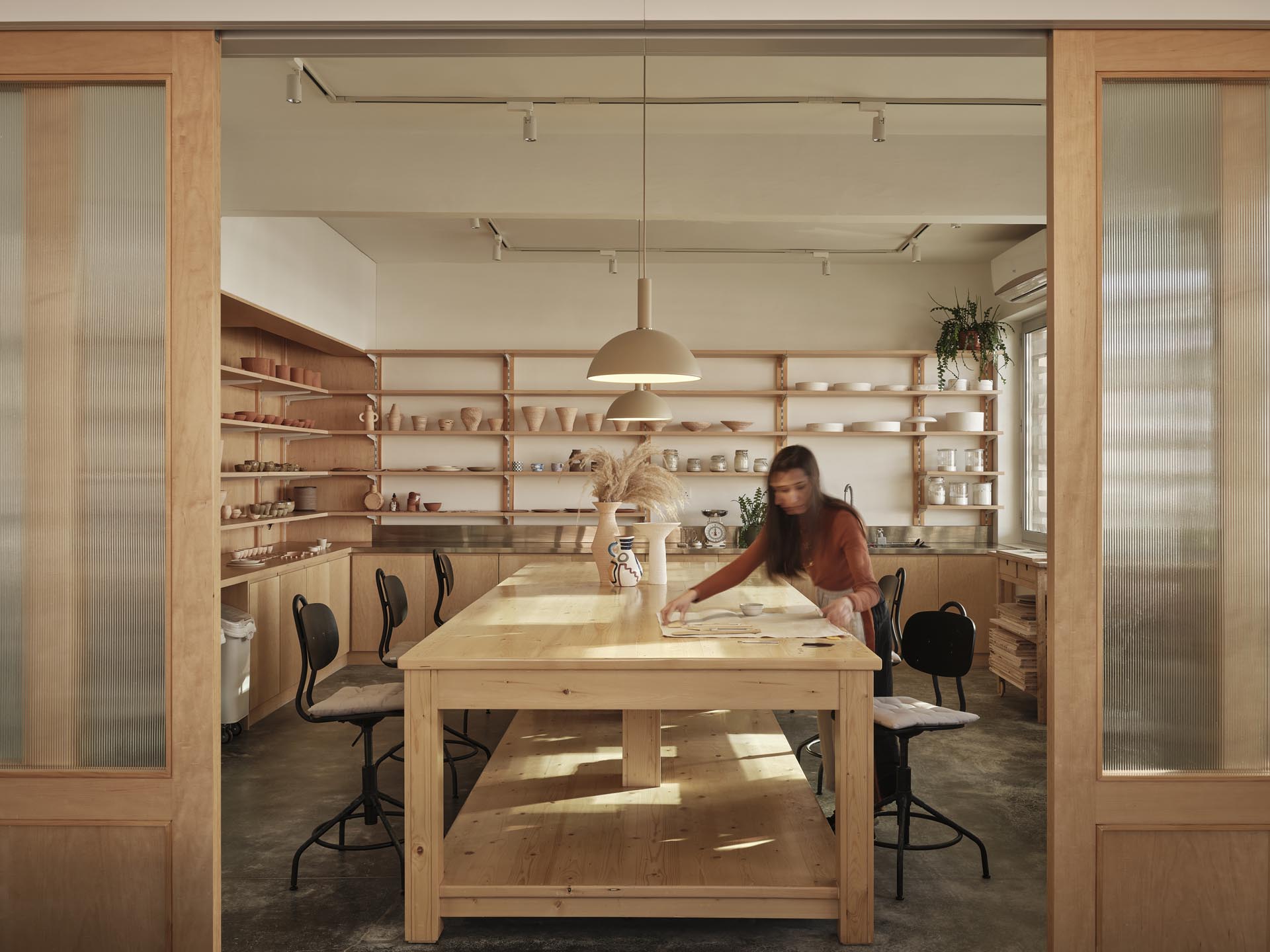 Muqaddas adds that the approach taken with interiors of the ceramics studio mirrors the ethos of her design practice, which honours the team’s love “for the rawness of simple things” through a culmination of minimal and timeless spaces that evoke emotion.