Top designers complete the renovation for one of the world's most iconic hotels. 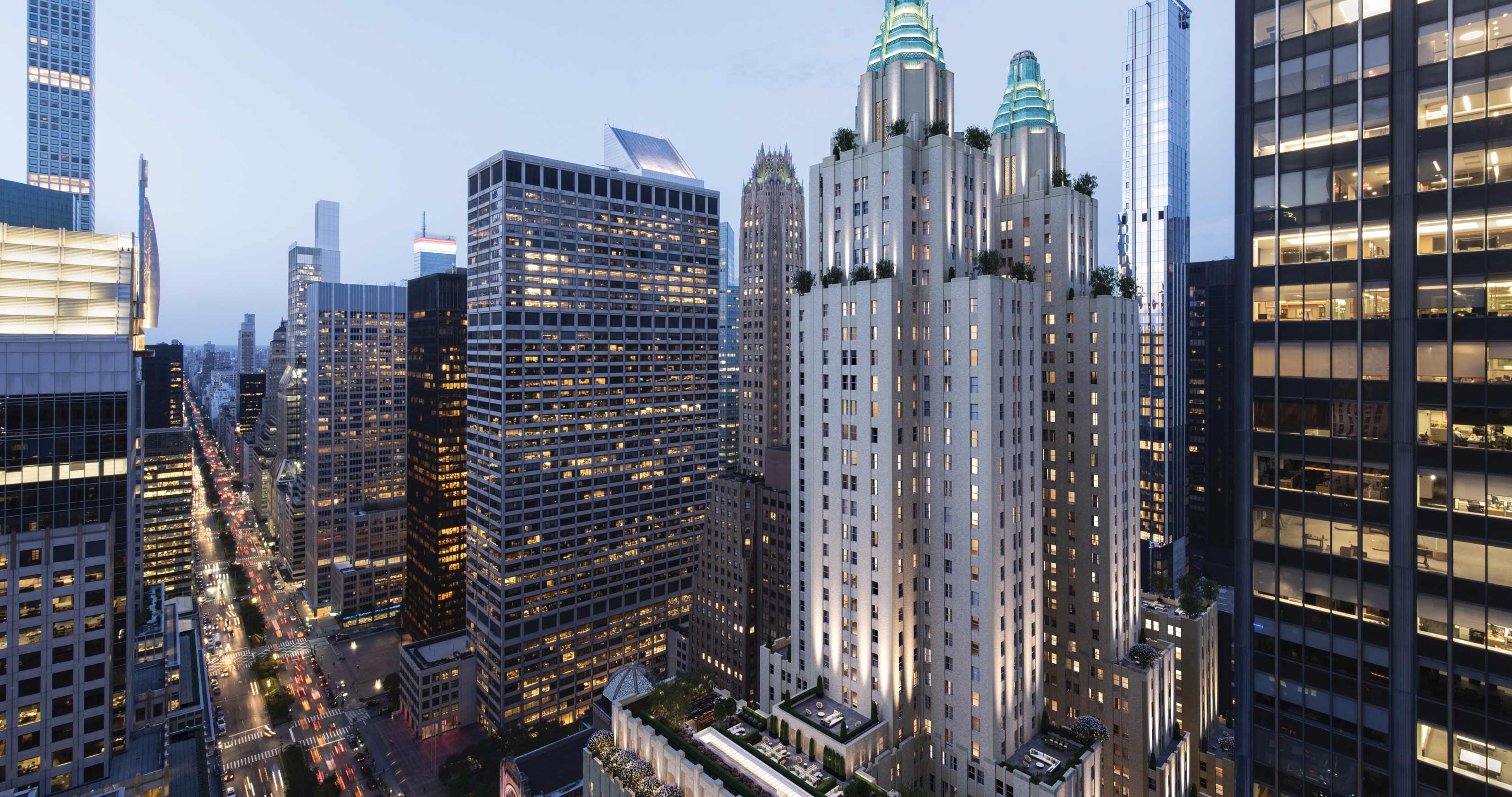 Leading architects from Skidmore, Owings and Merrill (SOM), leading interior designer Jean-Louis Deniot and leading French interior architect Pierre-Yves Rochon not only top the billboard of the world’s best designers – they have been hand-picked to ensure that one of the world’s grand dámes the Waldorf Astoria New York, is given a glamorous and sophisticated facelift.

The high-profile design team has the delicate task of completely remodelling the 47-floor (190-metre-high) brick and limestone building that was designed by architects Schultz and Weaver in 1931. When it first made its debut, the hotel was the world’s tallest building.

Currently owned by the China-owned Dajia Insurance Group, the Waldorf is said to be the largest privately-owned landmark in New York City. 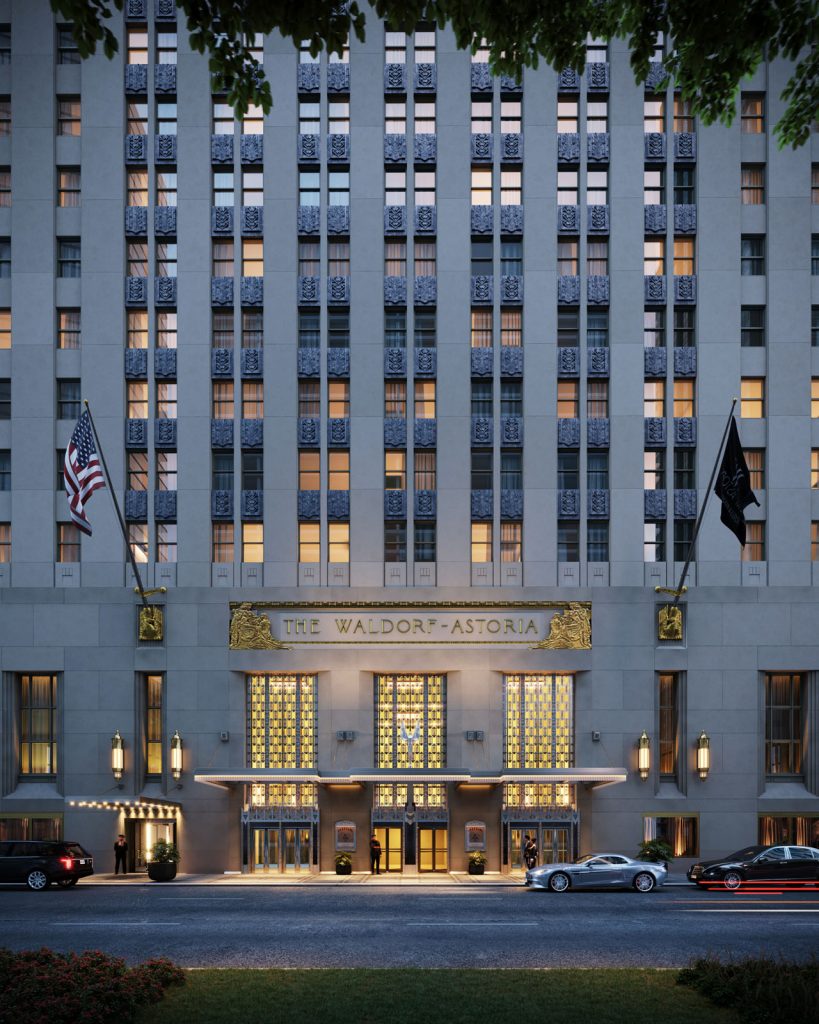 The 153,000-square metre property was closed in 2017 and is to re-open in 2022 following the extensive programme, which involves creating 375 luxury condominiums and the same number of hotel rooms from the space initially allocated to some 1400 hotel rooms.

Over the decades The Waldorf Astoria New York has had numerous Hollywood divas, stars and musicians as long-term residents, including Frank Sinatra, Elizabeth Taylor and Angelina Jolie. Cole Porter, who called the hotel his home for over three decades, wrote his famous You’re The Top number from his musical ‘Anything Goes’ while living there.

The property’s famed kitchens invented the world-famous Waldorf salad and Eggs Benedict. From the outset, the motto ‘The guest is always correct’ was standard practice.

Yet this will be the first time that current A-list celebrities and wealthy investors will be able to own a slice of this coveted Manhattan property.

“We have embraced a profound responsibility as the stewards of the Waldorf Astoria and assembled an incredible team to bring an unmatched residential product to the New York City market,” said Andrew Miller, CEO of Dajia US. 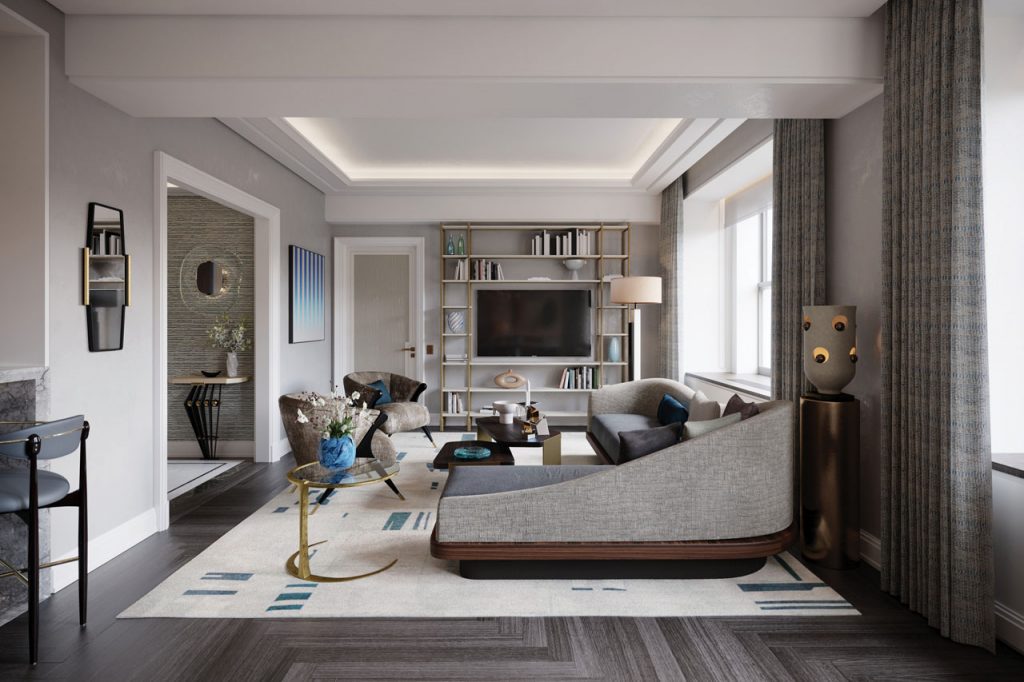 “For almost 100 years, the Waldorf Astoria has been New York’s ‘unofficial palace’, and was famously anointed by Conrad Hilton as ‘The Greatest of Them All.’ Now, with residences for sale for the first time, buyers from New York and all over the world can call it home,” Miller added.

The developers are also hoping that the exclusive properties will be appreciated by discerning Middle Eastern investors.

The renovation of the building has been extensive, and the design team was challenged with recreating a high-tech modern interior and exterior while remaining true to the essence of the property and its Art Deco origins.

Skidmore, Owings & Merrill (SOM) – one of the world’s most highly revered architectural firms, which has been involved in significant buildings such as Dubai’s Burj Khalifa, the world’s tallest tower – was commissioned to work on this significant project.

Established in 1936, SOM has a reputation for innovation, unparalleled design and sustainability. 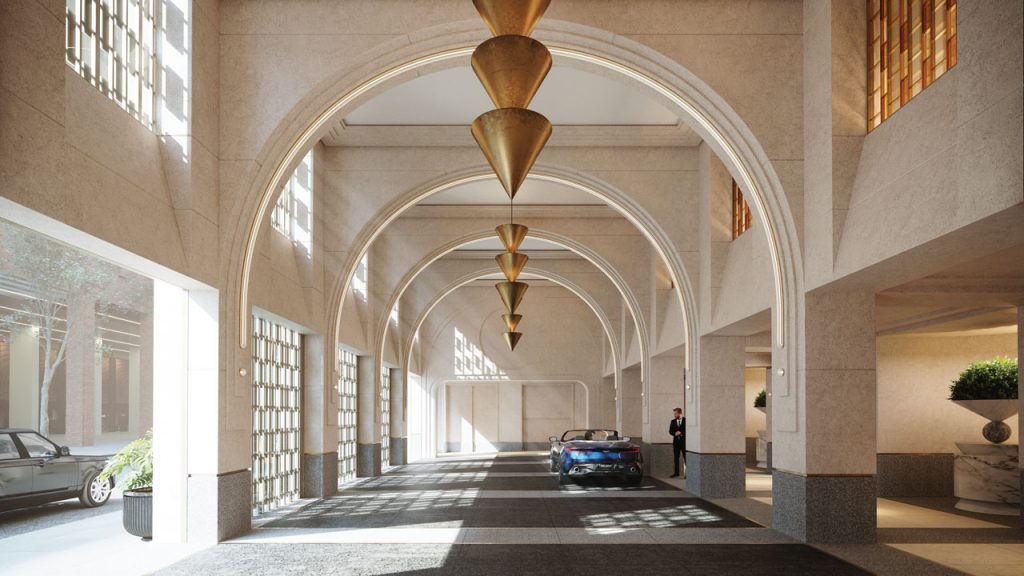 Frank Mahan, Associate Director of SOM commented: “It is both an honour and an enormous responsibility to be overseeing this next iteration of the legendary Waldorf Astoria New York.

“We started this project from a place of profound respect for the building’s heritage, and detailed research into its history, including all of the changes made to it over the years. We are not only returning the building to its former glory but also adapting it and making it relevant for future generations.”

Over the decades the hotel has undergone several minor interior changes, which meant that the design team had to strip much of those back to discover the original spaces.

Over 5000 new double-glazed, soundproofed windows have been installed; and new entrances have been created for The Towers residents and deliveries, to ensure a smooth and elegant flow in and around the prestigious building.

Areas in the original building’s turrets – once used as mechanical rooms – have been converted into two luxurious 600-square metre penthouses. These exclusive new triple-height, four-bedroom spaces will offer unique, never-before-seen views of the skyline in parts of the property never before inhabited. 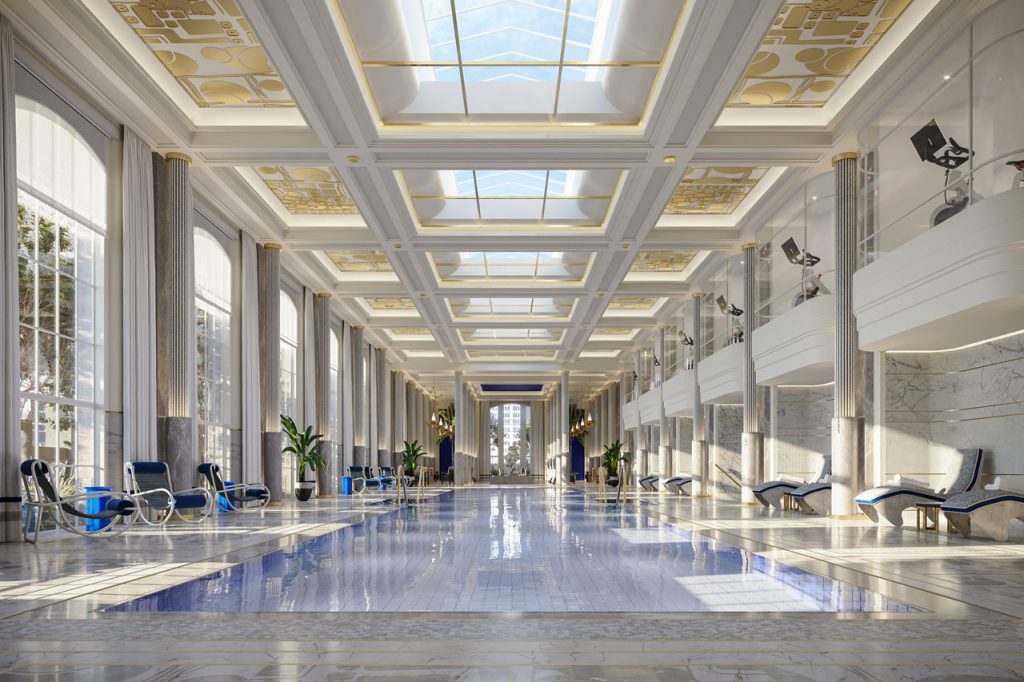 Much sought-after, Deniot is a favourite of design magazine editors and probably one of the world’s most published interior designers. He has been entrusted with creating contemporary modern interiors for the luxury condos. Renowned for his attention to detail, Deniot has designed many of the fixtures – like the panelled interior doors adorned with bespoke bronze hardware.

Deniot commissioned customised cabinets from Italian firm Molteni&C. He sought inspiration from Art Deco and associated shapes for the vanities, the marble kitchen work surfaces and the polished nickel fixtures.

He also created a distinctive pattern for the mosaic work, which was inspired by an element from the original Waldorf Astoria New York’s interiors. 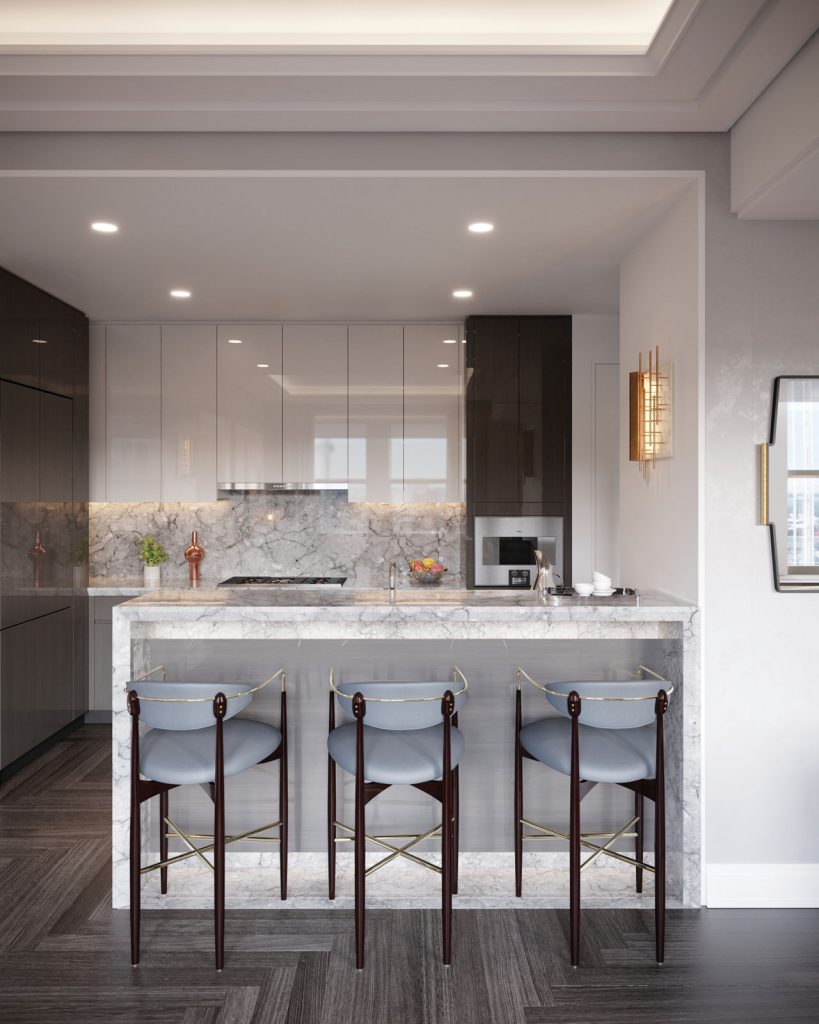 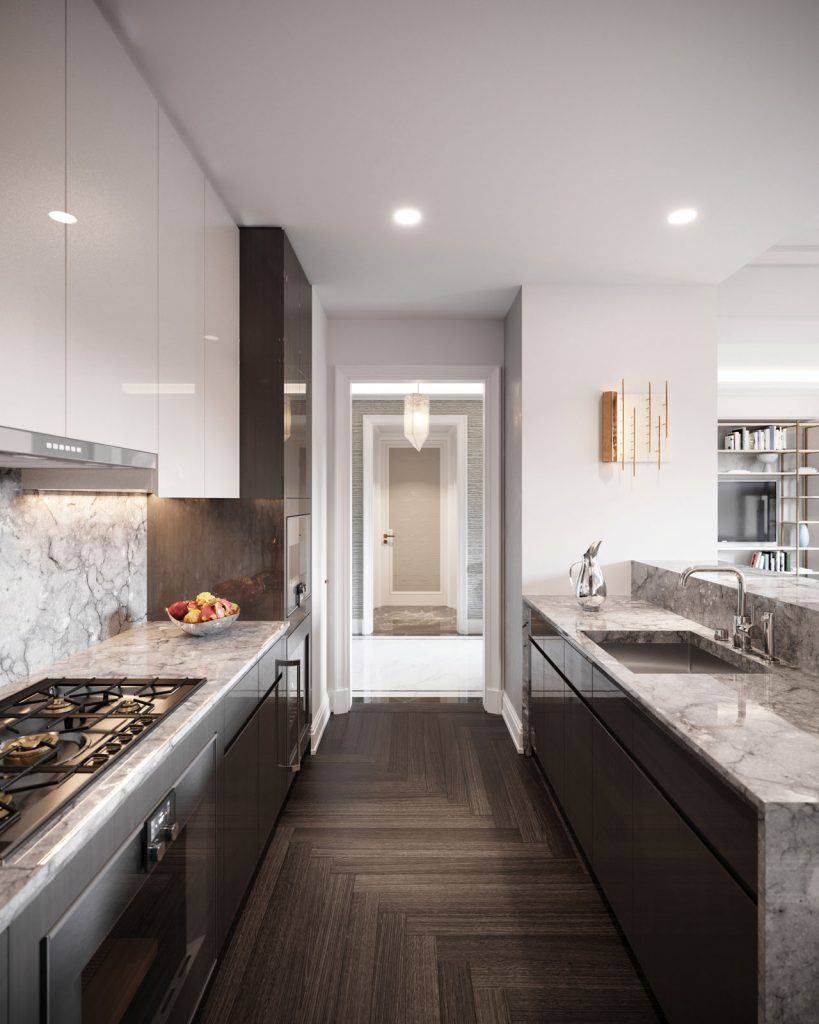 Top-of-the-line Gaggenau kitchen appliances have been integrated into the kitchen spaces.

“The interiors will reflect the magnificence of the past, mixed with today’s great sense of energy. They will be grand and playful, all highly inviting, with many elements of surprise and excitement,” Deniot said, adding that while adding that he is keen to maintain the Waldorf Astoria’s enduring and lavish aura.

Adding to the desirability of the condos are the three-metre-plus-high ceilings, which create a sense of additional spaciousness.

Most of the luxury condos are two-bedroom models, which are being marketed from US$1.7 million.

A unique integrated concierge closet is located at the entry of each of the condos, from which residents can collect their deliveries.

Deniot also created 4600 square metres of residential amenities – including the gym, spa and pool – as well as the co-working spaces.

The indoor pool has been placed under a double-height ceiling featuring a magnificent skylight from the original design; for the past 70 years, the window has been obstructed. 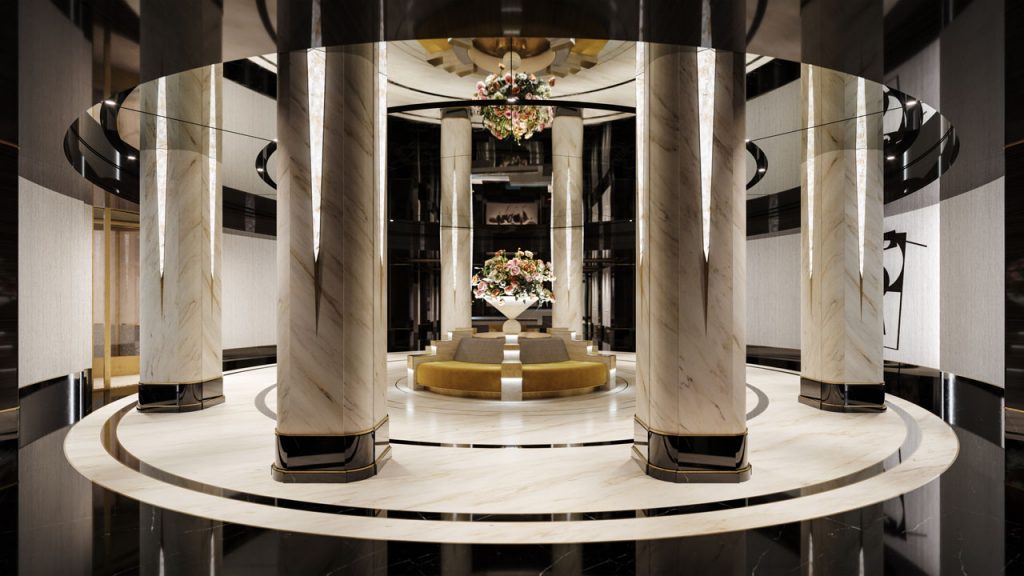 Celebrated Paris-based designer Pierre-Yves Rochon is the mastermind who brought the über-prestigious Four Seasons George V in Paris and the London Savoy back to their former glory.

“The Waldorf’s beautiful architectural character from the American 1930s is the perfect mix of classic and modern, and the ideal setting for a timeless luxury hotel,” said Rochon.

“It has always had a special place in my heart, and working with this team to respect the history of the space while bringing it into a new era has been a dream come true.”

Working in collaboration with the team from SOM, Rochon has brought new life, vigour and glamour to the public spaces – which now ooze with a fresh sense of occasion and glamour.

He has also given the restaurants and bars and the 375 luxurious guest rooms and suites new vitality while respecting the original style.

Rochon has installed state-of-the-art lighting schemes and new windows, opening up and breathing light into hitherto dark areas, such as the Lexington Avenue lobby.

“We are bringing it back to life – to a place where you want to stay,” he added.

Rochon is quoted as saying, “You feel it’s a change without change. From an architect’s point of view, that means we are going to respect all the rooms, while it will be a completely different destination.” Meanwhile, several items synonymous with the property’s history – including the Spirit of Achievement statue, the famous World Fair Clock and even Cole Porter’s original Steinway piano – have been restored, in preparation of the grand 2022 re-opening.

Over the next 18 months, the hotel will be furnished and decorated with items from the most prestigious global design houses. An art collection curated by Simon de Pury is being selected and will feature the work of emerging artists from all over the world.

“We chose artists from all over the world, whose spirit we believe in. These artists will help to breathe new life into this historic space,” said Simon de Pury.

The stage is set and it is just a matter of time before the well-heeled Chinese, Arab and Russian residents and the world’s A-list celebrities move into and enjoy life in one of the most iconic addresses on the planet.

This story was originally published in the May 2020 issue, which you can read for free here. Housing a music lounge and a cigar lounge, the rooftop terrace, created in collaboration with Read more >