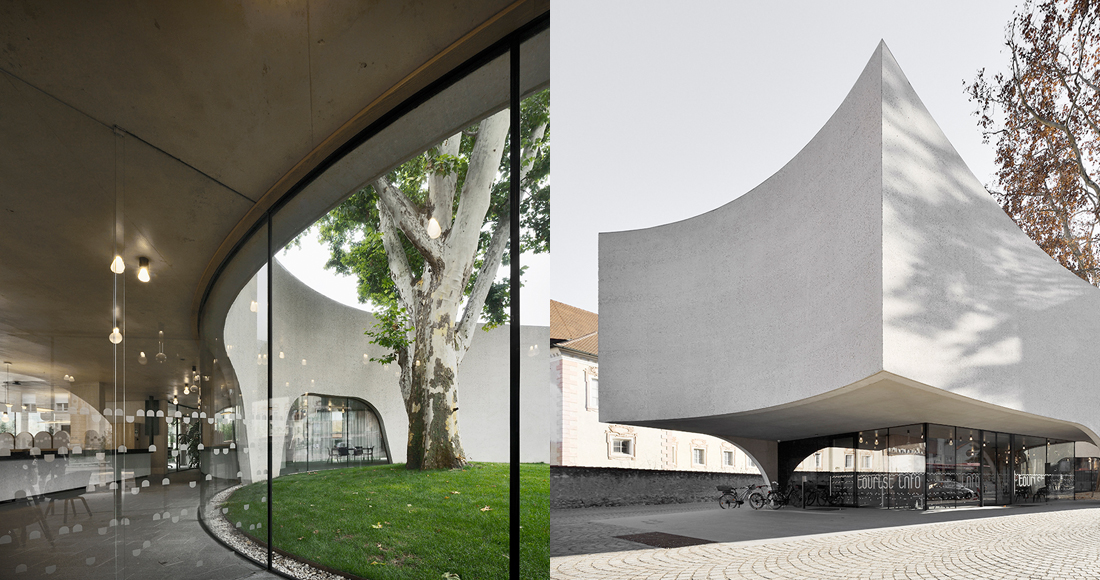 Italian architecture firm MoDusArchitects has presented the recently completed TreeHugger building, which won an international competition in 2016. TreeHugger is the new Tourist Information Office building of the city of Bressanone in Bolzano, Italy.

The eye-catching concrete building is located just outside the historical centre of the Bressanone, adjacent to the famous Bishop’s Palace. TreeHugger is described as “the last episode in a series of ‘architectural homicides’ dating from the 1800s up until the 1970s.”

Much of the building is elevated, freeing up the ground level to provide a public space. Visual connections have been made to the Palace and the ancillary Chinese and Japanese pavilions marking its garden’s corners. The exotic, sinuous curves of the pavilions are re-interpreted in TreeHugger, which forms a new gateway for the city.

TreeHugger twists and turns around an existing monumental tree, forming an inseparable connection between nature and edifice. The tree trunk serves as a fulcrum, with five arched spans reaching outwards.

The 9-metre-high walls were cast from one flow to achieve a seamless vertical surface. They formed a ring, into which concrete plates were then poured.

The ground floor of the building houses the public spaces and info booths. It is almost entirely glazed to allow maximum transparency and permeability. The upper floor houses the administrative offices among a sequence of convex surfaces.

TreeHugger sits perfectly within its historical context while serving as a magnet devoted to the sharing of local culture.