The use of curves is prevalent everywhere; including in the new staircase and the fireplace 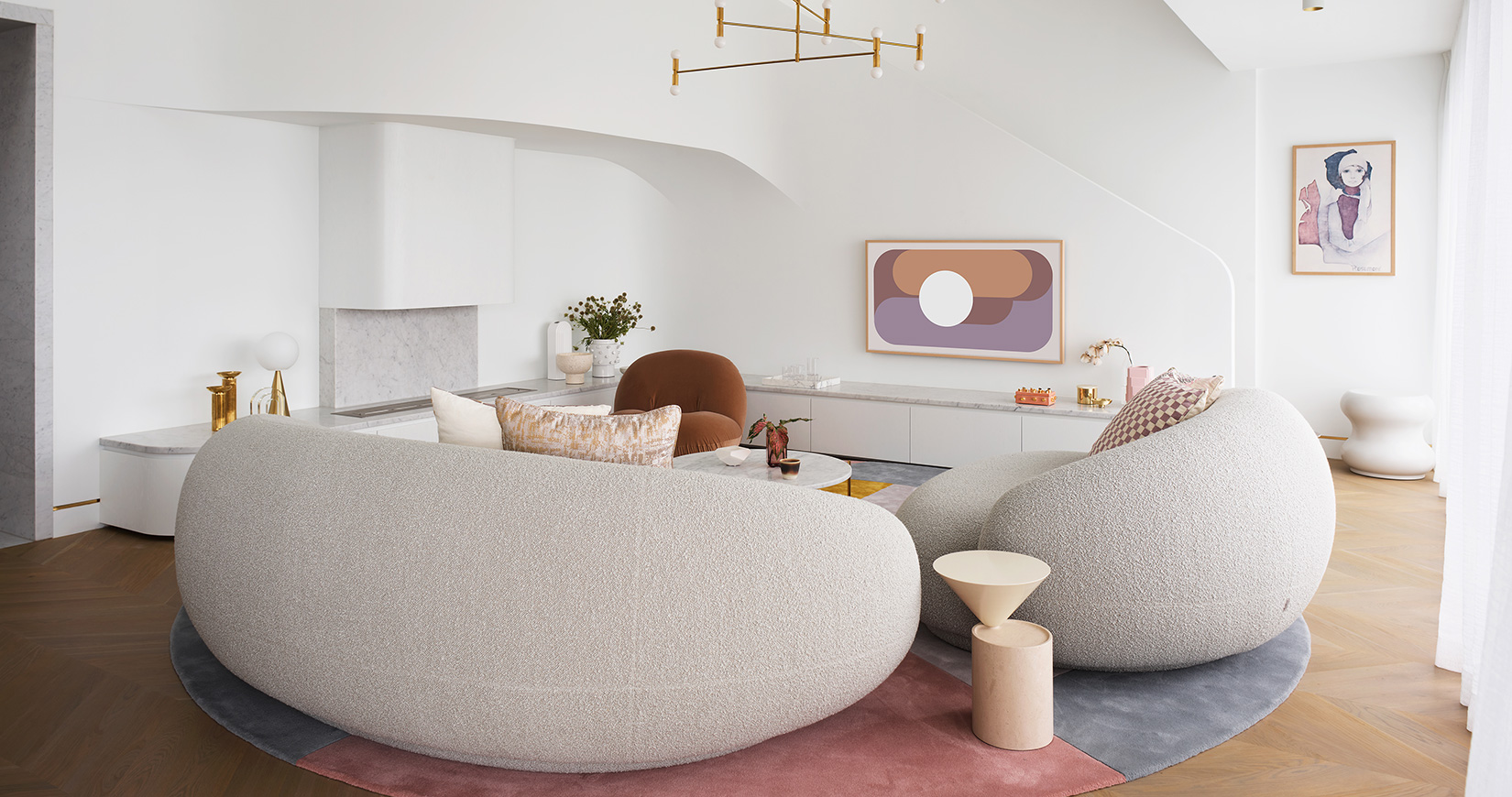 Having ‘plenty of curves’ was the key element in the brief for this striking penthouse. Situated in a harbourside suburb in Sydney, Australia, the apartment – which sits within a redevelopment of historic structures combined with new buildings to make residential dwellings – was transformed by Greg Natale for a couple with two teenage sons. Both the iconic location and the owners immediately convinced the interior designer to embark on a journey that not only included the creation of a new aesthetic for all the spaces within but also structural work. Among some of the bigger changes was the staircase, which now occupies a corner of the living room. It was previously located in the middle of the three-bedroom apartment; its move has allowed the master suite to be expanded to become a comfortable refuge. Organised across two levels, the interior spaces comprise a 145-square-metre ground floor and a 52-square-metre upper storey, plus 75 square metres of exterior areas (57 for the ground floor terrace and 18 for the first-floor balcony).

The use of curves is prevalent everywhere; including in the new staircase and the fireplace, as well as in the built-in low bench and the cabinetry that wraps around the walls in the living room, which is furnished with two Tacchini Julep bouclé sofas from Stylecraft, a Gubi Pacha lounge chair from Cult and a Gubi TS coffee table from Ownworld, which all sit on a custom round Despres rug by Greg Natale – influenced by the work of painters Sonia and Robert Delaunay – from Designer Rugs. 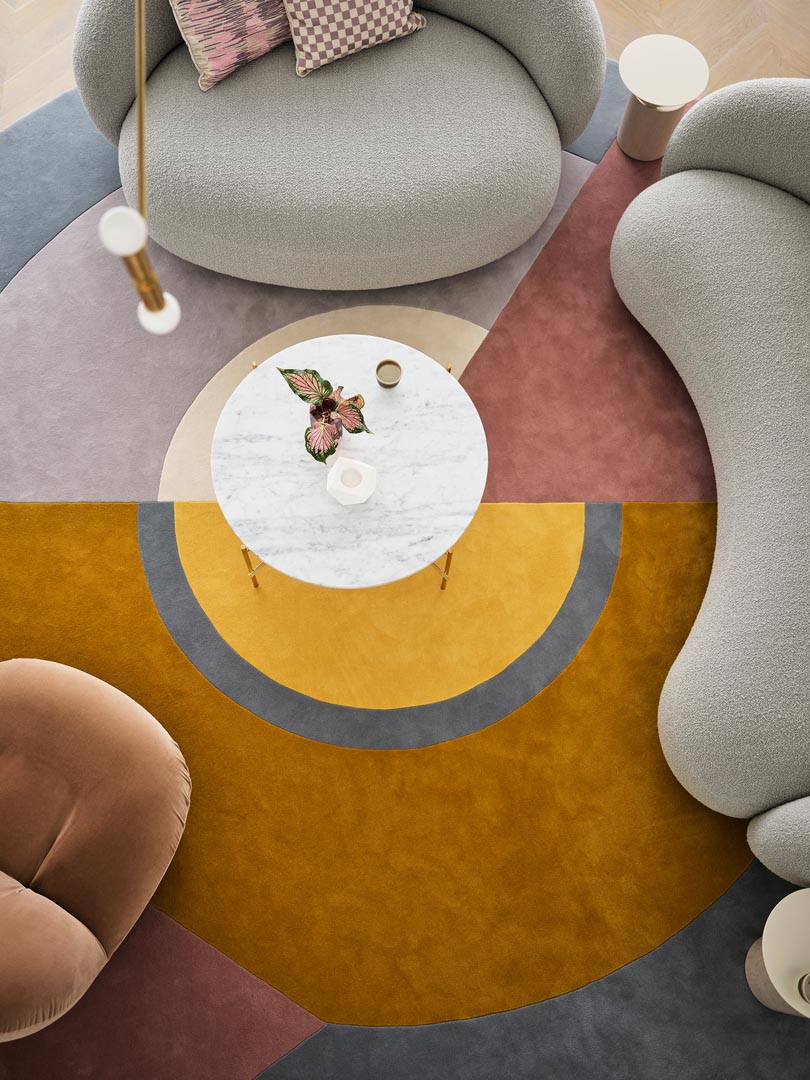 “I was primarily inspired by the curves we created architecturally in the home,” Natale says. “This directly informed our furniture and decor selection.”

The Gubi dining chairs and hand-carved grey Carrara marble kitchen island also emphasise the presence of the smooth curves, resulting in a feminine and delicate look. 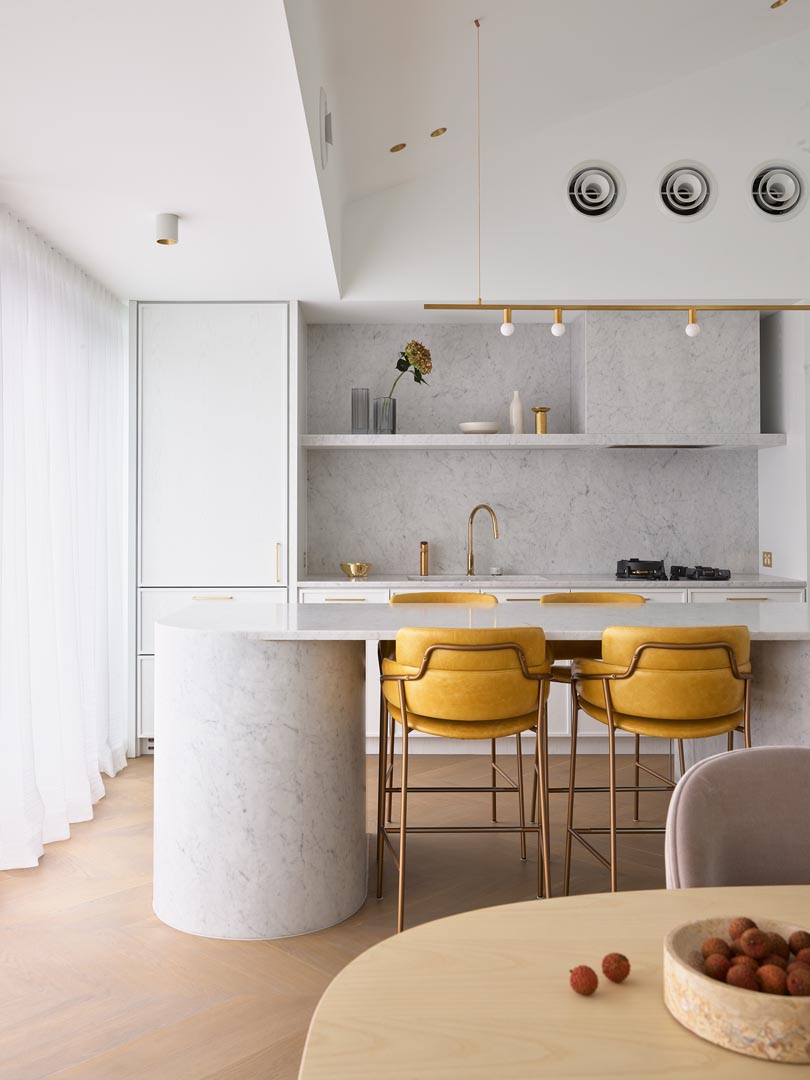 “We wanted to show how interior design can create its own language of line to shape a home’s character,” says Natale. “The curves that wind their way in the living area set the scene for a cocooning design that seamlessly connects spaces and enhances the apartment’s flow. This continues in the lines of the ceiling and floor in the master en suite, in the bathroom walls, where the curves are highlighted by the mosaic finger tiles, and in the softly rounded furnishings.” 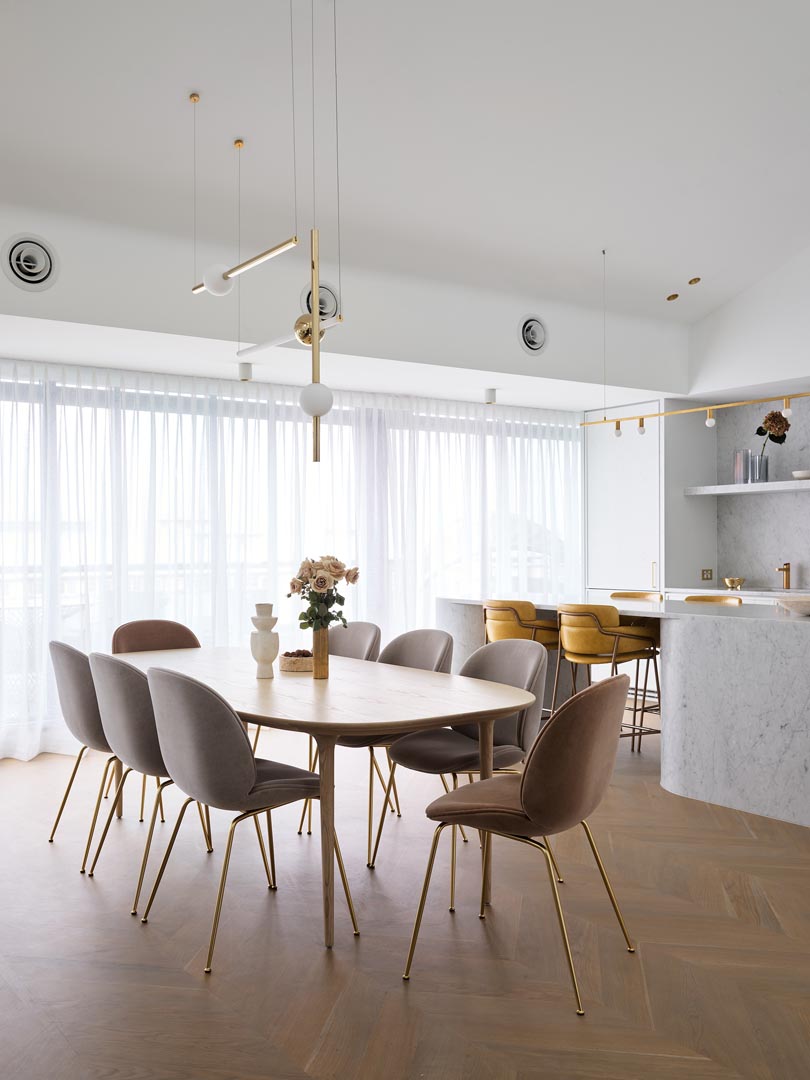 A Gubi Revers sofa from Cult, an E15 Enoki side table from Living Edge with the Laguna 37 table lamp from Artemide, the custom Rateau rug by Greg Natale from Designer Rugs, the Aerin Corvo table from Palmer & Penn and the Flos Mini Glo Ball sconces from Euroluce, as well as the Ava freestanding stone bathtub, are just some of the stylish pieces that make the main bedroom and its bathroom a peaceful oasis. 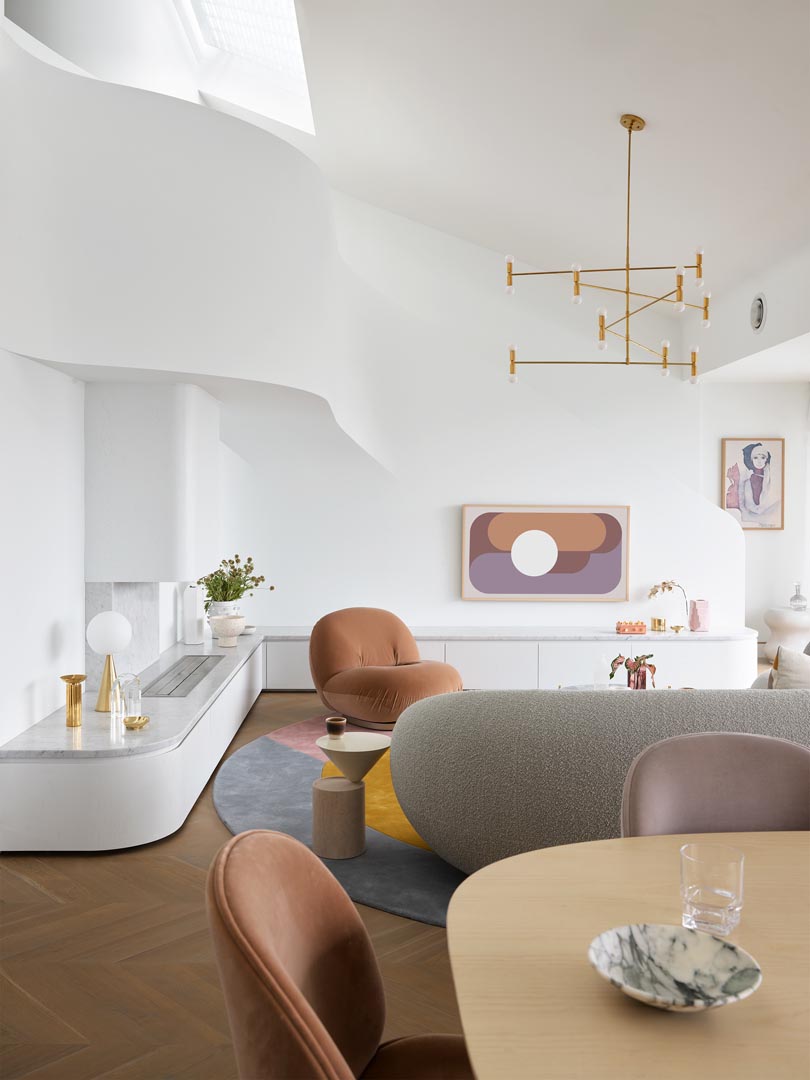 In terms of colours, Natale focused on warm tones throughout the penthouse. Grey, pink and yellow touches perfectly complement the white walls and ceilings, as well as the blond solid oak floors. 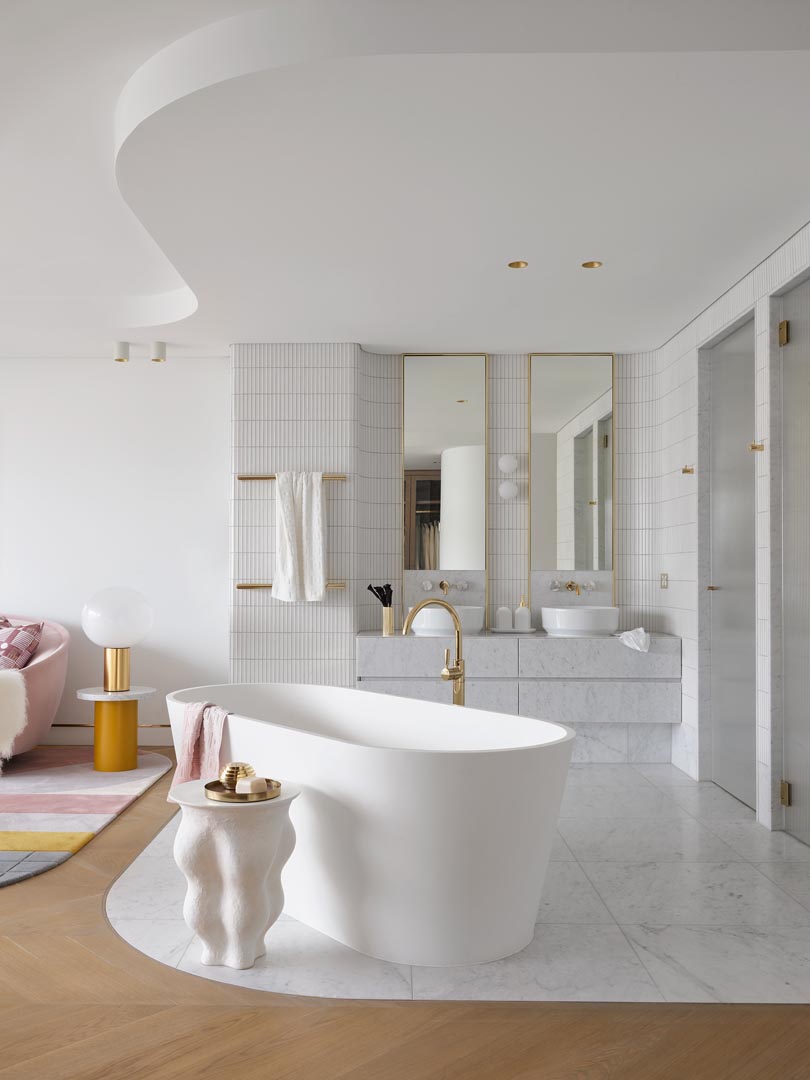 “We wanted to convey a light, bright and contemporary feeling in the spaces,” Natale shares. “Natural materials like Carrara marble and oak were used as an added luxurious layer. This project showcases how a delicate palette can make a subtle yet powerful impact.” 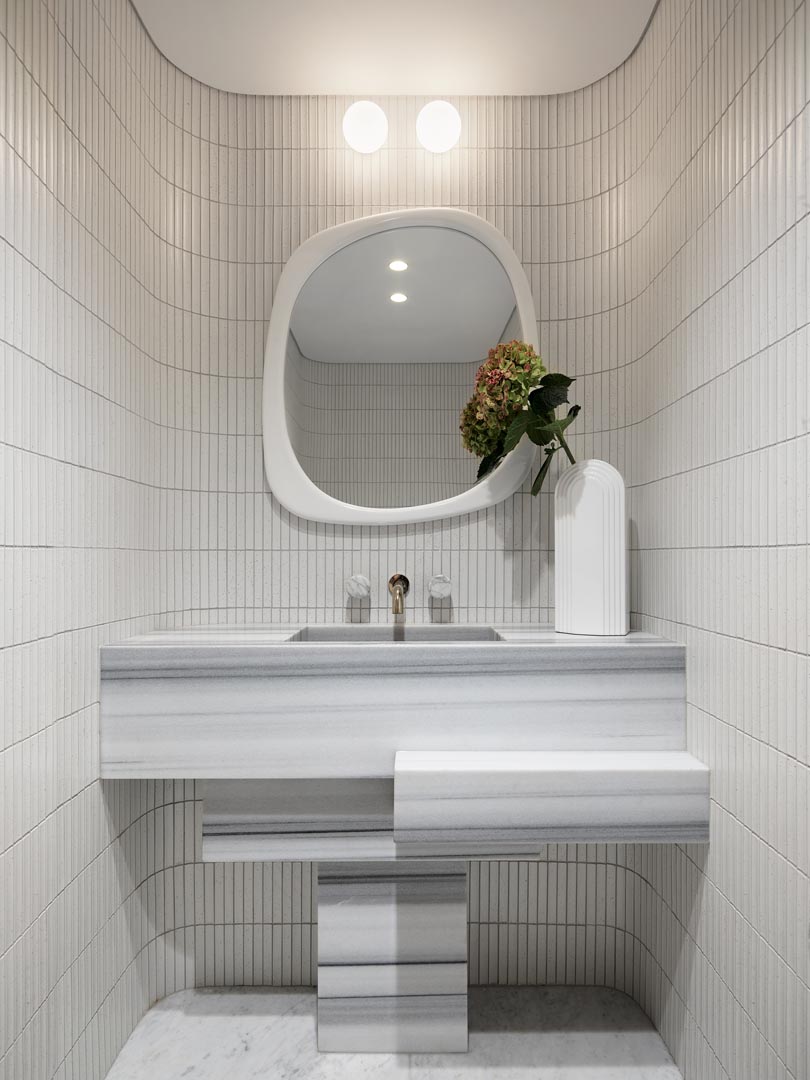 Natale also took into consideration the increasing necessity of designing in an eco-friendly manner. “Sustainably sourced materials contribute to an environment stripped of harmful emissions and toxins,” he notes.

Featuring modern European furniture and reflecting an Australian eye, this young and refined apartment has a unique character that fits the open spirit of Sydney. “Elevated by the gleam of brass accents, the design is a celebration of sophisticated colours and contours,” Natale concludes. 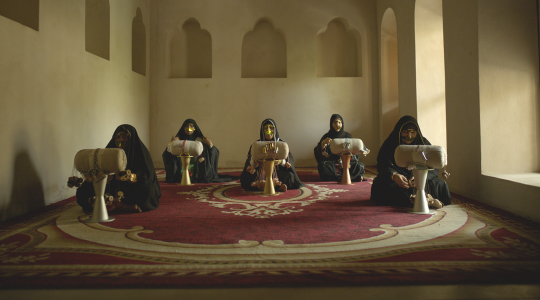