Set inside the Opus Tower in Dubai’s Burj Khalifa district, the newly opened ME Dubai hotel by Spanish brand Meliá is the first hotel to attribute both its interiors and its architectural design to Zaha Hadid. 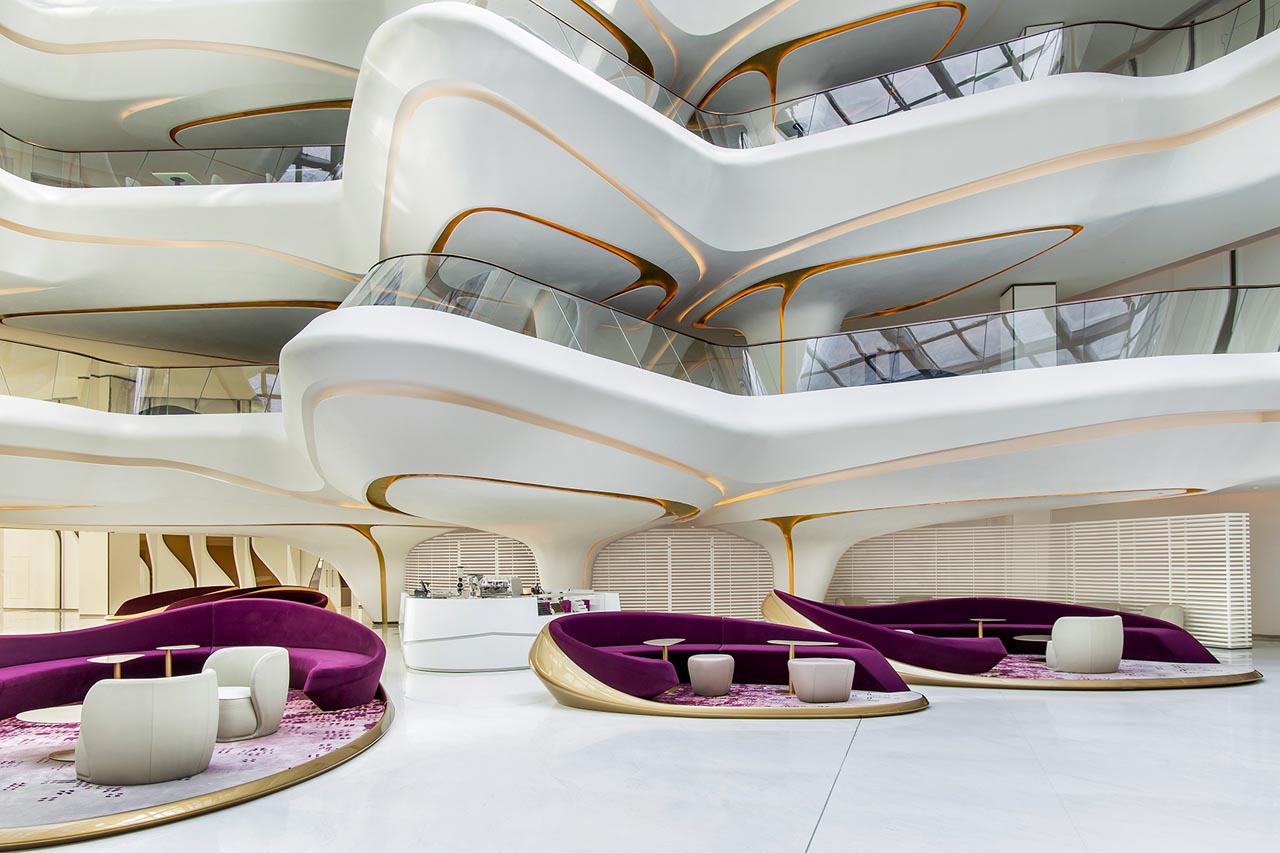 From the outside, the giant cube-shaped building is clad in mirrored glass, with an amorphous void at its centre – an effect created by connecting its two towers from the top and bottom. ME Dubai sits just under the void, featuring 74 rooms and 19 suites as well as various dining offerings and The Atrium, an immersive space at the centre of the hotel that acts as a lobby and a welcome area, as well as a space for entertainment. 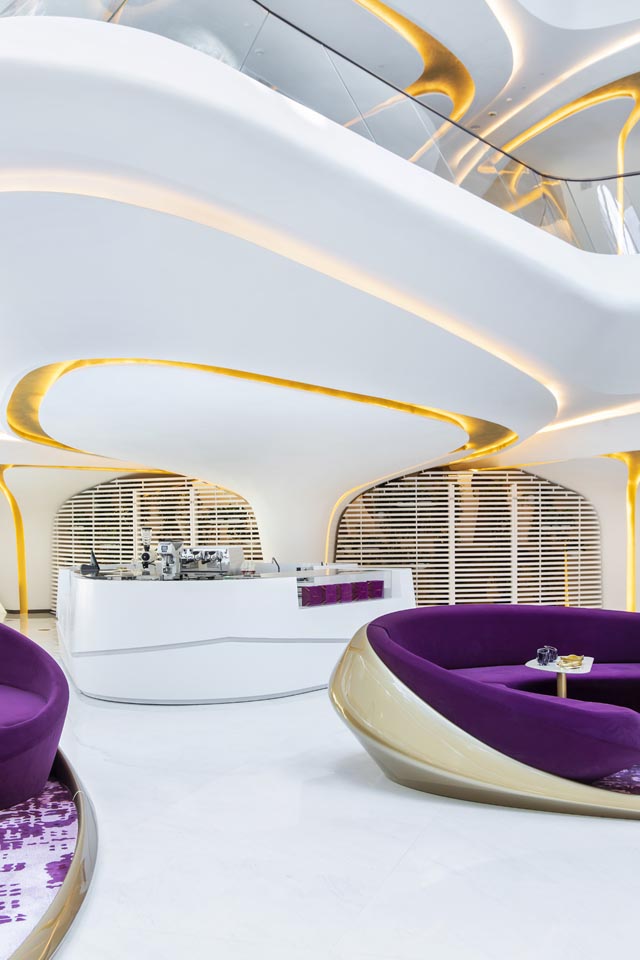 With curving sculptural balconies of the hotel jutting out into The Atrium, the expansive space features gleaming white marble floors and plush curved Ottomans that are upholstered in a rich burgundy hue and were designed by the late Hadid as part of Zaha Hadid Design, the firm’s design arm. 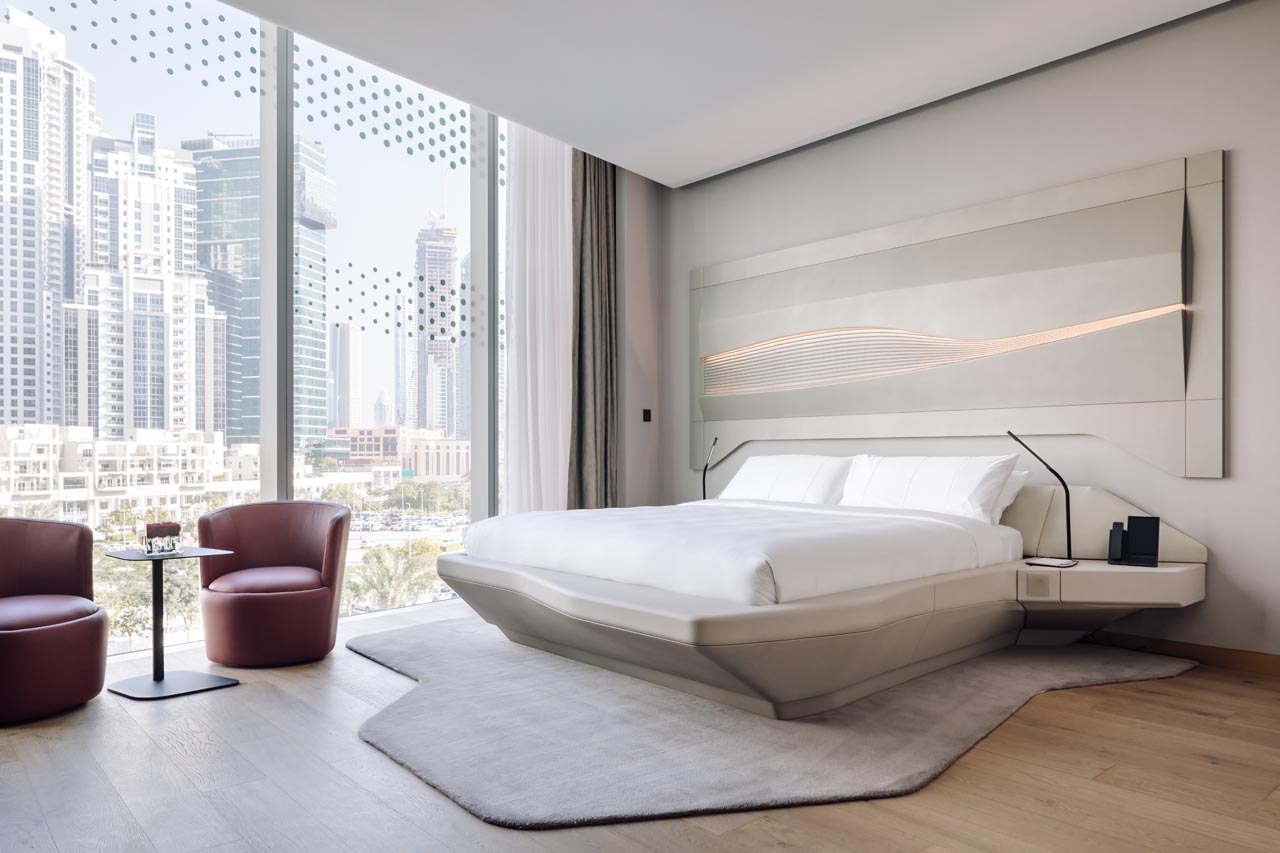 Read more: Explore designs by Zaha Hadid for ME Dubai

All the furniture within the hotel was designed or selected by Hadid herself – including the navy-blue benches set on the balconies, which feature curving gold frames that are part of Zaha Hadid Design’s Petelinas collection. 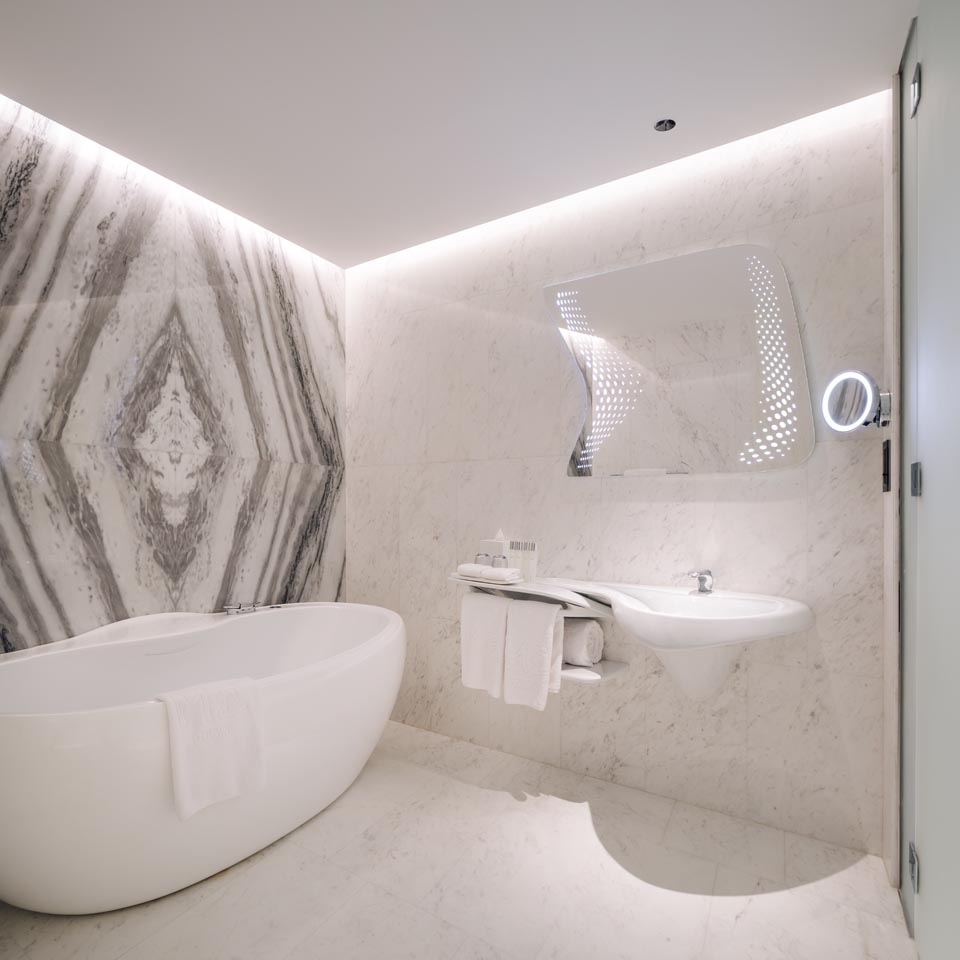 The guestrooms feature bedrooms with Hadid-designed beds, complete with sculptural frames projecting from the wall. Each room is inspired either by  the night skies of the city’s skyline or the soft hues and serene environment of the UAE’s desert landscape, with various design elements embodying one or the other. 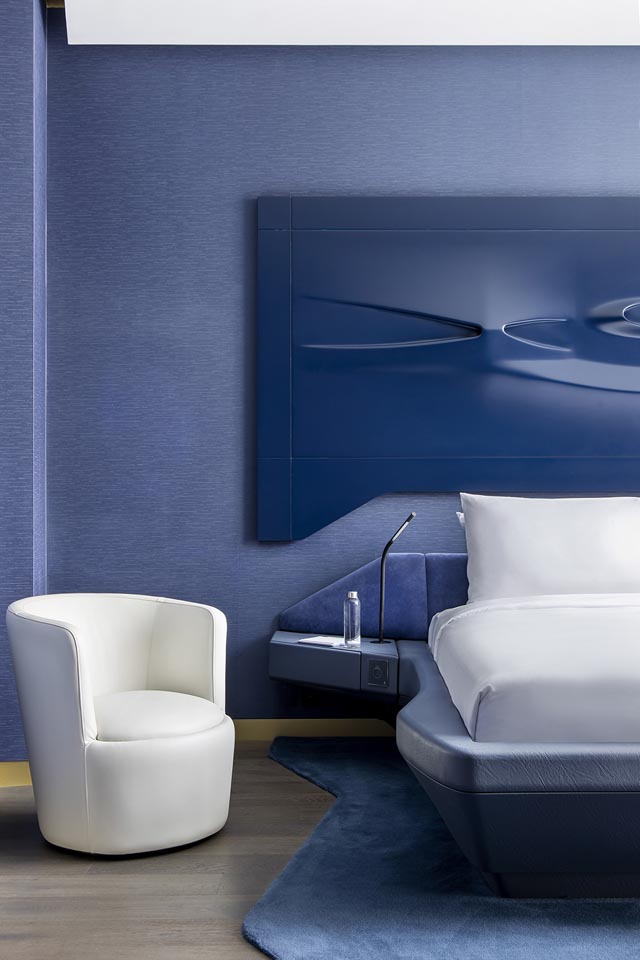 The bathrooms feature sinks and showers from Zaha Hadid’s 2015 Vitae collection for Noken for Porcelanosa, complete with over-sized showerheads and a set of curvaceous mirrors that echo the building’s central void. 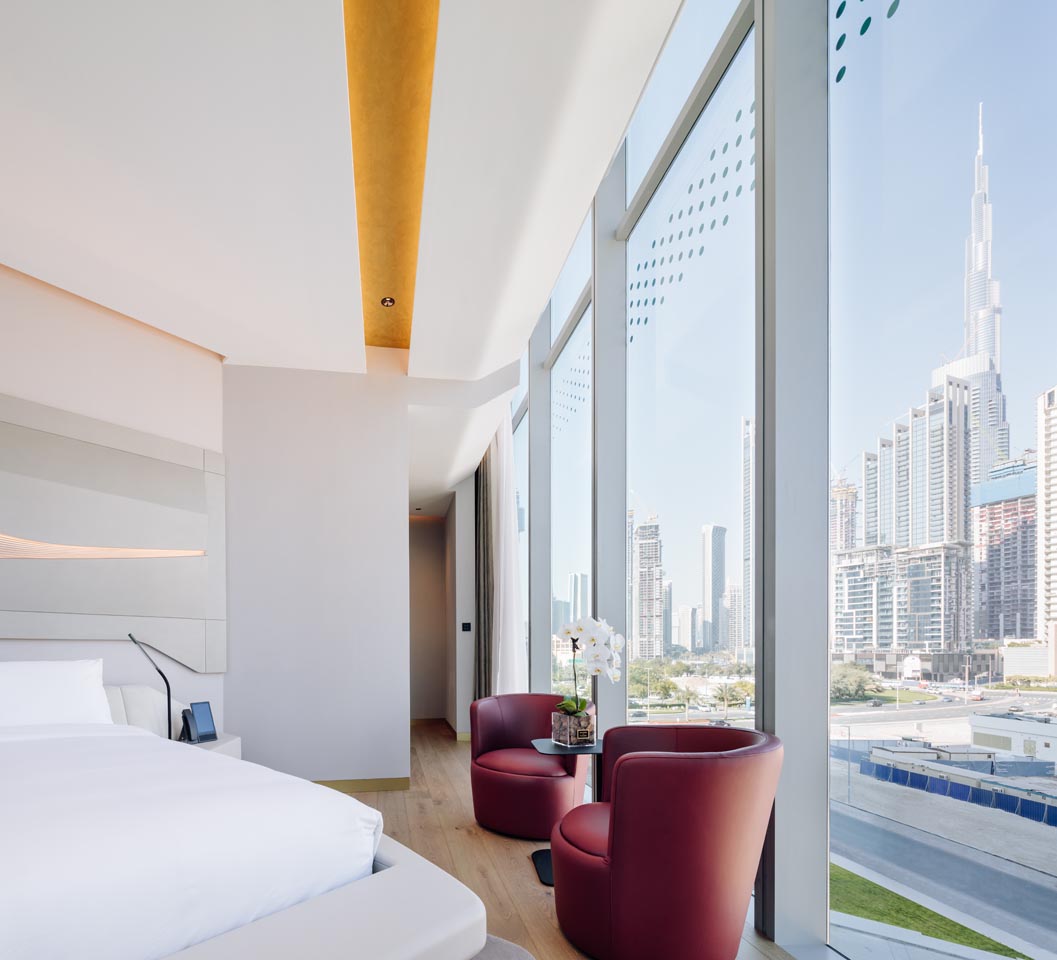 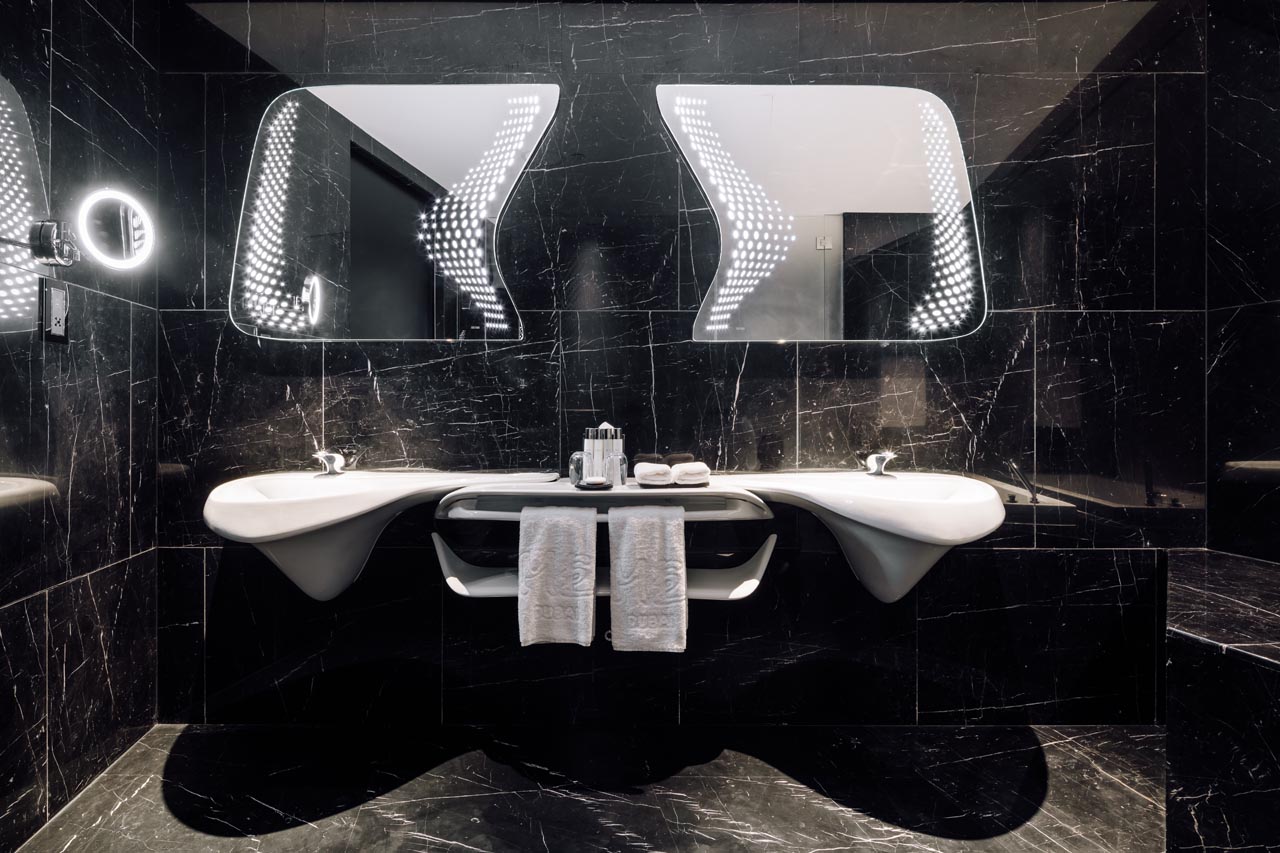 “The reopening of ME Dubai marks a historic moment for the Opus building; a true legacy project for the firm,” comments Patrik Schumacher, principal at Zaha Hadid Architects. “We’re also extremely proud to present the exclusive Zaha Hadid Exhibition within the hotel; a project that we’ve worked closely with the hotel team on to showcase some never-before seen work by the late Zaha Hadid.” 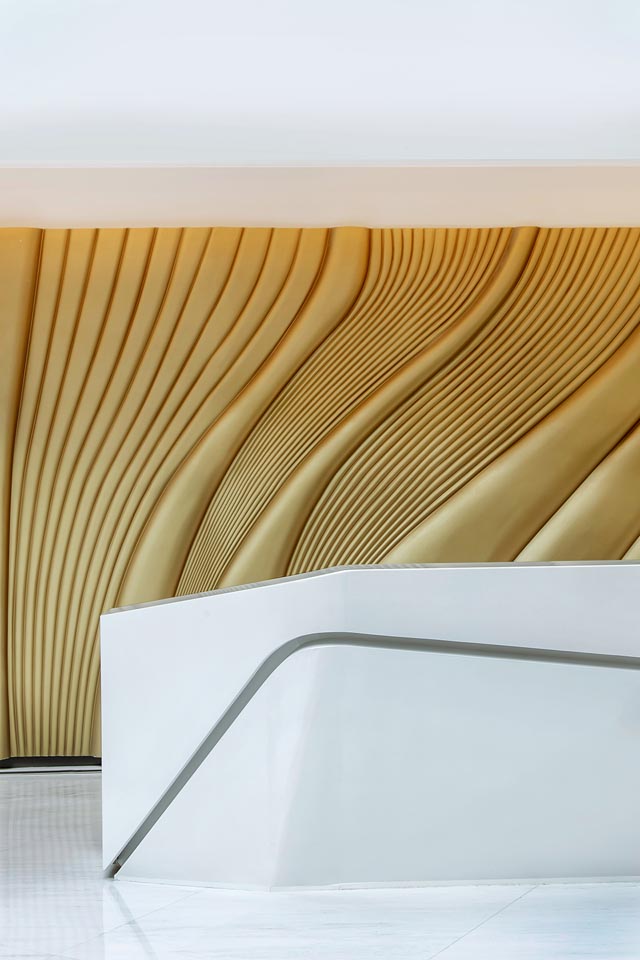 The hotel’s array of dining options includes the Latin American-inspired Deseo and the Botanica cocktail bar, both designed by Dubai-based Bishop Design. Inspired by Meliá’s Spanish roots, the hotel is also home to the Central Cosmo Tapas & Bar.

ME Dubai’s wellness offerings include a state-of-the-art 650-square metre gym featuring the region’s first Technogym Biocircuit, as well as an outdoor pool terrace and spa.

As part of Meliá’s lifestyle arm, ME Dubai aims to create a link between the city’s various communities with its Culture Collective programme that acts as a platform for showcasing contemporary culture in the Middle East, from music, art, design and fashion to gastronomy. 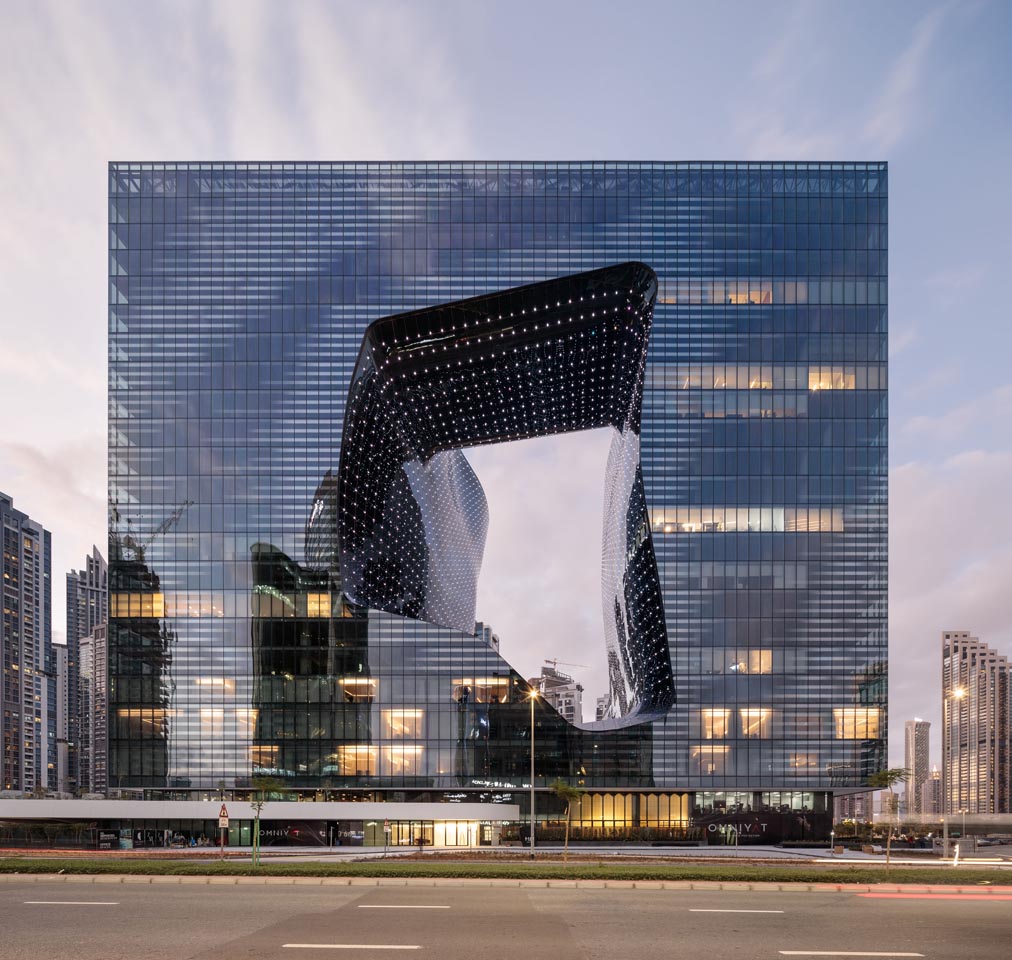 ME Dubai is the brand’s first property in the Middle East, joining its other hotel destinations including Ibiza, London, Cabo and Milan.