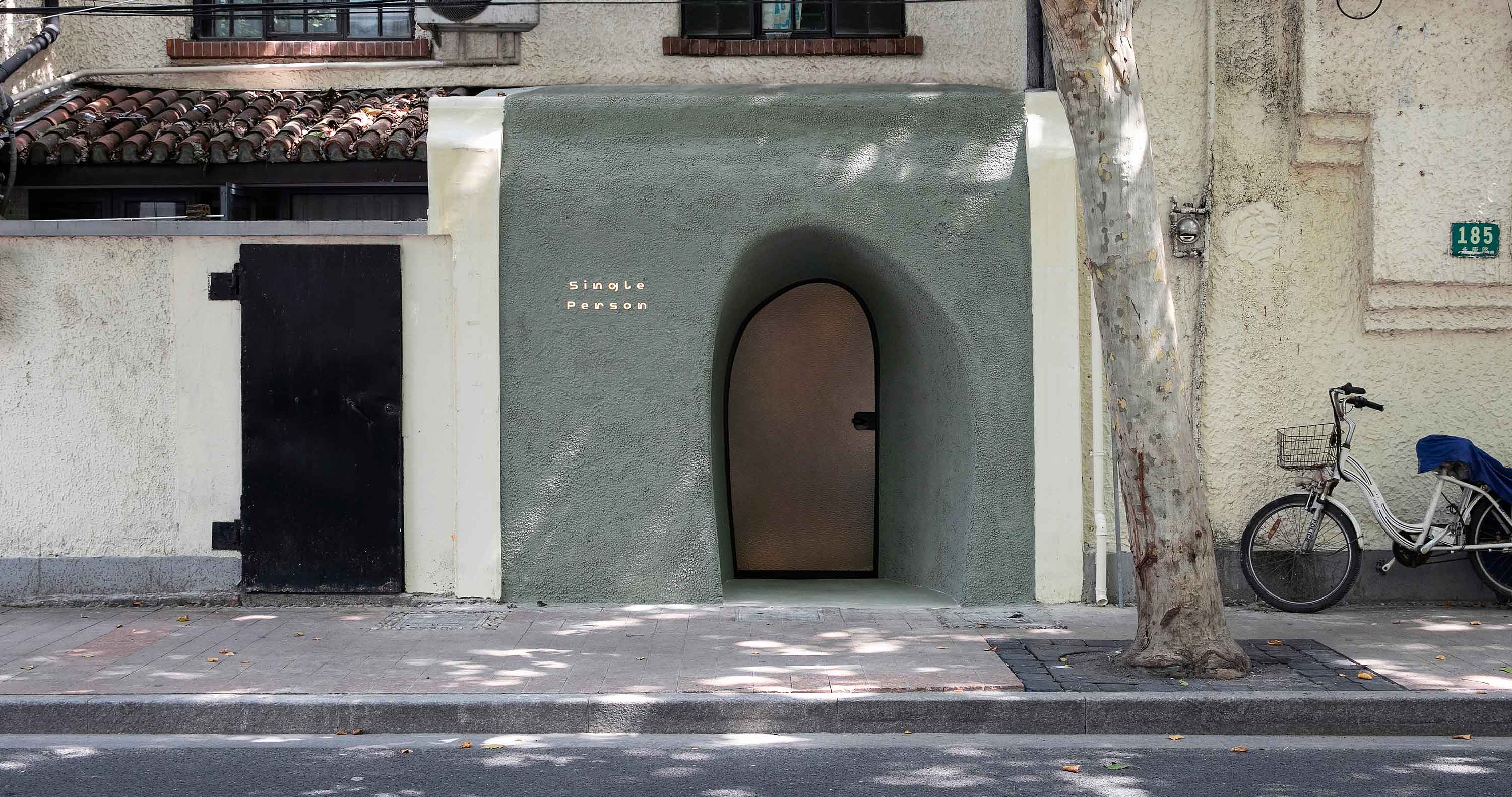 Shanghai-based architecture studio Offhand Practice have transformed a former diner into a gallery space, designed to a resemble a cave through textured walls and faux skylights. Located along a main road in the Xuhui district, a deep-set arched door, that appears to be carved into the building’s facade, invites visitors into its narrow walls and sequence of cave-like rooms. 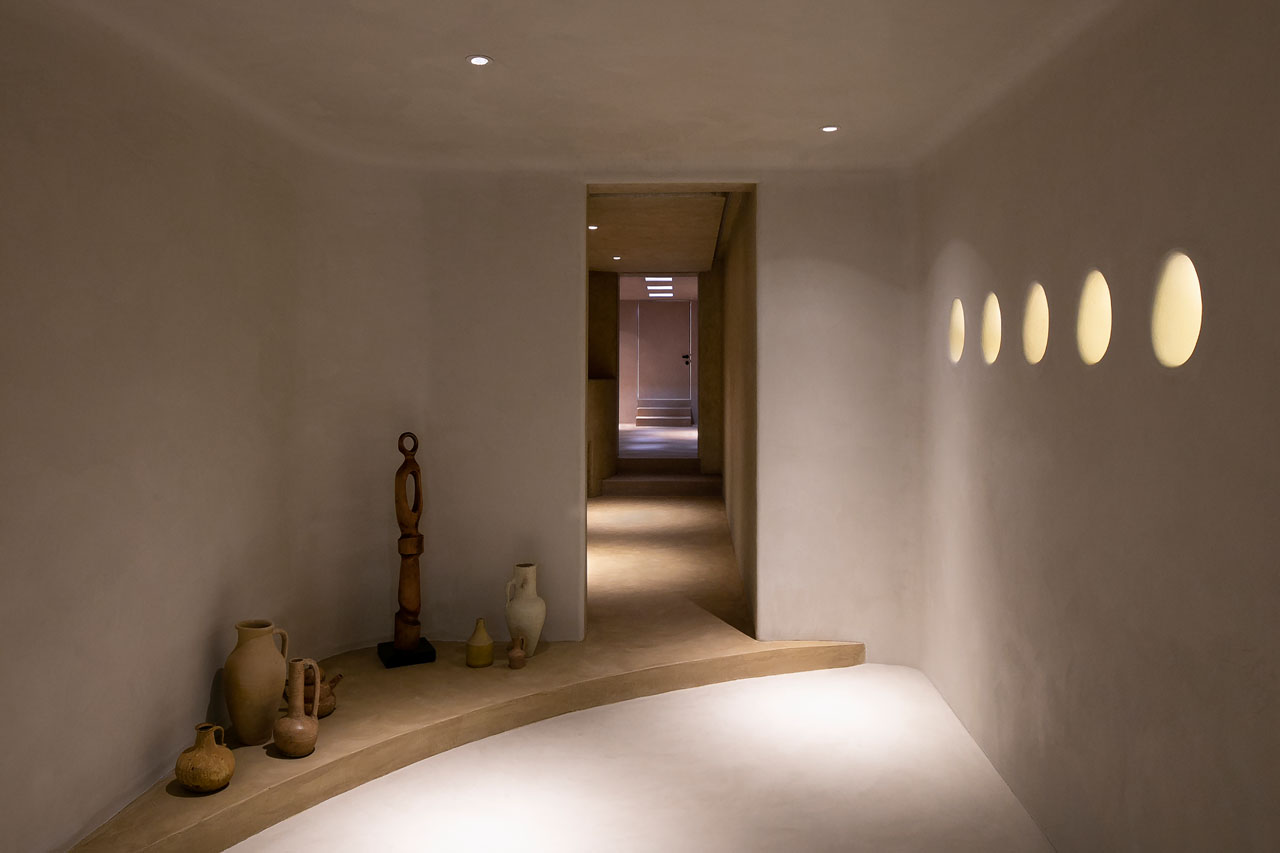 “It’s very close to the cave entrance we have imagined,” the architects said, “the texture of the facade looks similar to stucco but is actually a result of pebble wash.” 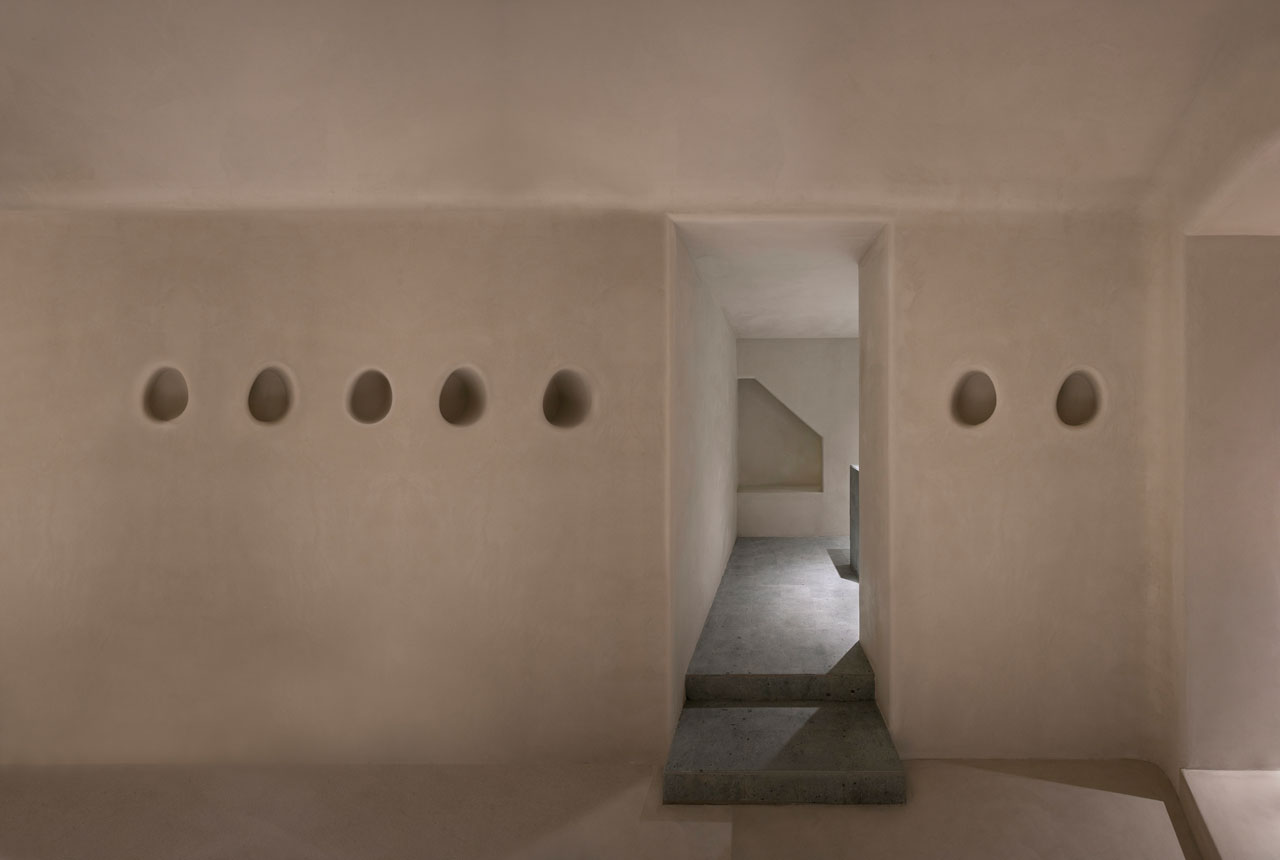 Thee studio were tasked with transforming the 60m2 former diner into a gallery showcasing vintage design objects. Upon their first visit in 2018, the team were presented with a long and narrow space that was divided into four rooms of various heights, with the only natural light filtering in from the entrance and the courtyard in the rear. “The word cave broke into our mind when we first sought to define the space as a whole,” the architects said “And because the space shares similar physicality with a cave, while we were verifying this concept, we realised that cave is not an imposed concept but manifested by the nature of the site itself. 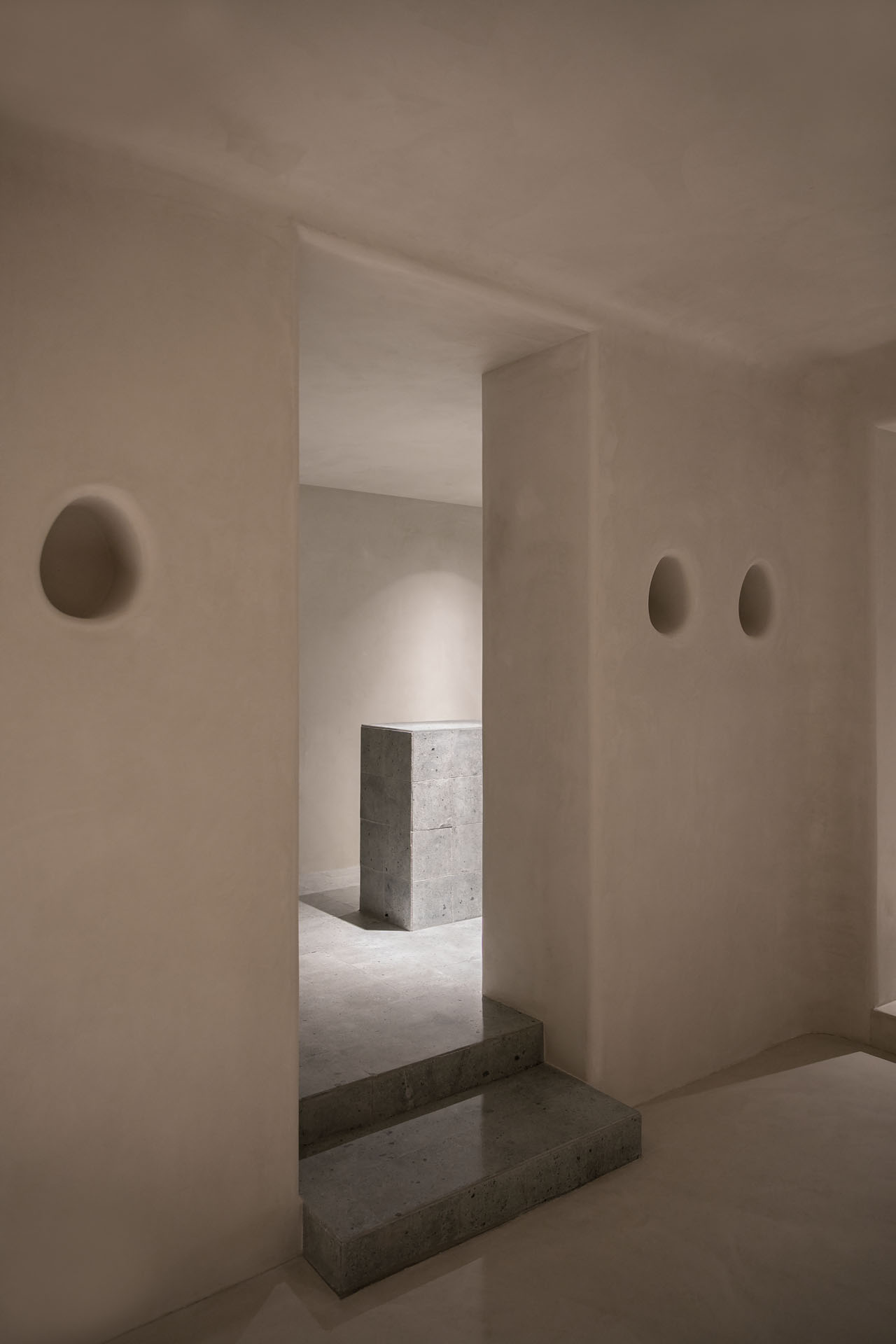 “Once the overall concept of the cave was established, other elements for this space that share the same design language naturally fell into place,” they added. 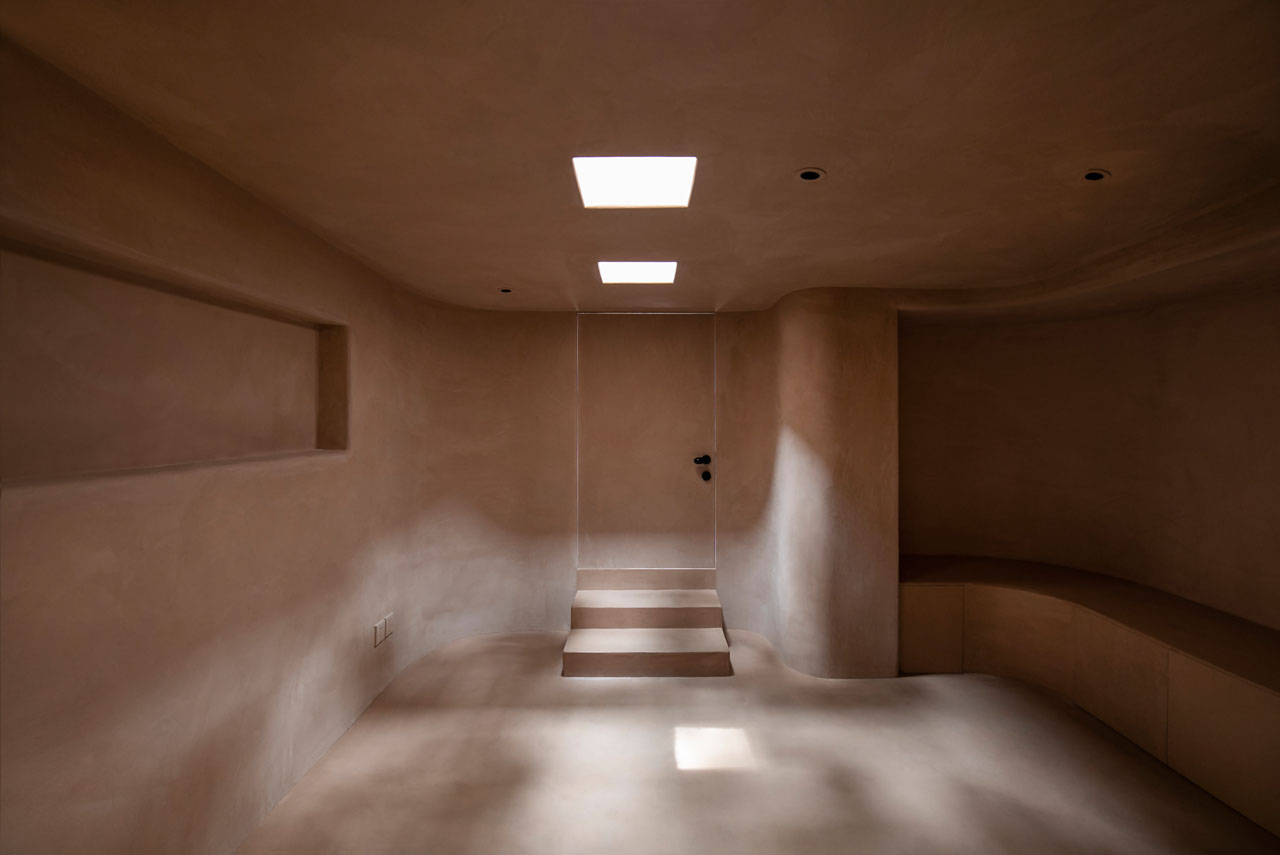 The interior space embraces the leveled floor, allowing visitors to step down into a central gallery then step up again to gain access to the spaces at the rear end of the building, mimicking the natural movement of descending and emerging from a cave. 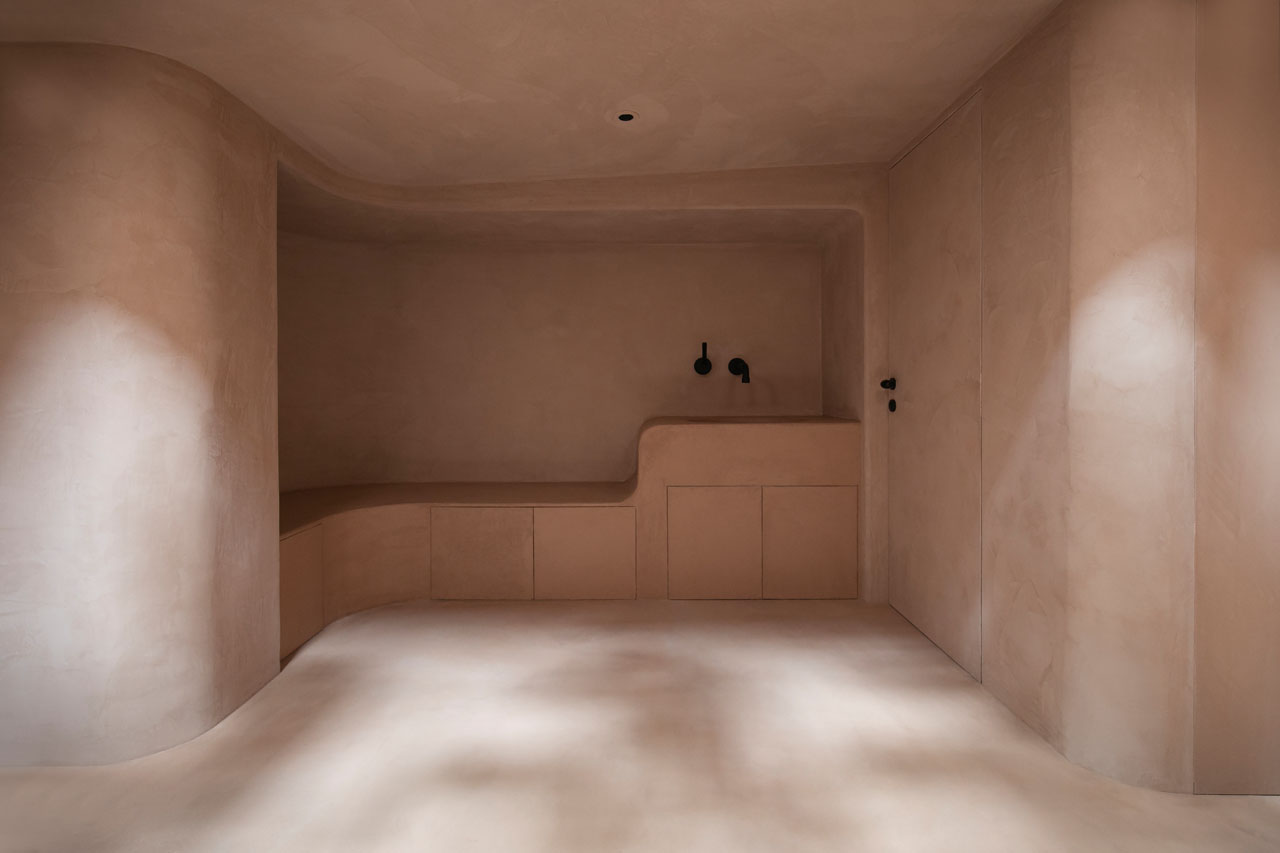 The architects further emphasised the various levels but subtly alternating each space with different earthy hues and textures. The entrance area and side gallery has been completed in a white enamel finish, while the corridor is painted in an ochre shade. A darker shade of sienna has been used for the back of the gallery. Due to the lack of natural lighting, the architecture studio created wall openings across the space to create indirect light sources while a row of small niches were carved along the wall of the central gallery to create a candle-lit ambiance. 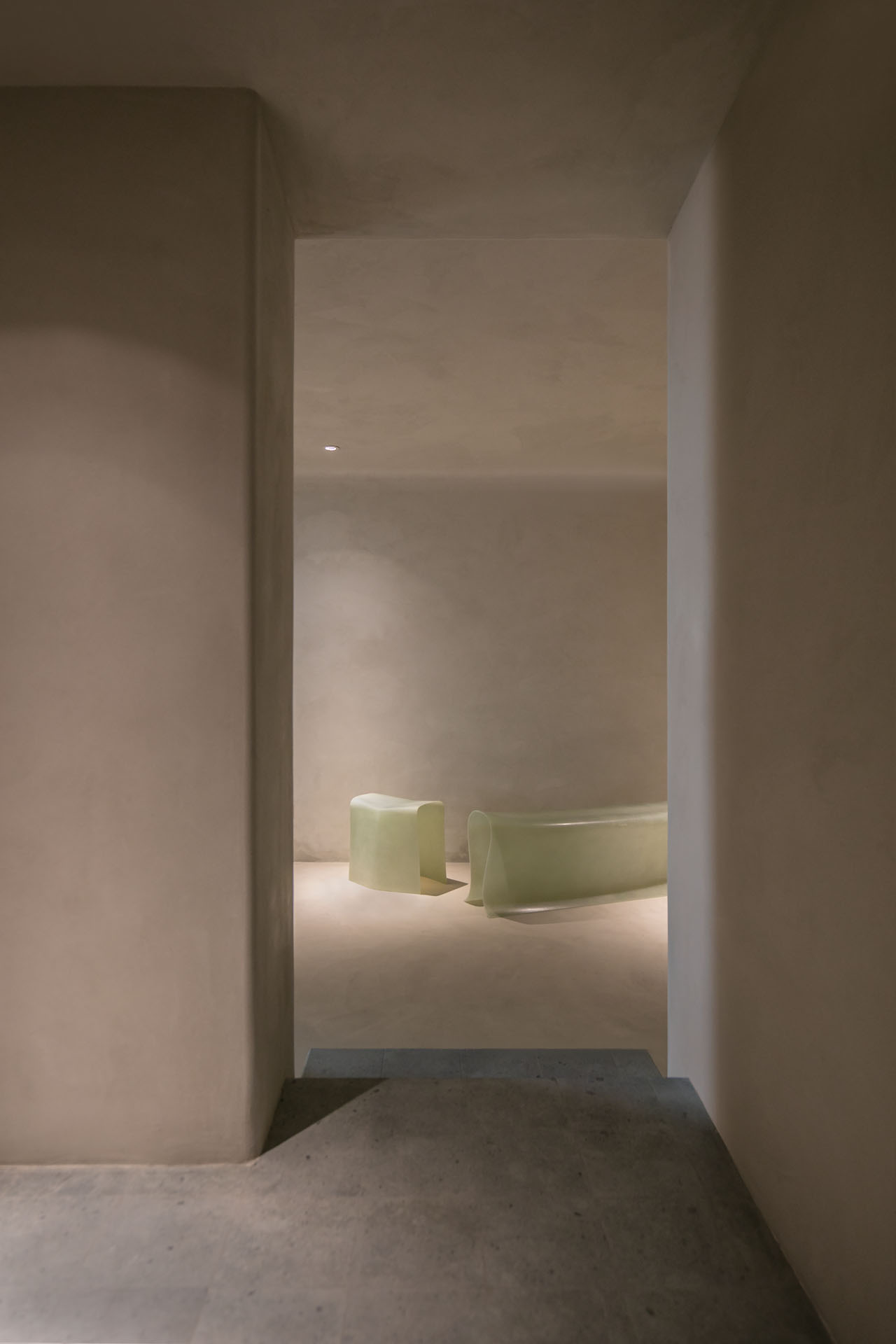 An irregular peeking window has also been punctured between the central and side gallery to allow for a visual connection between the two spaces. In the rear, a row of skylight were designed to guide visitors out of the gate through the exit, once again mimicking the natural manner in which light penetrates through thick cave walls. The walls feature built in curved plinths, shelves and platforms to exhibit various design pieces, while pebble-shaped ceramic door handles sourced from a Berlin flea market have been used throughout the space. Curved plinths, shelves and platforms have additionally been built into the walls of the exhibition spaces to present design pieces. Adding to the cave theme, pebble-shaped ceramic door handles that the studio sourced from an antique flea market in Berlin were used throughout the space.