HomeDesignFurniture Design: A move towards the sustainable, the ethical and the handmade
DesignFeatured

Furniture Design: A move towards the sustainable, the ethical and the handmade

How is the furniture industry reacting to social, environmental and ethical change? 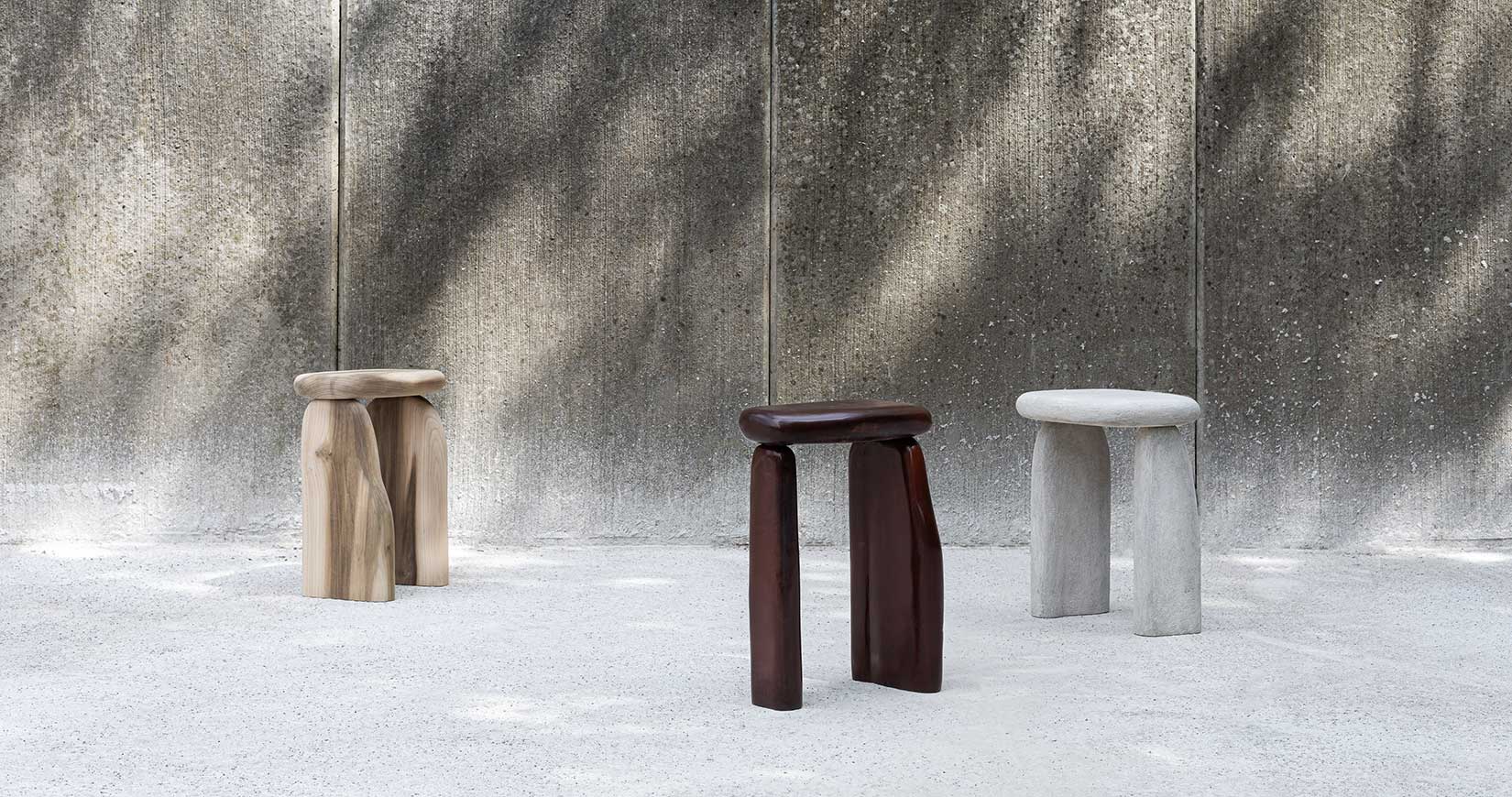 The past decade has borne witness to several poignant movements in furniture design principles and above all, seen a shift in the relationship with materials, from the design itself to the manufacturing process. We anticipate exciting new scenarios in the future where materials will gradually and proudly reclaim their central role in the creative process and begin to dictate form rather than adapt to it. We are confident that this evolved movement of material amalgamation will allow empathetic new designs.

Here, we will explore a new generation of designers who are experimenting with materiality and the manufacturing processes with a specific focus on the power of the material and how the slightest sense of touch can convey emotion and energy. This neo-materialist movement reasserts centuries-old beliefs that materials have a force of their own and exude an energy that can be genuinely felt.

These findings offer insight into how designers are giving shape to materials and processes, from reviving ceramics and recycling waste to social inclusion and growing matter. Their conscious philosophies are already changing the world by allowing consumers to have careful and considered choices that can ultimately reconnect us to nature and guide us towards a better tomorrow.

Besides looking at emerging and established designers that have led the change in material exploration in the past decade, we will also be exploring new makers in contemporary design and preview a future in responsible production, circular thinking, ethical practice and organic aesthetics.

A movement I call ‘contextualising organic rituals’ is influenced by ancient Japanese Buddhism principles where all things are considered as rising from nowhere, evolving and disappearing into nothingness. Here, nothingness is translated into potentiality where things can grow and eternally change, never reaching their absolute. This wabi-sabi principle is well-known and typifies a mindful approach to life.

Humans like to retreat into places where they feel protected from harsh realities, creating environments of serenity and beauty. Room dividers are making a comeback, as are smaller tables and stools to share meals with loved ones; scenarios that are elegant and moody, illuminated by lanterns and overseen by glorious orchids. Woods are dark or lacquered, while stone is inky and polished, and brass is deep and mysterious as it reflects measured splendour. Teacups, spoons and trays are dedicated to the chosen origin of each tea. The dress code is sophisticated yet casual, where pyjamas are paired with vibrant kimonos and housecoats are worn over vintage dresses, allowing us time to drift into a world of fantasy.

Harmony and fluidity replace statements of starkness and contrast. The warm hues of brown harmonise with soft pinks and blushes, creating warmth and a feeling of home. Cold, dark backdrops with bold floral designs retreat with haste as clashing juxtapositions no longer resound.

Deep colours of terracotta are making a comeback in contemporary decor and design palettes; the tones promoting gentler and earthier feelings, contrasting the coolness of the blacks and greys that we have grown accustomed to and which have dominated our horizons for decades.

Economic crisis, border restrictions and environmental devastation have made us relook at labour across the world where we are witnessing a resurgence of beautifully crafted design that is somewhat utilitarian in appearance. Humans are re-exploring and returning to their roots and increasingly embracing and valuing the human involvement and craftsmanship, even in this fast-paced era of Artificial Intelligence.

Curators and designers are returning their focus on craft-led production, new modes of social consciousness, and environmental action, creating a renewed sense of resourcefulness and essentialism. In the late 19th century, the Arts & Crafts movement was a powerful knee-jerk reaction to the rampant advancement and detrimental impact of industrialisation. Practitioners like William Morris advocated for a revival of skilled labour, a nature-inspired aesthetic, and social reform. In the mid-20th century, writer Victor Papanek criticised frivolous, style-driven design in favour of ecological accountability.

At the turn of each new century, people return to art. At the start of the 21st century, the discipline returned to hand creations. This became the remedy to the disconnected nature of the industrial design. However, a connection to technology and mechanics remained where designers began hacking printers and reconstructing processes, inventing bespoke half-manual, half-automated machines. It is a beautiful period in which man and machine began working hand in hand.

The design world needs to stop its dependency and acceptance of recycling as a viable solution. Besides moving away from mass-produced, single-use plastics, products and material exploitation, enterprises and designers must build strong associations, foster partnerships and facilitate collaboration within local communities. In other words, we need to redesign the entire system.

Ethical Design Thinking is a methodology that encourages designers to focus on human-oriented values throughout their design process. It consists of five exercises, created to bring together designers, researchers, engineers, governments and other stakeholders to discuss a shared ethical goal.

Although some may consider themselves to be ethically driven, many fail to actively consider human-oriented values when creating products. Intelligent nations also fail to recognise the physical, psychological, and emotional repercussions of such products.

When scientists measure environmental impact, they have to take into consideration air, water, land pollution, cleanup costs, extraction impacts, energy consumption, direct and indirect effects, off-gassing, impacts on plant and animal life and the human quality of life. This list is seemingly endless and exhaustive. Everything is interconnected, and an accurate calculation is virtually impossible. This is why designers need to start questioning the sustainability of their work.

There is also the ethical issue of whether the things we are designing need to exist. The life cycle embedded within each object is often longer than most people’s lifetimes. ‘Is it necessary?’ is the first question that every designer should ask of themselves.

We are already seeing corporate giants like IKEA running tests on how best to use recycled materials that could help startups develop recycling technologies for markets that demands products that are low waste and ‘sustainably-sourced’.

Designers have the world as their platform where they can showcase and express innovation. They have the propensity to open people’s eyes to the fact that we are losing our planet. People know that they need to rapidly slow down or halt the pace of overconsumption and overproduction. As a result, designers are morphing into activists, inventing systems that encourage shifts in existing values. It is a new era that offers hope and a renewed perception of ‘success’.

The circular economy is an alternative to the traditional ‘take–make–waste’ model of production and consumption. It is one that affords hope in the face of environmental catastrophes, from climate change to ocean plastic. Design is integral in the shift to a circular economy.

Designing-out waste and pollution, keeping materials and products in use, and regenerating the natural environment is crucial to contemporary design and has to be a conscious and inclusive part of every thought process. In nature, materials flow in circles. Things grow, die and return to the soil. Then the cycle begins again.

Humans practice a more linear model in which ‘we take, we make, and we dispose of’. As a result, landfills are ceaselessly growing and creating countless negative impacts on the planet.

Circular design means that products and services no longer have a lifecycle with a beginning, middle and end. This challenges designers to create products that can be ‘made to be made again’. These forward-thinking designs will increase value and result in less waste.

Transitioning from a linear economy to a circular one will not be easy; the new mindset will challenge us all. However, this concept is already on the rise, and according to the Ellen MacArthur Foundation, it is predicted to become a trillion-dollar business. Designers lead the way in re-configuring the world by developing solutions that are invaluable to people, giving businesses a competitive edge, and are regenerative for our world. We are living in a moment of evolution where it is necessary to rise to the challenge and intrinsically make amends.