Born and raised in the UK to parents from East Africa and Pakistan, architect Asif Khan has scoured the world, east and west, past, present and future in search of novel ways to make his indelible mark on Expo 2020. Through his unique, majestic carbon fibre Expo Entry Portals, visitors will enter into a mesmerising landscape that sets the scene for the adventure ahead.

“The first thing that I did when I came to the site was to take off my shoes and walk in the desert sands. I wanted to be immersed and to feel, touch and smell it personally,” recalls Khan.

Talking to identity magazine, the renowned architect reflected on the profound effect that his role working on the architecture for Expo 2020 has had on him.

“Growing up in the UK, my architectural heroes were people like Le Corbusier and Louis Kahn, [and so] this experience has been a personal journey in self-discovery. I have been discovering my roots and a renewed respect and appreciation of the great architectural civilisation associated with the Middle East and North African region.

“This project has defined me as an architect and will continue to influence the work that I do. It has been a connection of people and minds – the precise message of the Expo 2020,” says Khan, who received an MBE for his services to architecture in 2017.

“I have never worked on such a big project before. This is a new scale of work, and it has been hugely impactful,” he adds – who is also currently working on the impressive multi-million-dollar Museum of London, along with Stanton Williams and Julian Harrap Architects.

“I have also connected with the work of great architects from past Expos – like Joseph Paxton, the architect of London’s Crystal Palace, or the architects of the Eiffel Tower. We [society] continue to talk about their Expo masterpieces. I continue the spirit of the Expo and have a responsibility to add to that narrative,” he says.

For the past three years, Khan and his eponymous studio have been working on this mammoth project, which spans some six kilometres and encompasses a vast scope of work, from the Entry Portals to the landscaping, seating, wayfinding, shading and lighting…

His pride and joy, however, remains the three gigantic carbon fibre and resin Expo Entry Portals, through which every visitor will pass and which he calls his best work ever.

The portals were made in Germany by Haco, the only firm in the world able to manufacture the carbon and resin strands so finely while maintaining the required strength and safety standards.

“Formed of a series of translucent 2D planes, the repeating geometric patterns are layered to form a complex 3D design.

“As the design plays with the concept of light and shadow, the airy structures will look different depending on the time of day,” explains Khan.

He adds: “Viewed from the correct angle from the side, the portals’ profile resembles the Expo 2020 logo.”

“Until now an Expo has never been held in this part of the world. We sought to create a major impact with the portals, which usher you in and out of a multi-sensory impactful journey,” he says.

“We sought to create architecture and elements that would speak to the past and the future at the same time. We want to speak to the world with pride about what the region is about,” he adds.

Working in collaboration with Lara Captan, an Amsterdam-based Lebanese typographer, Khan created a unique network of 50 benches throughout the Thematic Districts.

“The words, written in Arabic, wrap the site like a poem,” he says.

Social media channels were used to crowdsource the words, while a final selection was made by 30 Emiratis. The benches are made from different materials depending on the meaning of the word; for example, hammocks symbolise the word ‘dream’, and the bench that forms the word ‘vision’ is made of clear acrylic. According to Khan, the meaning of the words – regionally, internationally and locally – were taken into consideration during the selection process.

The traditional Emirati ‘Sadu’ weaving technique is being incorporated into a variety of majlis-type seating areas and in wayfinding signage.

Similarly, Khan has fine-tuned the design of the Expo drinking fountains, in partnership with UAE-based designers from Architecture and Other Things Studio and duo Alia Bin Omair and Faissal El-Malak, winners of the Art Jameel design competition. A total of 53 fresh drinking water fountains will be strategically placed around the site to provide refreshments for millions of visitors. Later in the legacy phase, the fountains will be used by athletes on the purpose-built running track.

The London-based team devised a series of linear tracks, which will each have different surfaces, ranging from grass to gravel, depending on the intended use. They will include buggy lanes to create a varied landscape while making sure that the surfaces are also functional.

Local plants and grasses are incorporated into the landscaping, with the concentration of fragrant ones close to the main gates. Khan reveals that they have also used synthetic grass, which is more practical and sustainable due to the size of the grounds.

In terms of hardscaping, Khan opted to use different patterns which also act as decorative yet functional wayfinding elements. Pictograms based on Arabic typography draw from the Expo 2020 font used on signage, doors, etc.

Khan also designed some specialised light fixtures and a ‘Light Colour Programme’ connected to the circadian rhythm. Lighting in the Public Realm will be subtle and mood-setting.

In harmony with the overall concept, shading columns have been coloured the exact shade of the indigenous ghaf tree trunk.

“This project helped me to find a voice – before, I’m not sure if people knew where to place me.”

Khan’s past projects include the ‘Mega Faces’ pavilion at the Sochi 2014 Winter Olympics; the Coca-Cola ‘Beatbox’ at the London 2012 Olympics and a summer pavilion for London’s Serpentine Gallery in 2016.

Some of the most revered architectural practices in the world – including Grimshaw Architects, Hopkins Architects, Foster + Partners and Adrian Smith + Gordon Gill Architecture – have also designed impressive structures on the 4.38-square kilometre Expo 2020 site. 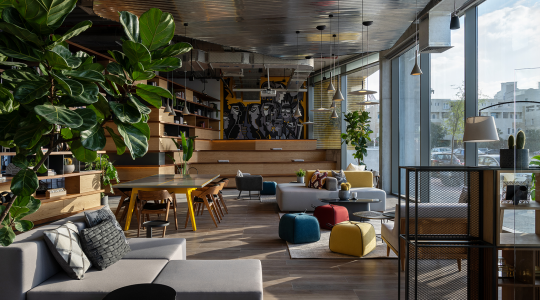 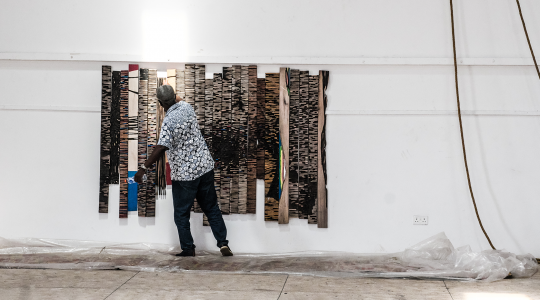